I moved from Nairobi proper to an inn on the outskirts, a district shown on the map as “Karen.” It brought me closer to some of the things I wanted to see, and – not to be overlooked – it cost less than downtown. The inn’s name was the Karen Inn, named for the neighborhood that was named for the author, and, while not as upscale as the hotel in downtown, the Karen Inn was comfortable, with a nice garden, and the staff was terrific.

Karen Blixen wrote Out of Africa, the book from which the movie, starring Meryl Streep and Robert Redford, was made. The movie contributed significantly to my desire to visit Africa – the scenery was beautiful and the African culture was intriguing. And here I was, right in her neighborhood.

Karen Blixen’s full name was Baroness Karen Christensen von Blixen-Finecke. She was a Danish author, who lived from 1885 to 1962, 77 years. “Isak Dinesen” was a pen name, one of several that she used in her writing.

Her husband was Baron von Blixen-Finecke, a Swedish man she married in January, 1914, in Mombasa, Kenya. They had been engaged in Europe, he came first to Kenya, then she arrived in January. They spent 1914-1917 on a small farm called M’bagathi, and they bought the coffee plantation that became famous in 1917. The Baron and Baroness separated in 1921, and Karen stayed in the house until 1931, when she returned to her family’s home in Denmark.

Timing is everything. While the climate was not ideal for growing coffee, the business was not helped by the Baron’s spendthrift ways. He ran up debts against the plantation, which were left with Karen. During 1915-1918, there were periods of severe drought that significantly reduced yields. As if those were not enough, World War I was declared in August, 1914. Battles were fought in East Africa, consuming local workers and supplies, and in 1917, Britain banned the import of coffee.

Out of Africa told the story of her years in Africa, including her partner, Denys Finch Hatton, who was killed in a plane crash. The story was published in 1937, one of two memoirs about Africa, the other being Shadows of the Grass.

The house was given to Kenya by Denmark in 1964 as a gift on the occasion of Kenya’s independence. The museum was developed about twenty years later, after the movie was released and became very popular. It opened in 1986. The house was not used in the film, however – filming took place at M’bagathi, her first farm house.

The Karen Blixen Museum sits on a corner of her former coffee plantation, situated in what is now an upscale suburb of Nairobi, a town created by subdividing the plantation after Karen had returned to Denmark.

The museum consists of her house and furnishings, mostly original, but some are props from the 1985 movie. There is little natural light in the house, because of the thick walls and small-ish windows – Kenya is a hot country, and cooling depended on fans. There are a few letters framed, and artifacts such as clothing that belonged to Karen and her lover. There is a small, paved sitting area in the back, with a millstone table, and it is easy to imagine them sitting outside in the relative cool of the evening, talking over a glass or two.

As an aside, a New York Times article, written shortly after the museum opened, talked about Denys’s death and burial. Karen took great pains to honor his desire to be buried near his house, and, yes, lions really did lie across the flagstones that covered his grave. But also of interest, was the author’s mention that Denys Finch Hatton was responsible for getting five thousand square miles of what is now Serengeti National Park named as a game sanctuary in 1929.

Some of the original coffee equipment is at the museum, part of a display about how the coffee beans were processed and prepared for shipping. The grounds have been kept simple, but suitable for a wedding or other entertainment, and the museum helps support itself by being available for those kinds of occasions. There is a small gift shop that sells copies of her books, postcards, and local craft items, and when I was there, there was a local artist painting and offering his paintings for sale. 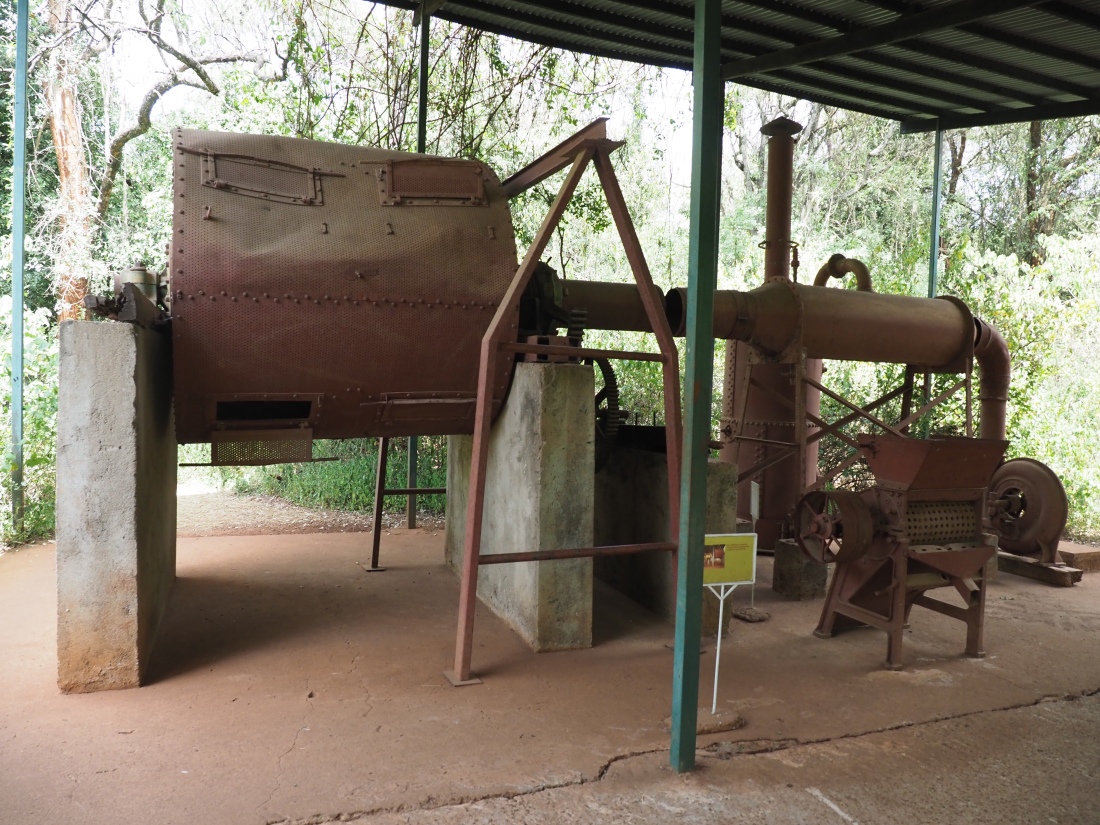 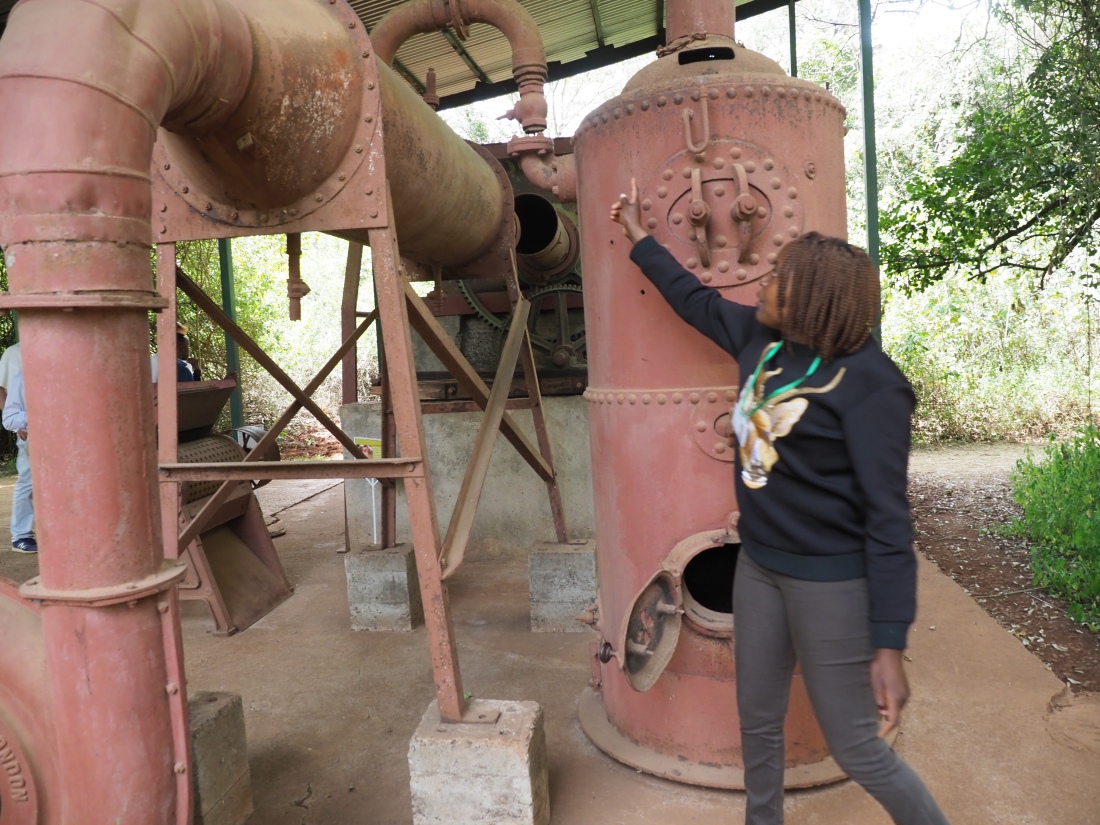 From coffee, I moved to tea, visiting the Kiambethu Farm in Limuru, about an hour’s scenic drive from Nairobi. I was an hour early, having allowed plenty of time for turning the wrong way.

Fiona Vernon, the owner of the farm, happened to be in her garden, which I was admiring. Technically, the farm was not open yet, but as often happens – because I do not look very fearsome – she invited me to enjoy the garden while she was getting ready for a full house at opening.

I miss having a garden, so I was quite content to wander around. 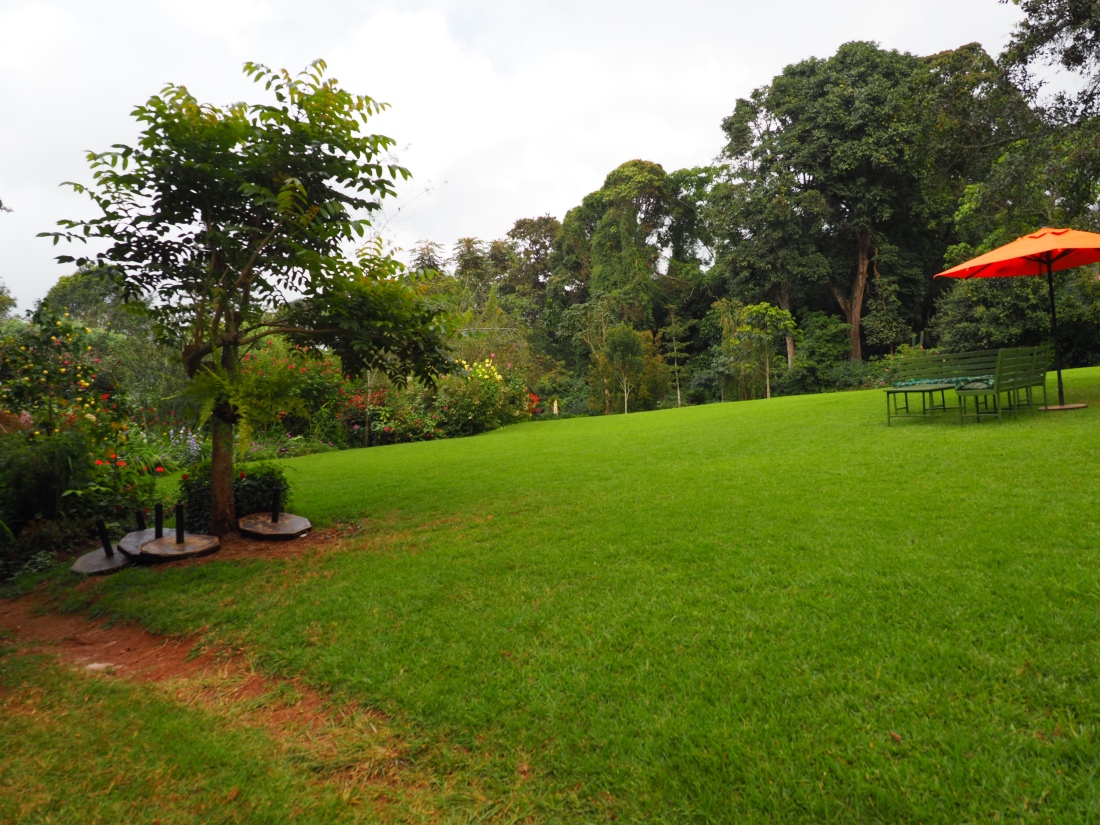 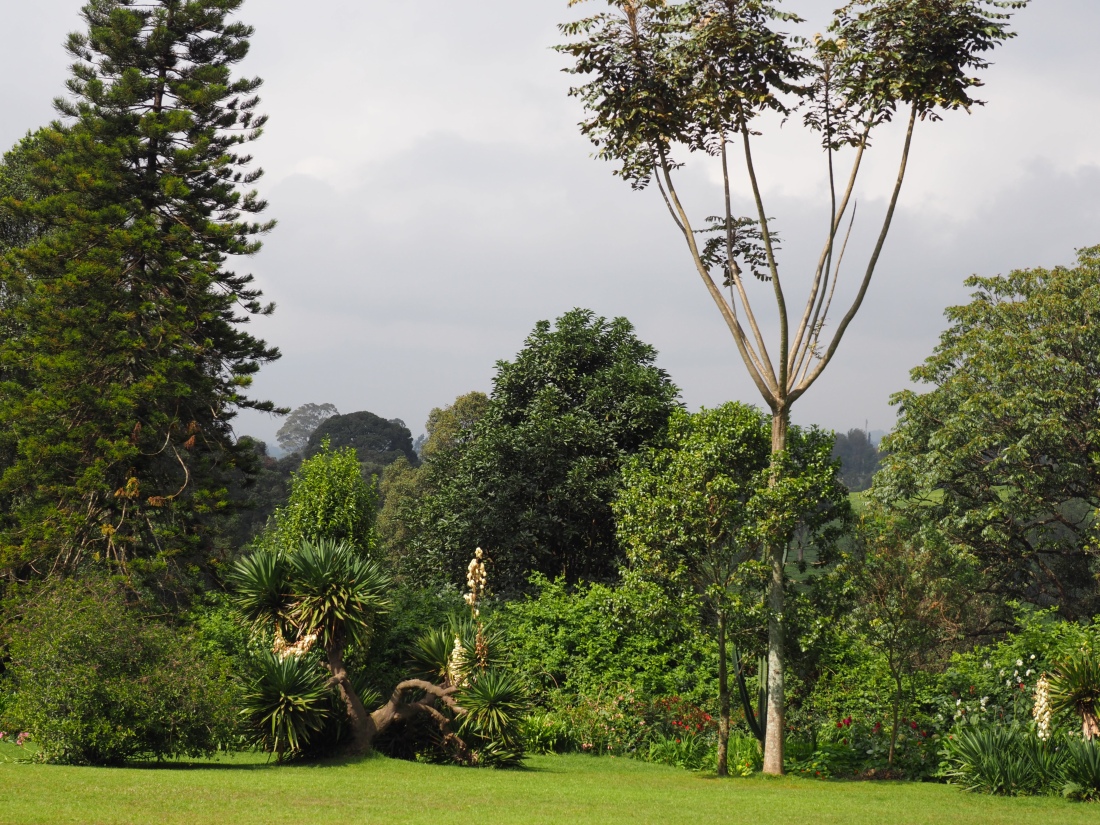 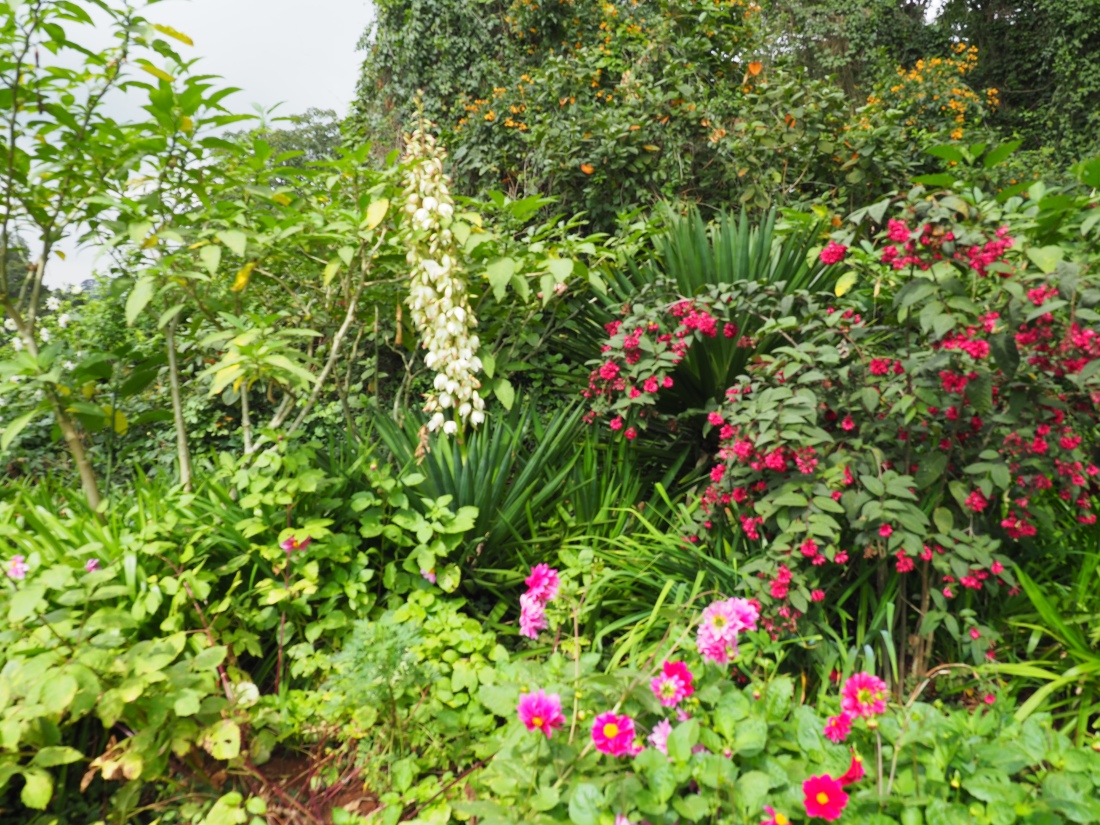 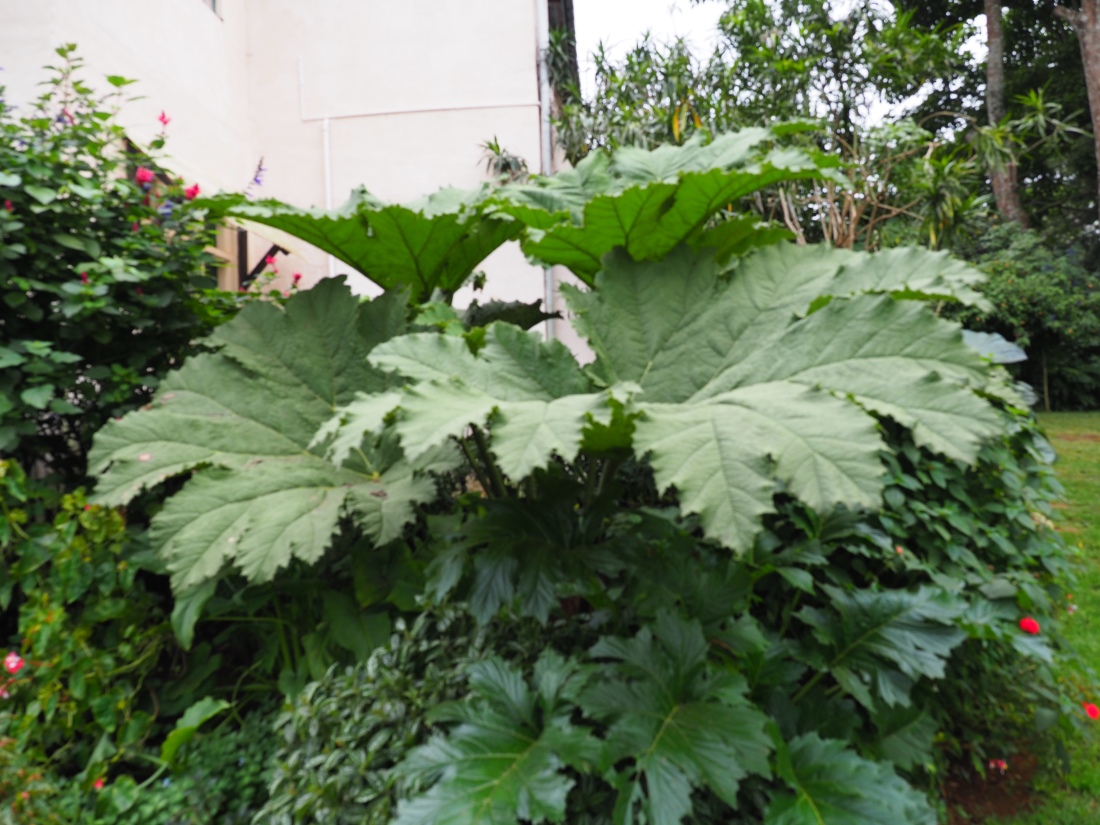 Other people began to arrive. Shortly, Fiona reappeared to welcome the group, and we followed her down the hill to stand beside the tea fields, which I heard alternately called “tea fields” and “tea orchards.” A tea plant is “Camellia sinensis.” “Camellia” translates literally as “tea bud.” All real tea (as opposed to herbal “teas”) come from this plant. 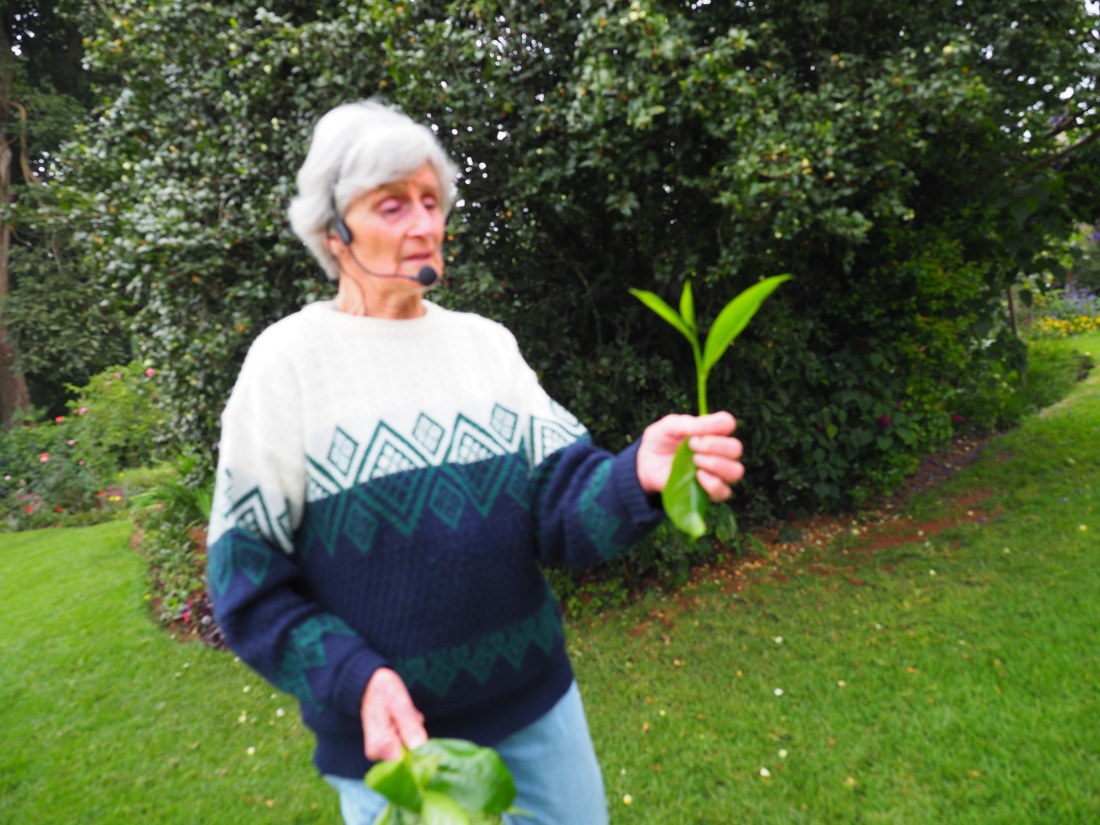 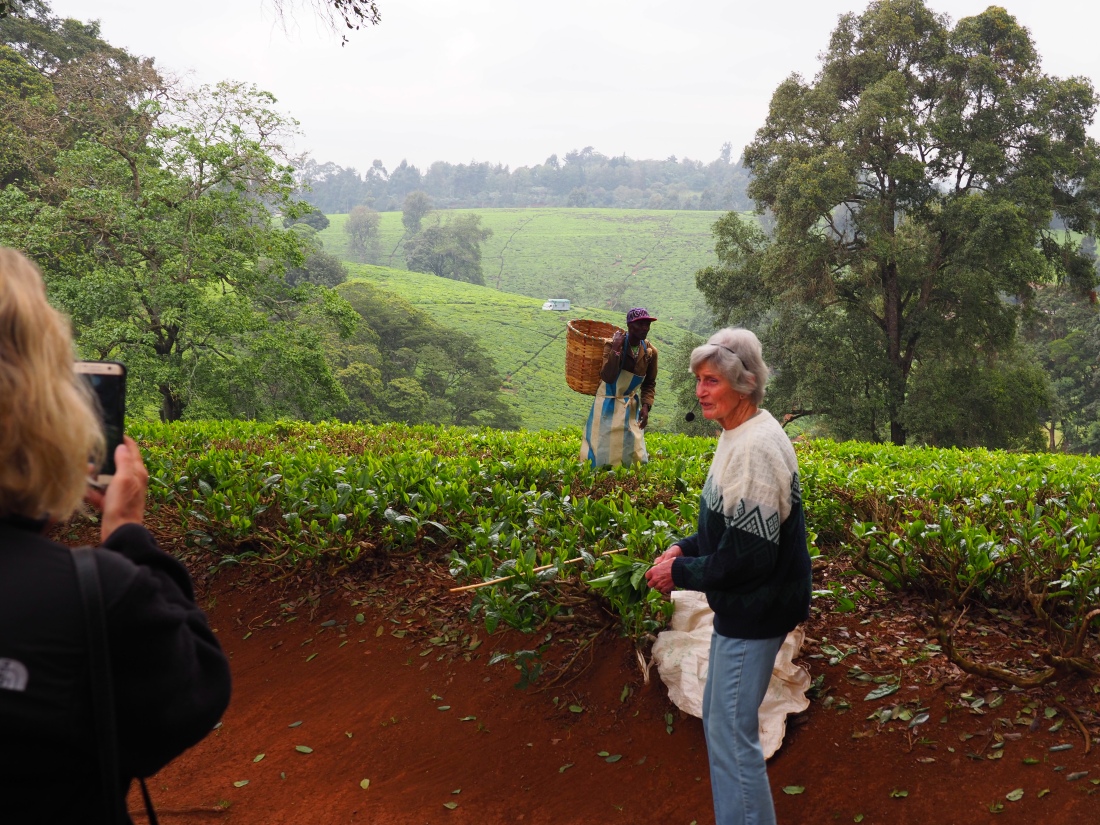 Fiona explained that care had to be taken in picking tea leaves. They have to be perfect, she said. Blemishes will cause the processing plant to refuse them, and if there are enough in the initial inspection, the entire truckload of bags might be refused. Speed is necessary to minimize oxidation, which is the general degradation of the leaves after picking. Oxidation is used during factory processing, but it is under controlled circumstances.

The workers use baskets, carried like a backpack, to pick the tea leaves. Because of the care needed, it takes time for a person to become speedy, but eventually, they can pick very quickly.

When their basket is full, they bring it to a central sorting area where the leaves are inspected, and then the leaves are dumped into large cloth bags for the trip to the processing center via truck.

The tea leaves are picked, inspected and picked over at the farm, and delivered to the processing plant the same day, every day, sometimes twice a day during the season. The daily picking takes the top leaves, about two inches. The pickers move from one field to the next, after its readiness has been determined. Having just the top leaves picked keeps the tea bushes at a uniform height, which, when added to the bright green of each day’s growth, gives the fields a very distinctive look. 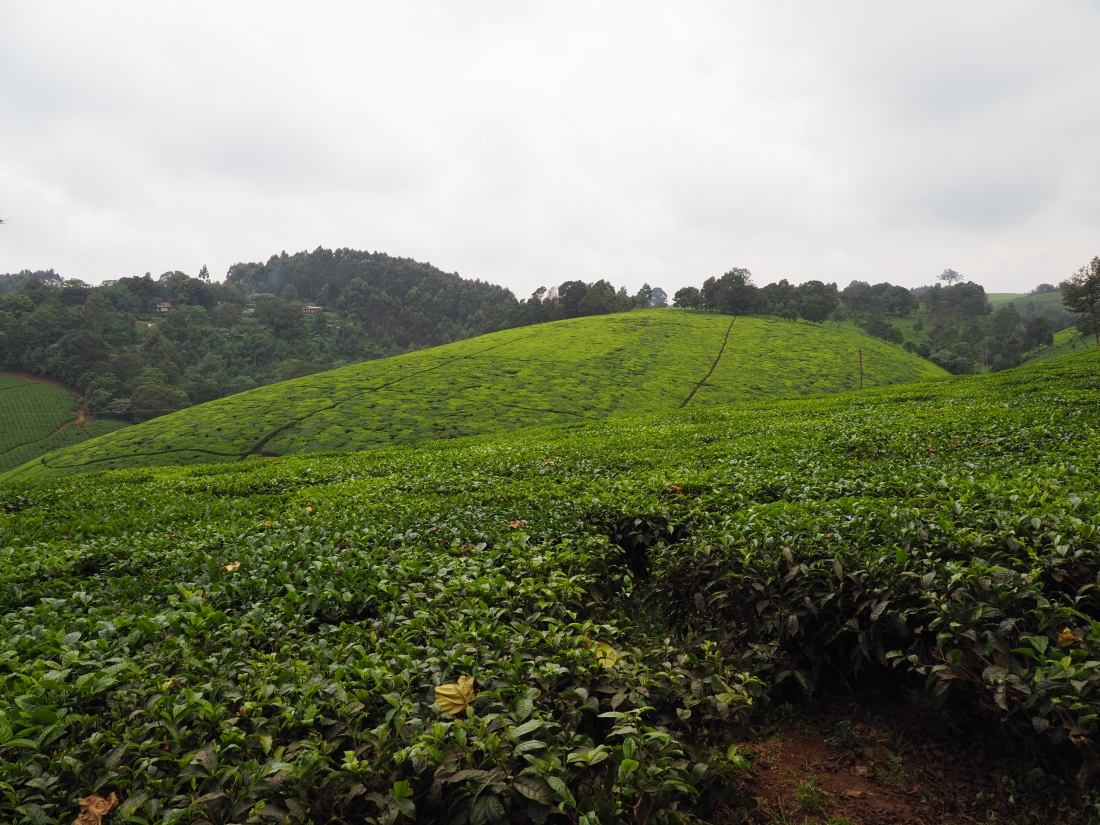 Fiona led us back to the house, where we were served – what else? – tea and cookies, while Fiona talked about tea, life on the plantation, and how she came to be here again. She had moved back (escaped) to England as a young woman, but changes in family circumstances brought her back to manage the plantation. 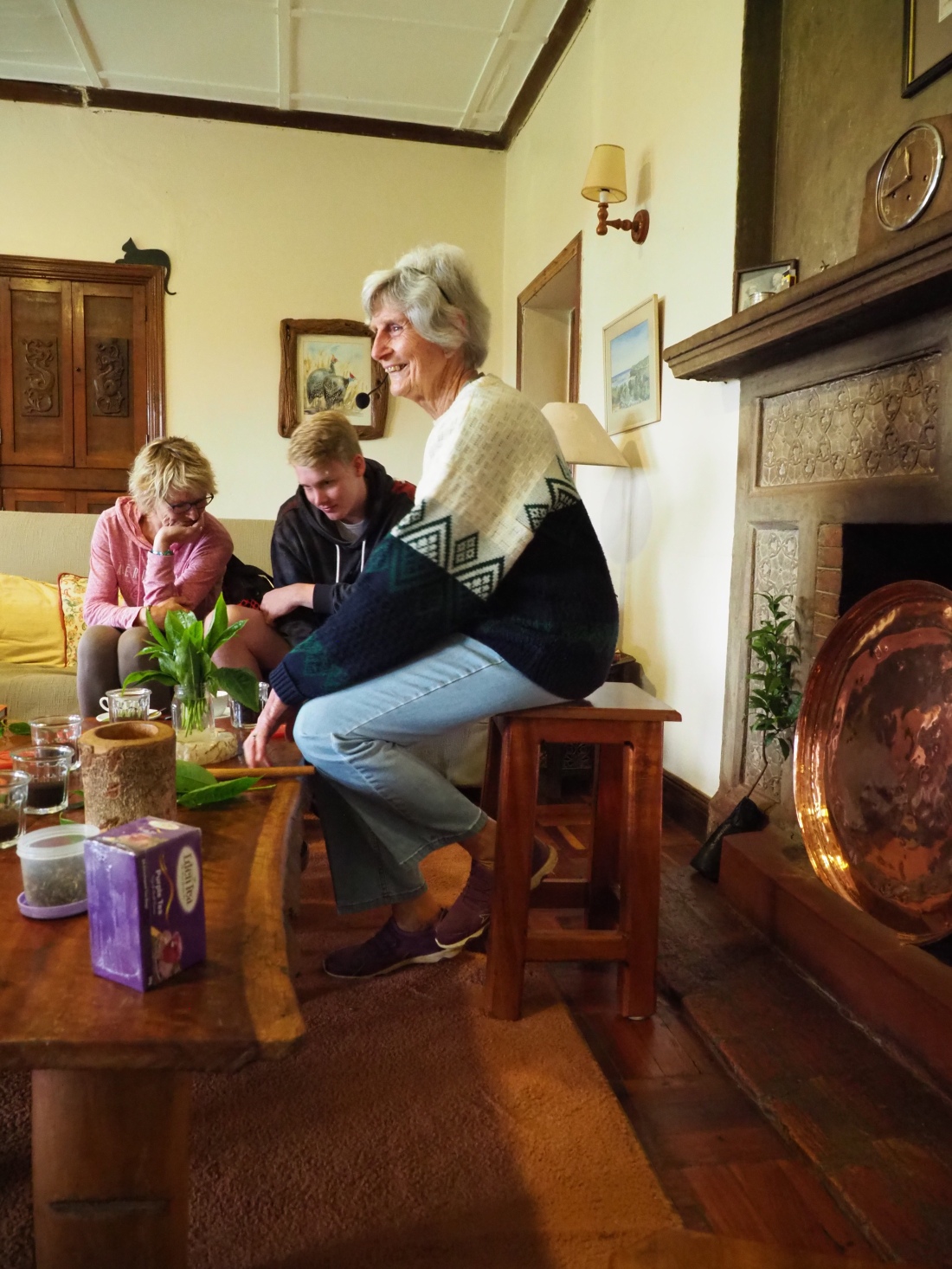 Tea was first introduced to Kenya in 1903 by G.W.L. Caine, who planted it in Limuru. Commercialization of tea production began in 1924, and Kenya is now a major producer and exporter, ranked second after China for tea exports.

As for the varieties of tea, green, yellow, oolong, white, and black, Fiona said that “it’s all the same tea.” Whether it’s marketed as green or black, Twinings or Lipton, it’s all from the same stuff. “The processing plant mixes all of the leaves from all of the farms together.”

There is only Camellia sinensis. The difference is not variety, but rather one leaf processed in different ways. Green tea is the least processed, and black tea is the most processed.

The “process” does not involve chemicals or anything else besides water, drying, and sorting. All tea leaves start as fresh and green, and therefore they contain moisture. Left alone, they would oxidize and spoil.

At its most basic, the process involves wilting, oxidizing, and stopping the oxidation. Green tea results from this most basic process, being wilted, steamed, rolled, and dried, allowing as little oxidation as possible. Rolling is for shaping – different types of tea are shaped and stored in different ways.

Kiambethu’s tea is processed to be black tea. When it is finished, the factory seals it into large, foil-lined bags, which are imprinted with the factory’s name, known as the “factory mark.” These are then trucked to Mombasa, where the broker representing the farm will catalog it with others, and sell it at the weekly Mombasa tea auction, held under the auspices of EATTA, the East African Tea Trade Association. This is where virtually all of Kenya’s teas are sold, auctioned to international buyers for companies like Tetley, Lipton, and others. The Mombasa Auction is an important reference point for the global tea trade.

While we were listening to Fiona, her crew had set up tables for lunch on the front lawn of the house. The lunch was not ready, so we were given a tour of the farm.

They are a working farm, with a few cows, chickens, and a very large vegetable and herb garden. Many of the ingredients for their lunches come from their farm. 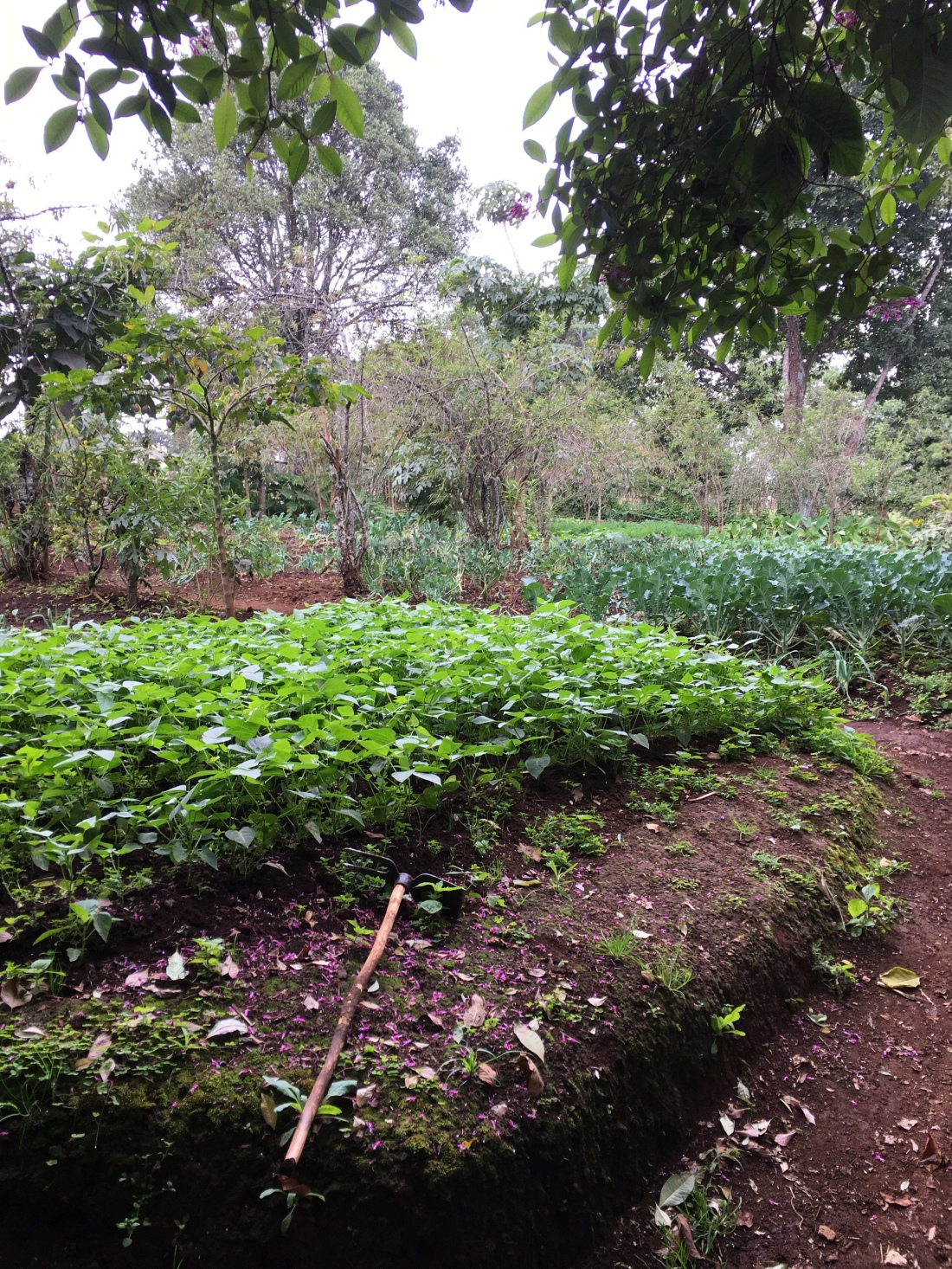 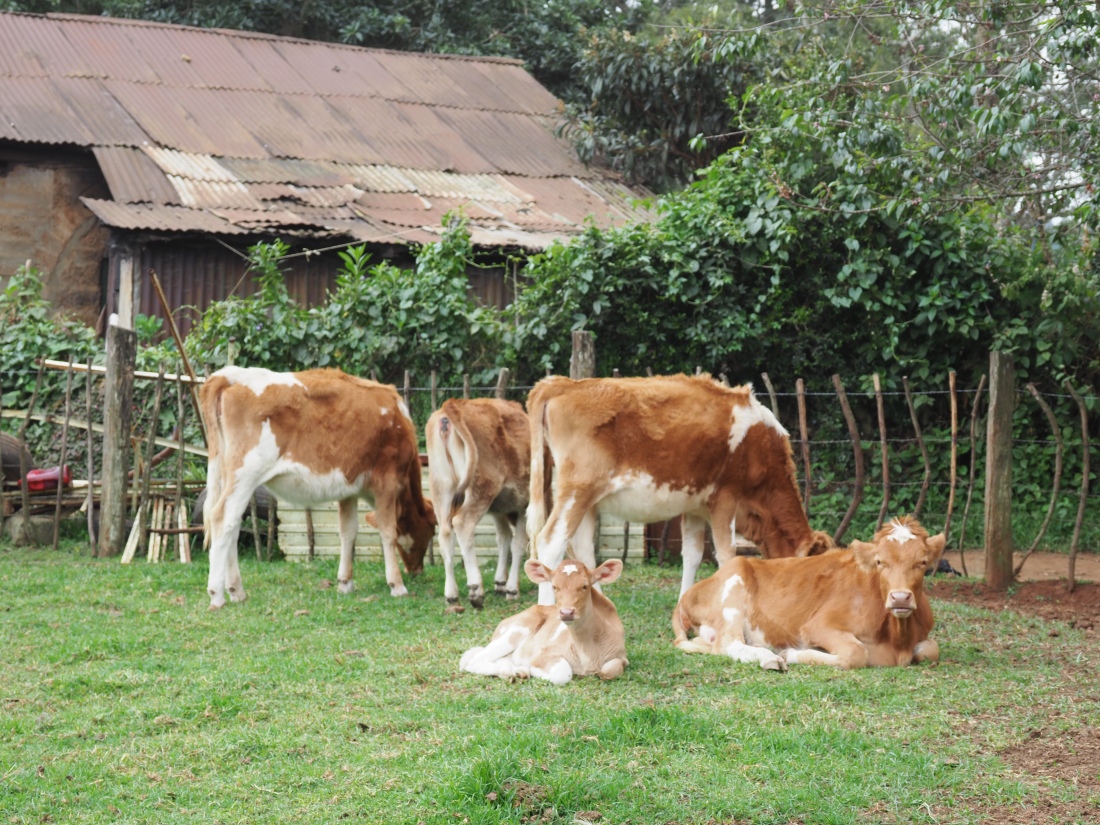 Our guide then took the group into a wooded area, where he pointed out specific plants that were used for medicinal purposes by the indigenous people in the area. But the biggest hit of the walk were the Colobus monkeys who live in the wooded area on the farm!

We returned to the house, where we were served a glass of wine on the veranda, and then enjoyed a lovely lunch on the lawn. Each party was assigned to a separate table. There were two of us that were “parties of one,” and we were both invited to join a mother and her two sons, so we became an international group – they from Germany, I from the U.S., and a gentleman from Australia. 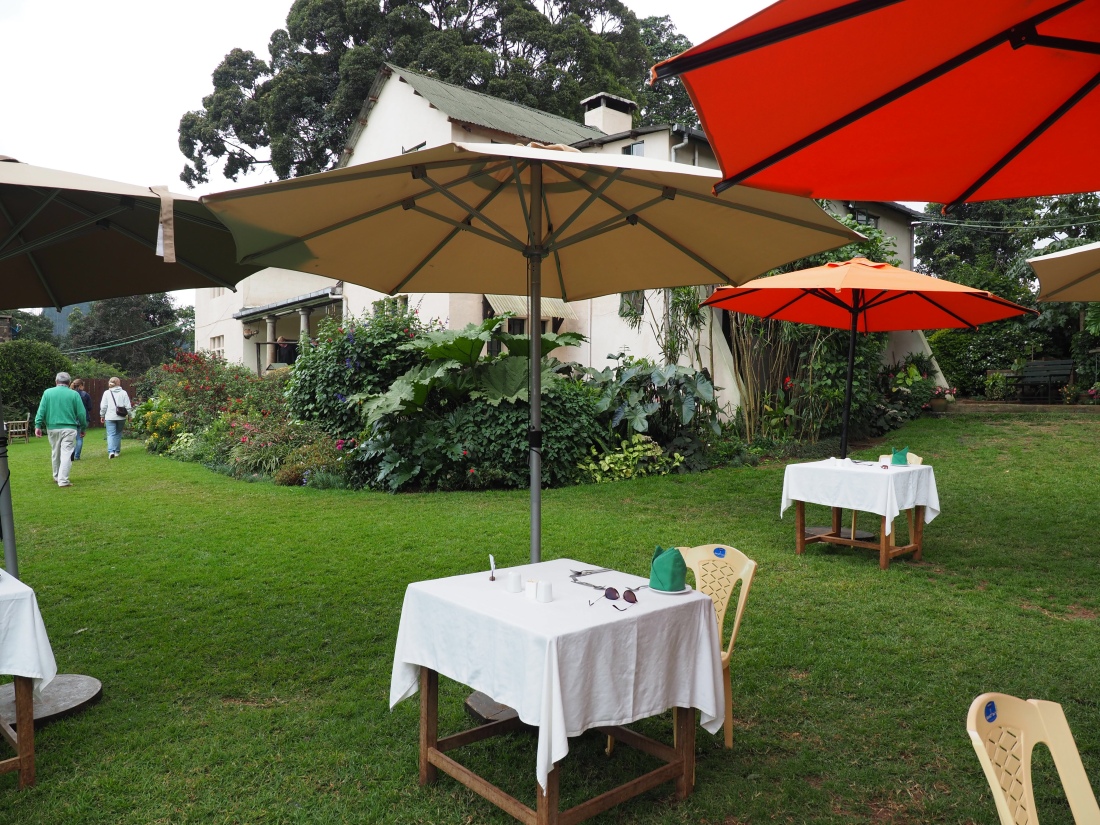 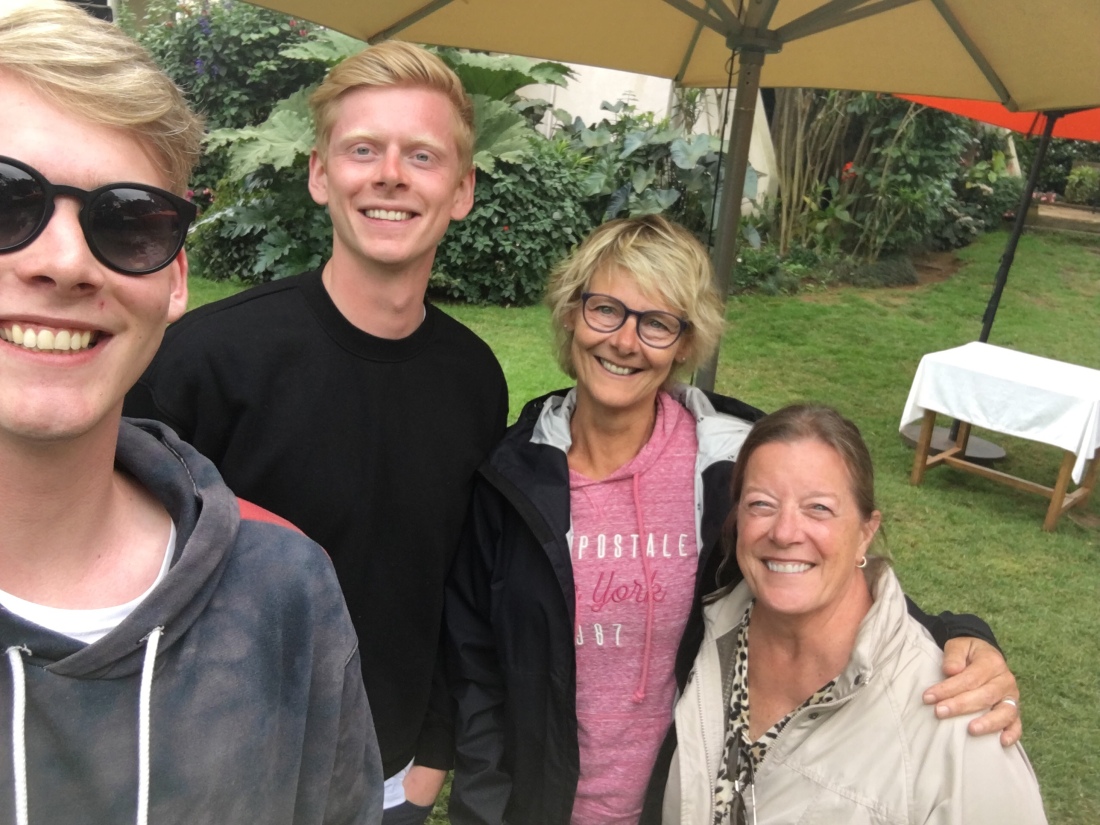 Lunch was delicious, the company was wonderful, and dessert and tea was a great finish to the day.