Elephants are popular with visitors to Kenya, but they are not universally loved, sadly. The Elephant Orphanage in Nairobi was established by David Sheldrick over forty years ago to help care for elephants who are orphaned before they are mature enough to fend for themselves. The mothers of these elephants die from various causes, but the majority of them are victims of poachers after their tusks (mainly) and other body parts. Others are injured by farmers who suffer financially from elephants browsing through their fields, destroying crops along the way. The David Sheldrick Wildlife Trust was created to manage the orphanage, and to provide an educational resource.

Visitors are allowed only in the mornings at eleven a.m., when feeding time starts. It is a “be there or be square” event, because the orphanage is closed after the feedings. There are two shifts. The elephants are divided by age to avoid overwhelming the younger elephants with competition from the adolescent elephants. The elephants are offered milk from bottles and branches from trees are in piles on the ground – these things are what they would eat in the wild, depending on their age. 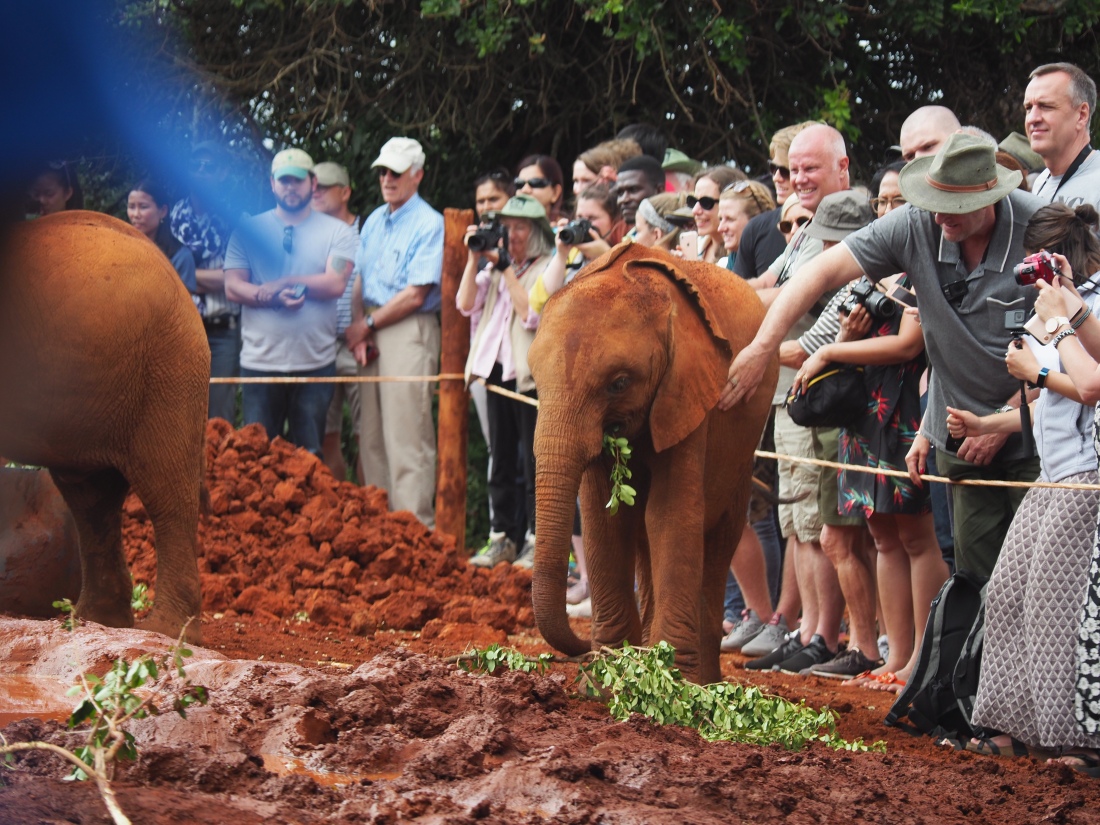 These are not “show animals.” They have not been trained to do tricks. As a practical matter, however, they are trained to some extent, because you will notice that the only barrier between the elephants and the people is a rope. And yet, the elephants did not try to reach out at the people or tear down the barrier.

The goal for these elephants is to return to the wild. Some, however, have been damaged too badly to release. In the two groups that I saw, there was only one, an immature elephant whose trunk had been caught in a snare. Though it had healed enough to no longer be painful, it could not heal in a way that retained full function, so she would be staying with the Orphanage.

The elephants seem happy enough, and they spent about half an hour per group eating, playing with each other, and getting all muddy. It may not have been “standing on their heads,” but it was all the more entertaining because it was genuine. The supervisor indicated that the young male elephants would be expected to leave their families as they reached maturity, so that introducing them into the wild is a little easier. The females generally stay with their families, so finding acceptance takes more time, but is not impossible.

The orphanage is a peaceful haven for the elephants, and a popular way to educate visitors, tourists and Kenyans alike, about elephants. 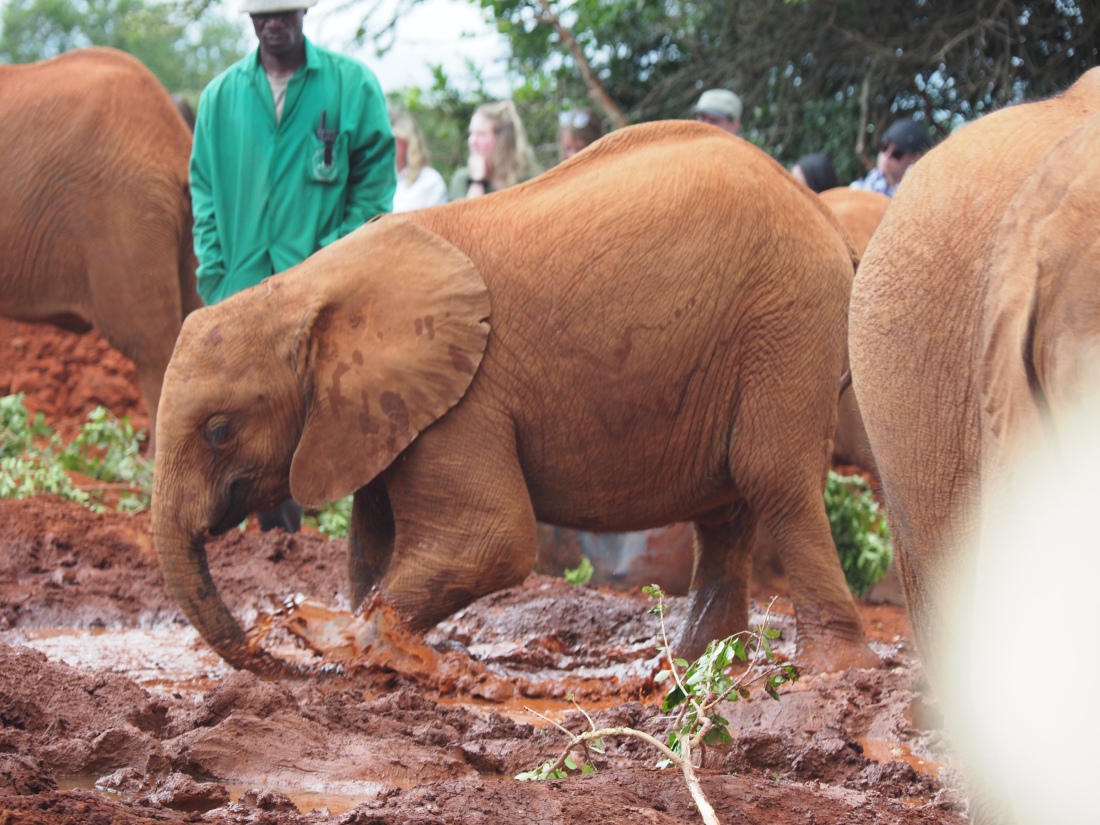 Giraffes are found in every country that I have visited so far. They are appealing creatures, being gentle, beautiful, and – given a chance – friendly! I have always thought they were a bit stand-offish. It seemed that every time they spotted human beings, giraffes would hide themselves or walk away. (See my blog post, “Maasai Mara”) But here, giraffes are anxious to see you! Well, the food helps.

The Giraffe Centre in the Karen neighborhood of Nairobi is working to change that stand-offish image. Using a time-honored method of winning over animals, i.e. food, they are trying to bridge the cultural gap between giraffes and humans. Like all environmentally challenged animals, giraffes benefit from better publicity and supervised interactions with people. 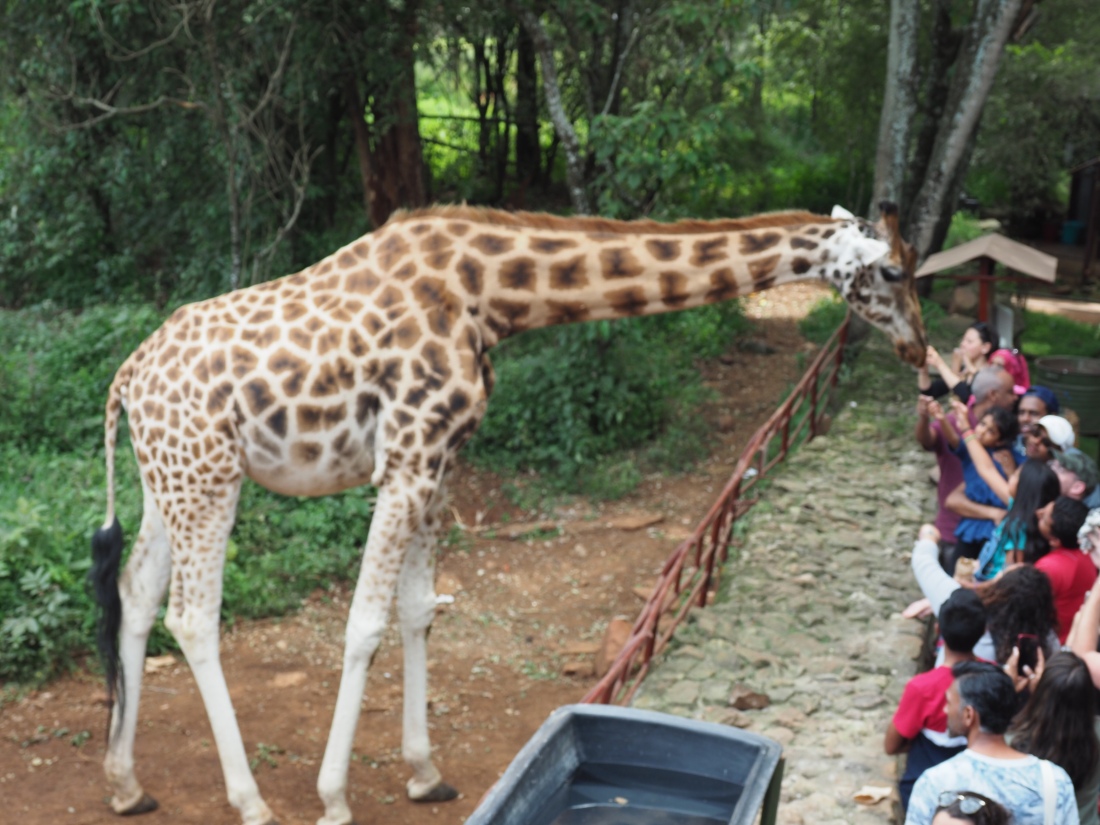 While humans have been admonished for years “Don’t feed the animals,” it is not only okay here, it is encouraged – as long as you are using food purchased from the Center. I’m sure the proceeds help their bottom line, but more importantly, it means that the food the giraffes are getting is nutritious and not harmful to them.

They also make the food in a handy shape that makes it easy for people feed the giraffes without any nipped fingers. The giraffes who are allowed to interact with the humans are gentle, but they are giraffes, and they are stronger than humans. In the wild, the males use their necks to fight each other over the females, all giraffes can run fast, and, let’s face it, if they weren’t strong, they wouldn’t survive. 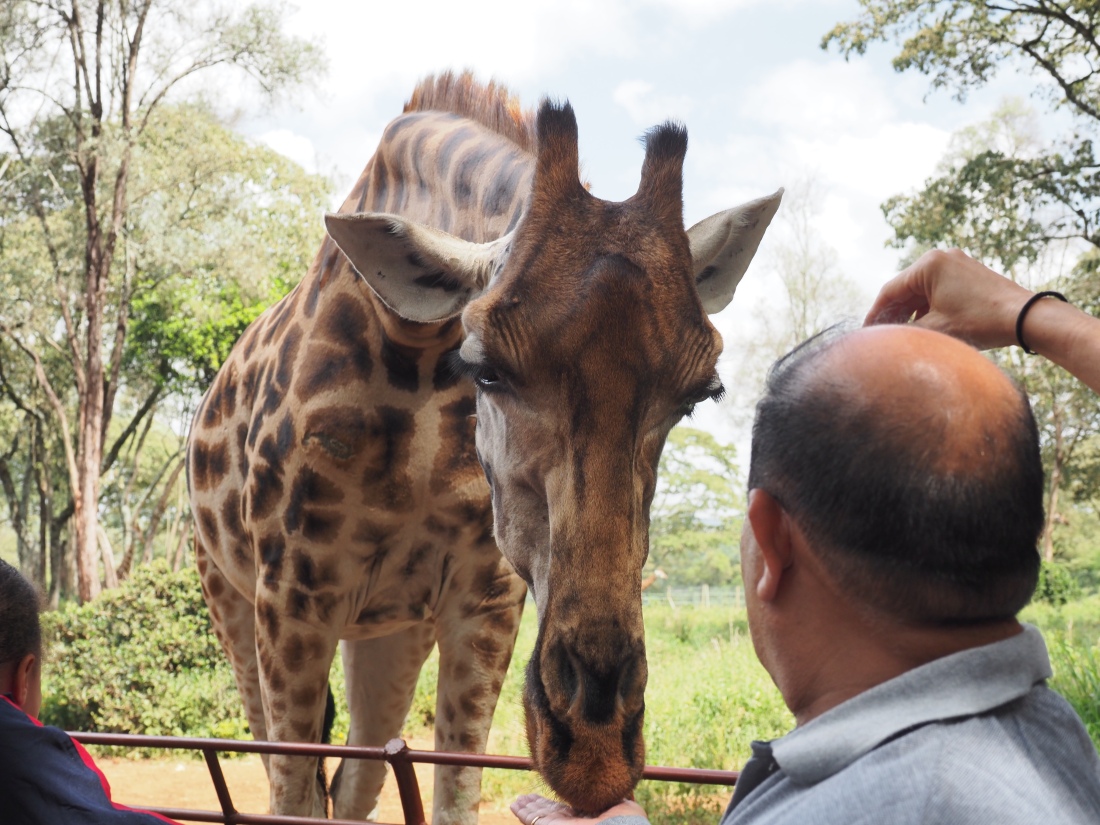 The Giraffe Center has built a two-story, round tower with a surrounding veranda that allows humans to come face to face with the giraffes. The giraffes know that these humans come bearing food, so they are eager to get to know you. There is a barrier to prevent children from falling off, and a railing strong enough to prevent a giraffe from reaching all the way into the veranda. The veranda allows a visitor to stand back from the railing and simply observe if they wish. It is a comfortable environment. 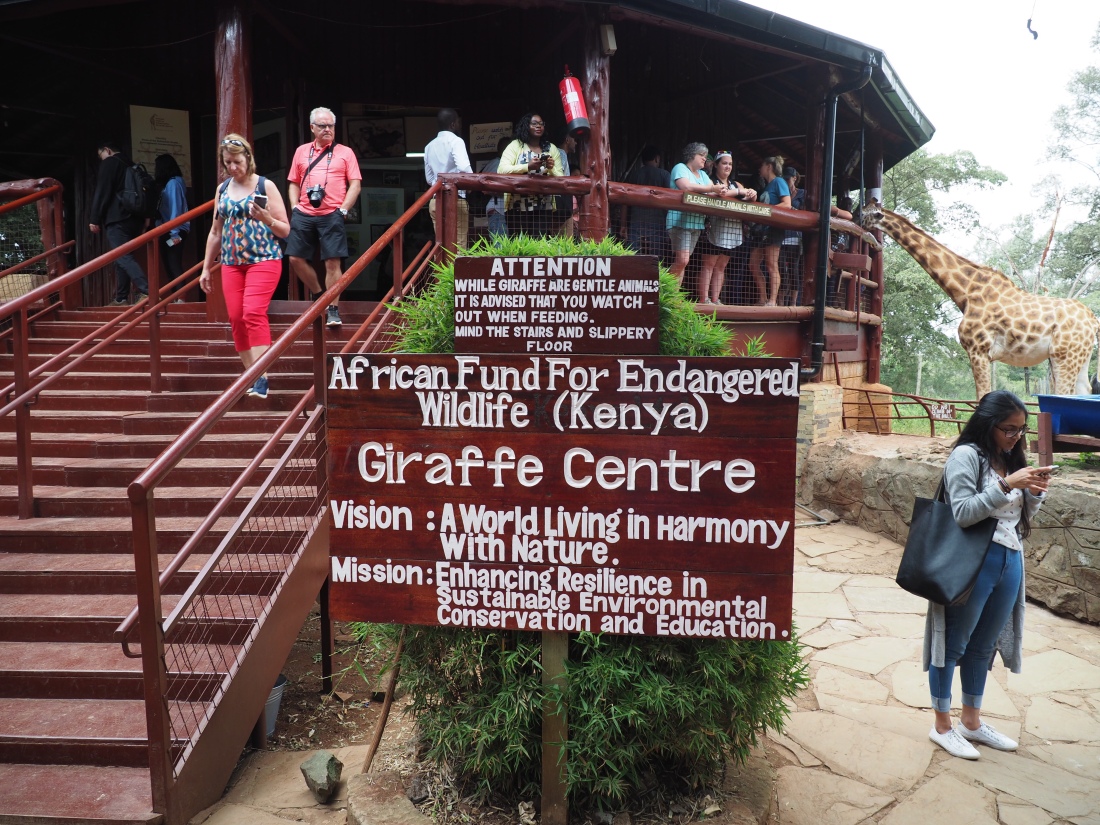 Not many humans hang back, however. Feeding the giraffes is a very popular activity, and some people raise it to “trick pony” status by holding the food nugget in their teeth (it’s basically compressed hay, after all,) and waiting to get a “kiss” from the giraffe, who uses its tongue to retrieve the nugget from the human’s jaw.

I was not keen on getting a kiss from the giraffe. Their kisses are sloppy, and I had doubts about building a durable relationship. But they were happy to accept the nuggets from my hand, and it was fun to see them so close up. The kids were variable – some stayed back, some were okay with being held by their parents, and some could hardly wait to feed these long-necked creatures.

As part of their mission, the Giraffe Center conducted educational sessions about every two hours during the day. The sessions were about forty-five minutes to an hour, depending on questions and discussions.

I sat in on a session, and learned about the different species and subspecies of giraffes, and about their habitat ranges in Kenya. I learned from one sign that “Rothschild” giraffes have been renamed as “Nubian” giraffes, indicating their home rather than the European who named them.

Giraffes are the tallest land mammal, averaging four to five meters tall (twelve to sixteen feet,) and weigh up to 1,900kg. Their necks average six feet long and have seven vertebrae, just like human beings! They gestate for fifteen months, have one calf per birth, and they live for about 25 years in the wild. Sadly, about half of all calves do not make it to one year old, mainly because of predators. The speaker also tossed in that giraffes help pollinate plants and trees as they browse, including the spiky acacia tree, which does not seem to bother them.

DNA tests done in 2016 have determined that there are four separate species of giraffe, three of which are represented in Kenya: Reticulated, Nubian, and Masai. The DNA also indicated that there was very little crossover among species, meaning that they probably evolved separately. Giraffes originated in Eurasia and the genus evolved about 7-8 million years ago. The genus includes only one other species, the Okapi, that does not have the same long neck and lives in forested areas.

Giraffes have a single heart, about 11kg in weight, that pumps 60 liters of blood through their entire body at a blood pressure that is about twice the pressure of the average human being.

They had jawbones from a giraffe, and leg bones, which are heavier than you might think. The speaker passed them around for people to see and feel their weight. When it was my turn, the leg bone was heavy enough that I had to be conscious in handling it so I didn’t drop it (“Oh my gosh, she broke it!”) or wrench my shoulder, but I didn’t need assistance to manage that, I just needed to be careful.

Giraffes, like other wild animals in Africa, have had a tough time, due primarily to poaching and loss of habitat. Their numbers have dropped significantly, especially the Nubian giraffes, which were nearly extinct in the 1950s. Masai giraffe population dropped by half, and Reticulated by seventy percent. But things are improving for them – legal protections, improved security at parks, a more educated public, and better conservation management.

Still, the expanding human population has changed the landscape. The giraffes’ range has been fractured by the growth of agriculture and by transportation infrastructure, making their access to forage more difficult. And, because giraffes have a “fusion-fission” pattern of social interaction, meaning that groups aggregate or dissipate depending on the environment’s ability to support them, the fractured range impedes the flow of genes among the population.

The Giraffe Center identifies the range of the different species of giraffe like this: 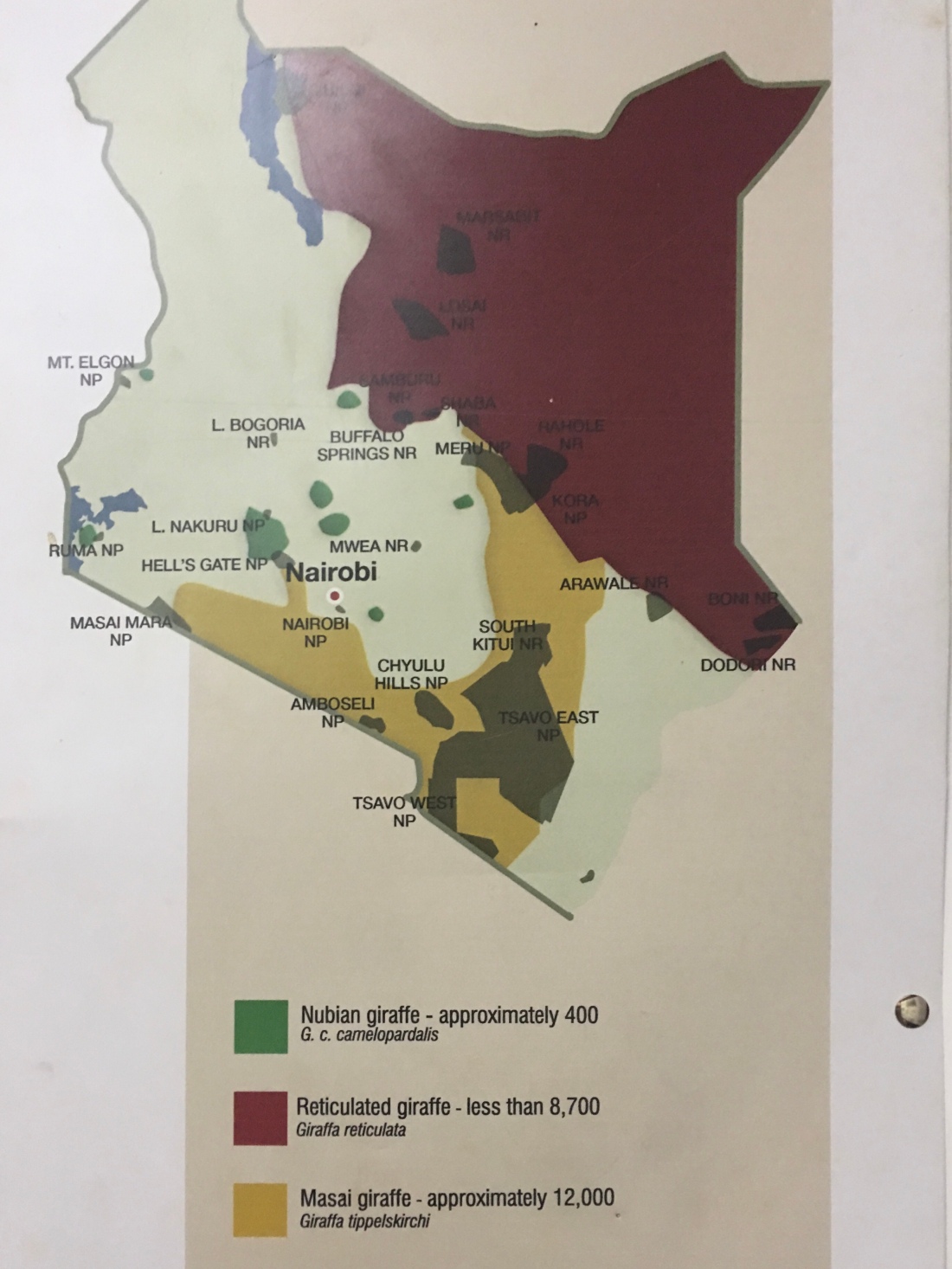 Giraffes are charming animals. With any luck, their numbers, especially the Rothschild/Nubian/southern or northern giraffes, will increase, and we will not lose any of these gentle and unique species.