“Flip flops and Beads” might sound like a dress code from the psychedelic Sixties, but today in Kenya, those words reflect lessons in sustainability and enterprise. These businesses are part of that movement. They are both located in the area on the edge of Nairobi known as “Karen,” after Karen Blixen, the author of “Out of Africa,” made into an Oscar-winning movie that was filmed nearby. (“Isak Dinesen” was on of the pen names she used.) Karen encompasses the area of the coffee-growing estate where Karen Blixen lived, and which she finally had to sell and return to the Netherlands.

Have you ever wondered what happened to that old pair of flip flops you threw in the trash? In the U.S., it’s likely that they ended up in a landfill near you or in the ocean.

In Kenya, you could feel good about your discarded flip flops. They are given a new life, being transformed and shipped around the world, bringing a smile to faces of children. (Children helped inspire the creations of Ocean Sole!) The factory has designed a portfolio of animals – sea turtles, hippopotamus, lions, elephants, and giraffes, among others – and they use old flip flops to give them a colorful life!

Today, I visited Ocean Sole Africa, located on the outskirts of Nairobi in Karen’s Village, a collection of artists’ studios and shops. 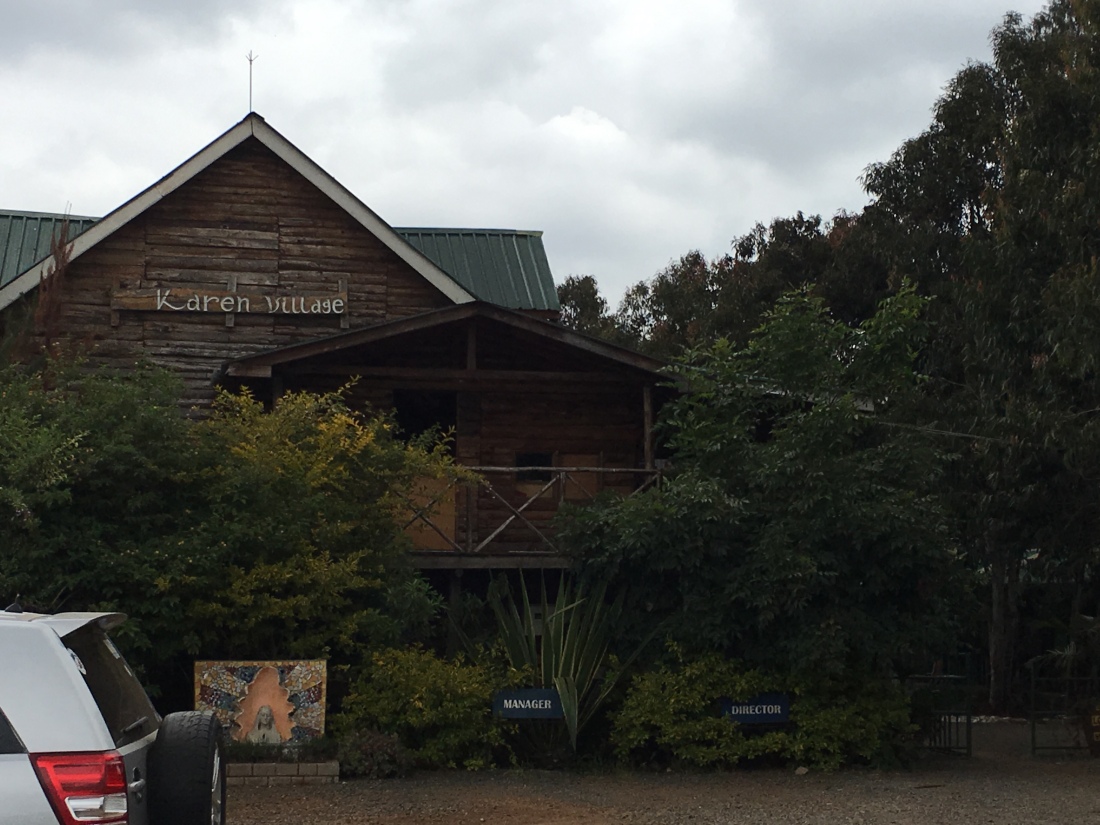 In the back of the village, at the end of a path that leads through the village’s artists’ studios, sits Ocean Sole Africa, where I found the production manager, Carolyn, in the office. Carolyn is new to the factory as this is her fourth month. As she showed me around, it was obvious that she is proud of the people and the factory and enthusiastic about its mission.

When dry, the flip flops are cut using dies that look like heavy-duty cookie cutters, producing a layer of colored rubber-like material in the profile shape of an animal. Some animals have more than one profile. A giraffe, for instance, has a head/neck profile and a body profile that includes legs. The sea turtle has a shell/body profile, a head profile, and flippers. Several layers are glued together, resulting in a rainbow-colored, body-width profile of an animal – a lion, perhaps. The animals with more than one profile piece are fitted together prior to shaping. 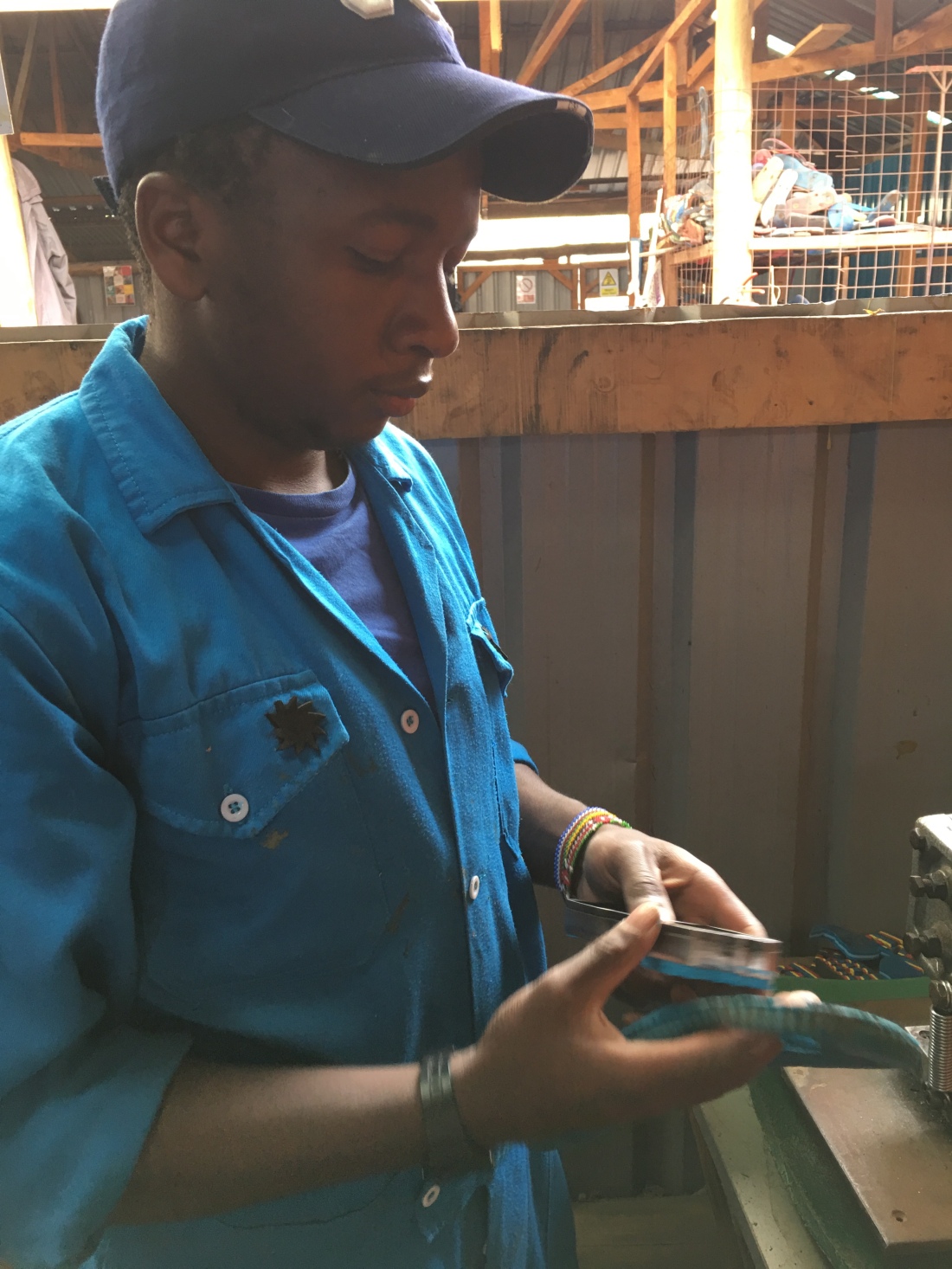 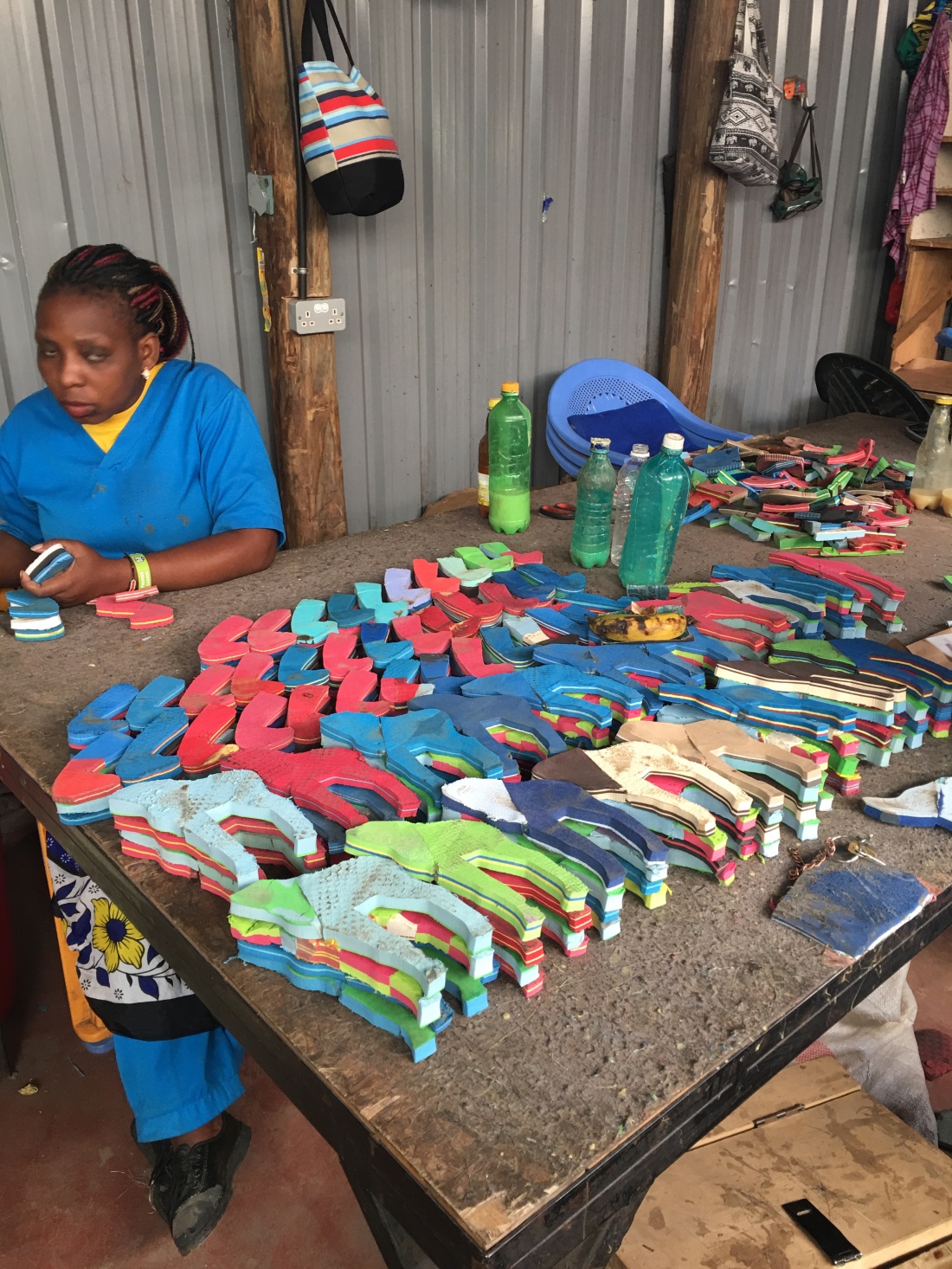 The toy is not yet the right shape – a lion does not have ninety-degree edges, for instance, so the next step is to soften the edges. This is done by trimming the body with a sharp knife, cutting away some of the extra material to form shoulders, a mane, and hindquarters that are more realistic. The rough-cut shapes are then ground down, maintaining the proper curves and bends, to produce a pleasantly smooth surface. As I watched, the young man running the grinder used it to produce shallow cuts across a sea turtle’s shell, imitating the pattern one would find in real life, if not the color. 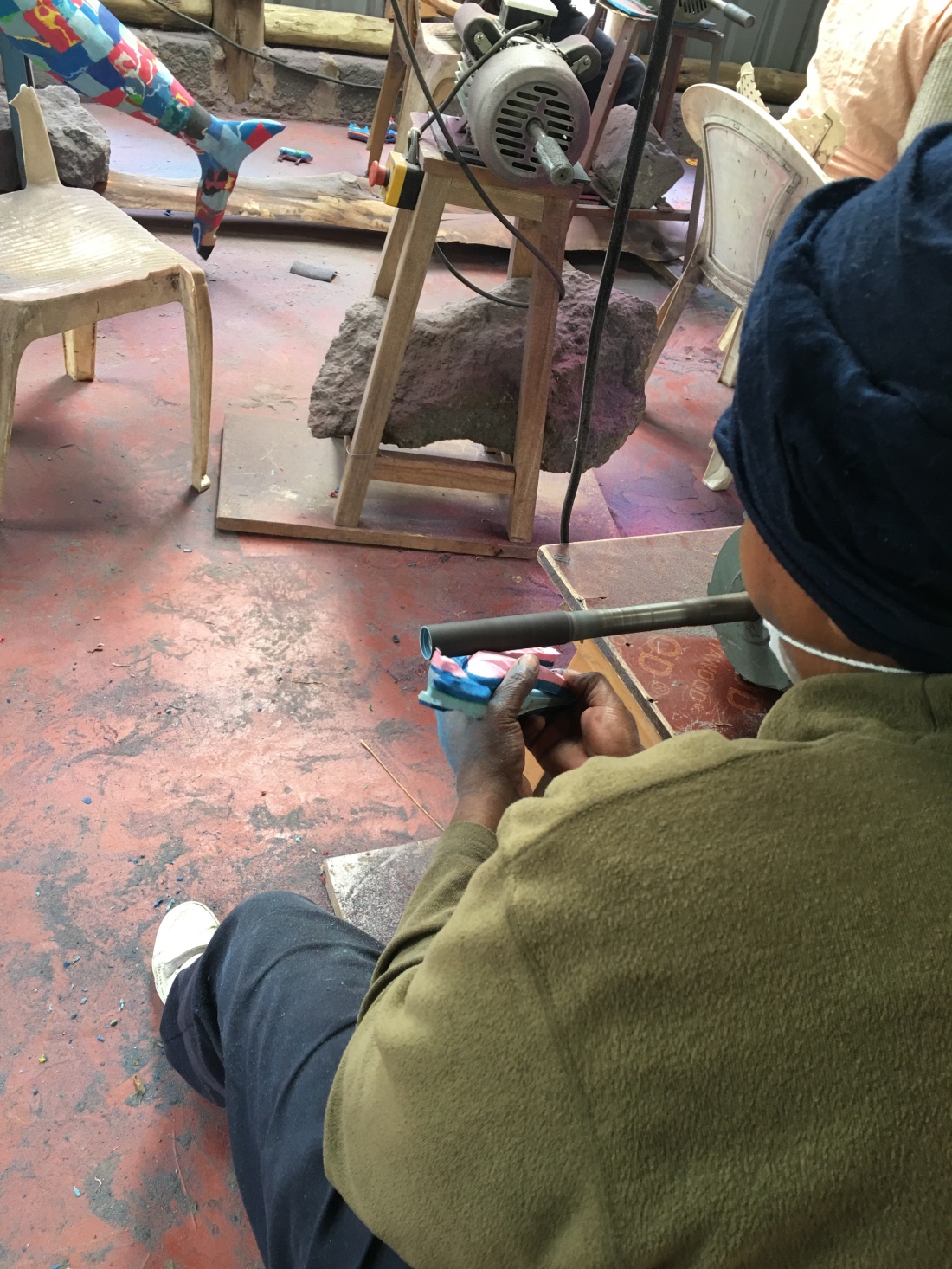 From grinding, the toys are moved to QC (quality control) for inspection. The toys come in various sizes, from small, medium, and large, to a toy as tall as a toddler. (You can special-order much larger sizes.) The very large toys have styrofoam centers so that they do not become too heavy, which would be awkward for a child and much more costly to ship.

When the toys are approved by QC, they get eyes and, for some, eyelashes, ears, and tails, as required, and are ready for the touch of little fingers! The toys finish where the used flip flops began. These are all hand-made by real people who care about the artistry and the kids.

“Most people think of flip-flops as casual beachwear. Cute, sexy, colorful, decorated and fashionable. In fact, flip-flops for over 3 BILLION people are the only pair of “shoes” they own. These flip-flops get worn for about a year and then after many repairs, are discarded, All of these flip-flops will ultimately end up in our Earth’s waterways, landfills and oceans.” —Ocean Sole Africa

Part of the mission of Ocean Sole Africa is to recycle the whole flip flop, so what happens to the material that is left over after stamping the profile? Or the stuff cut away from the toy during the shaping? Rubber beads are cut from the leftover pieces of sole or from larger chunks of material cut away during shaping. Un-useable chunks are cut up into smaller chunks and used for playground material, mattress material, or, when a school tour comes through, used for mosaics and masks that the kids make during their visit.

In the showroom, it is obvious that creative minds have been working overtime – there are many other products being made from the flip flops – key chains, door stops, balls, and other items, including more animals and sea creatures.

Ocean Sole Africa was originally started by Julie Church in 2002. The current owner, “Chief Sole Mate” Erin Smith, has carried on since 2006 expanding the business, which is clearly a growing enterprise. This is important because Kenya has a very high unemployment rate, about forty percent.

The factory in Karen Village had between thirty to forty employees plus the production manager and the sales representative working when I visited. Overall, the company employs ninety people. In addition, the factory buys bags of flip flops collected by independent individuals, fishermen among them, which helps to support more members of the community. Ocean Sole also contributes to educate children.

Ocean Sole Africa has one hundred fifty vendors worldwide, forty of them in the U.S., and is getting ready to open a fulfillment center in Jacksonville, Florida, in September. I met their International Sales Manager, Joe Mwakiremba, and it turned out he attended school in Dunedin, Florida – I continue to be amazed at the small world we live in.

If you come to Nairobi, Kenya (which I recommend,) the factory welcomes visitors and will give you a free tour. You will also find a selection of their products for sale and trust me, they are hard to resist. I came away with a small hippo.

You can see and buy these creations on line at http://www.oceansoleafrica.com, find them on Facebook and Instagram as Oceansole, or on Twitter as Oceansole1. They currently have vendors in the U.S., the United Kingdom, Australia, and Kenya. You can find a list of vendors on their website. You can also inquire about becoming a vendor.

“Kazuri” means “small and beautiful” in Swahili. It all began with two single mothers in 1975. Today, Kazuri, located in Karen, outside of Nairobi, employs over three hundred forty women (and a few men!) in their hand-crafted ceramic bead and pottery business. 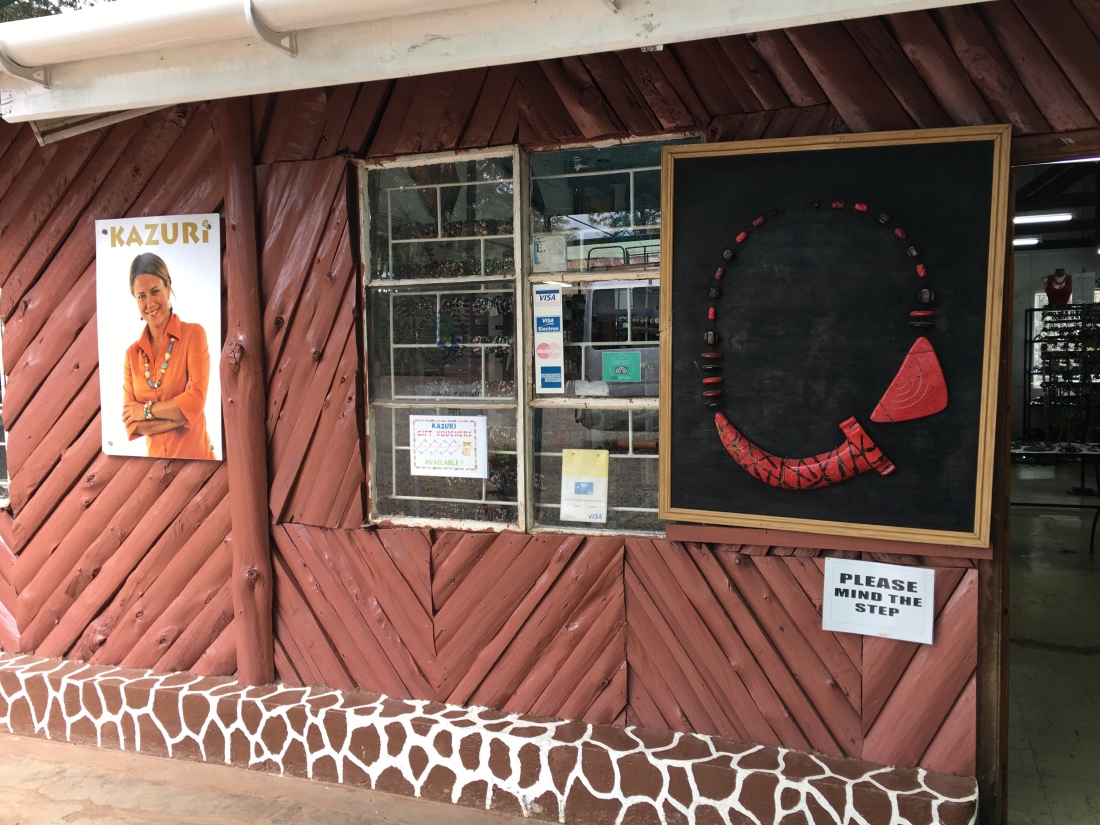 It is a booming enterprise with distributors worldwide, including the U.S. through their American distributor. Over sixty percent of their product is exported, and they are members of WFTO, World Fair Trade Organization. Other distributors are located in the United Kingdom, the Netherlands, Scandinavia, Germany (covers Austria,) Australia, Uganda, France, Tanzania, and Japan, not to mention the dozen or more stores in Kenya that carry their products.

Kazuri welcomes visitors to their free tours of the workshops Monday through Saturday. You can check their website for up to date times, but generally they start at 8 a.m. through about 4 p.m., and half-days on Saturdays.

The atmosphere in the factory workshops is wonderful – the women sit around tables, doing their work, talking and joking. The company supports its employees by providing medical care for the employee and their immediate family, and by providing on-site day care for children.

The process begins with making the clay, “from the earth of Africa,” as their website says. The clay dries while waiting, so it has to be reconstituted by adding water: 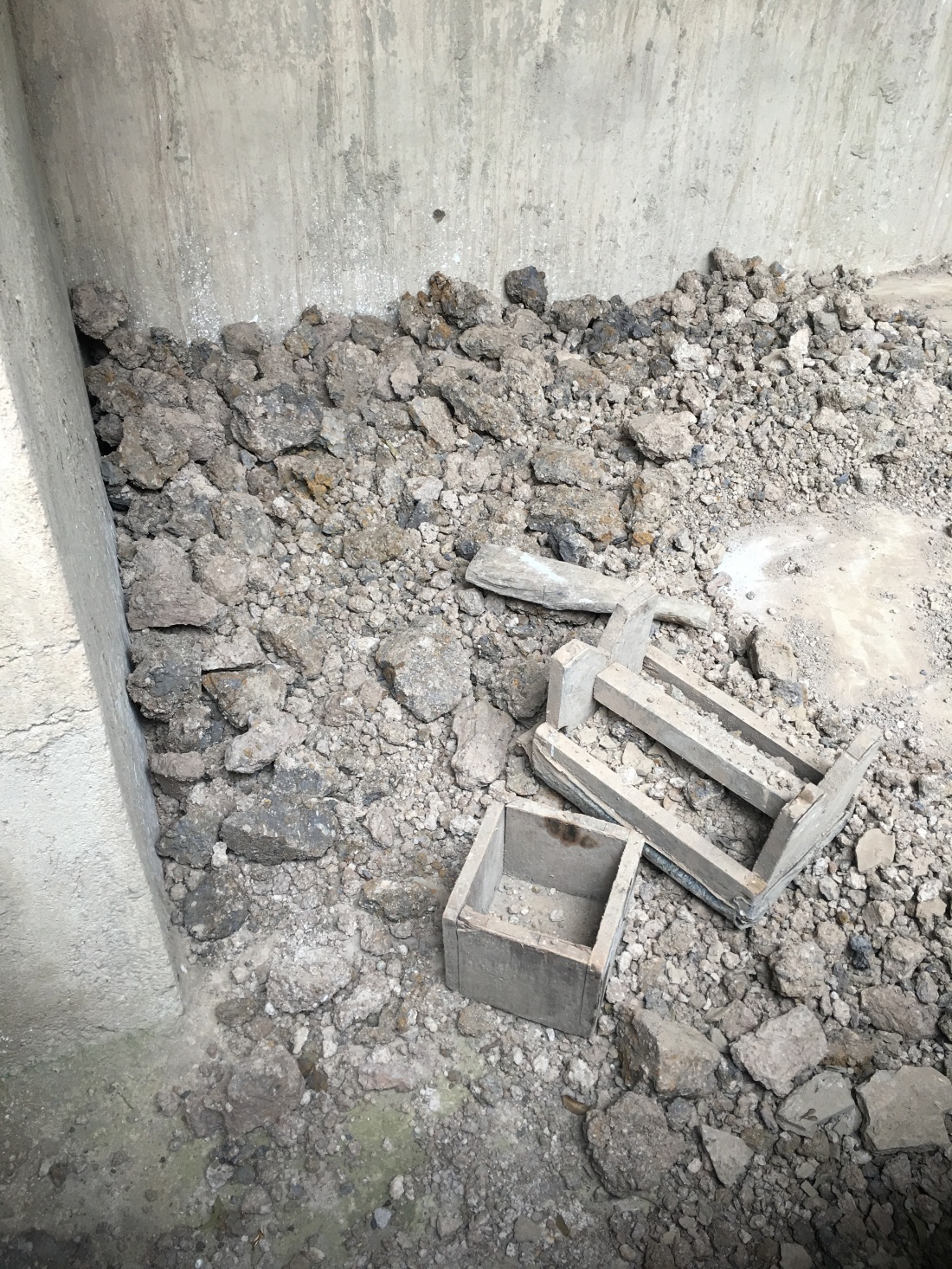 The water is mostly squeezed out after this, but to create the right working pliability, more water has to come out. In the larger press, this takes about three days, in the smaller, it is about five days: 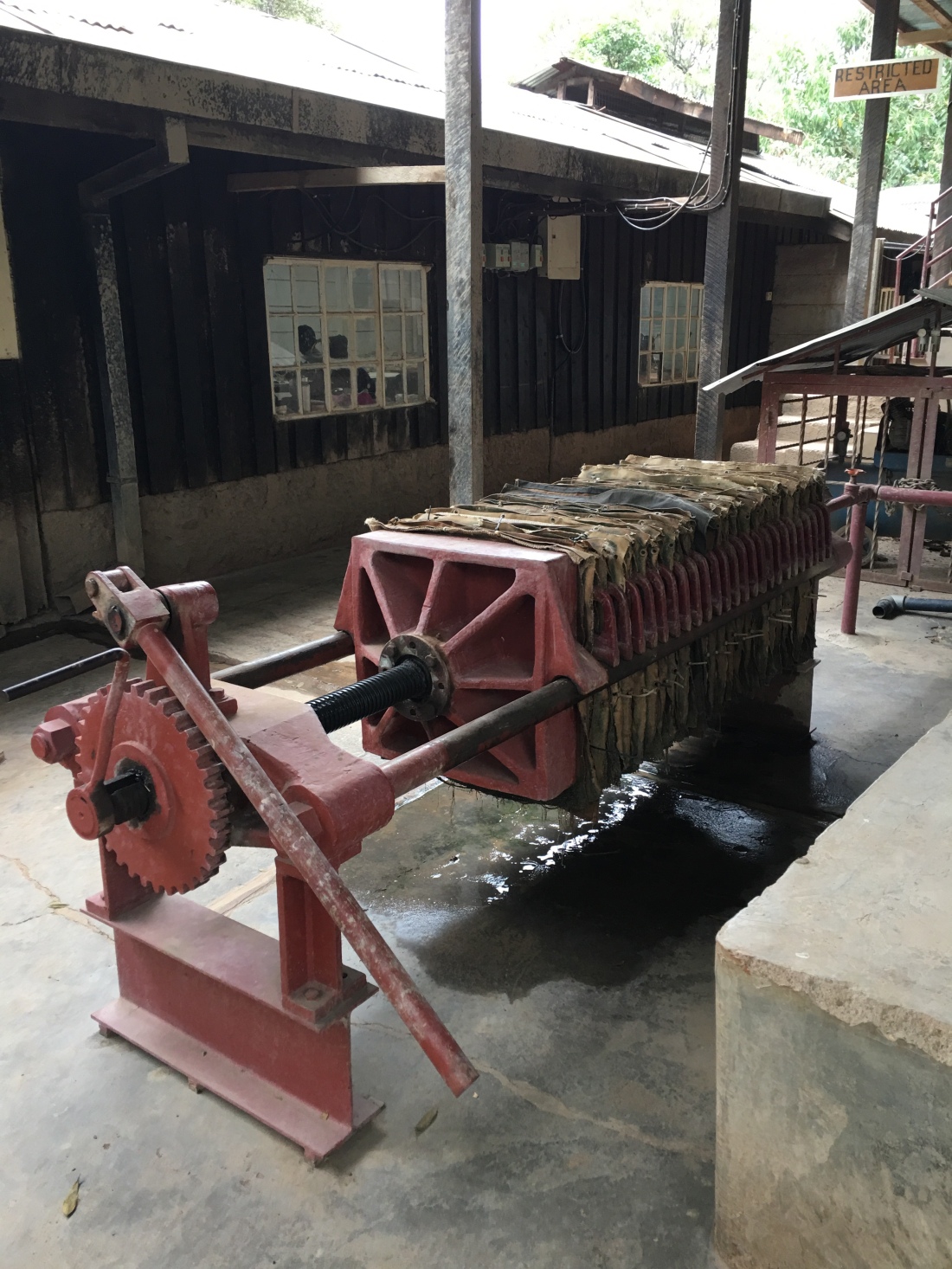 The equipment they use reflects the growth of the company. The smaller press was from their earlier days, and the larger one is newer. Later, we will see their original kiln.

To keep uniformity, the beads are formed with molds, and each style has its own mold:

The molds are stored on this table in the corner. I am willing to bet that it’s actually organized in the sense that they all know where the one they want is, and where it should go when they’re finished with it….

The molds are used to form the beads, but they need trimming and holes before the beads move forward.

As I was rounding the end of the table with my tour guide, I made a “style stop.” One of the ladies working there had a unique hair style. 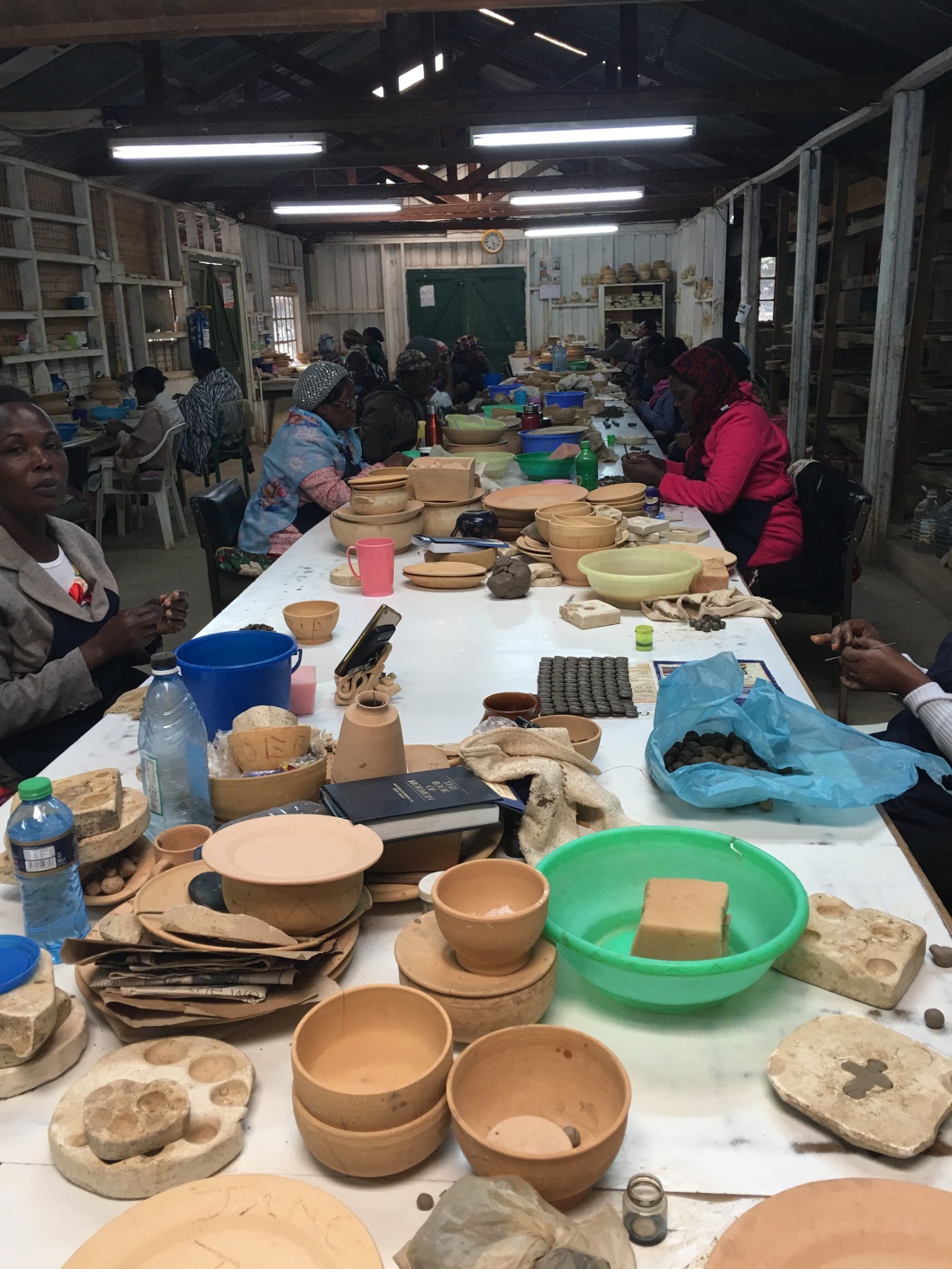 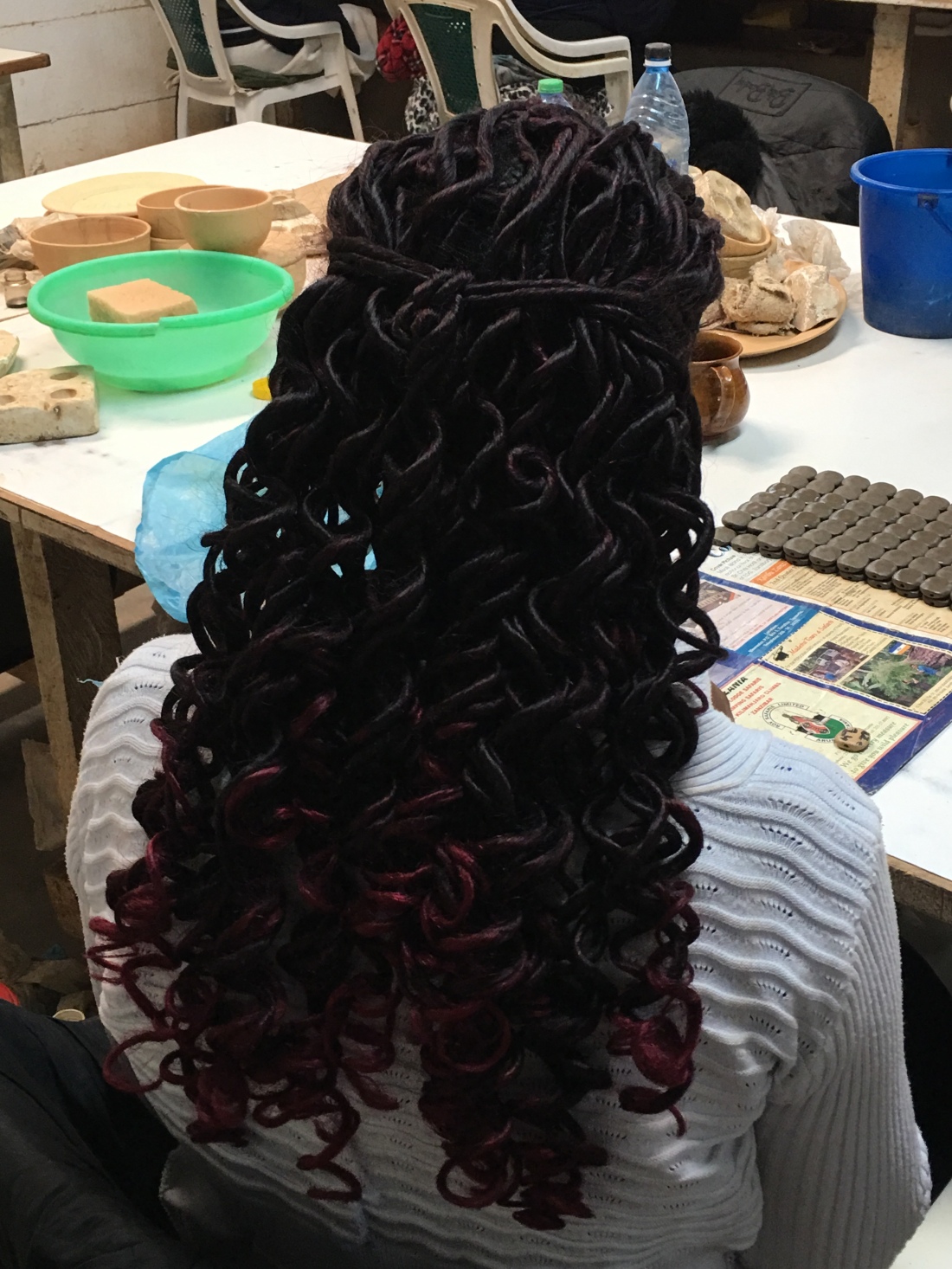 She was amused by my interest, and patiently allowed me to take the photo. Her co-worker was equally amused.

The factory started with beads, but now includes other clay creations, such as this small army of elephants.

Vases, cups, plates, and custom items have also been added: 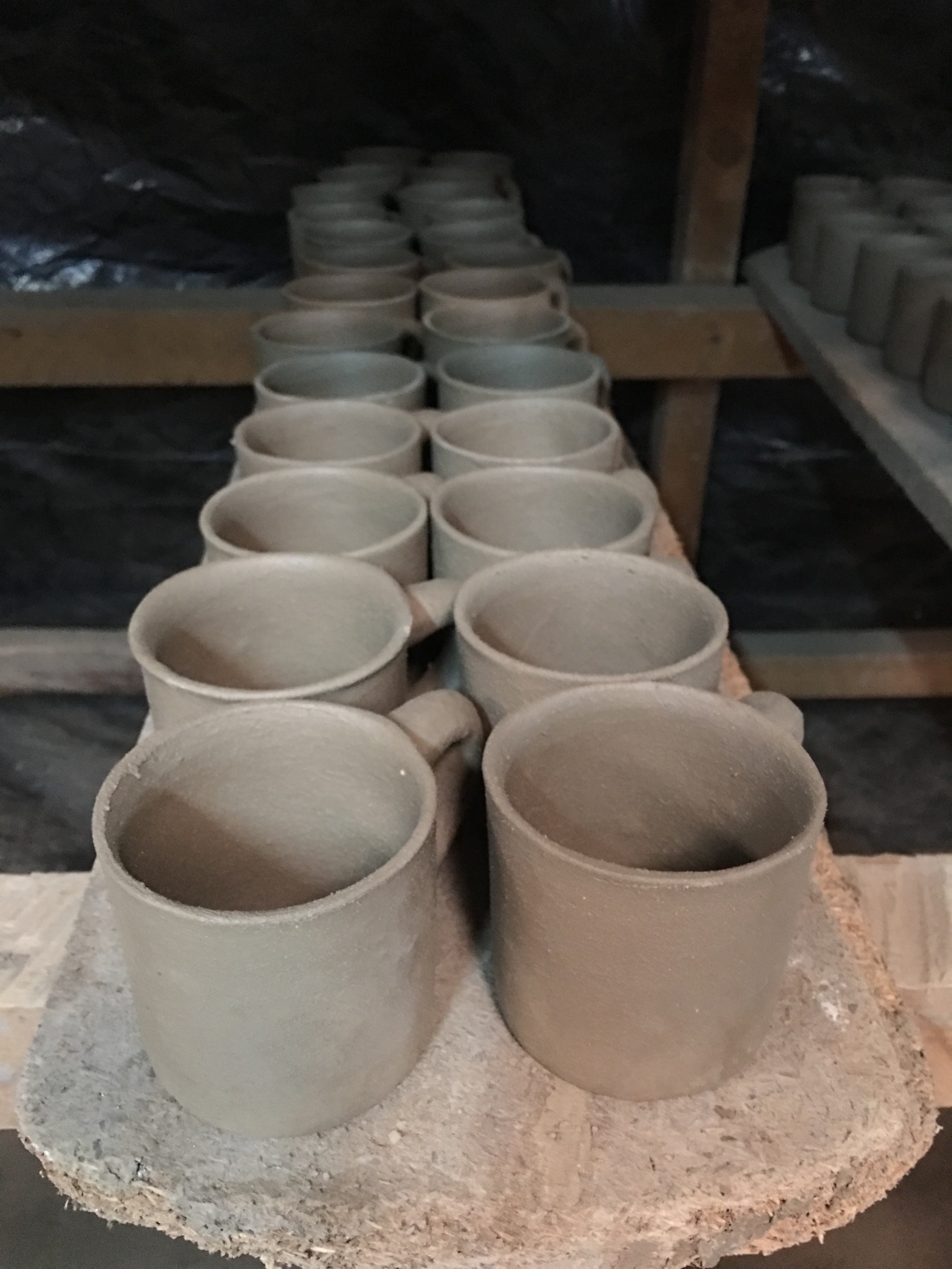 The clay beads dry, and then are painted according to the directions: 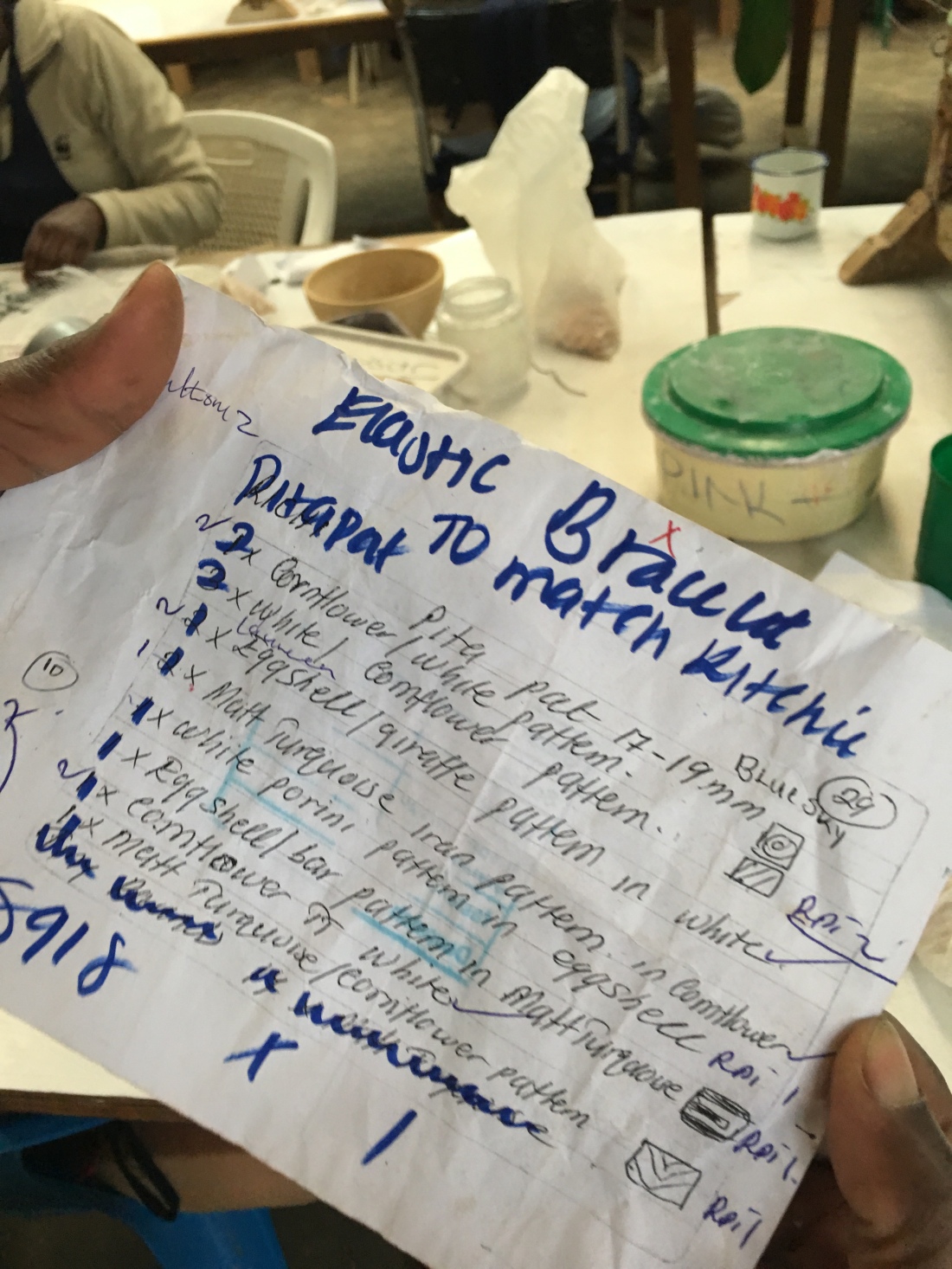 You can see the beads, strung on a wire, stacked in the wooden frame as they are worked on. When painted, they are put into the kiln to bake overnight. When my guide told me that it took three hours to load the kiln, I was surprised. Who would think? But, then she showed me how it’s loaded, and it made much more sense.

The loading begins at the bottom. The wires that painted beads are strung on fit into grooves cut into small bricks. When the first layer is filled (making sure nothing touches each other,) another layer of spacing bricks is placed on top of the lower bricks. The spacing bricks are not large, so each kiln holds hundreds of beads. 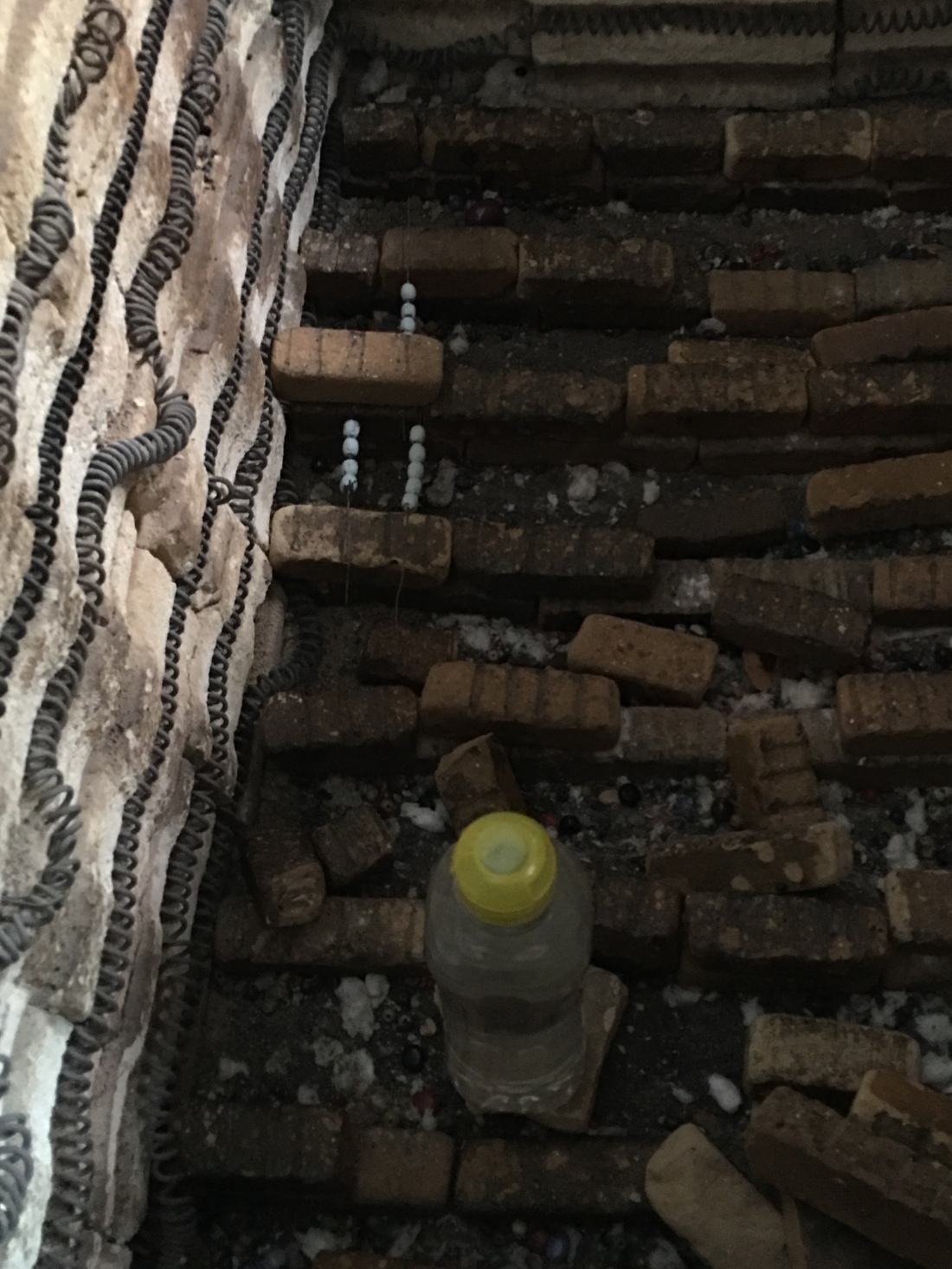 When baked, the beads also cool for a while before the kiln is opened, then go to the QC area for inspection. In spite of the care taken, occasionally beads crack or break off. Many can be successfully repaired, but some have to be fully rejected. Fixing them is economical, if you consider how much time has already been invested.

The beads are sorted into large glass jars, and stored… 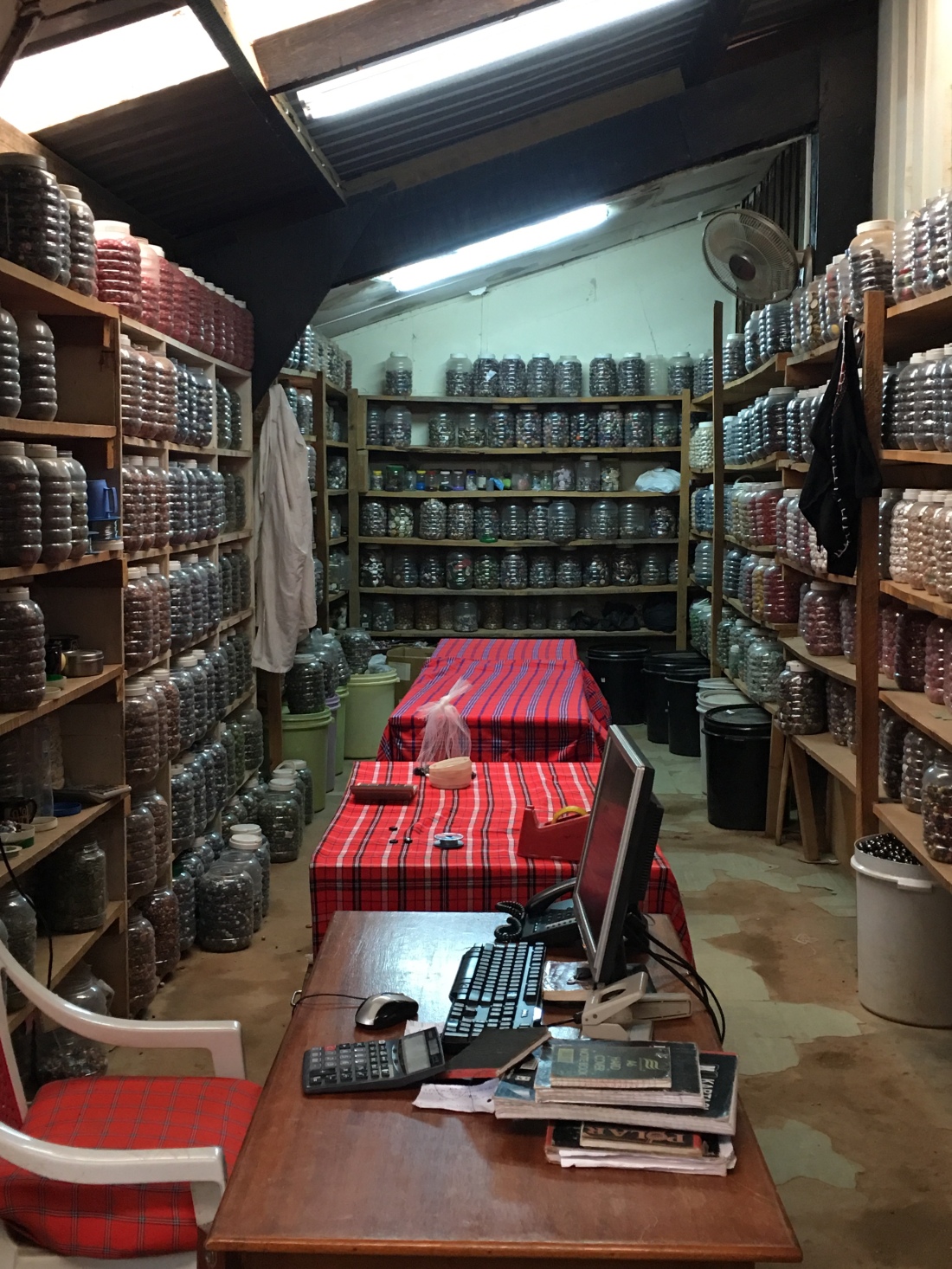 Until it is time for them to become part of a bracelet, necklace, or earrings: 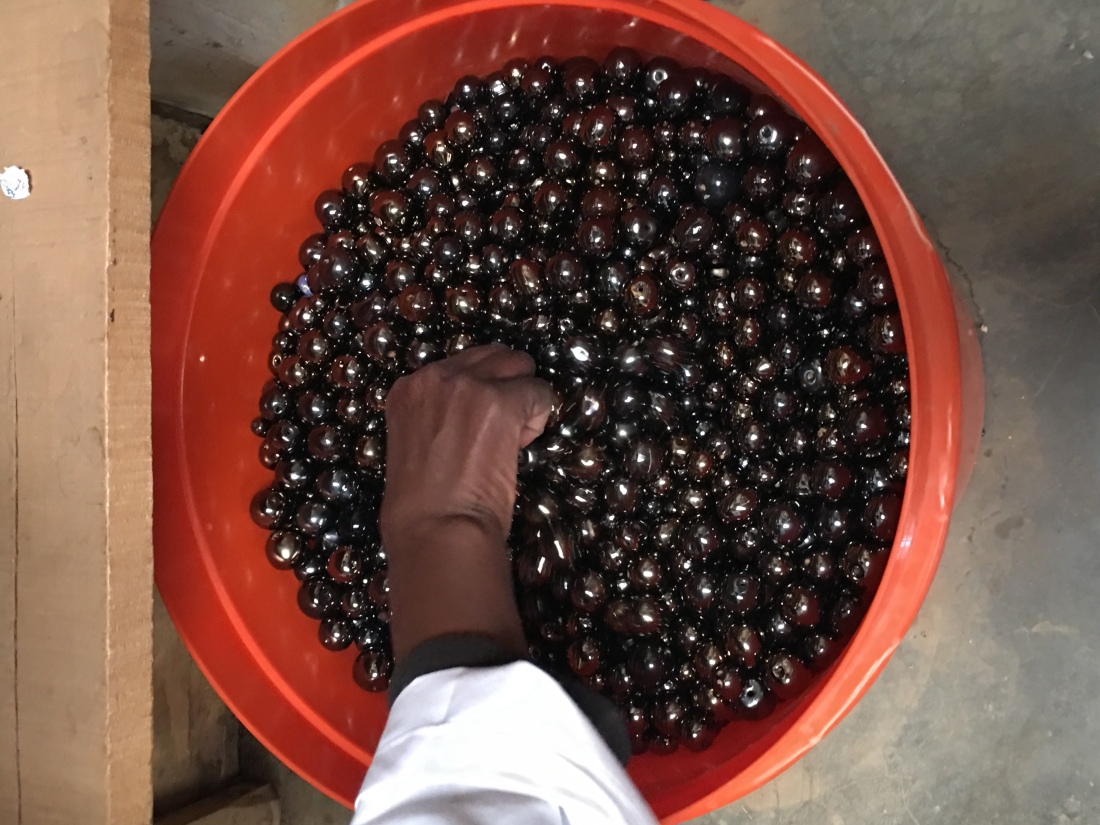 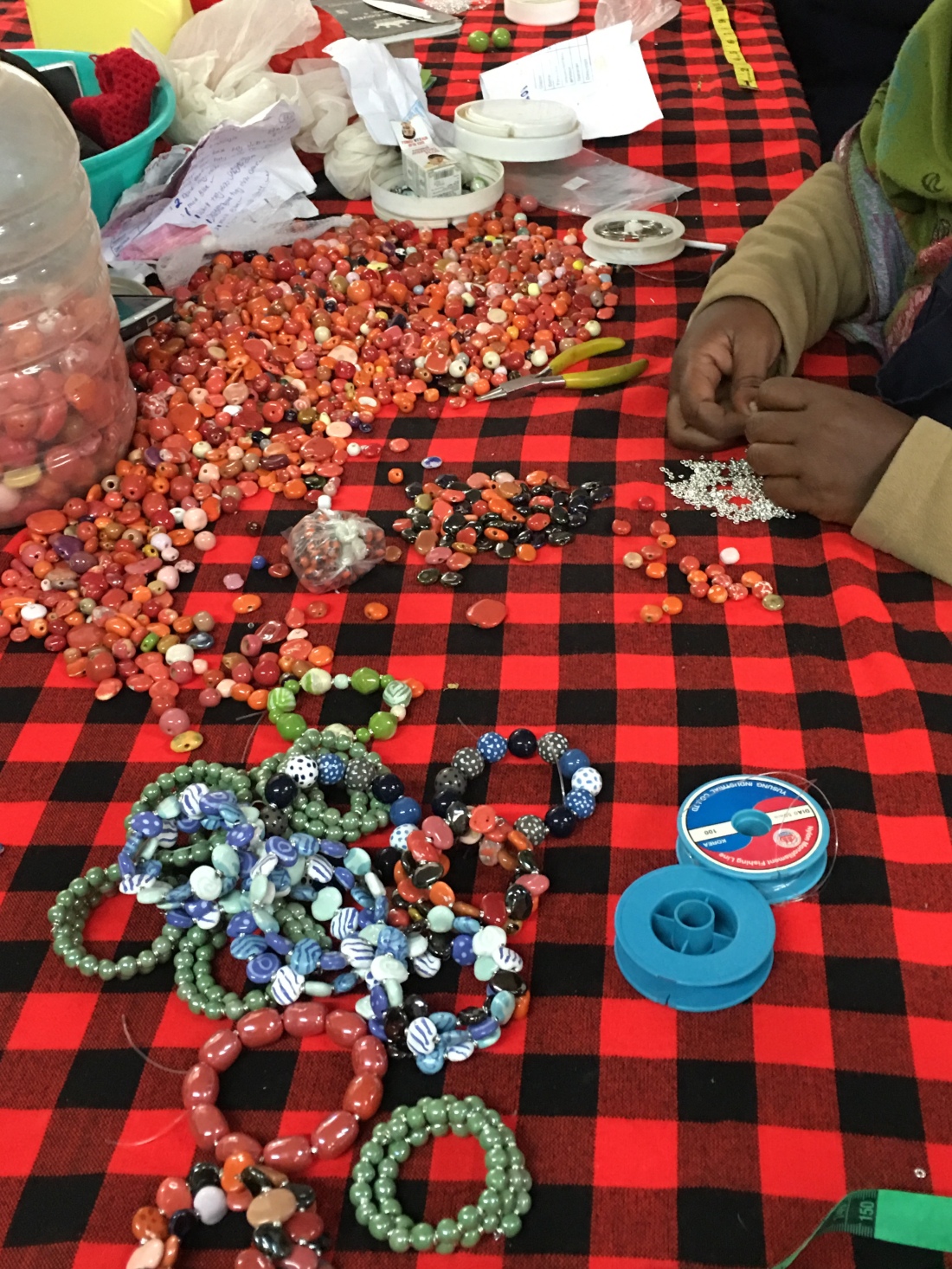 Some of the necklaces had been laid out, ready to string.

And this was the bracelet that I searched for in the shop. My guide put it on my wrist so I could see how these fit. Sigh.

They also used the beads for individual artistic creations, such as this macrame!

The pottery pieces take a different route through the factory. They are also glazed and baked, but the process is slower and takes more room because of the different shapes. 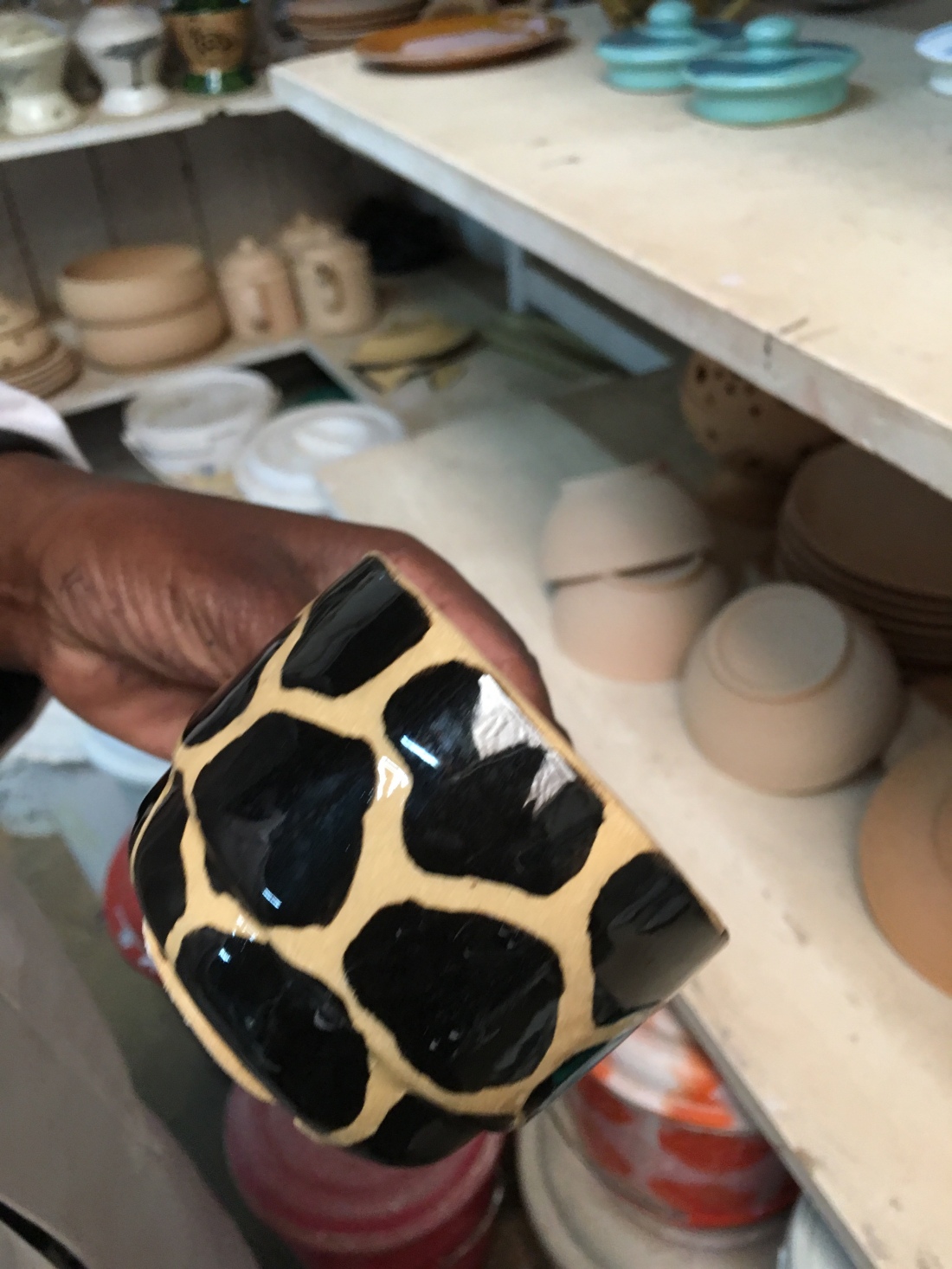 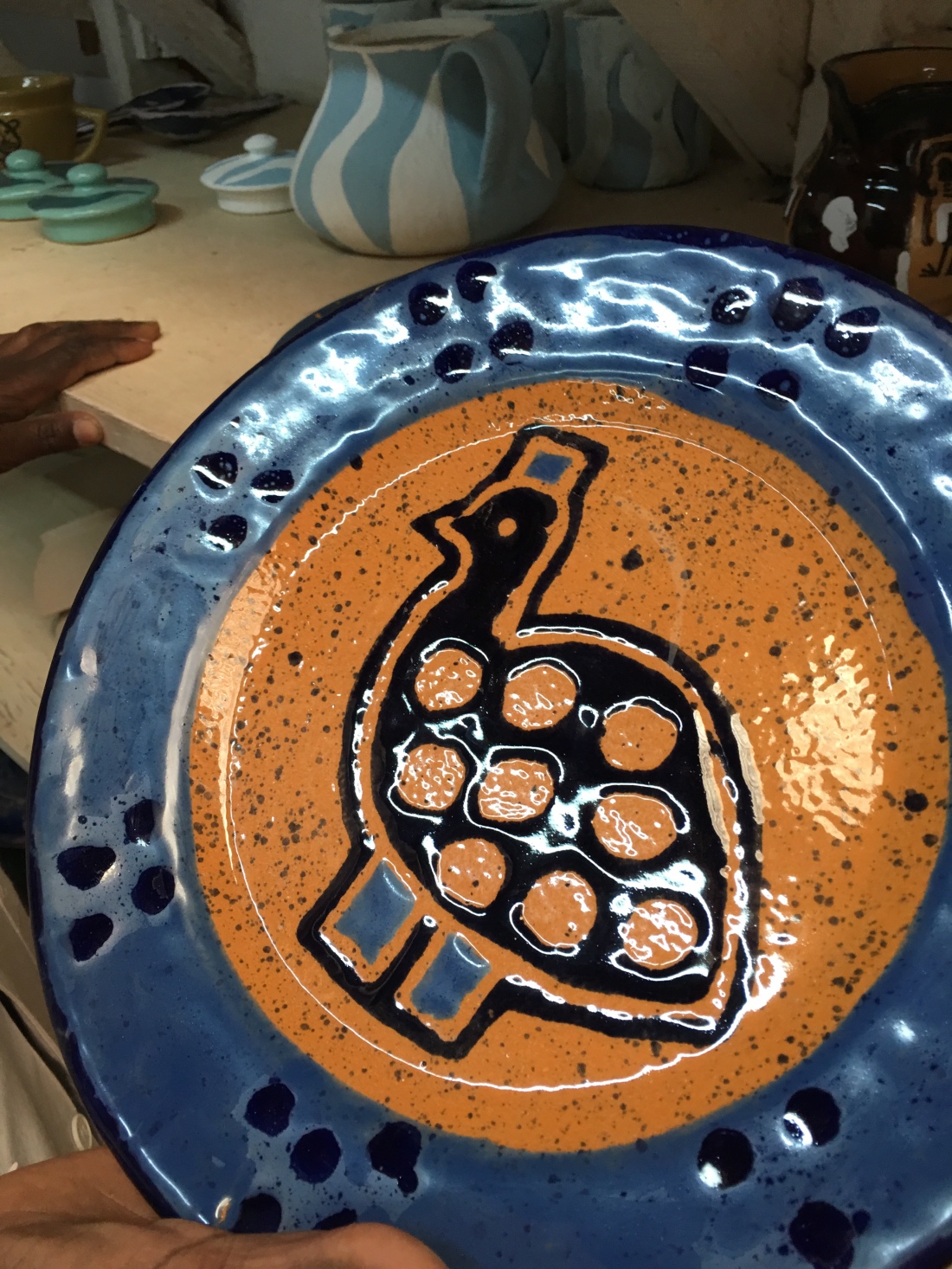 The kilns for these pieces are also slow to fill, but here it’s a matter of fit, rather than numbers.

Here, the kiln bakes for longer, but also has to cool for several days to avoid cracking the pieces when it is opened.

And here is their first kiln! It is still used for custom pieces because it can accommodate flexible schedules. But it shows how much the business has grown.

I had a hard, hard time making up my mind what to buy from their shop, it was all so appealing. I looked and looked for the bracelet I had tried on in the shops, but it turned out to be part of a special (and exclusive) order for an overseas store. (Darn.) I found another that I liked, of course, but I will be perusing their on-line catalog for that “one.”

Their website is kazuri.com. That will lead you to the distributors in the other geographic areas, and also if you would like to join their distributors’ network and sell wholesale.