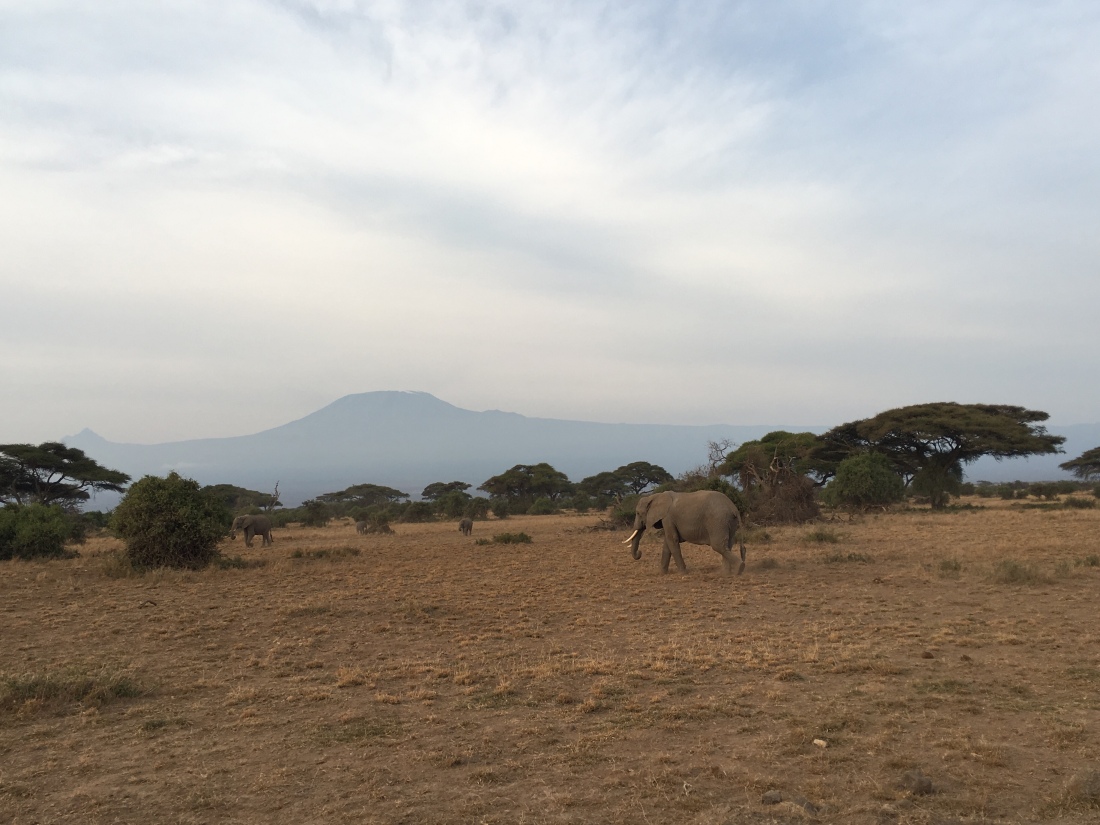 Our last destination was Amboseli National Park, located southeast of Nairobi, Kenya. The park is about 151 square miles in area. The area was created as a reserve in 1906 by the British, and was designated a national park by independent Kenya in 1974.

Elephants are the most conspicuous animals in Amboseli NP in size and in numbers. More than in the other parks, the “family-ness” of elephants was on display. The various groups of elephants moved together – the matriarch, other adult females, and the youngsters, both male and female. At a certain age, the young males are pushed out, separated from the matriarchal family, but not necessarily alone – other young males band together and move around on their own as they mature. Sometime in their future, they may challenge an established bull elephant. If successful, they will become the new dominant male. These fights are usually not deadly – the displaced male then becomes a loner or may join with other males.

We did not witness any such challenges, but other behaviors were on display. Elephants need a lot of food and water to drink and to bathe, so their movements during a day are focused on finding food and water. “Food” means tree foliage and branches – elephants are browsers and tree leaves and branches are their first choice. It does not take much experience to recognize where elephants have been. Their trunks are strong and very effective at ripping tree branches from trees, and elephants leave a mess behind.

In the early morning in Amboseli, the elephants were in the southern area of the park, ripping apart the trees that grow there in the shadow of Mt. Kilimanjaro. Saying that elephants are big and strong may elicit a mental “well, duh” from the reader, but it takes on serious meaning when seeing the trees get taken apart like stalks of celery. Watching elephants pick up the tree branches left on the enclosure floor by a zookeeper is not the same thing.

The elephants then started moving northward, away from Mt. Kilimanjaro, and headed toward the springs where water has gathered into large, mostly shallow lakes. 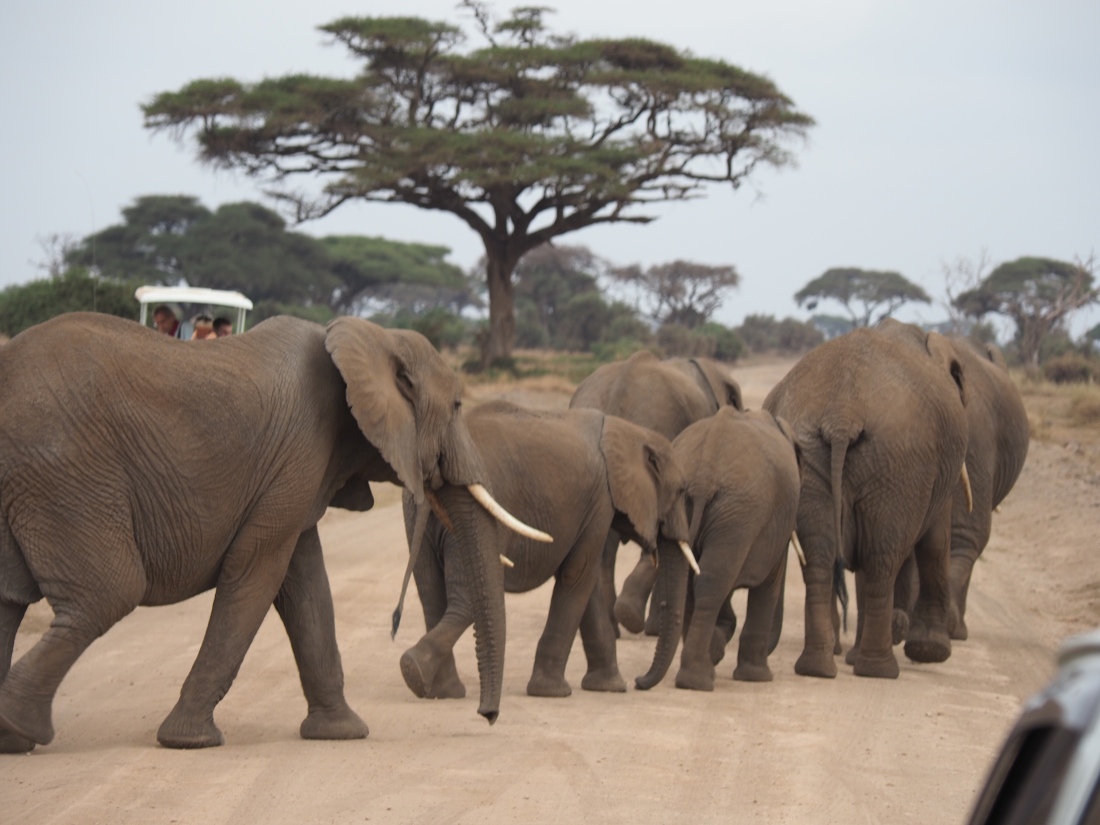 The longest tusks in the group belong to the oldest female elephant. Tusks, which are essentially elongated teeth, grow all during the elephant’s life. They can be broken off, and elephants with one shorter tusk are not uncommon. 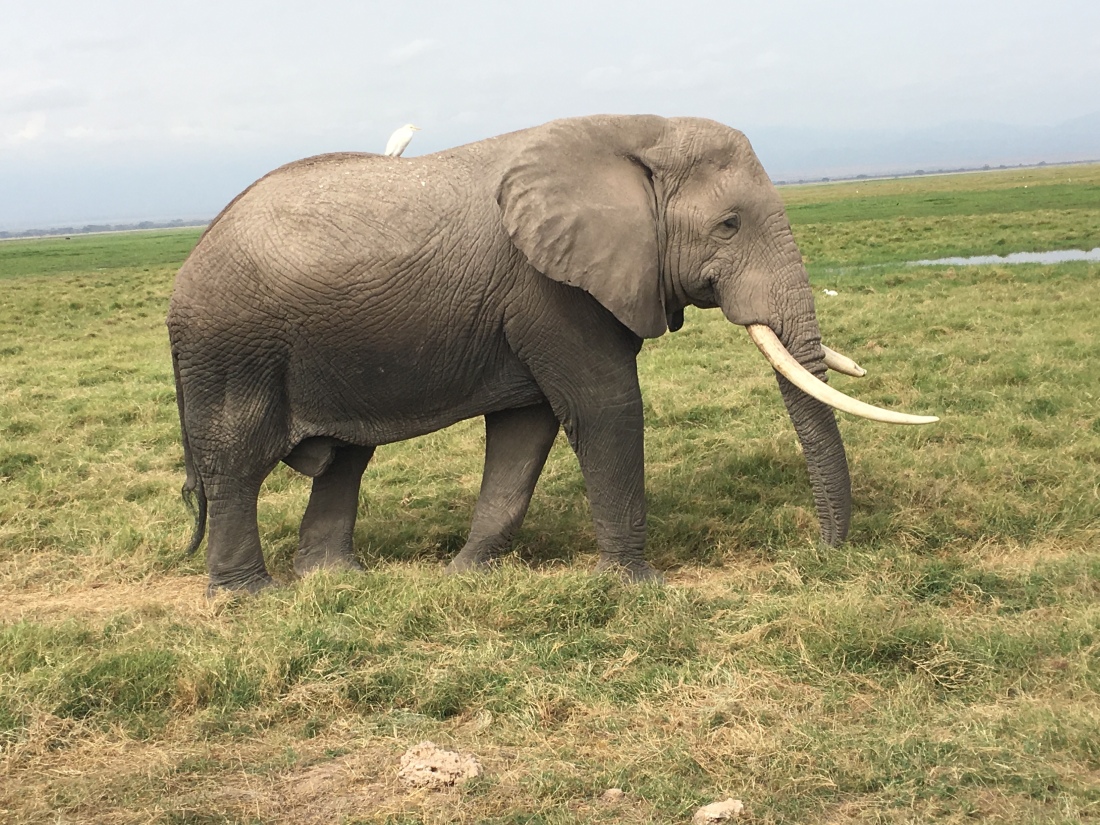 The average size of tusks is shrinking, however, because of poachers who kill faster than tusks grow. Several African nations fight against poachers in efforts to conserve resources. Greed and poverty are powerful adversaries, but education is helping to enlist the help of citizens.

Birds and other animals love these lakes, which grow the food that they need: smaller water creatures and algae. Ibis, saddle-billed storks, and crowned cranes are among the birds who favor the shallow lakes, along with flamingos. Immature flamingos are gray. 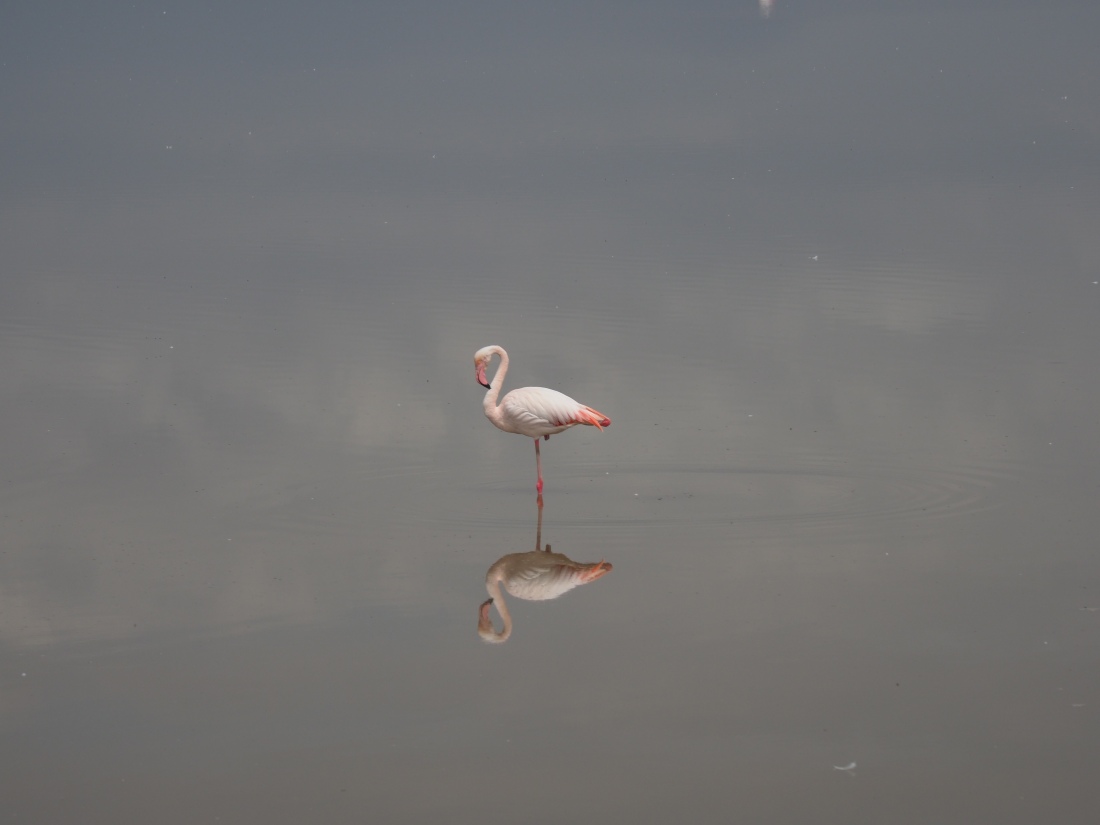 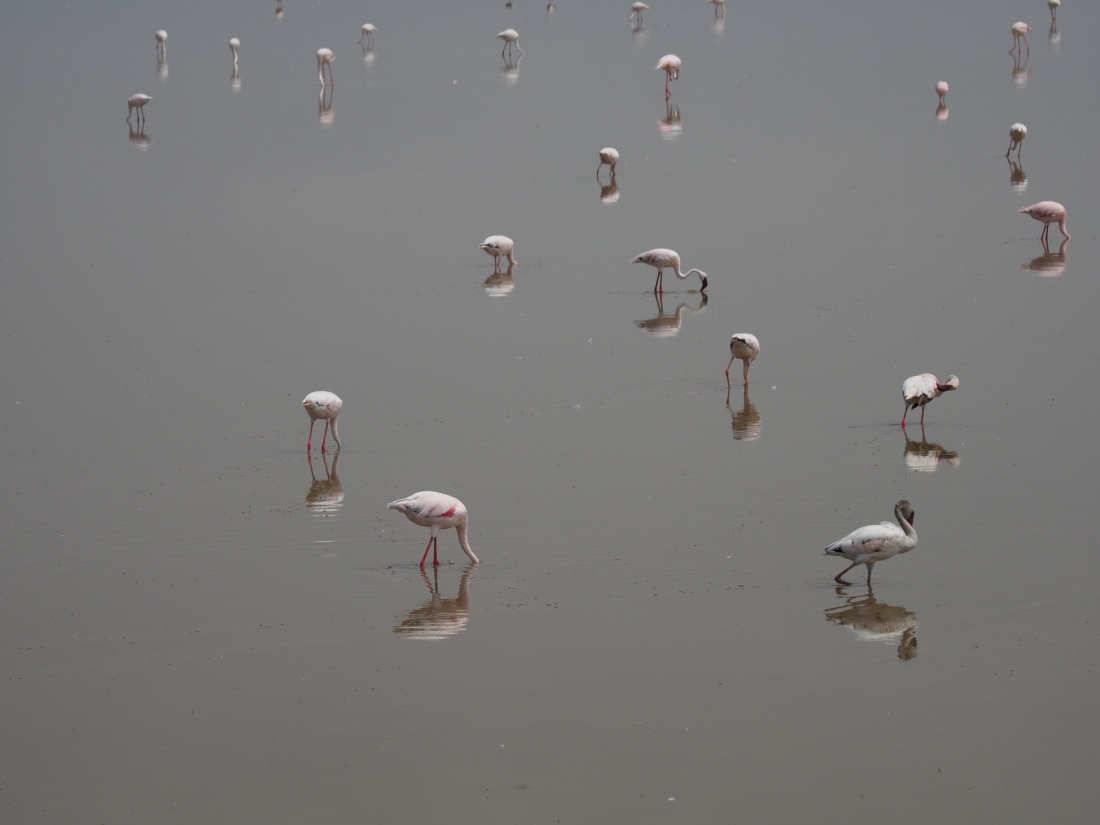 In some deeper areas of water, grass has grown up to be quite tall. The water, although several feet deep, is obscured by the tall grass, and the only way an observer can tell that the water is deep is by how much of the elephant is hidden from view, and the “high water marks” left on the elephants when they emerge.

Elephants eat grass, not by grazing (tusks get in the way,) but by grabbing a trunkful of grass, pulling it up from the wet ground, and thrashing it around a bit before they put it into their mouths. It was clear that the water cooled them off, soothed their skin, and generally felt good, perhaps also taking some weight off their feet.

Birds enjoy riding on the backs of elephants, eating the insects that attach themselves to elephants. Elephants like this, too, and are very tolerant of the birds.

The zebras are beautiful in Kenya. They have crisp stripes from head to hoof, even on their ears, and interesting designs on their backs and faces. The stripes on each zebra are supposed to be as unique as fingerprints. The female on the right in the photo below is pregnant, and her not-quite-full-grown foal is on the left. 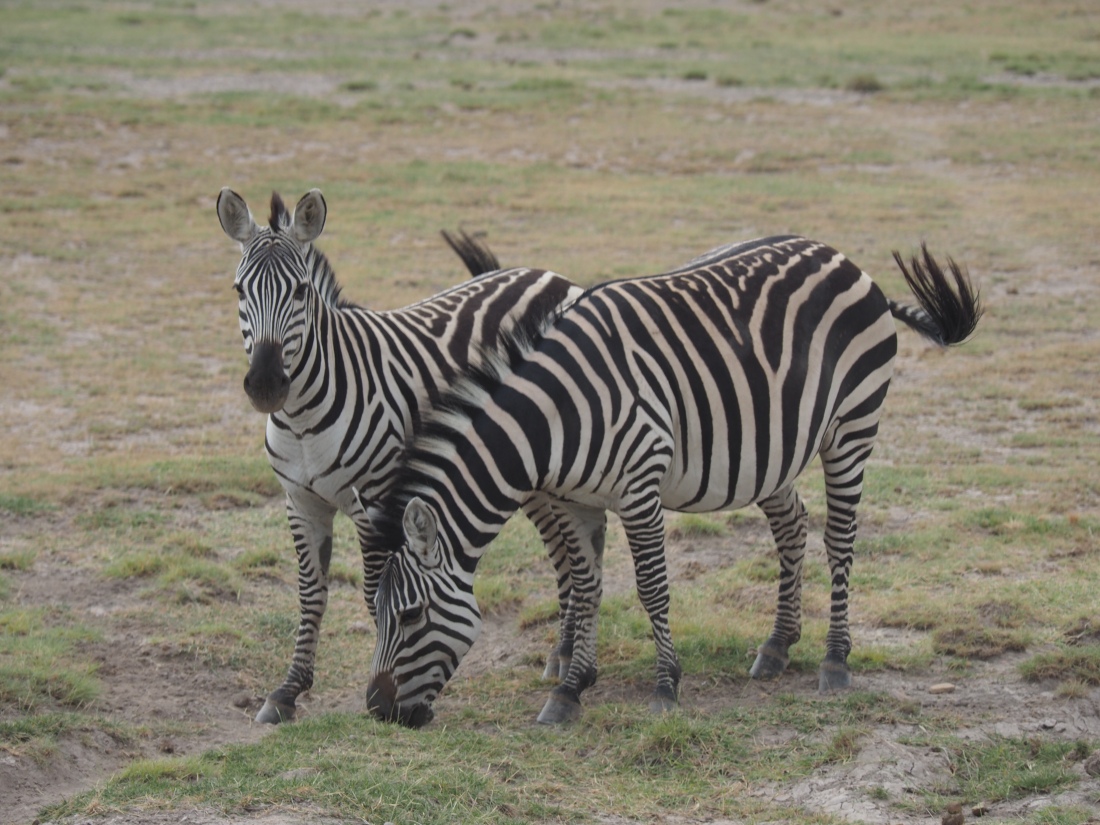 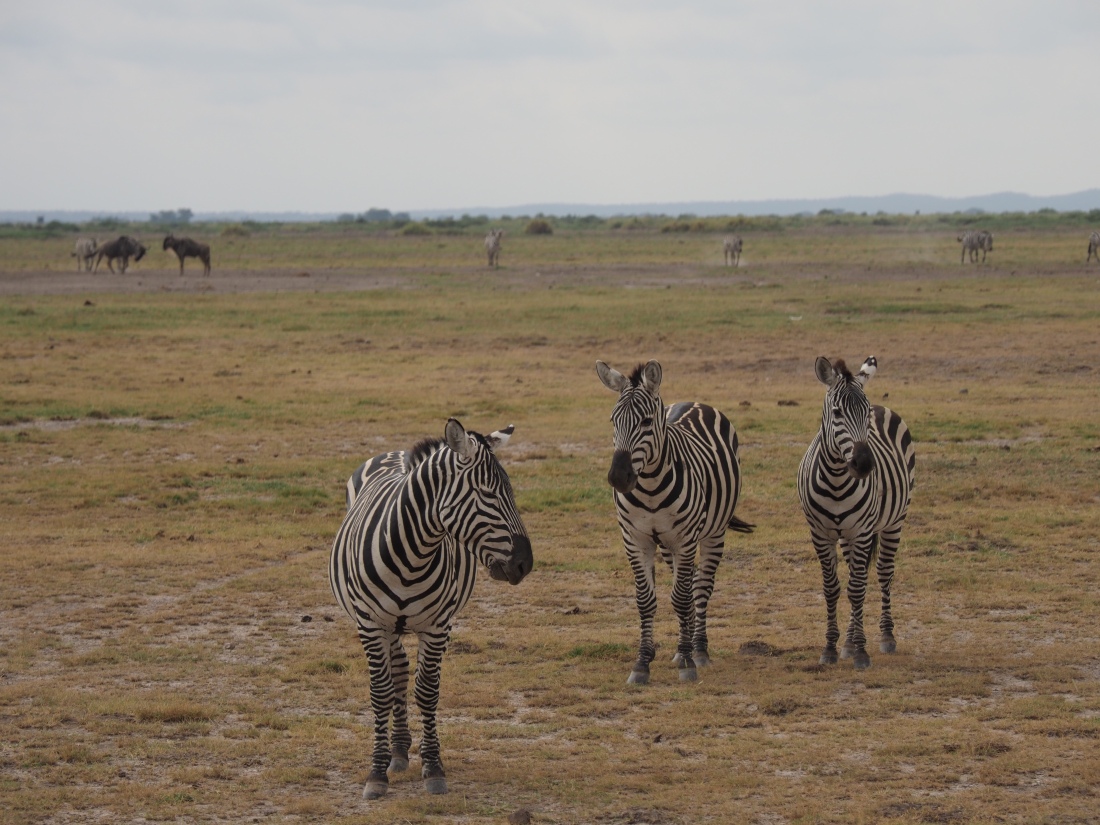 Elephants and zebras seem to get along with each other well enough, although the zebras make way for elephants without much prompting.

Elephants and wildebeest, not so much. Tahila, from Israel, shared that she had read that elephants don’t like wildebeest, and asked Evans, our guide, about this. Evans was amused by the idea, but non-commital about the accuracy.

I still do not have a definitive answer about this, but I can tell you what we witnessed. A group of elephants was coming toward our van, a matriarchal group with elephants of all ages. Between the elephants and our van was a small herd of wildebeest, lying on the ground, resting after grazing for a while.

The wildebeest scrambled to their feet. It seemed as if the elephants then started moving faster. Their heads began to bob up and down in their hurried walk (elephants don’t really run, they “power walk”) toward the wildebeest, the way a toddler staggers toward a flock of birds, who then take flight.

The wildebeest hustled themselves out of the way, and the elephants walked over the ground where they had been resting. 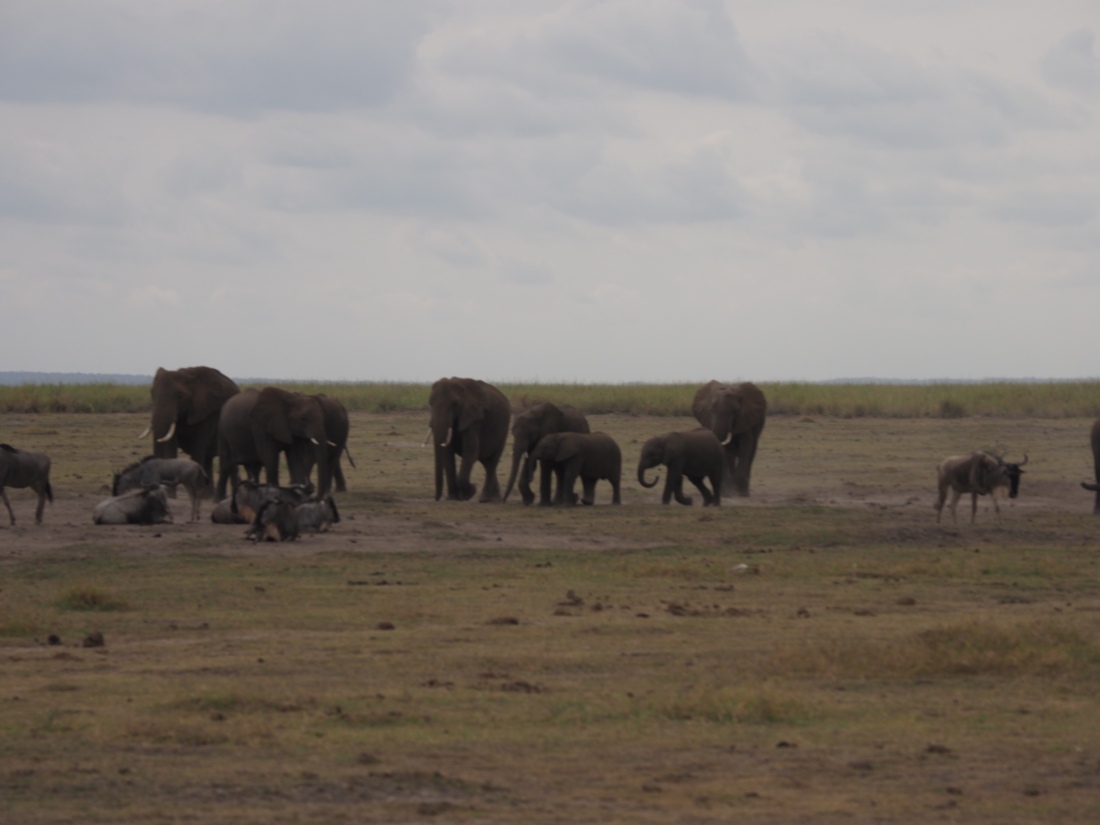 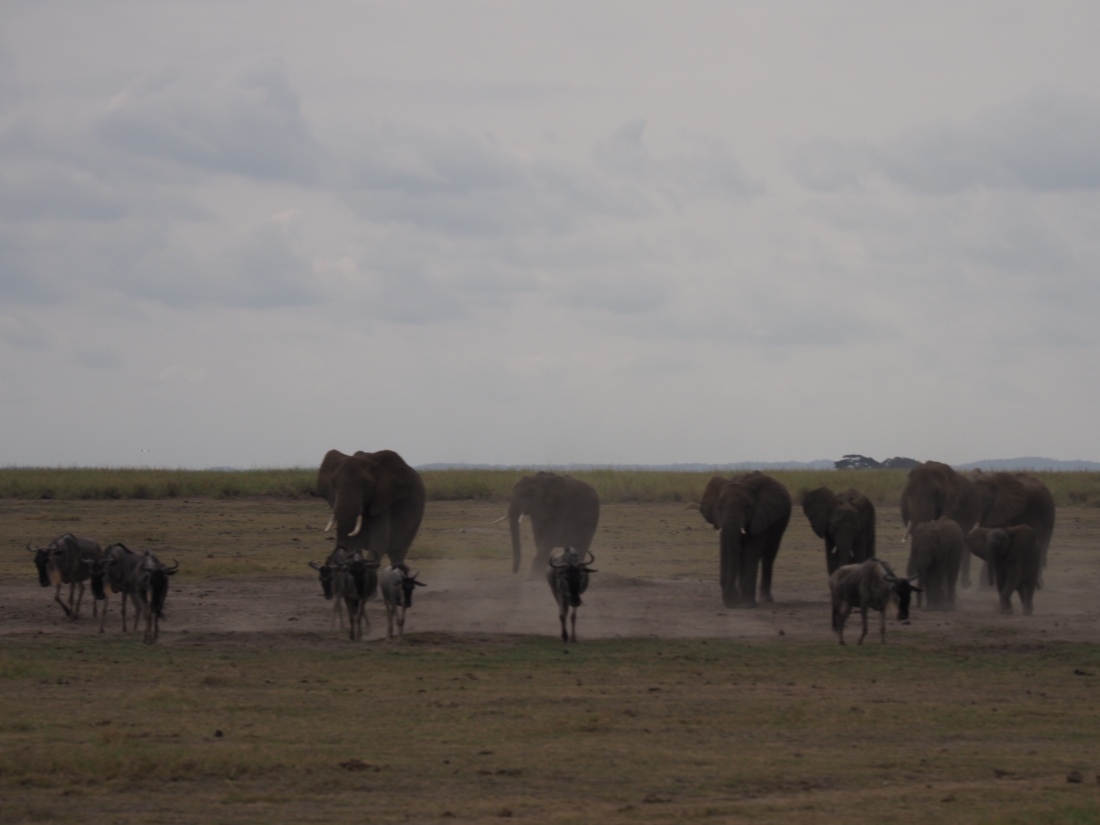 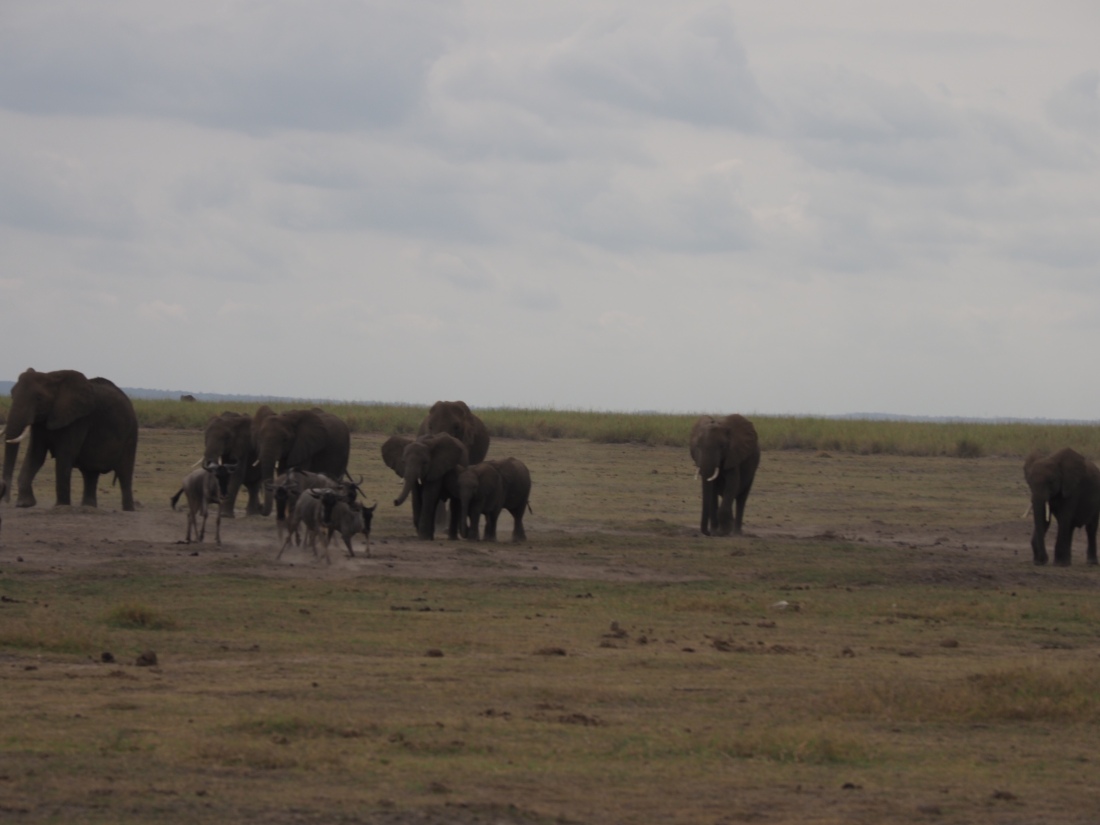 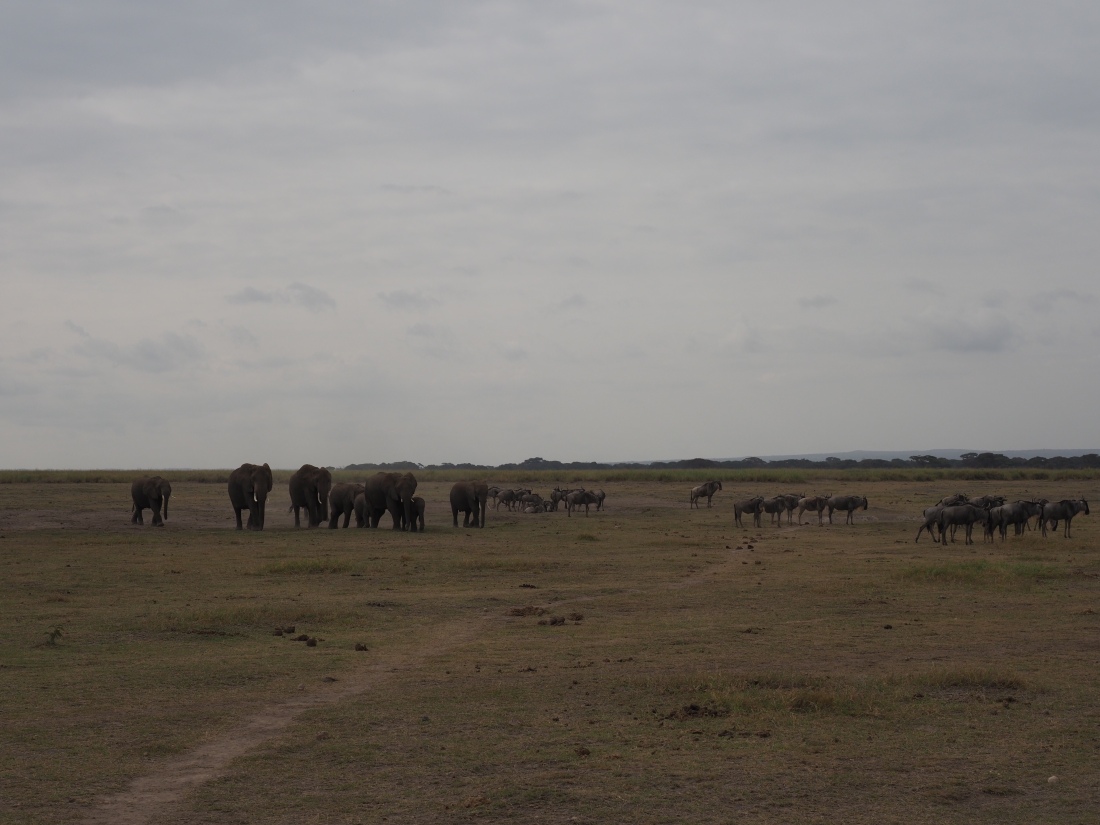 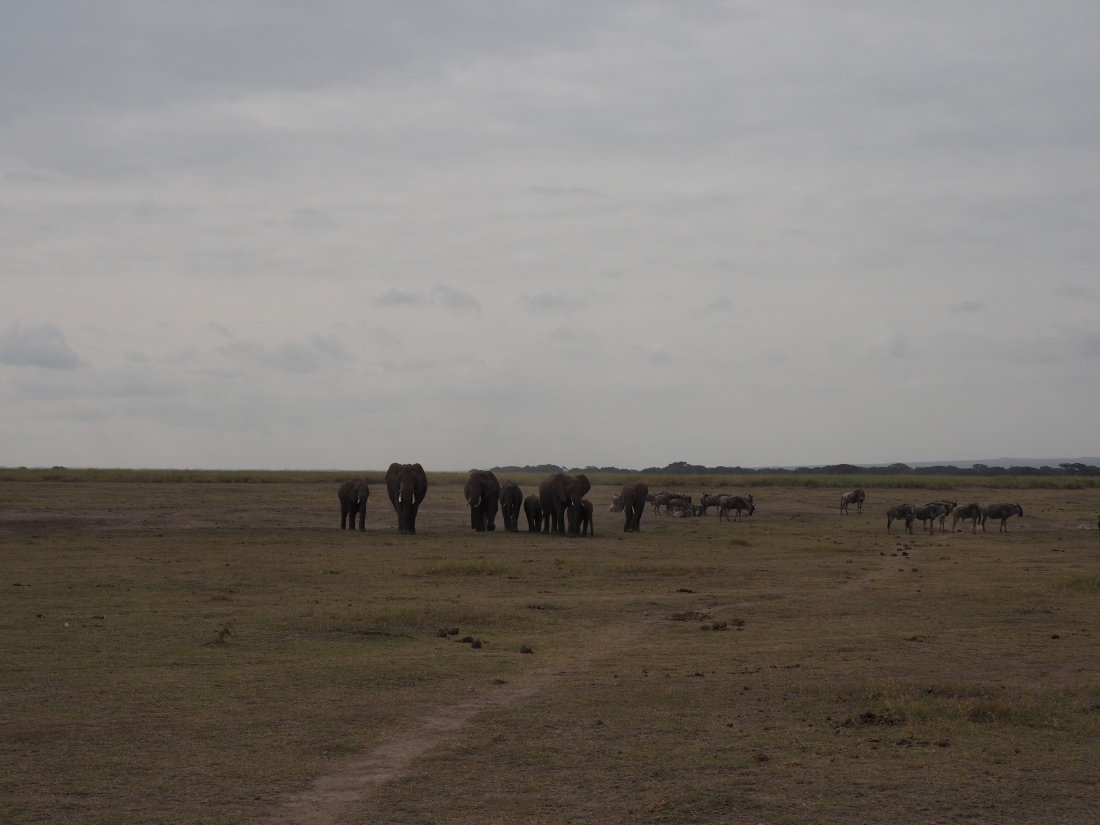 By this time, the elephants were getting pretty close to us, too, so Evans moved us a little further away. Although elephants don’t run like horses, for instance, they can still move up to 30 mph over short distances. Their size means that walking quickly covers a lot of ground, and they can be close before you realize it.

Wildebeest are ungainly-looking animals. Their heads are long, and even though they are nowhere near as massive as American bison, the wildebeest remind me of them. They are herd animals, however, which means that the males vie for dominance and the right to mate with the females.

We came across two males who were testing their dominance near the shallow lakes. There wasn’t much fighting associated with this, just a lot of chasing around, and the current dominant male intimidated the challenger into defeat more than hurting him. The challenger ended up walking off alone and looking a little forlorn. The females remained oblivious. 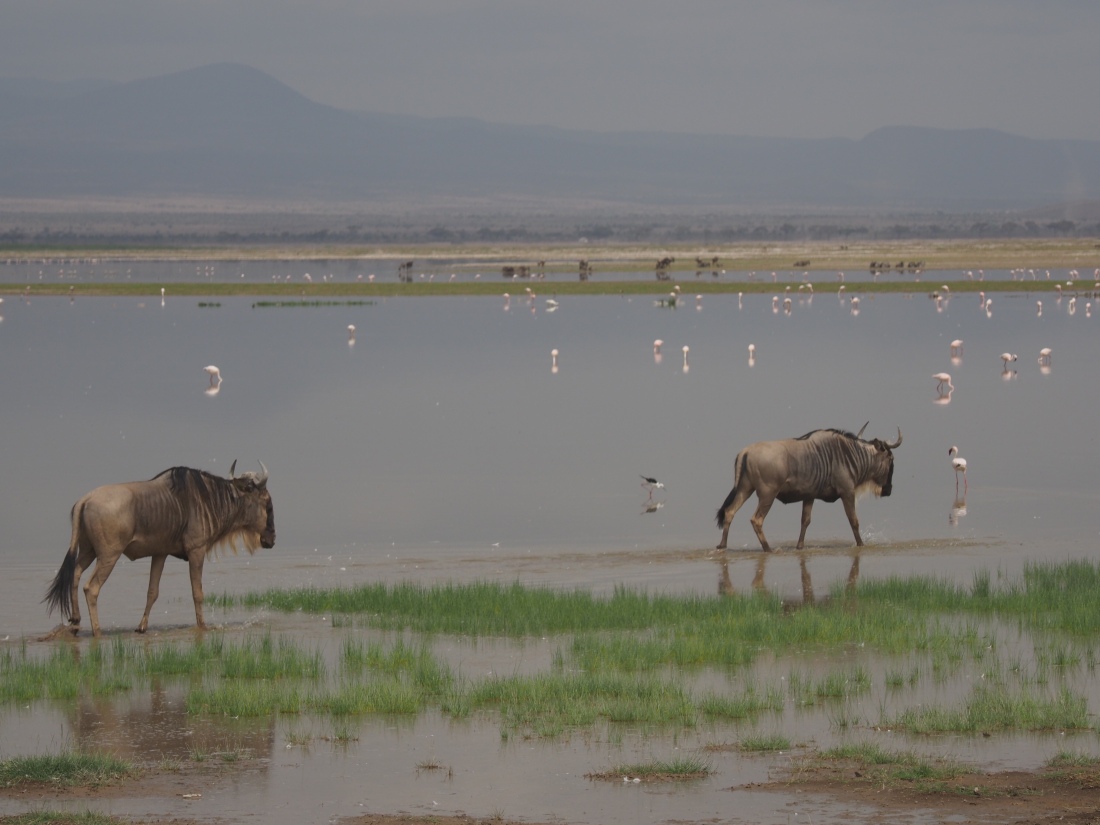 I have no idea if this is the same wildebeest, but he was wandering alone and looking dejected, so maybe.

As we drove over the park roads, David, one of our group, asked Evans what that animal was, “Over there,” he said, pointing to something walking in the distance.

Evans got excited and used his binoculars to get a better look. “That’s a serval cat,” he said. “Usually they are not seen.”

Serval cats are not endangered, but they are very solitary and very shy, so it was an exciting sighting. Frustratingly, it was beyond the reach of my telephoto lens, but I was able to get a distance shot, which I enlarged as much as I could.

After this last day and a half at Amboseli, it was time to return to Nairobi. It was hard, leaving the wildlife behind. It is easy to see how people become lifelong observers. And, it was hard to leave such a congenial group behind, too.

There was one more surprise.

I was lost in a tired passenger reverie. It was Evans who spotted them, crossing the highway ahead of us. We stopped to watch a giraffe family with a tiny giraffe with them. Evans said it couldn’t be more than a few hours old. Giraffes, like most non-predators, get to their feet within minutes of being born, an important survival skill for them. It was a lovely finish to the day.