Masai Mara National Park in Kenya is home to some of the Maasai, one of the largest and best known tribes in Africa. Masai Mara NP is the northern part of the tribal area, which extends into Tanzania’s Serengeti plain. “Maasai” means “the people who speak Maa,” their tribal language, and I learned that “Masai” is the British spelling, still used on maps, “and is incorrect.” Swahili and English are also languages they speak. (Swahili, in case I didn’t mention it earlier, is a mash-up of Arabic and native East African languages that developed in the early centuries, the result of Arabic traders coming to Africa.)

The lands that are occupied by Maasai are about 160,000 square kilometers, and the majority live in Kenya, although most of the land is in Tanzania. It is not known exactly how many Maasai there are, because the Maasai consider census-takers to be a nuisance, and the response varies – some Maasai groups report several times their population, whereas others refuse to report at all. I found estimates that differed by about a million, anywhere from 500,000 to almost 1.5 million. However many there are, the population is divided into sixteen sections, each with their own name.

Masai Mara and Amboseli National Parks in Kenya, and Serengeti National Park and Ngorongoro Crater in Tanzania are located within the traditional Maasai lands. These parks and other reserves are protected areas, set aside for tourist activities such as wildlife viewing, and for conservation activities. Maasai are prohibited from accessing the water sources or using pasture land within the reserves, which is a source of friction.

Traditionally, Maasai people have lived in “kraals,” circles of land fenced with acacia thorns to keep lions from attacking their cattle and people. Men were responsible for building and maintaining the kraal fence and those who were warriors provided security for the kraal. Women built the loaf-shaped houses with mud, sticks, grass, cow dung, and cow urine. After the house was built, women supplied water, collected firewood, milked the cattle, and cooked for the family. Boys herded cattle and goats, although both boys and warriors herded animals when drought forced grazing in a wider area. Girls were not mentioned, so I surmise that they stayed with the women to help and learn. Elders provided advice and direction.

The diet of the Maasai was very limited: meat, milk, and blood. Even then, the blood, collected by piercing a cow’s neck vein, was used for special health conditions, such as pregnancy, post-childbirth, circumcisions, and illness. (Elders drank blood to assist recovering from a hangover!)

Maasai are semi-nomadic, and their tradition was communal land management. Even now, they feel that this provides the best opportunity for sustainable utilization of the land they have. Each of the sixteen sections manages its own territory. Under normal conditions, i.e. non-drought, reserved pastures lie fallow, guarded by warriors, and are used in turn. Under harsh drought conditions, animals are grazed over entire areas until the rainy season begins.

These days, Maasai sell livestock products to other groups in Kenya, and they purchase clothing, grains, and beads used in crafted items. Cows and goats are sold to buy school uniforms and pay school fees, and Maasai have become more entrepreneurial, marketing their crafts, grain, charcoal, and even cell phones.

Maasai grow crops such as maize (corn,) rice, potatoes, and cabbage, which they call “goat leaves.” In areas where plot size will not support cattle, crops like these have become the main mode of subsistence, but this causes friction among the Maasai. Traditional Maasai believe that crop farming is a crime against nature – cultivated land is no longer suitable for grazing.

Land ownership, not a tradition for these semi-nomadic people, was introduced in the 1960s by the British, and was continued by the Kenyan government in the 1980s. The land was divided into group “ranches,” then individual ranches. Some Maasai subdivided the land into small plots that were sold off to private developers, similar to what happened with Native American reservations in some areas. Not only were Maasai holdings reduced, but some Maasai increased their personal wealth. This was perceived to be at the expense of other Maasai, and therefore another source of friction.

Subdivision reduced the amount of land for grazing, but the largest land loss was to game reserves and national parks, because the Maasai’s use of the land is restricted. The land available for cattle and even for crop production has been reduced, and many Maasai, once proud and independent, now live in poverty and are dependent on relief food. Many Maasai blame this on the imposition of foreign concepts of development.

The camp where we were staying helps support the local Maasai village by hiring three or four of their warriors to guard the camp at night. These warriors came at dusk, joining guests around the fire pit. It was a little like being at one of those historical sites that employs people to play the part of a soldier or other resident, a historically accurate version of a person living at the time of the historically significant events of the area. The Maasai warriors would explain some of their customs, how they became warriors, and their daily lives.

They had a practical function as well as the cultural one, however. The camp was frequently visited at night by hyenas, wild dogs, and other hunters, wandering through looking for dinner, and the Maasai would chase them off. They told one horrible tale of the owner’s pet Labrador retriever, who was taken by lions one night. The poor dog did not survive and could be heard screaming as it was dragged away. I am grateful that I missed that incident – I’m certain that nightmares would have ensued.

Part of the safari’s itinerary was a visit to a Maasai village, and so when we left the camp that morning, our destination was the local village instead of the park and wildlife.

The Maasai men are tall and slender. They were wearing their colorful blankets and carrying wooden staffs when they came to greet us. The chief’s son was part of the welcoming party, and extended greetings on behalf of the tribe.

The men lined up and began a dance – a leader (not the chief’s son, but another) led the line in a circle, as they chanted, each making a particular sound, and the sounds melded into a very musical “song.” I couldn’t pick out words – it seemed mostly a harmonious collection of sounds at various pitches and speeds. The leader made a very unique noise, a very low bass sound that came from deep in his throat, sounding almost like a bull frog, but not. It was a unique sound. I asked afterward – I was next to the chief’s son – whether there was special training to be able to make the sound. He said yes, that a boy would be identified as having a suitable voice, and then would be taught to produce the sound at various rhythms. It was percussion-like and so I suppose keeping the proper rhythm is what made them the musical group’s leader. 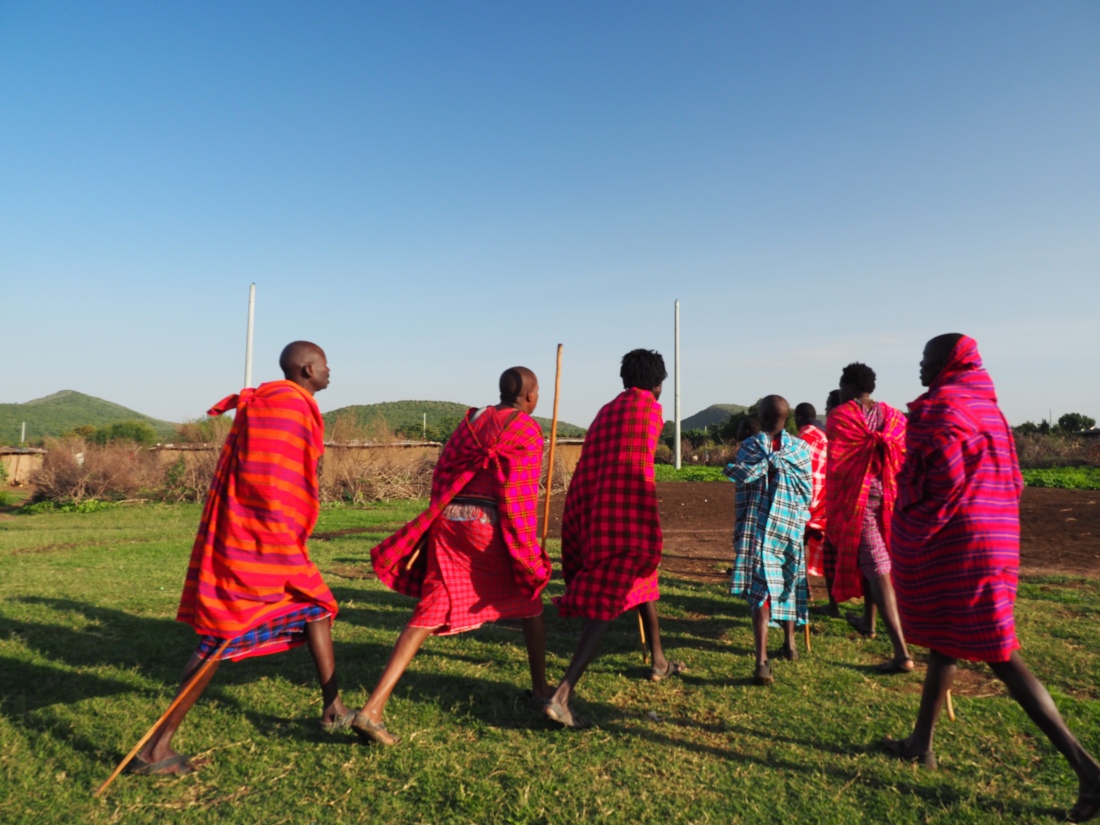 As the men stopped, they formed a sort of line, and then they proceeded to begin jumping. Jumping among men is competitive – high jumpers are admired and apparently the women find it attractive.

After a few jumps, they came over and invited one of our group, Aaron, to join them. It was an interesting choice – Aaron is tall and slender. It’s easy to pick him out in the photo, but at the same time, he fits in with the Maasai warriors. 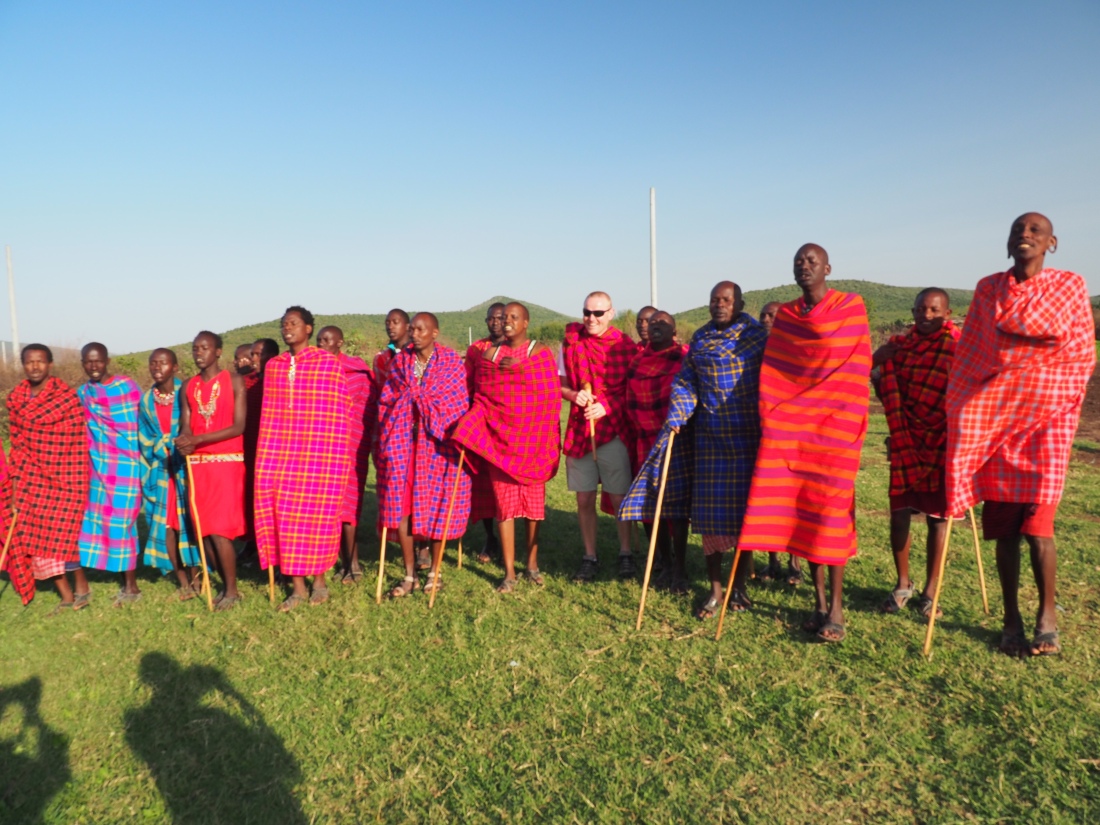 The Maasai warriors next showed us how they build a fire with only wood and dry grass. They are proud of this because it is an important skill that hunters use out on the Savannah. The warrior blowing on the grass to help the fire grow is the chief’s son.

Mari tried to start a fire. Not as speedy, but a good showing! 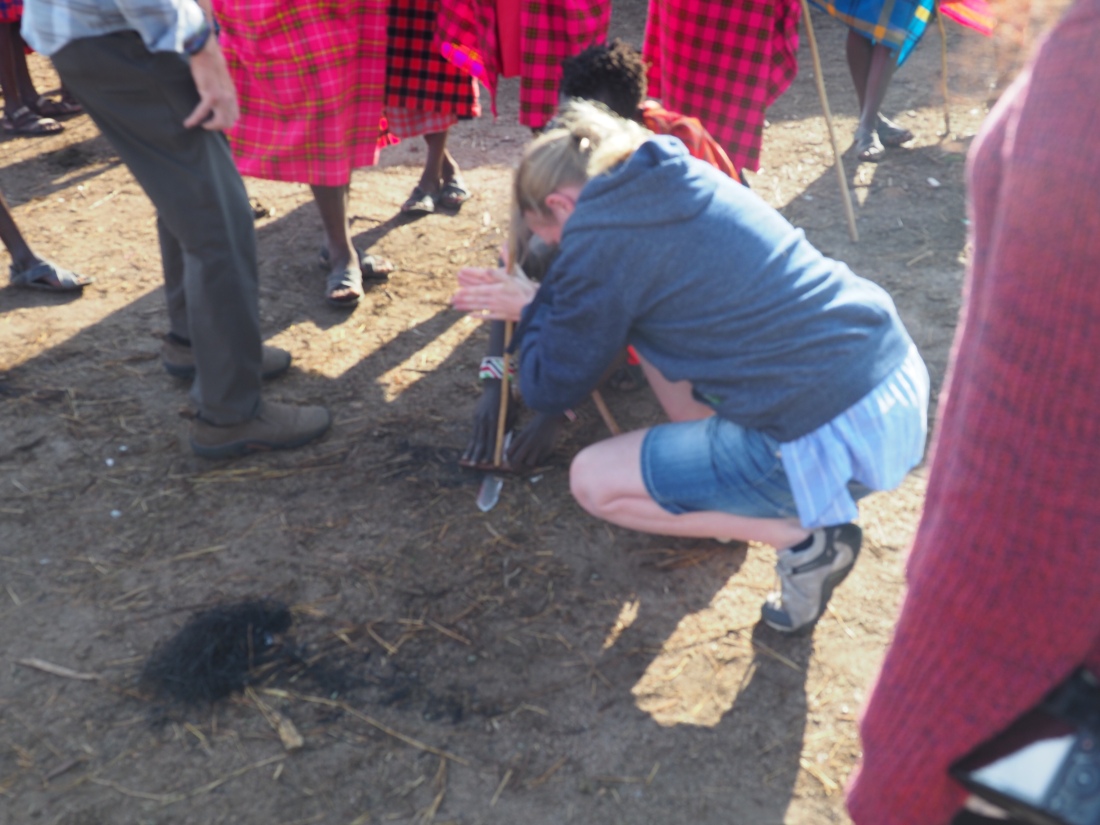 We – the visitors – were then invited in small groups into the villagers’ homes. The homes are made by the women. They are built of mud with separate, very small rooms for special purposes. They have a small kitchen area that holds the fire that heats the home and cooks the food, a room where the husband and wife sleep, and a room where the small children sleep. Not much else. The mud insulates the interior, but it is dark inside. The people live outside most of the day, so the main function of the house is shelter at night and protection from the cold and heat when needed.

I was invited by the chief’s son to come into his home. It was he who explained the functions of the rooms to me. We chatted for a few minutes as he told me about how the Maasai want to keep many of their customs and traditions, but also recognize that Africa is changing.

The most interesting thing that he told me was that traditionally, when a member of their tribe dies, their body was taken to a place outside of the kraal and left for scavengers. They did not have any traditional death rituals, nor any tradition of an afterlife.

I asked what, if he was able to speak to the world about the Maasai, what he would he want to tell them. He said, “We do not circumcise our girls anymore. We have one wife, and we share with them everything that we have.” Their children go to school. Their boys still learn to be warriors. But, rather than each warrior killing a lion as part of their initiation, they initiate boys at five-year intervals and they kill one lion as a group to symbolize their initiation. In his group, he was the one that killed the lion.

I have not mentioned the women much, because they were absent from the activities. They are the crafts and marketing division of the tribe, it turns out. The women had set up tables in a circle, displaying the things that they made – many beaded items, necklaces, bracelets, carvings, and copper bracelets – for tourists to buy. I was the last tourist out of the houses because we had been talking, but I bought some of the jewelry. The chief’s son gave me his bracelet – it was too big for me. Still, I felt honored by the gesture, and I wore it as we drove away.