We were out bright and early the next morning. Animals are most active in the early morning, and we were excited to find that the cheetah brothers were awake and active.

As we followed them in the van, it appeared that they were oblivious to our existence. They were not oblivious to the smell of an intruder to their territory, however. 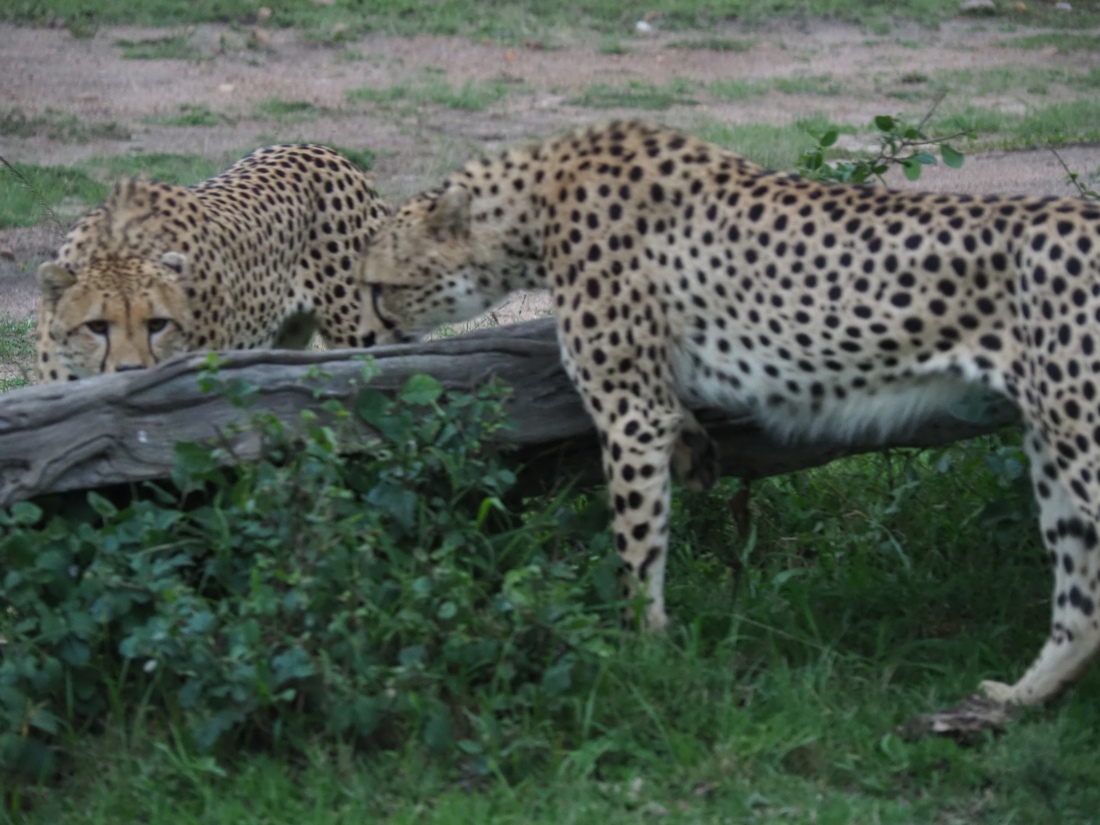 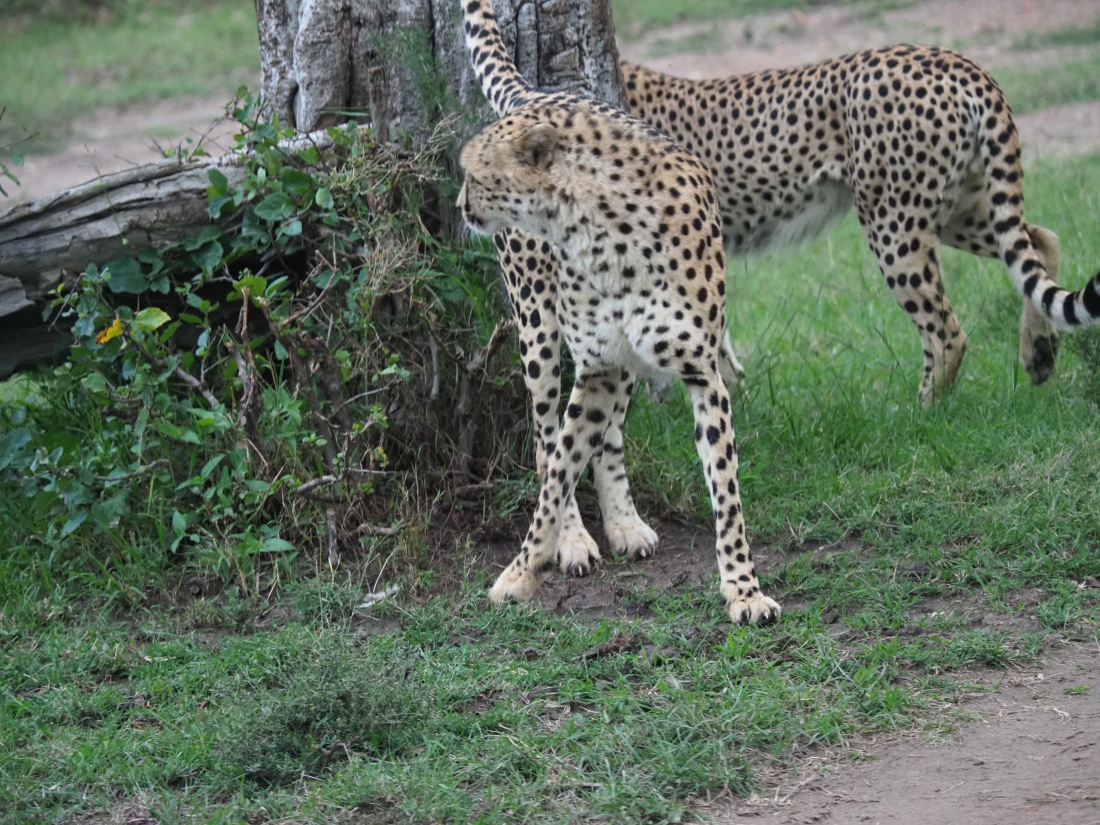 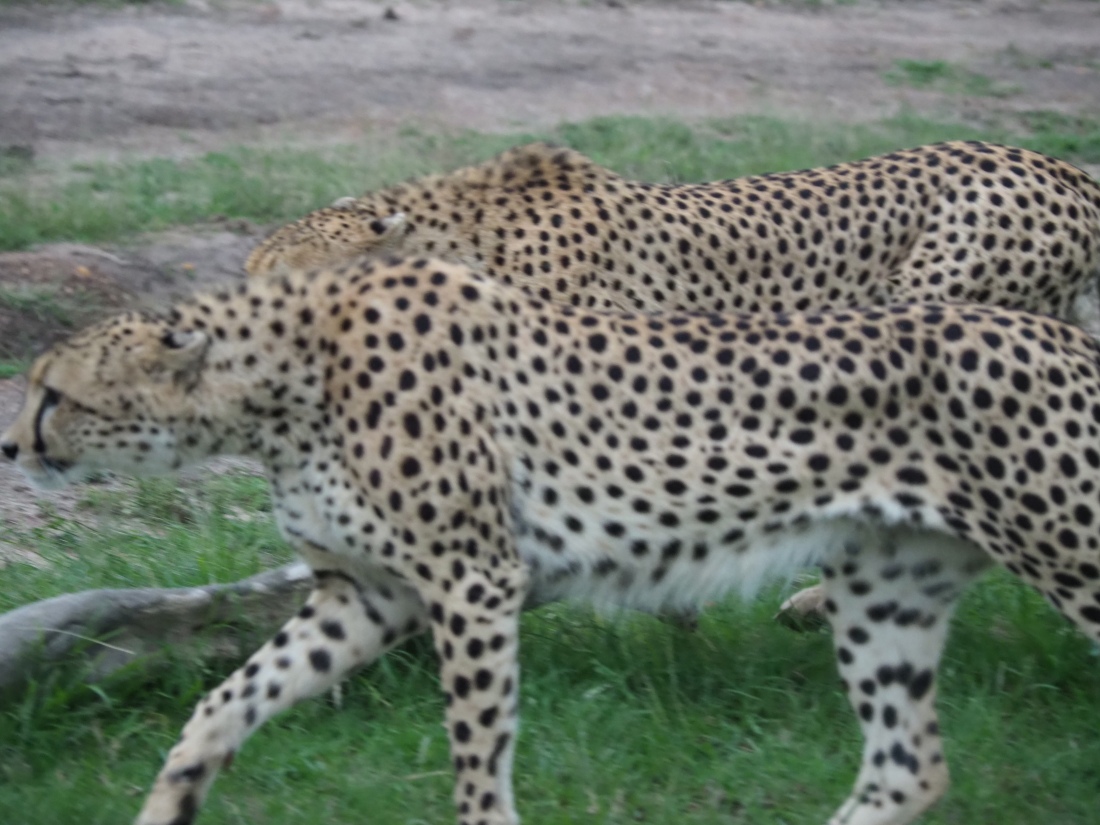 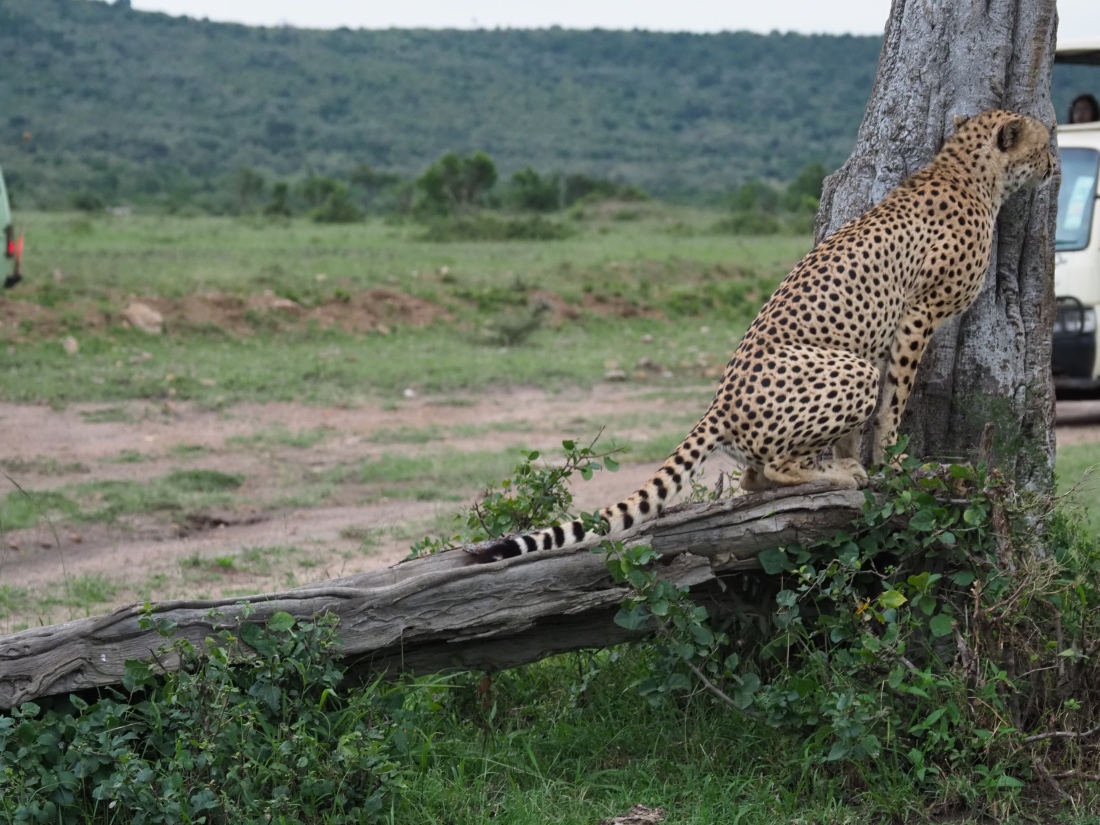 Having no luck in spotting the interloper, they promptly took care of the scent problem.

We followed them for a while. It seemed as if they might become serious about hunting something. 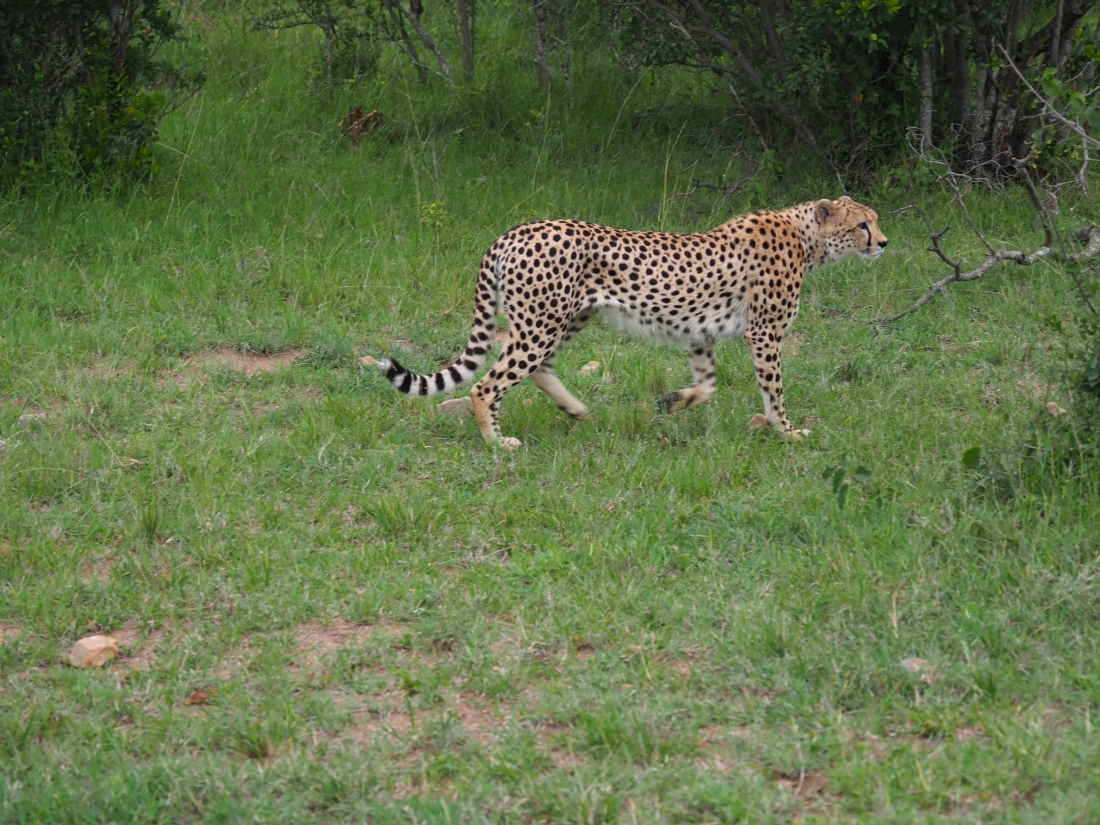 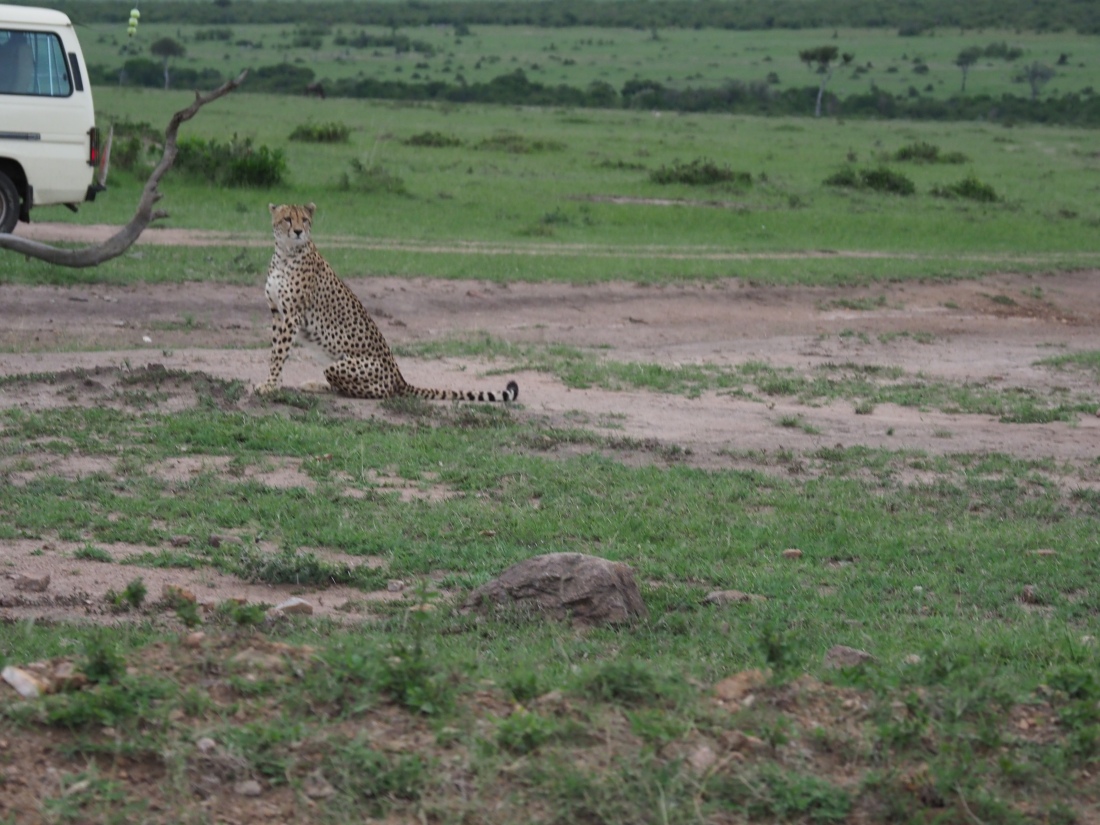 But, no, not hungry enough yet. Predators do not hunt unless they are hungry, which is one reason that predators and prey can sometimes be found sharing a water hole or otherwise being in relatively close proximity to each other, like this hyena and the wildebeest. Although hyenas are regarded primarily as scavengers, they also hunt and kill when they are hungry. Likewise, lions are not above scavenging or stealing another predator’s kill, even though lion prides are regarded as hunters. 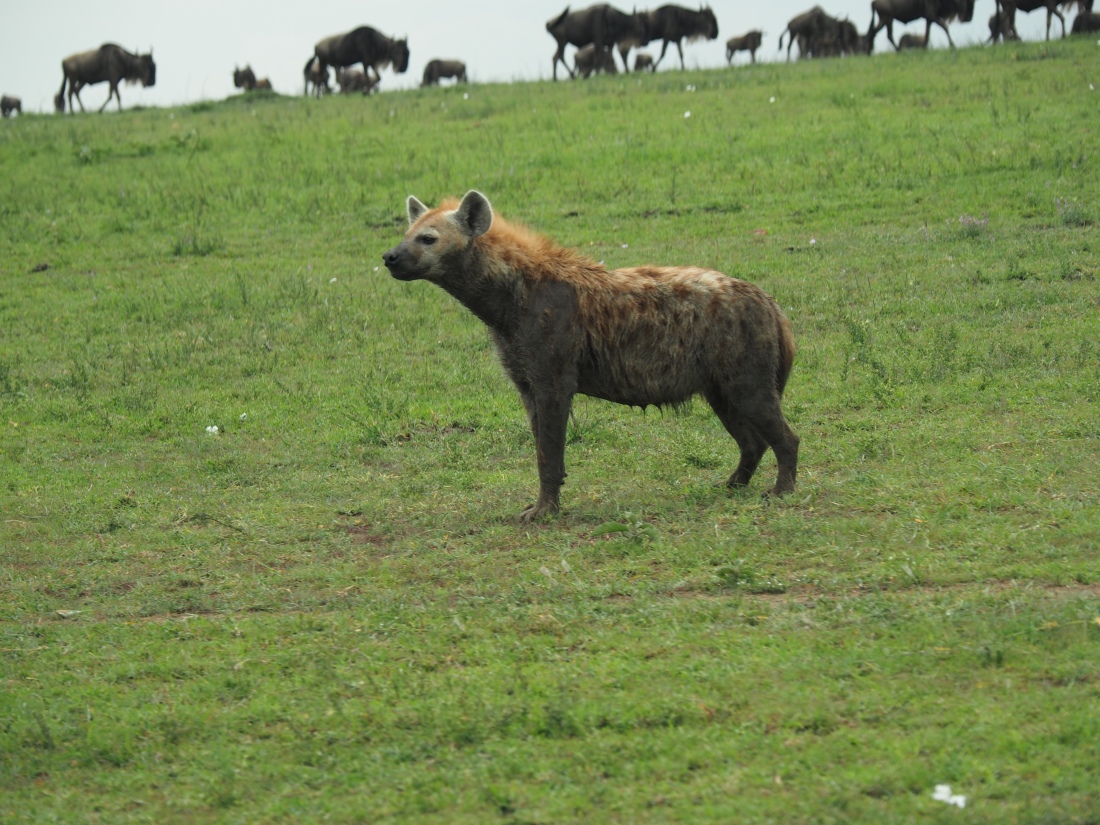 “The Great Migration” is an annual trek from north of the Mara River, crossing the river, and continuing to more grasslands in the Serengeti, in Tanzania. The guide book that I was using said that this happened in July, but animals don’t always read the same books. Evans said that the migration had started early this year, in June, so even though the herds were still large, the numbers were no longer at their peak. Still, there were a lot of animals. These are herds of wildebeest. Zebras make the trek, too, as well as others.

This photo is out of focus. This happens when you take a photo from a moving vehicle, and image stabilization can only do so much – but I included it because these are Eland, the largest member of the antelope family. They are stocky rather than sleek, and look completely unlike my mental image of an antelope. Eland are not very common, and I wasn’t able to get a better photo during our stay in Masai Mara.

At lunch, we stopped at a picnic spot along the Mara River, the river that herds of wildebeest cross during the Great Migration. The first wildebeests to cross are always in the most danger because the crocodiles are hungry. They are Nile crocodiles and they are huge, growing to about twenty-five feet, and they are fast, even on land. But, crocodiles (and alligators) don’t need to eat every day. If they get a large enough meal, they may not eat for months, even a year. That’s a crocodile across the river. We chose to view it from a distance.

The tree in this spot along the river holds the remains of a wildebeest that got caught in the tree during the rush to cross, and never made it, not even into the river. 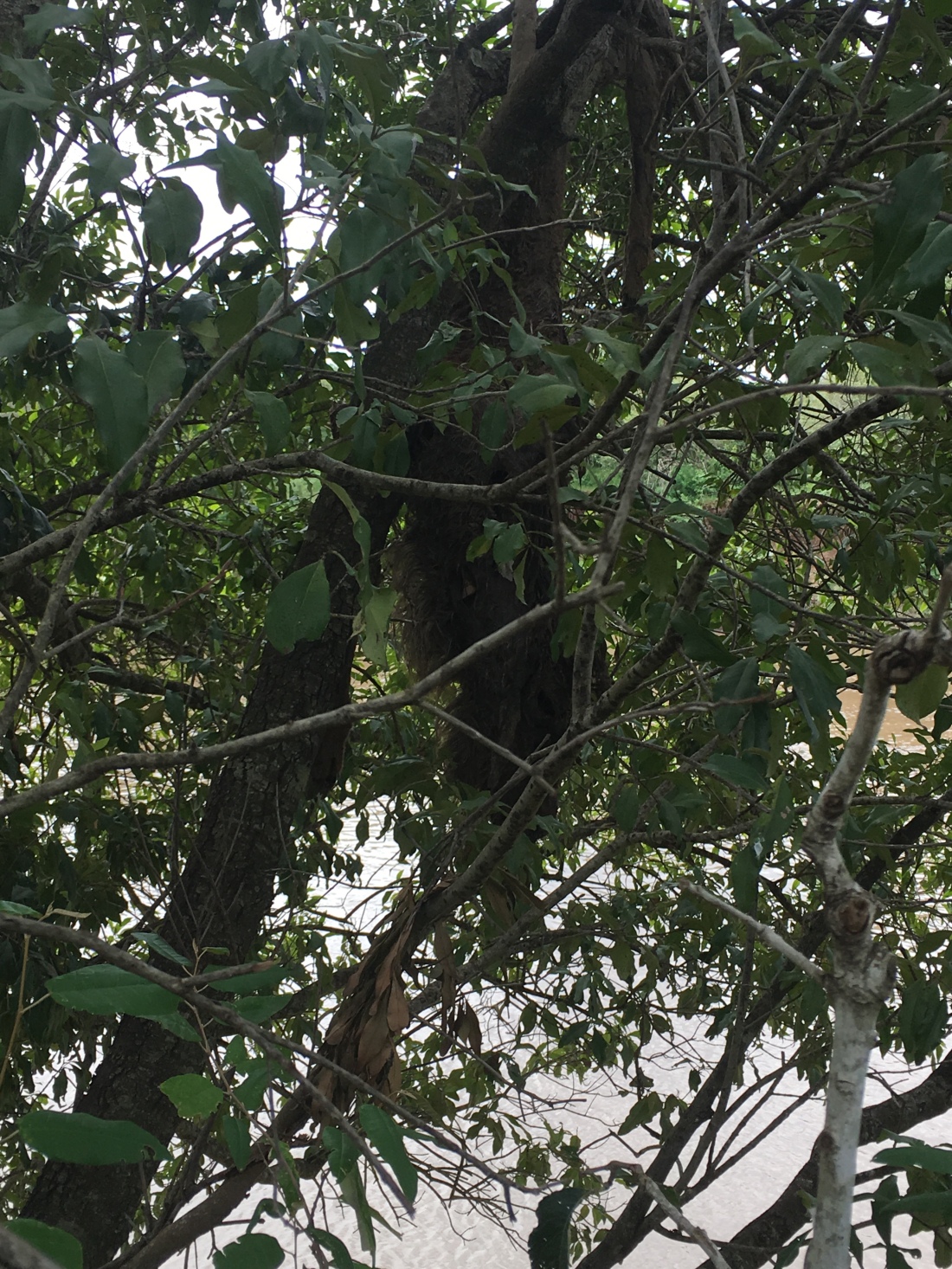 Our group made a stop at this marker, which shows the boundary between Kenya and Tanzania. Tahila wished the Americans a Happy Independence Day! (I’d lost track of the days.) 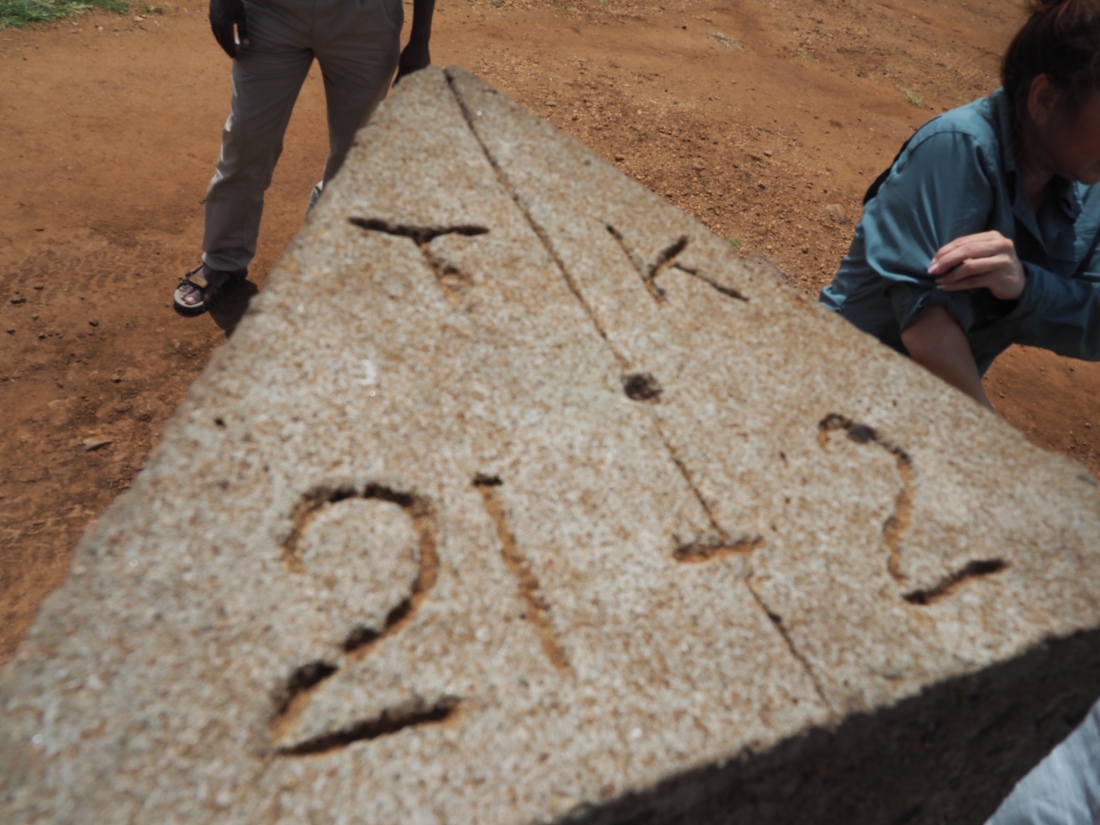 Lionesses, looking a lot like house cats, lying in the afternoon sun. They must have just eaten, because none of them seemed to care about our presence at all, a benefit of being an apex predator. 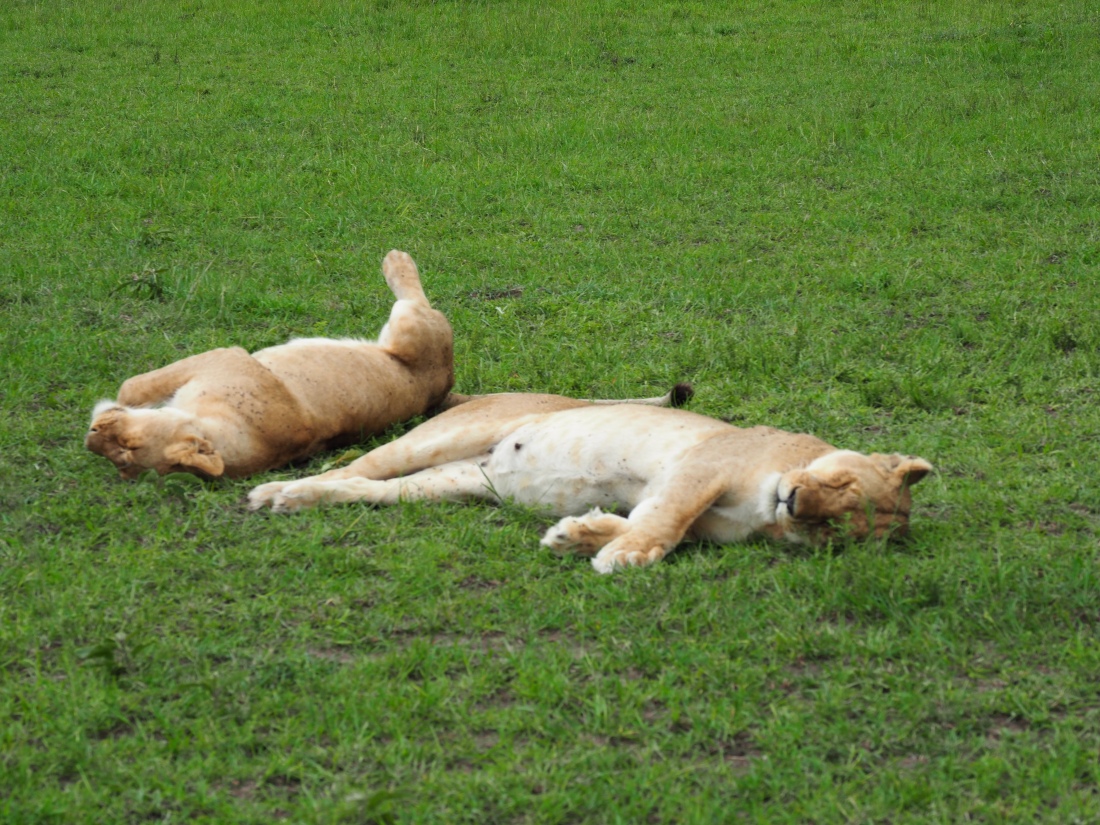 Tahila had asked specifically to find a leopard, and it finally came to pass. Leopards generally hunt at night and frequently sleep during the day, especially if they have a kill stored in their tree. Leopards are the masters of tree-living. They are stunningly fast at climbing trees, they sleep in them, drag their kill up the tree to safely store it, they eat in the tree, and they can literally walk down the trunk of a tree because of the way their knees are constructed. They are amazing animals, and hard to find, but find one, we did, thanks to Evans. 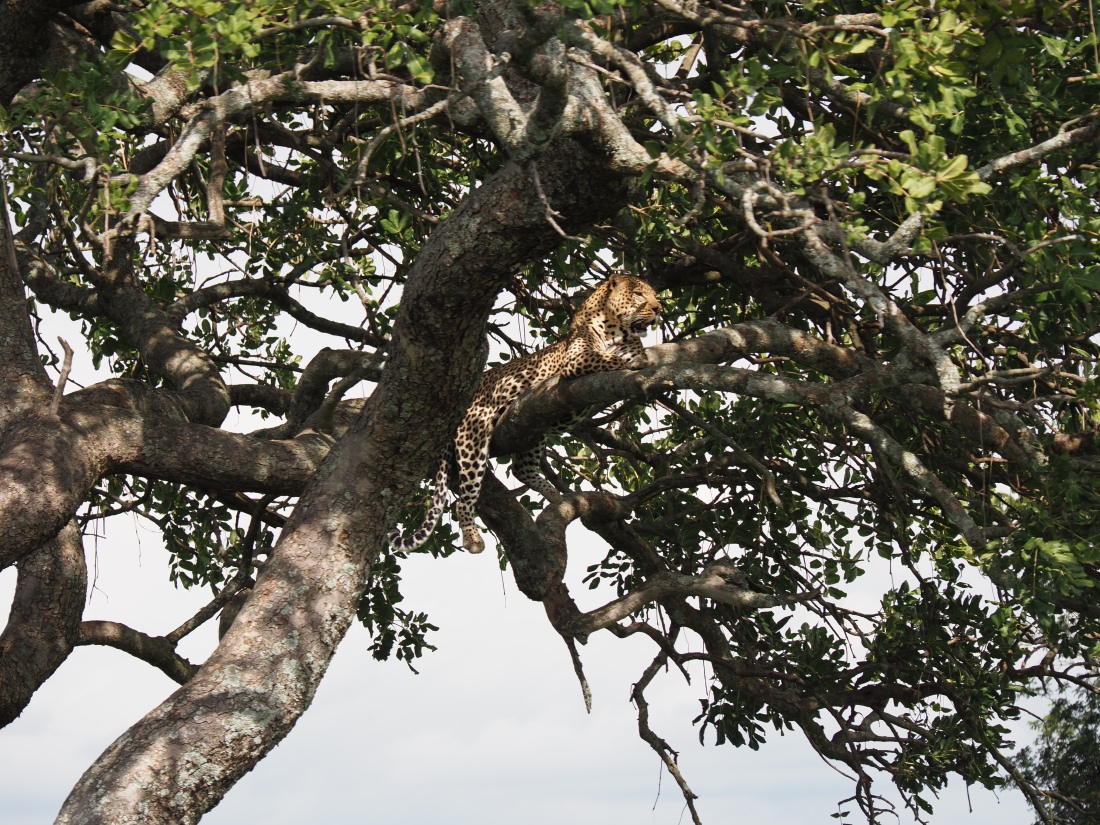 This hillside was covered with Cape buffalo, grazing their way south.

Evans was a wonderful driver, but this time, he chose the wrong spot to turn around. Beneath the tall grass was a giant hole, and the front of the van sank into it. He tried hard to back the van out of the hole, but even with all of us pushing on it, we couldn’t get it back to high ground. It was looking bad. It’s hard to see in the photo, but the front wheels weren’t touching the ground. 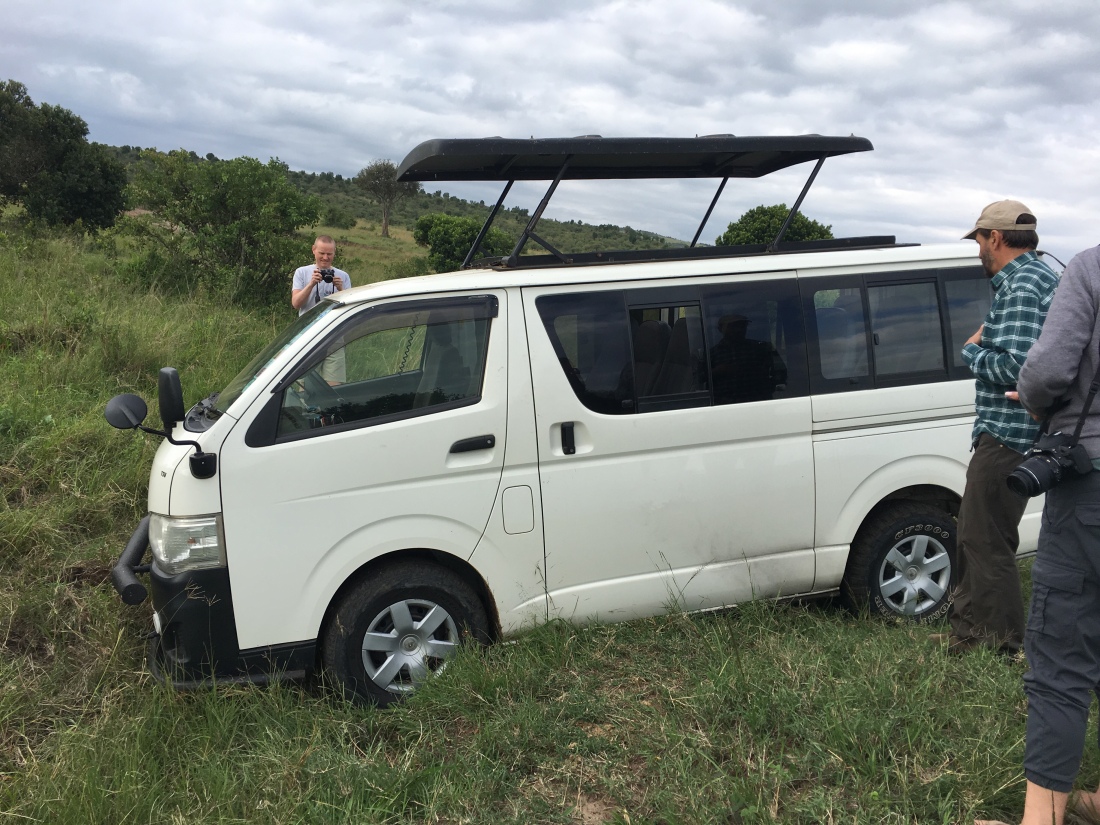 We – the tourists – were losing hope. Visions of tow trucks danced in our heads, but we underestimated the resourcefulness of guides. While we were standing around wondering what would happen, Evans put out a call on the radio. Within minutes, two cars filled with guides/drivers, all of whom were three times the size of any of us, appeared. Evans restarted the engine, they spaced themselves across the front, and they lifted the van back onto the high ground. In about fifteen seconds. 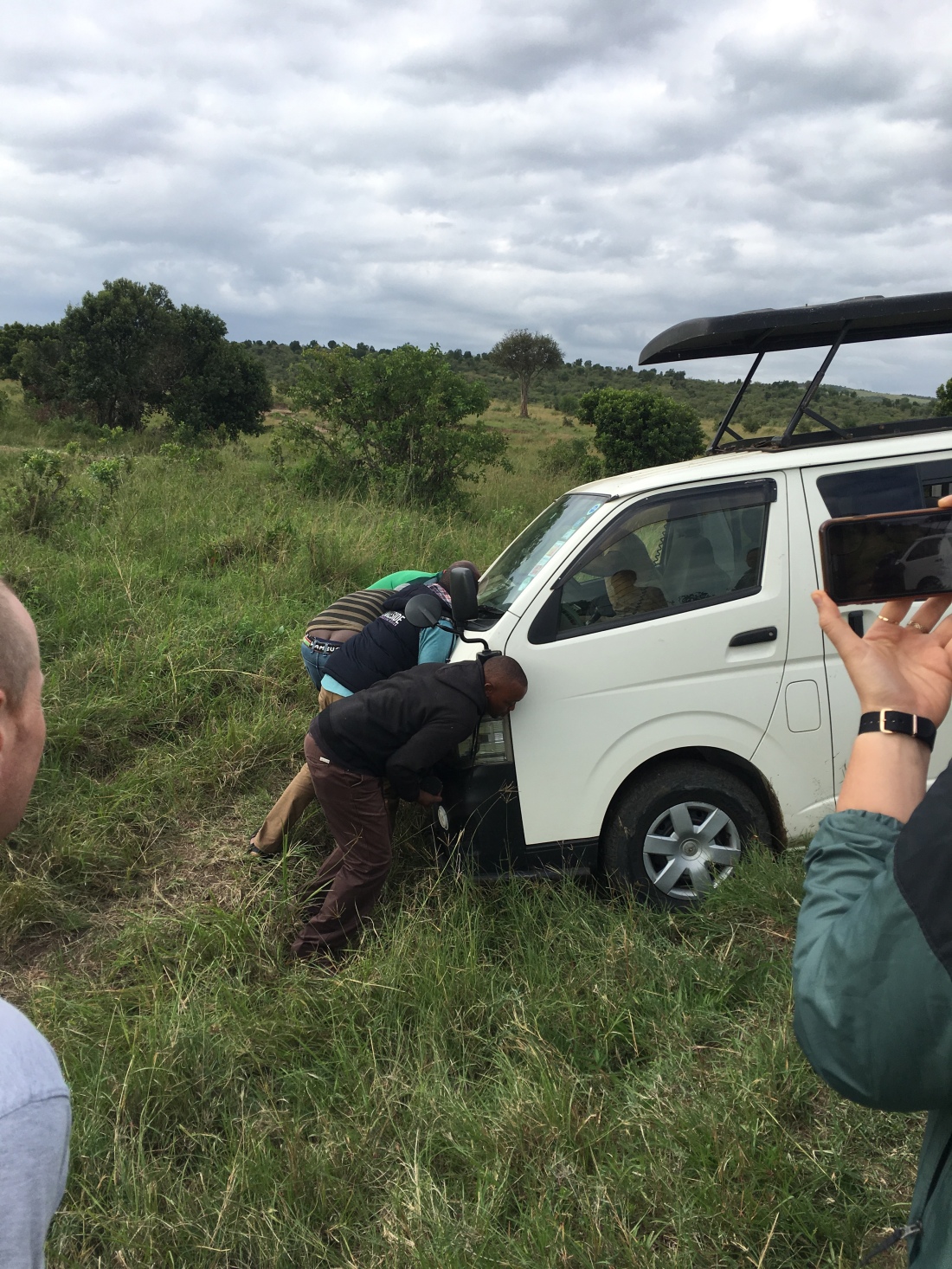 We all thanked them profusely, and of course, Evans did, too, as they departed to return to their various groups.

It was late in the afternoon, and we had started our day very early, so we made our way back to the camp, to rest a while before dinner.