I flew to Nairobi from Bahrain, via Dubai, and arrived at 6:00 a.m., local time. I do not sleep well on overnight flights, so I was groggy when I went through immigration and retrieved my luggage. From the luggage carousel, I stepped through the swinging doors, down the ramp, and straight into the Kenya Tourism desk in the airport lobby.

There I met Edmond and his cohort, Patricia, representing the official Department of Tourism. I asked what they were offering, thinking booklets of “201 Things to Do in Kenya,” or some such thing that I could look at after some sleep at my hotel.

But, conversation ensued. I explained that what I looked forward to most in Kenya was seeing wildlife. Yes, of course, the infamous “Big Five,” but also other African wildlife. Edmond had a friend, everyone in Africa has “a friend,” who was arranging a safari. He might still have room, was I interested?

What is the itinerary? And what is the cost? I wouldn’t commit to anything without that information. Edmond took down my phone number, and promised he would get in touch with his friend and text the information to me.

I went outside to find a shuttle bus to my hotel. I smiled at the woman handing out flyers on the curb, and we struck up a conversation. Yes, I’m a tourist. Yes, I’m from the U.S. Well, wildlife is my main interest. Yvonne had a friend, too, of course, but I said I had already made arrangements. She insisted that I take her phone number, just in case the arrangements didn’t work out.

I never had to follow up with Yvonne because Edmond, true to his word, texted an itinerary to me. It looked reasonable – national parks, transport, guide, group of eight (including me,) room and board – five days. They would pick me up from the hotel (I was staying near the airport) at 6:00 a.m. Tomorrow. Price was good – do they take credit cards? He would get back to me.

By the time the shuttle took me from the airport to the local hotel, Edmond had responded, yes, they will take credit card. Okay, I’m in, I texted, I will see a driver in the morning, 6 a.m.? Yes.

I had about twenty-two hours now to eat, sleep, and prepare for the new adventure, which I did. I left my suitcase at the hotel to await my return, took my re-arranged backpack with me, and headed off with Patrick to join my group.

It took us over an hour through the downtown Nairobi traffic, but I had a good conversation with Patrick. I asked him questions about some of the buildings, and he pointed out the street names – main streets named for the first president of independent Kenya, and another named for his son, who was now president. There was a president in between.

While Patrick was proud of Kenya’s independence, he was discouraged by the corruption in the country’s government. He blamed tribal politics for most of this, and a lack of understanding about how government works.

When we arrived downtown, I was ushered upstairs to a small office. There was a desk and chair, a couple of chairs for visitors, a computer and printer, and a mobile credit card processor. Also, three people, one of whom was in charge, and we took care of payment. I noticed the name at the top of the receipt was not Masai Tours, it was something else, but as long as they delivered on the itinerary, it didn’t really matter to me.

After payment, I was taken down to the van that we would use, and met some of my fellow travelers. I wish now that I had asked any of them how they learned about this safari, but I never found out. My fellow travelers were Tahila from Israel, Aaron and Marianne from Scotland, Sriletka from India, and David, Andrea, and Pericles (yes) from Tucson, Arizona. All of us, thankfully for me, spoke English.

Our guide was Evans Ngiri, a Kenyan native. Over the course of the week, it turned out he was a knowledgeable guide and generally nice person. Evans drove our little group off toward Masai Mara National Park, our first destination, through the city of Nairobi. 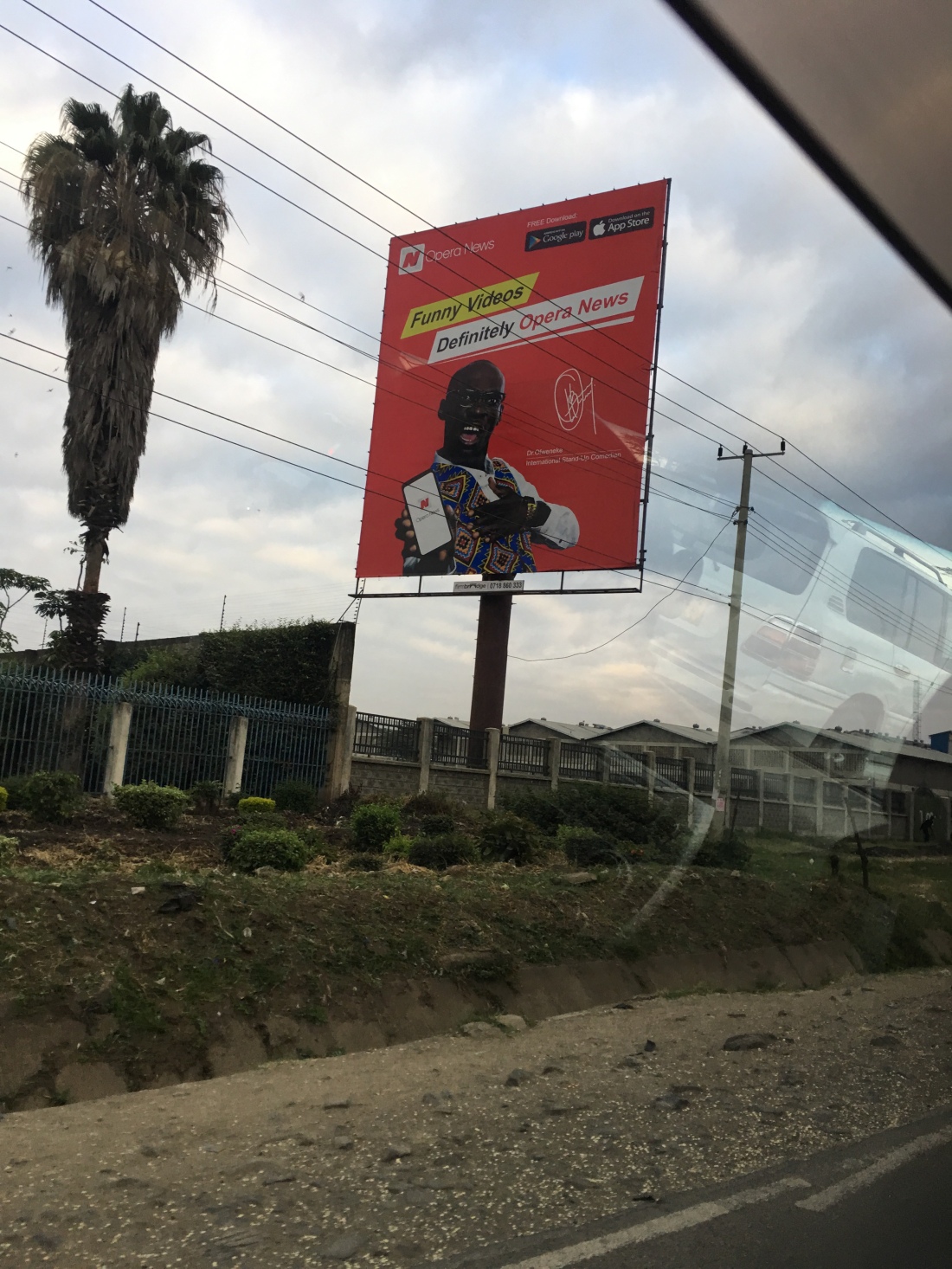 Our first stop was a rest stop along the highway, a scenic outlook occupied by a number of souvenir vendors and a couple of food stands in addition to the restrooms. It overlooked the beginning of the “Rift Valley” in Kenya.

The Rift Valley, a geological formation dating from millions of years ago, is actually a series of interconnected valleys that resulted from the shifting of tectonic plates. They cascade through the African continent from Lebanon to Mozambique. Africa was peeling apart, eons ago. Madagascar, part of Africa at that time, was fully separated and exists today as a separate island.

The Chinese are building roads in Kenya. According to Evans, the not-yet-complete dirt road in the distance was one. As the trip progressed, we would see more.

We reached the Masai Mara in the late afternoon, and everyone was anxious to go on a game drive, to start seeing animals as soon as they could.

Masai Mara is a beautiful park. It is huge and allows freedom of movement for these animals that require space for migration, hunting, and grazing. To the immediate south is Tanzania’s Serengeti National Park, which is several times larger. The two parks create one huge space for the animals who live there, which is wonderful, but even so, it’s not really huge enough.

There are three species of zebra, plains, mountain, and Grevy’s. Grevy’s is distinctly different, with narrow stripes placed close together. I never saw one – they live in the arid part of Kenya, in the north. Mountain zebras live in Namibian uplands and western South Africa, so not in Masai Mara, but plains zebras are the most widespread, encompassing six subspecies altogether.

What color is a zebra’s skin? It turns out that their skin is black all over. (I expected white, because wouldn’t the black skin show through the white hair?) Zebras have specialized skin cells called “melanocytes” that transfer melanin to some hairs, but not others. Melanin turns the hair black, hairs without melanin appear white.

And why stripes? The most common theory, meaning the one in the Encyclopedia Britannica, is that stripes appear to deter horse flies from biting, and therefore helps reduce the transmission of disease. I have also read that the alternating black and white stripes, because black and white absorb heat at different rates, creates its own air current, providing a cooling function. The Britannica did not mention this, I read it somewhere else, and wherever it was, it seems to be a new theory. They also serve a defensive purpose, as zebras defend their young by gathering around them, and the stripes make estimating how many zebras there are more difficult. Predators are put off also by the prospect of nasty kicks from the rear legs, however.

Whatever the origin of the stripes, they are as distinctive for zebras as fingerprints are for humans – each pattern is original, and scientists use them to track individual zebras.

Grazing animals tend to hang around together, and the annual Great Migration is a combination of zebras and wildebeest for the long haul, and others at shorter distances. At other times, zebras and giraffes can be found together. Above, zebras are in the company of impalas. Competition for food is mitigated because zebras’ teeth are suited to the harder grasses that antelope can’t eat.

These are Cape buffalo. They are huge and rarely in danger as adults. Baby buffalo are vulnerable, but well-protected. The danger comes if they become separated from the herd or their mothers. Wild dogs, because of their amazing endurance, are good at cutting out animals from their groups. Buffalo circle up around their young, facing outward. The horns are formidable, can be lethal, even to lions or hyenas. Bulls have larger, longer horns because they also fight each other for the right to mate with the females. One local guide told me that, at guide school, if he was being charged by a buffalo, instructors said he should lie down and let the buffalo run over him, rather than risk being gored and tossed by the horns.

Buffalo are higher-than-impala-on-the-food-chain grazers, but they don’t intermingle much with other grazers, at least that I observed. They tend to keep to themselves. Non-dominant males, like the two above, may wander in pairs or trios, but they don’t become part of a herd until they have displaced a dominant male.

Giraffes are “browsers,” not “grazers,” the difference being that grazers eat things that grow up from the meadow, like grass, and browsers eat leaves, small tree branches, and sometimes small fruits that grow on the trees. Because they do not compete with the grazers, they can often be found with zebras or antelope, although mostly we saw them with zebra.

Giraffes do not like people or vehicles unless specifically acclimated to them (as we will see later.) That’s my observation. Every time we spotted a giraffe, the giraffe would spot us, turn, and walk away. They are just not gregarious animals. They were fine browsing through the small trees while the zebras grazed, but humans were another matter. 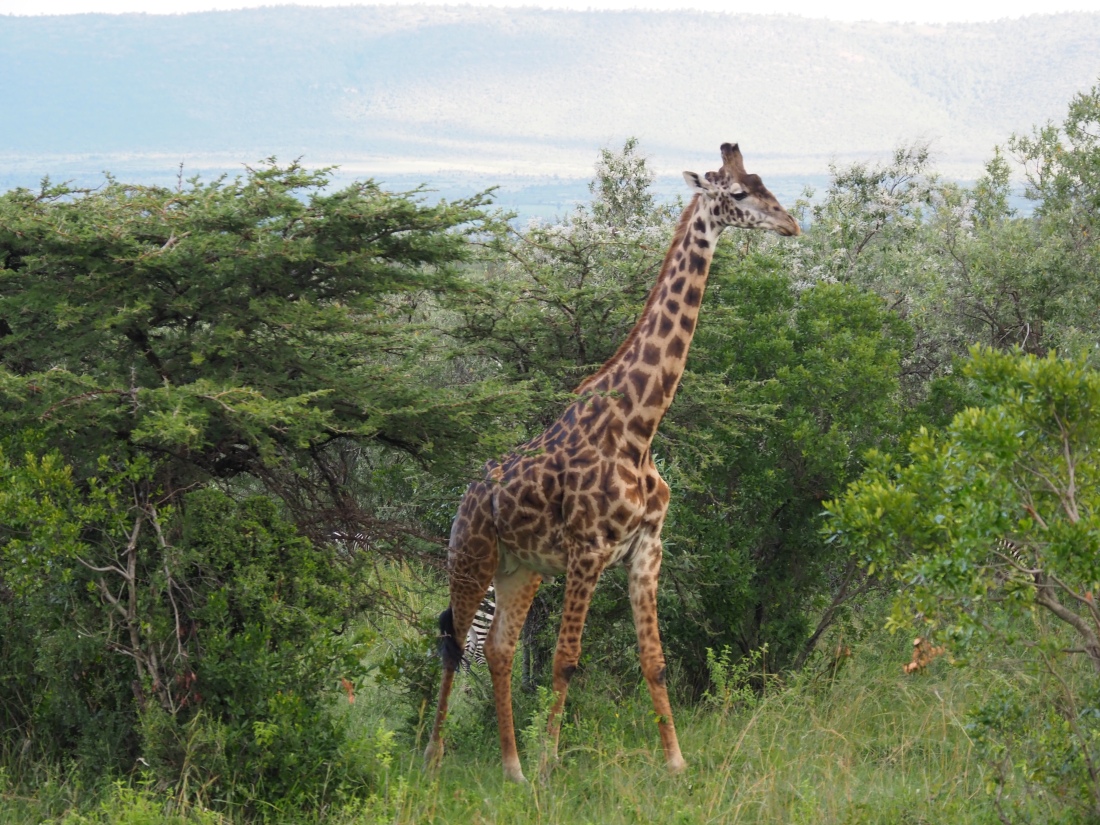 There are three species of giraffe: Masai (above,) Rothschilds (we’ll see later,) and reticulated.

I was as excited as everyone else when we saw the cheetahs! I had seen them in one of the rehabilitation facilities, but not in the wild, until now. Admittedly, they were sleeping, and so not much in the way of action. Still, there they were, in all their spotted glory.

They were brothers, according to Evans, because they were both males and were not fighting over territory, which indicated they were siblings. One of them raised his head long enough to determine that we were not a threat to them or their territory.

It was getting dark, and we were getting hungry, so we headed back for the night to our lodging. The conversation over dinner was all about what we had seen, plus a little “getting to know you.” Traveling within the confines of a van encourages conversation and comraderie, and we turned out to be a very congenial group. It is one of the great pleasures of group travel. I am not opposed to it, even though I travel by myself most of the time. I simply like the freedom of solo travel.