A major attraction anywhere in Africa is wildlife. I love seeing the animals I have only heard about or have seen on television, here in their natural habitat. Zimbabwe has several national parks and also wildlife reserves that make viewing possible for visitors like me. One of these is Hwange National Park, which lies between Victoria Falls and Bulawayo.

I thought it was closer to Bulawayo, based on what I had read in my handy-dandy guidebook, but it turned out I was wrong. I should have hired a driver from Victoria Falls to go to Hwange. I did not because I was so tired of the hard sell of the souvenir vendors and the taxi drivers, and because I thought I could take a bus from Bulawayo. I waited until I was in Bulawayo to investigate the bus.

I was getting ready to leave the Bulawayo Club and move on, so I walked to the bus station on the other side of town to inquire. I find that face to face conversations work better than the telephone for me, especially with the accent and sometimes language barrier. I was directed to the main English-speaker in the bus station, a manager of some sort. I asked about the bus – it stops at Hwange National Park, right? Yes, but not right at the gate. Is it a long way from the gate? It is a short way from the bus stop to the park gate. A short way? Can I walk? Yes. Very good, I will come back tomorrow to take the bus. What time? Should I buy my ticket now? Eight a.m., and no, you can buy the ticket tomorrow.

Back at the hotel, I packed up my bag, a bag constructed to work mainly as a soft-sided suitcase, but with shoulder straps to become a backpack in a pinch. I took care of my bill, and the next morning, I said goodbye to the Bulawayo Club and took a taxi to the bus station. My arrival caused some stares from other passengers because, well, taxi.

I handed my bag to the man loading baggage into the hold of the bus and went inside to buy my ticket. The person I spoke with was not there, but undismayed, I went to the ticket seller. I mentioned my destination and wanted to confirm that the stop was near the park gate.

“Near?… It is about twenty kilometers.”

“Twenty kilometers?” I responded. I was skeptical. He had seemed very comfortable with the idea of me walking the distance.

She turned to others for verification. She used the local language, but it was clear what she was asking. One man came over to tell me in the English he could muster, yes, it is twenty kilometers.

The temperatures in May are quite warm in Zimbabwe, and I would be carrying my bag for twenty kilometers. “I cannot do that,” I said. “It is too far for me, especially in the heat.” She shrugged and handed back my money.

I was annoyed at the situation. I had already made reservations at the park, which I would now lose, and had said my goodbyes. My annoyance gave me the energy to walk the distance back to the Bulawayo Club, carrying my bag on my back.

When I arrived at the Bulawayo Club, Brian and Joseph were surprised to see me, of course. They listened to my tale of frustration, ending with my self-annoyance that I didn’t feel I could walk twenty kilometers carrying my backpack in the hot sun.

Brian was looking at me, with “a look.”

“What are you thinking,” I asked.

Brian continued to look at me. “That is bush country,” he said simply. “There are lions.”

I stayed at the Bulawayo Club for three more days while I decided what to do and where to go. One of the things about traveling the way I am is that in a situation like this, there is no immediate destination to be reached, and my choices are virtually endless, so I take some time when I reach these decision points.

One of the days, I went to the Railroad Museum, which is on the edge of town in the opposite direction than the bus station, the Bulawayo Club being in the center of Bulawayo. I walked, and it was a long way, but nothing like twenty kilometers.

The Railroad Museum is entered through the old railway station in the industrial part of Bulawayo. It was a small but well-preserved building. I bought my ticket in the office that was on the right, opposite the sign that said “Tickets,” and crossed the threshold into the rail yard.

The first item was a freight car used for moving live stock, flanked by a couple of steam engines.

In the largest barn were several cars of different sorts. These were all cars and vehicles from the Rhodesia Railways, and the logo was exactly what I had seen on the overnight train from Victoria Falls to Bulawayo.

Africa has a very strong Christian community, mainly Catholic, so it seemed perfectly logical to have a Railroad Chaplain with his own car, with its own portable organ for music at services along the railroad as it was being built.

The red car was used for maintenance on the cars and engines, while the blue-covered “trolley car” was used for short transportation, such as giving tourists a ride. I had seen a photo of one filled with passengers in the Victoria Falls Hotel. 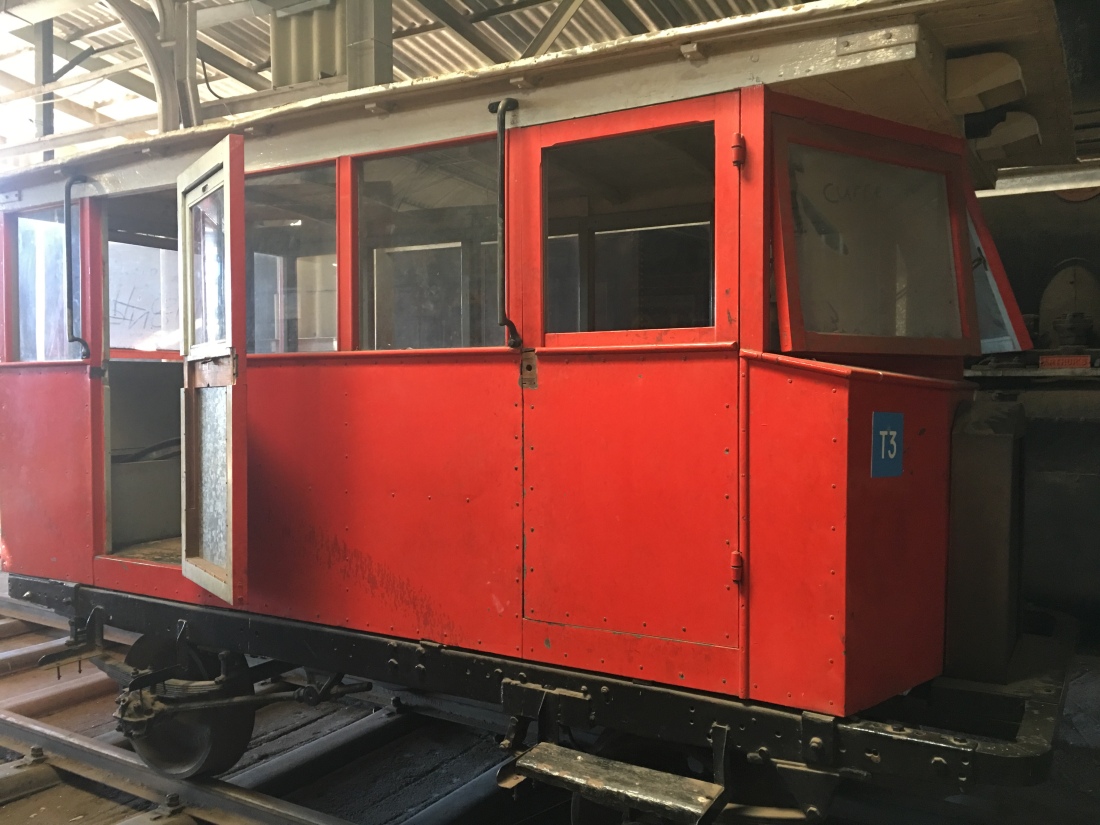 England’s royal family came to visit after WWII: King George VI and Queen Mary, and their two daughters, the Princesses Elizabeth and Margaret.

It must have been a “thing” to preserve the table settings from special occasions. This was the china used by the railroad on the special train for the royal family:

Passengers worried about their luggage in those days, too (although probably not the King and Queen.) 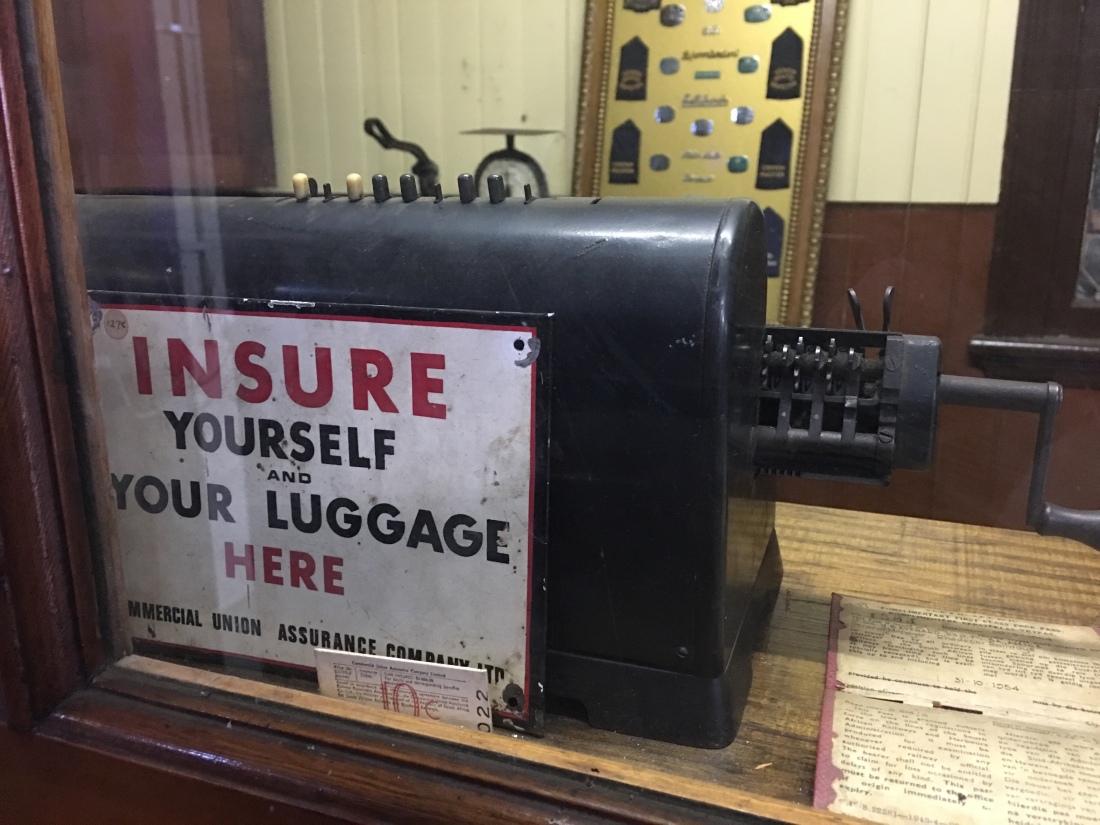 The yard around the railroad barn had a collection of old engines and cars, most in need of a good restoration: 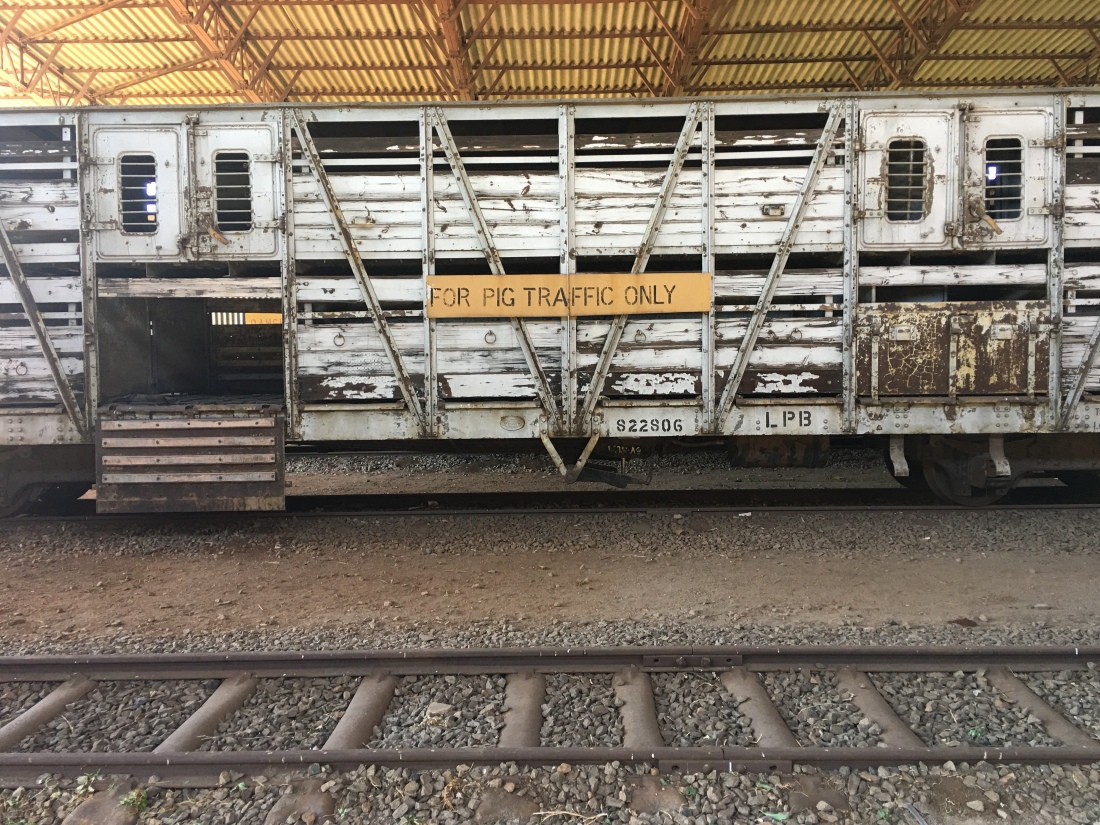 But, once again, the dominant figure in the story of Rhodesia Railways was Cecil John Rhodes. The BSAC (British South Africa Company) and Cecil John Rhodes personally helped to finance the railway development, along with some of his cohorts, and they worked on expanding the railway line through much of Southern Africa.

The railroads were at first enlisted to help remove the mineral ores and other natural resources for sale to other countries, and then to bring passengers. Rhodes’ belief that much of the world should be under British domination meant that encouraging settlers, especially British settlers, was a good thing. Although the slogan, “Cape to Cairo” was associated with the railroad, it was a newspaper writer and not Cecil Rhodes who originated it. 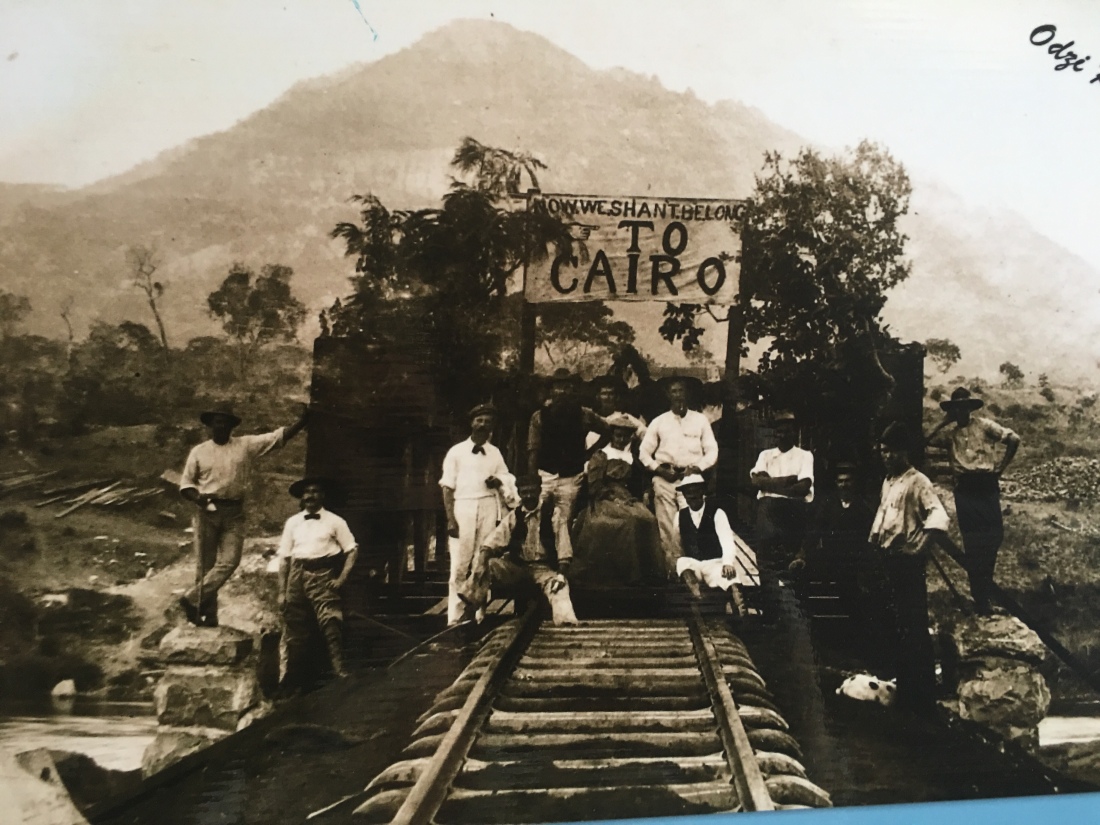 The building of the railroad met with many obstacles, such as routing and supplying materials, but the biggest obstacles were the constant battle with malaria infecting the workers and, lions. Lions attacked the workers and hunters were brought in to kill them and preserve the work force, which made headlines, of course. But at the end of two years of construction, the real killer was malaria – the project overseer estimated that they lost about 60% of the work force to malaria.

Cecil John Rhodes had his own train cars, the epitome of luxury at the time – a lot of wood, leathered and cushioned seats, a private bathroom, a kitchen, dining room, and bedroom. 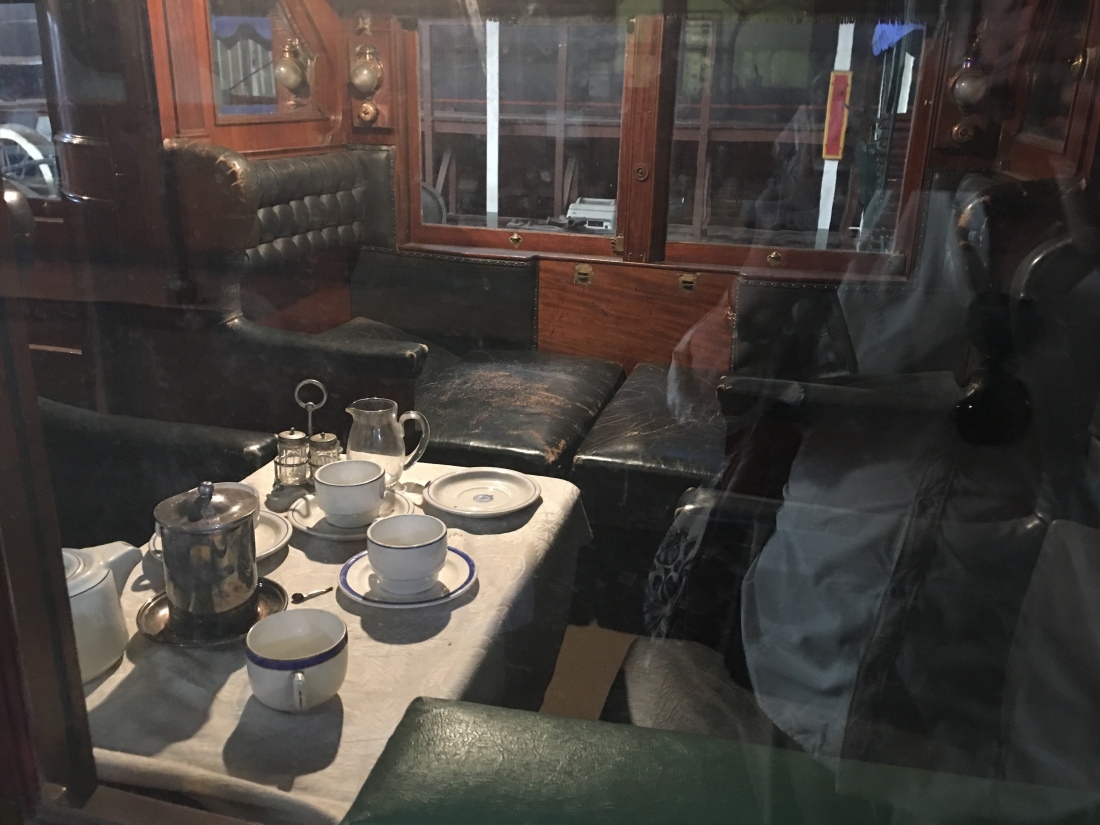 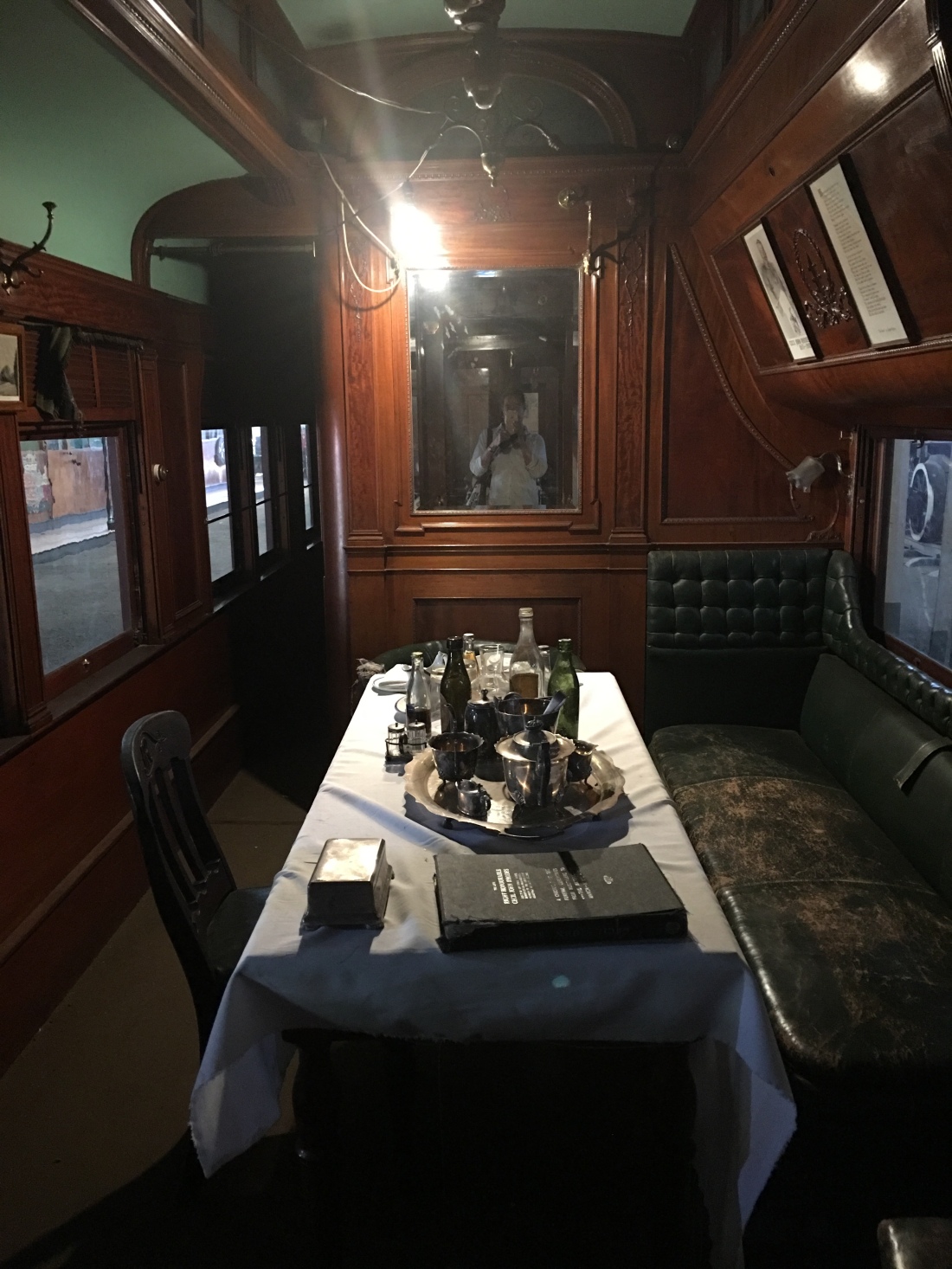 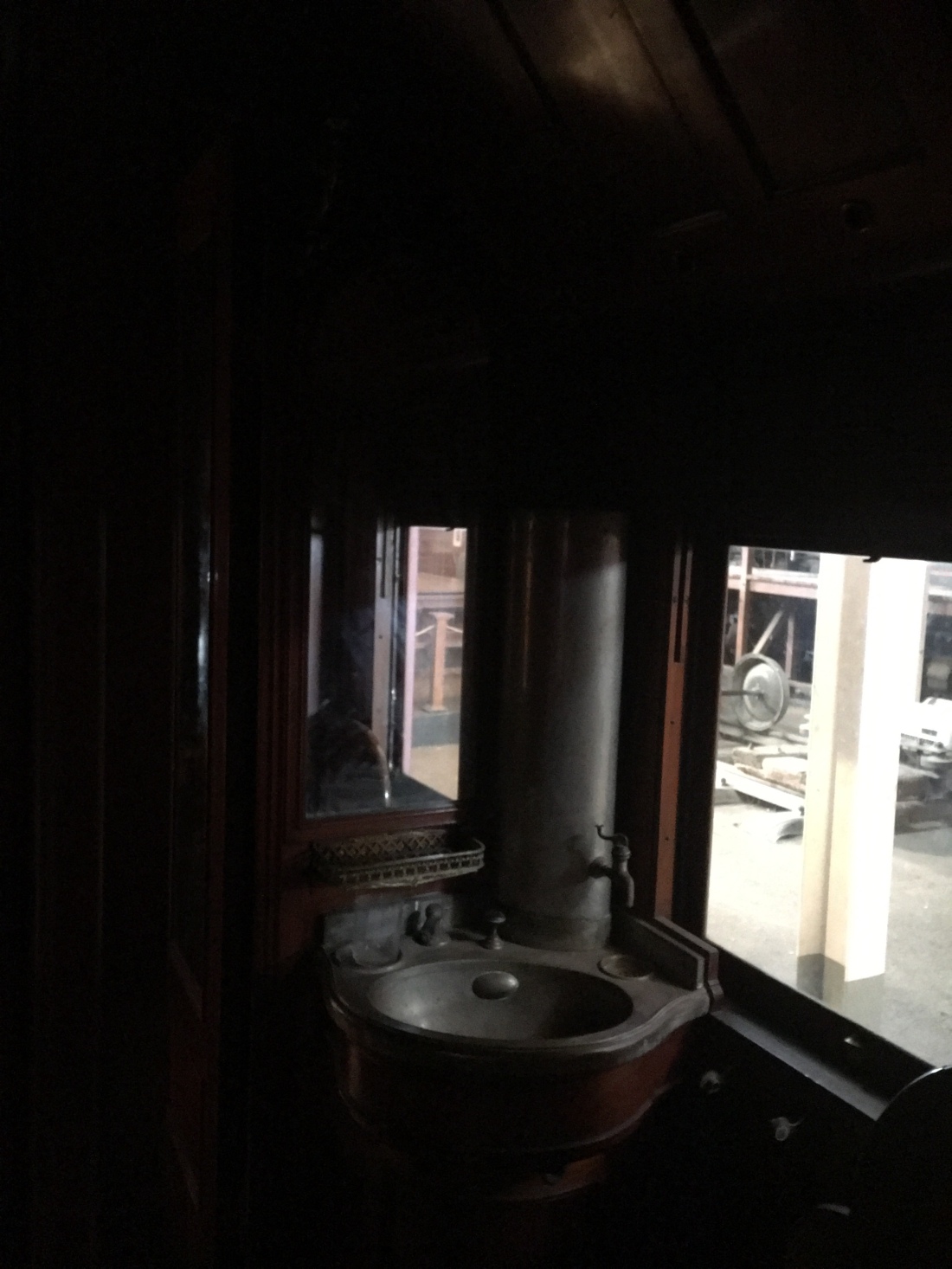 This train was used during Cecil John Rhodes’ funeral, when his coffin, which required a cannon wagon to move, traveled around Rhodesia and South Africa, in a manner directed by Rhodes in his will. Whatever one thinks of him, the man left a permanent imprint on the history of Southern Africa.

Parts of the railroad exist today, but the English tracks are being replaced in some parts with much more modern construction. Some of the old routes are being promoted again, with luxury accommodation in the old style – it’s definitely a luxury expenditure, but it comes with the promise of elegance and old style adapted to modern preferences.