I was greeted at the train station by Blessing Thlakanelo, a local tour guide, and his assistant, Shepherd. Blessing had been arranged through the brother (a tour guide in South Africa) of my taxi driver in Victoria Falls. My driver’s name was Clever, and the name fit. Clever had told me that someone would meet me at the train, and these two clean-cut young men, dressed as safari guides, were holding a placard with my name on it. 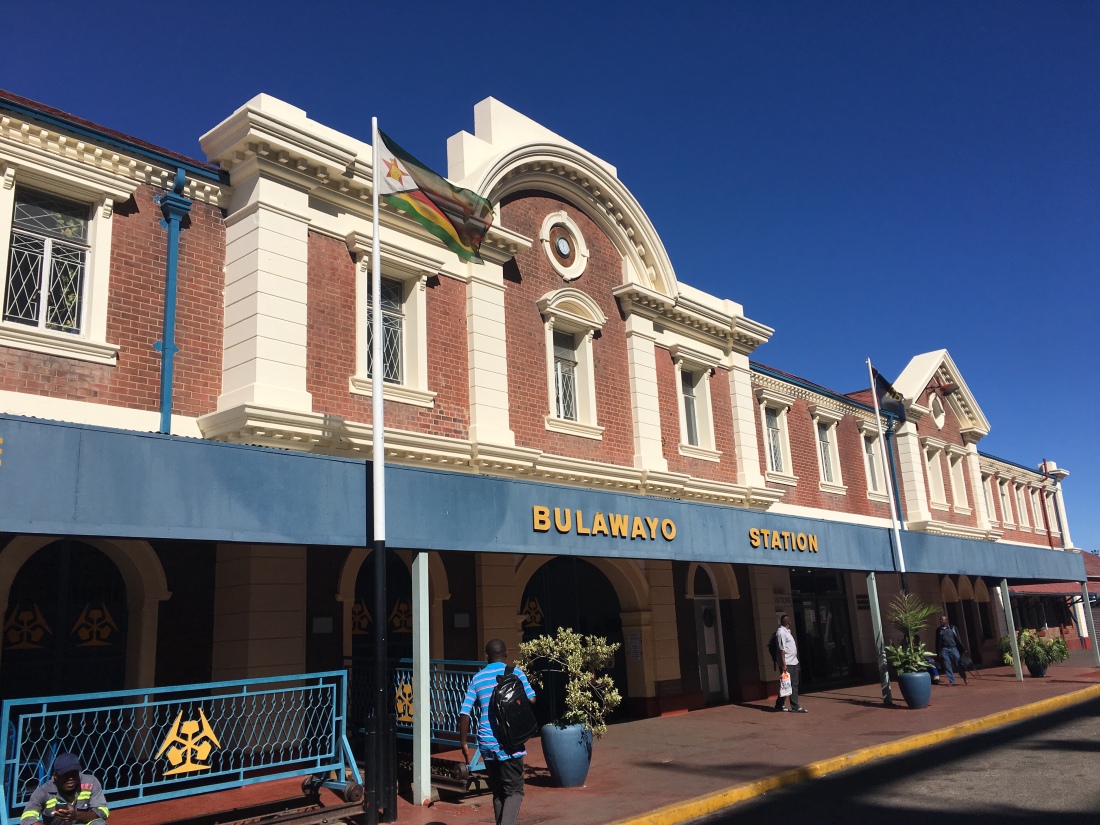 Blessing asked if I would like to go to my hotel first, or to visit a rhinoceros reserve first. Blessing was a guide for an agency for several years who decided to begin his own agency with Shepherd as his assistant. Shepherd is a student at a local university, studying business administration, and a very bright, serious young man.

I had spent the night on the train from Victoria Falls, a fourteen hour journey in a sleeper car that had seen better days a long time ago – no porters, no bed linens, just a couple of berths in a tiny compartment with my sleeping bag. I wanted a hotel room first.

Shepherd drove while Blessing talked, telling me about the rhinoceros reserve and, of course, other places he could take me while I was in the area. In about fifteen minutes, we arrived at the Bulawayo Club Hotel.

The Bulawayo Club is a lovely building with a small garden around it, bounded by an imposing front gate and surrounding fence. It was built originally to serve as a men’s club in the British tradition, and the club still exists, but the membership is smaller now and the building is older, and they take in “boarders” to help their budget.

I felt at home instantly. The front desk staff were friendly, as most people are in Africa, and the whole demeanor of the building – old, dark wood, dark, elegant furniture worn into comfort, daylight pouring into the central courtyard visible through the public sitting area – felt very familiar. (You can see the light in the window to the left.) A staircase in the grand old tradition – wide, carpeted, and open to the ceiling that capped the three-story building sits at the back of this photo. To the left and behind me, a lovely fireplace with a seating area.

Brian, the manager, and Joseph, front desk, checked me in. Joseph escorted me to the small, ancient elevator, which had a stationary door with a door knob and a lift door that was a folding cage door in the old style. (You can see it, folded up, on the right.) I looked at the control panel. It is now electric, but still had the hardware of the old circular operating switch.

In spite of its age, it was reliable, and it lifted us to the third floor. Joseph opened the doors, and we stepped out onto the landing, an area large enough to serve as a sitting room, quite open and airy. It had its own comfortable seating area in case you had to wait for your friend before you both headed downstairs to cocktails.

Joseph led me down the hardwood floored hallway, past a smoking lounge, and around a corner to the section of hall away from the street. The three floors were arranged in a square around a central courtyard, as below. Rooms had been built on both sides of the hallway on the third floor, for about half of the hallway’s perimeter. The other half was a walkway open to the courtyard. There were walkways on the first and second floor that ran around the perimeter.

My room was plain, but very comfortable, with a large bath. 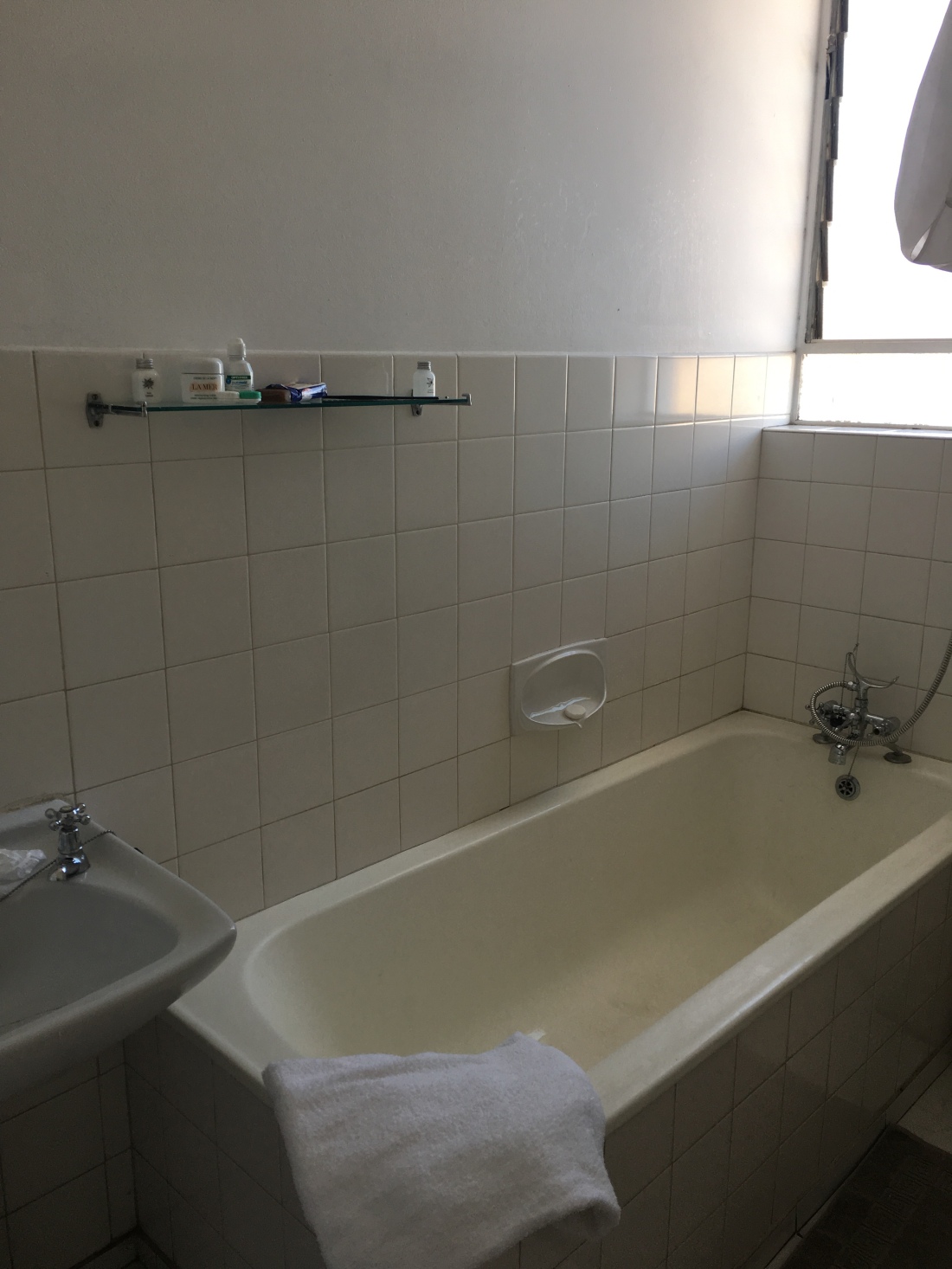 When I came downstairs an hour later, Shepherd was waiting for me, Blessing returned in a few minutes, and off we went to the rhinoceros reserve a few kilometers away.

Zimbabwe was called “Rhodesia” when it was a British colony. Bulawayo, which had been the center of power in pre-colonial times, was demoted and the capital established in Fort Salisbury, which became the colonial capital city of Salisbury, and then, after independence, Harare. Towering over the European-dominated history of Zimbabwe was Cecil John Rhodes.

Zimbabweans, I think, have mixed feelings about Cecil John Rhodes. Rhodes was born and schooled in England, but came to Africa after university for health reasons. Luckily for him, he fell in love with Africa, and was a life-long cheerleader for development, having a grand vision of a railway connecting Cape Town, then part of colonial Southern Africa, and Cairo, Egypt. “Cape Town to Cairo!” He was also a strident believer in the virtues of British imperialism, and believed that the white races rightfully ruled over others.

Cecil John Rhodes obtained personal control of an incredible amount of land, helped establish DeBeers Diamond Company and the Rhodesian Railroad, among other ventures, and became hugely wealthy. His beliefs about races softened over time, and when he died, Rhodes left huge amounts of land to be used as parks and reserves, and money to build schools and fund the education of indigenous people, including, it turns out, Blessing and Shepherd. Many Zimbabweans attended those schools and enjoy the parks. “Rhodes Scholars” are also beneficiaries of his legacy, and the scholars are nominated from a number of countries, including Zimbabwe, Zambia, and South Africa. Like I said, mixed feelings.

Our destination, the rhino reserve, was part of Mtobo National Park, created from land left to Rhodesia, now Zimbabwe, by Cecil John Rhodes. These now-public lands provide an environment for breeding and occasional health care, protected from the poachers who have decimated rhinoceros numbers. In 1999, Zimbabwe had 2,200 rhinoceros, but now the number is closer to 800. These rhinos had their horns cut off to diminish their value to poachers. They would be re-introduced into wild parks eventually, and their horns, made of keratin like our hair and fingernails, would grow back.

We were required to stop at the ranger station at the entrance, and to be accompanied by two armed rangers, who also served as trackers. These rangers are authorized to shoot poachers first and ask questions later. And make no mistake, poachers are serious threats to humans as well as animals.

Being accompanied assured that, importantly, we would not be mistaken for poachers, and that there would be expert help in finding the rhinoceroses, who could be anywhere on the vast acreage that made up the reserve. They were very nice guys. 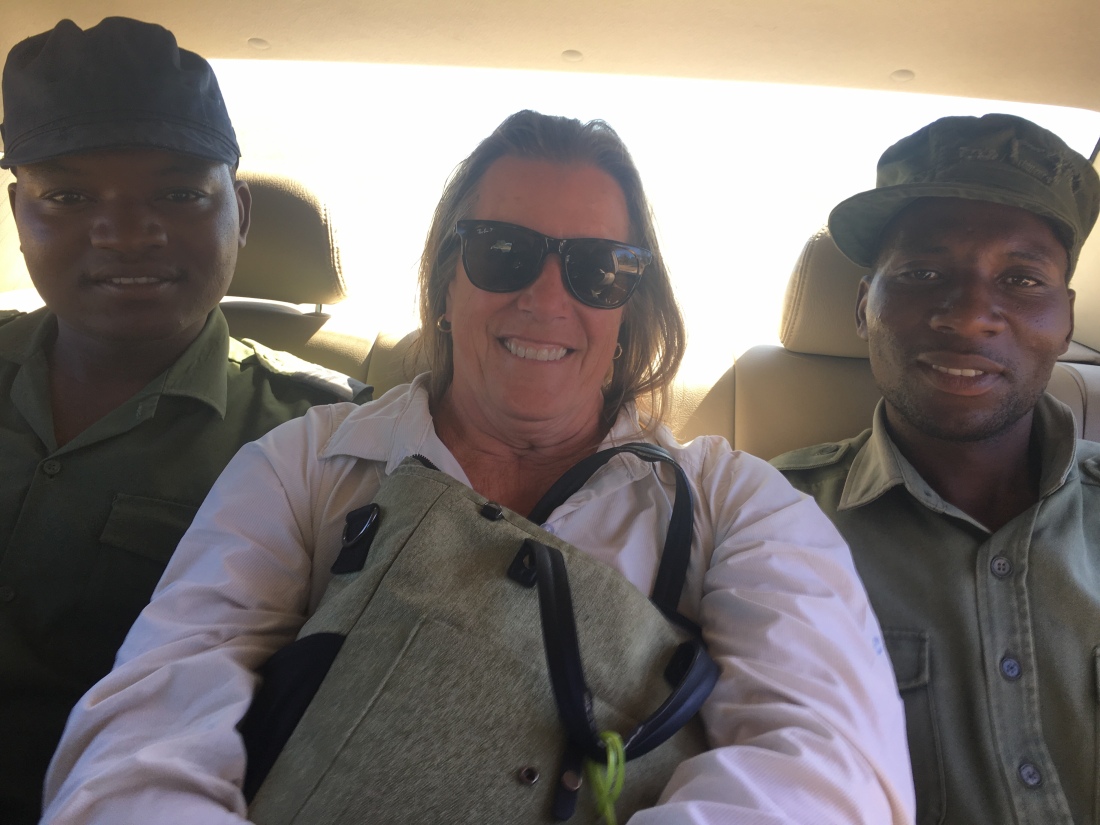 In a short while, we stopped where the rangers suggested. Blessing had thoughtfully provided some lunch for me, and I enjoyed in the shade while they tracked the rhinos, which they believed were nearby.

I had dressed entirely in khaki and beige clothing, the better to blend into the brush and avoid alerting animals. Additionally, we were located downwind from where the rangers anticipated finding the family currently in residence. Rhinos have very poor eyesight, but excellent sense of smell.

Animals take cues from each other when it comes to monitoring their environment, and there was a small crisis caused by a wildebeest. The wildebeest was resting nearby the rhino family. It spotted our group and stood up, ready to run if necessary. This, in turn, alerted the rhino family, who began to move around, trying to identify what had disturbed the wildebeest. 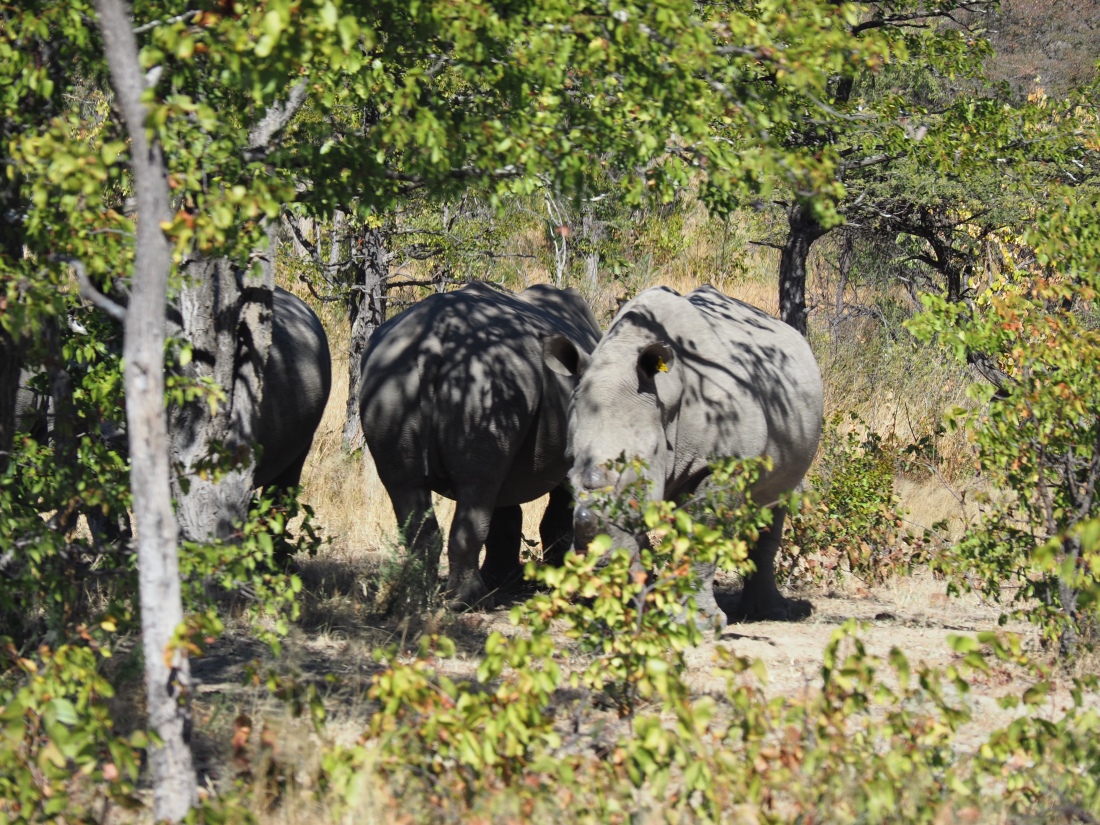 We crouched, trying to look as unthreatening as possible to the wildebeest. We were successful, and the wildebeest casually wandered off, grabbing some grass as it went, now clearly unconcerned. The wildebeest’s lack of concern comforted the rhinos, who now circled up and began to lay down.

Rhinos, when they sleep, arrange themselves with their backs to each other and face outward, the better to spring into action with their horns facing forward if disturbed by a possible predator. Predators, such as lions, don’t generally go after adult rhinoceros. Lions are put off by the horns, and rhinoceros skin is difficult to pierce, even for a lion. But, in Africa, the defensive instinct is strong. One rhino stood longer, apparently wanting to survey the area more closely as the others settled into sleeping positions. 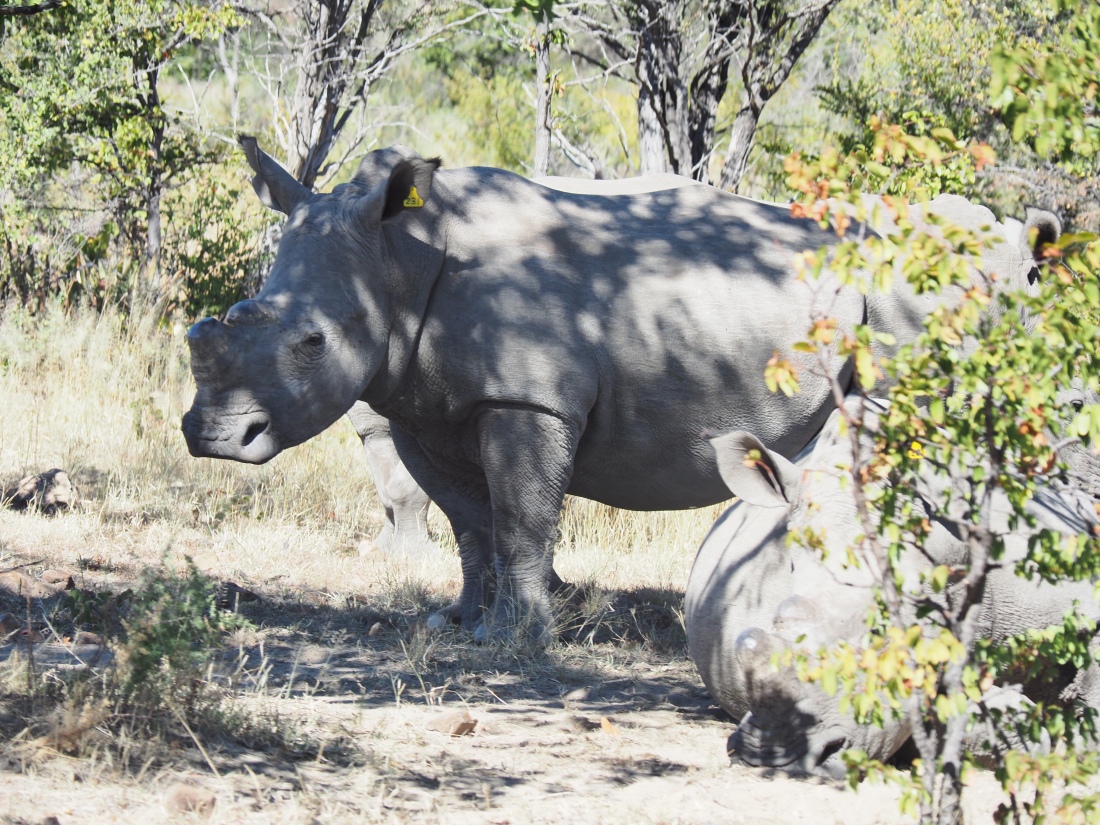 Finally, even the last rhino settled down, and Blessing indicated that I should follow him, which I did, crouching as we moved closer to the rhinos. I noted that there was a tree between us and the rhinos in case they charged, something to take cover behind, because rhinos are surprisingly fast for an animal that seems supremely un-streamlined.

We crouched, then stood, watching the rhino family as they shifted in their sleep. I kept alert, but the rhinos did not seem to be aware of our presence so close to them. It was exciting.

After our time with the rhinos (rangers allow plenty of time, but not forever,) we headed back toward Bulawayo. We passed a school that was built by Cecil John Rhodes’ largesse, and Blessing identified it as a school that he and Shepherd had attended.

I was tired, but very gratified by the visit with the rhinos, and we arranged to meet again in the morning for another day tour, this time to the scene of prehistoric paintings and the “World View.”

3 thoughts on “The Bulawayo Club and Rhinos”