Our night in the bush camp was over. We broke camp, loaded up the mokoro, and headed to our next camp. Surrounded, as we were, by the Delta and all the wildlife in it, just poling from one place to the next was an opportunity to see new animals and birds. We were not disappointed.

Elephants are always impressive, still, sometimes it was just as exciting to see smaller creatures or birds or plants. I asked Moss about the water lilies, and learned that there are two kinds of water lilies growing in the Delta, which the locals refer to simply as “day lilies” and “night lilies,” based on the time of day that they bloom. I noticed that two types of lilies were blooming at the same time, so I asked him what the difference is between them.

“One blooms during the day, and one blooms at night,” he said. It was a language fail on my part, I realized.

“But here are both, blooming,” I said, taking advantage of the two flowers conveniently side by side. “Which is day?”

This time, I had asked the right question. “Day lilies have smooth leaves. Night lilies have rough leaves,” he said, using his finger to describe the scalloped edge of the leaves. These are day lilies:

And, night lilies: (Notice the serrated edges of their leaves.)

And the birds. There are a lot of birds here because their food is plentiful and there are many places to rest and hide from predators.

The most beautiful bird (my opinion) is the African Kingfisher. Here, he had just caught a minnow: 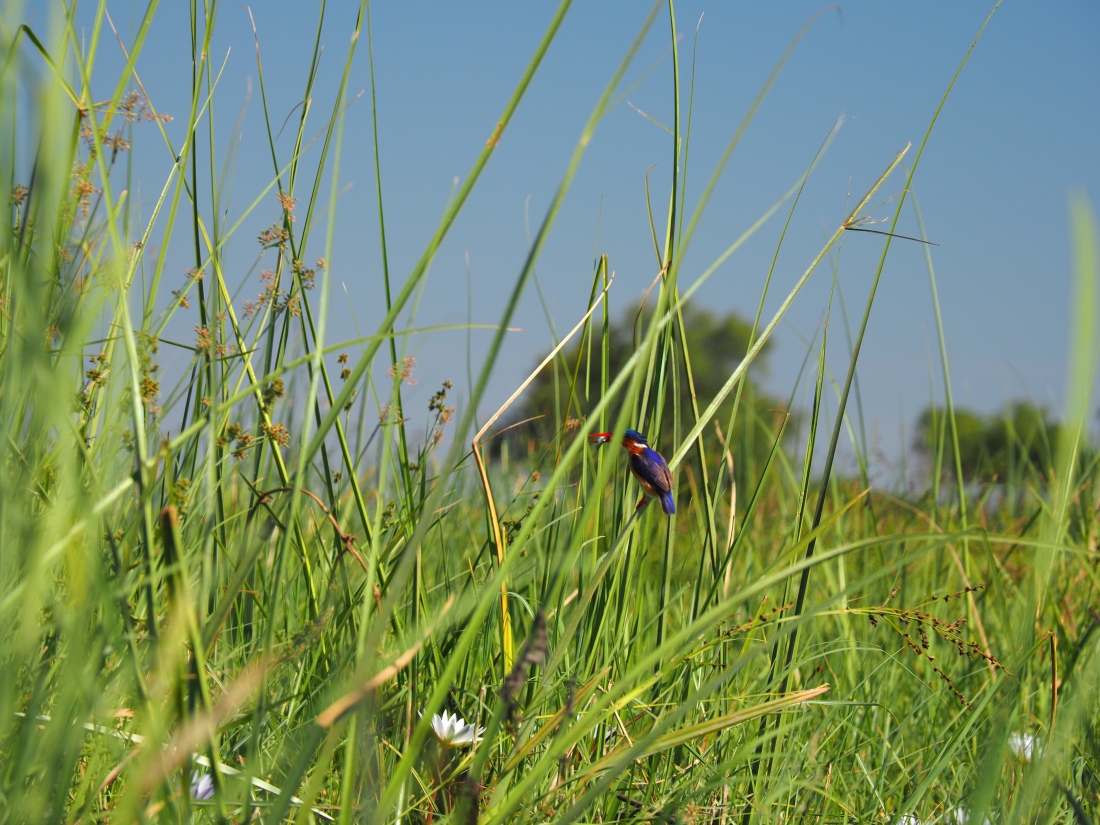 Above is an unobstructed view of him by another member of the group. A poler spotted this little frog: 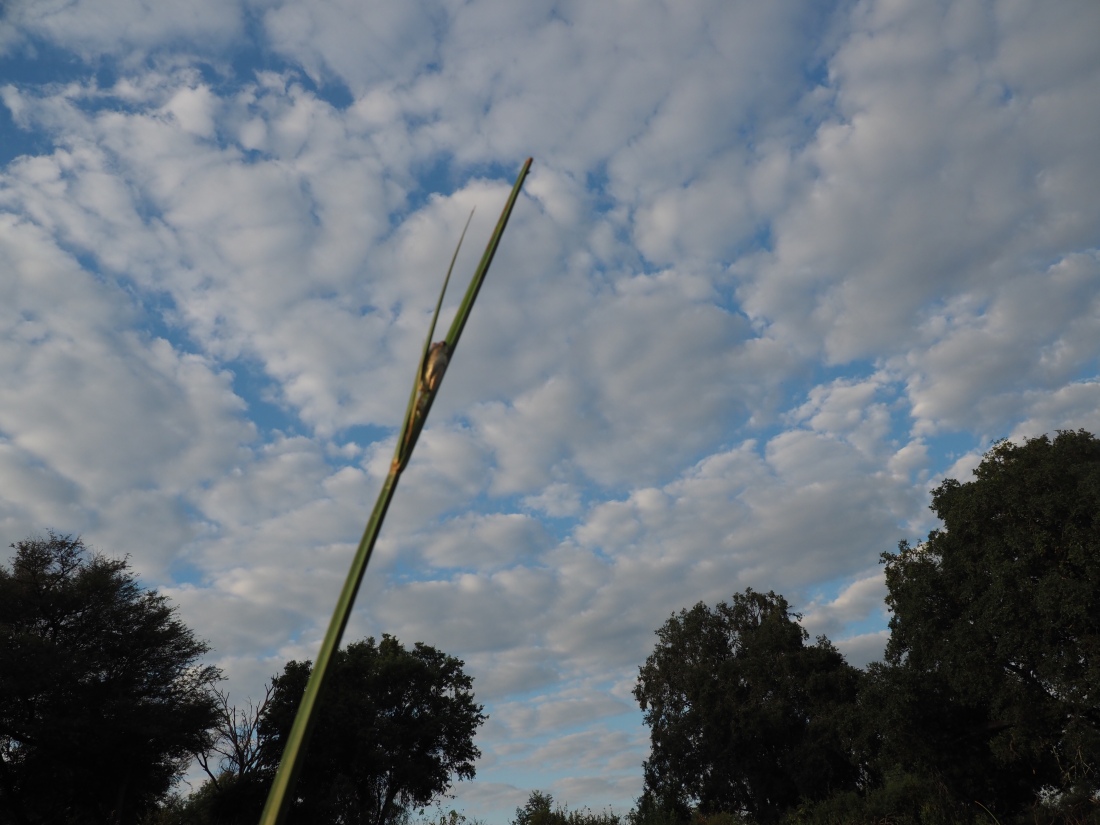 And this was the African Fish Eagle, which we saw frequently:

Gliding along in a mokoro is an invitation to relax and see how beautiful the world is. 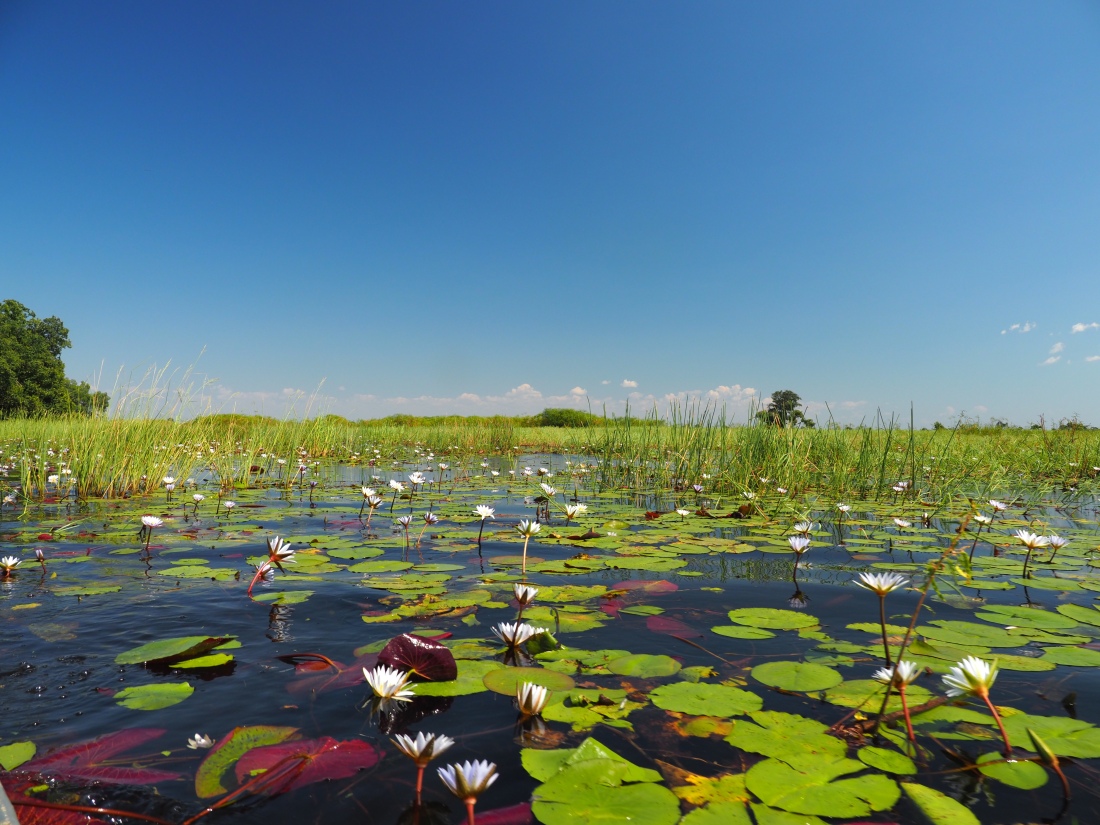 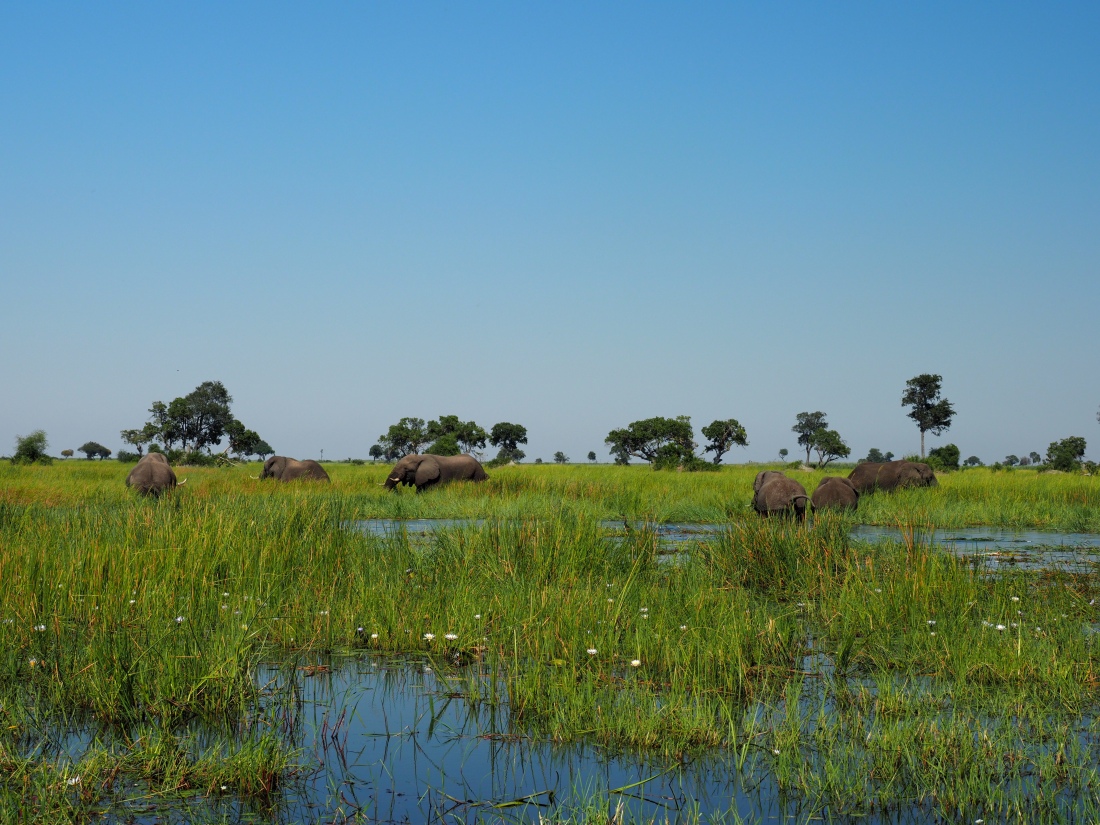 It is fun to rough it, but it’s nice to return to indoor plumbing. In this case, the “indoor plumbing” was outdoors, fenced off for privacy, but open to the sky. It was really very pleasant – there is nothing like fresh air and sunshine to make a shower feel especially good.

We were at a Delta camp called “Umvuvu.” It was a tented camp, meaning the tents were already up and had beds ready for us. There were a number of paths leading to the toilets/showers/hand laundry areas, and to the kitchen/dining/bar area. We had some unscheduled time until the nature walk, and it was nice to relax, looking out over the lagoon, cold drink in hand, watching the world, and listening to the banter at the card table. About six of our group had learned canasta and were having a fun time playing and kibitzing.

The nature walk came later, and it was interesting. Moss is good at recognizing animal tracks, animal remains, and the trees that grow around here.

A “sausage” from the “sausage tree,” which is popular with monkeys and baboons, but painful if it falls on your head! Apparently, this didn’t happen all the time because we – including Moss – were standing under the tree.

A young bull peacefully munching grass. The bird eats skin parasites for him. Further on, Moss was showing us fresh signs that an elephant had come through the area, when the elephant re-appeared…. We pretended there was nothing to see here, and moved along quietly.

Hippos come out of the water at night to feed on grass around the lagoon. We didn’t hear them (if they were there) during our bush camp, but we definitely heard them here at night. I could hear the distinctive grunting uphill from us, so I was certain they’d come by the tent. I did not, however, go charging out with my camera to photograph them. Setting off a flash didn’t seem like a good idea.

The next morning, we again loaded up the mokoro, and headed back to where we left the bus on Gao Island. 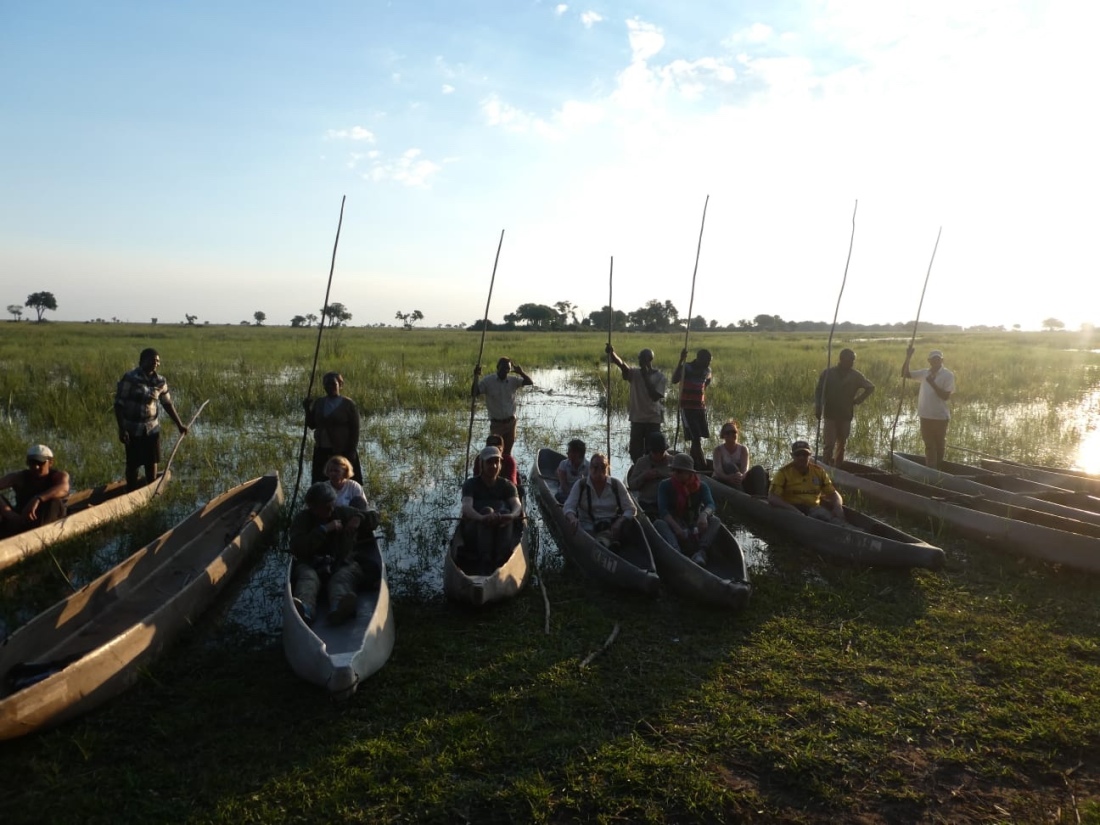 Above is Henry, our safari cook. John, our driver, had stayed with the bus on Gao Island, and greeted us when we returned. The polers helped us move everything back to the bus, and we said farewell to Moss and his team. We then climbed onto the bus and headed out for our next destination, the Rainbow River Camp near Bagani, back in the Caprivi Strip, Namibia.

This meant crossing at the ferry again. The locals on this side were more enterprising (or maybe our timing was better,) because there were a number of food stands around the ferry landing.

And a herd of cows, grazing. They were not going on the ferry, at least, not this time.

The ferry routine is so familiar: loading the vehicles, the passengers boarding, the late arrivals, waiting for the next one…. 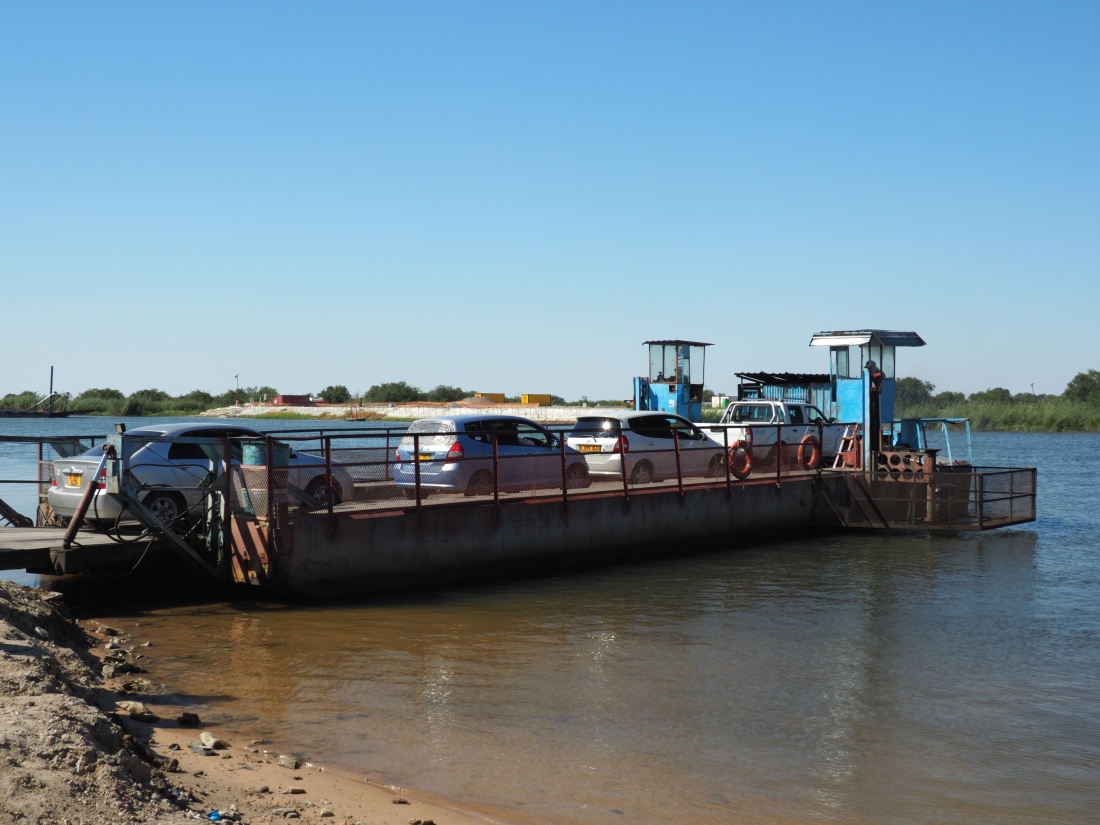 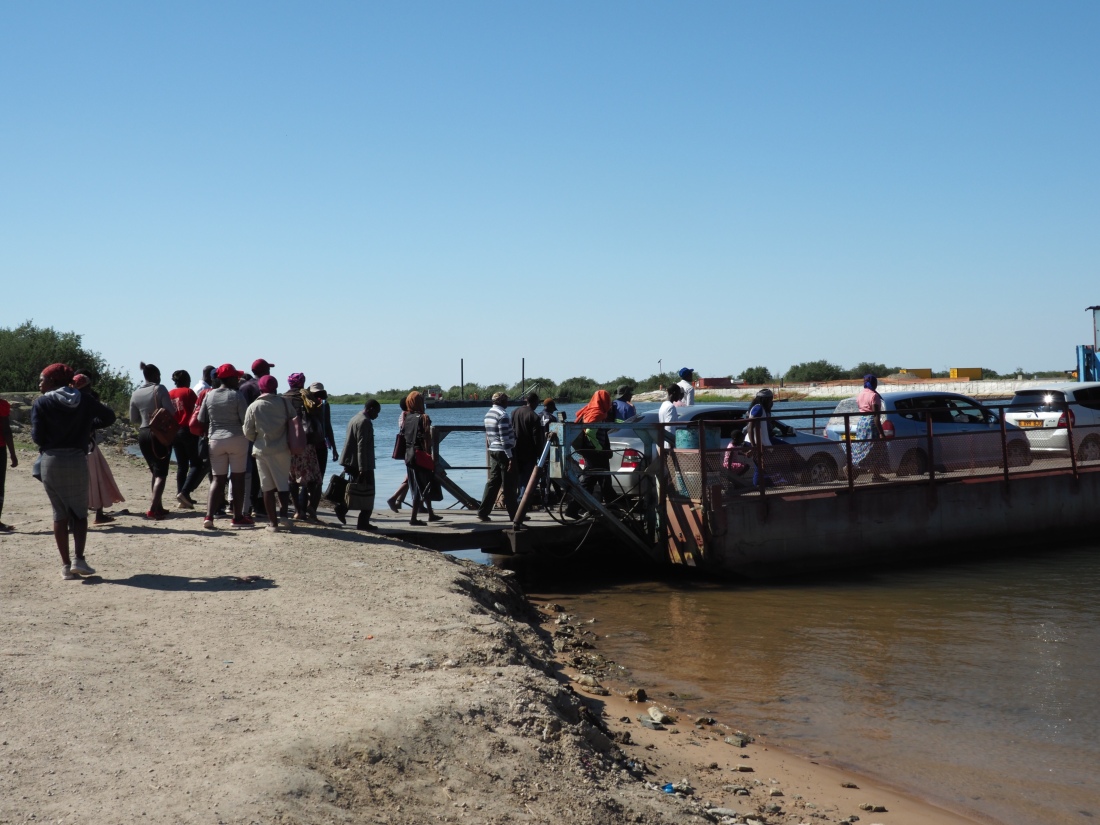 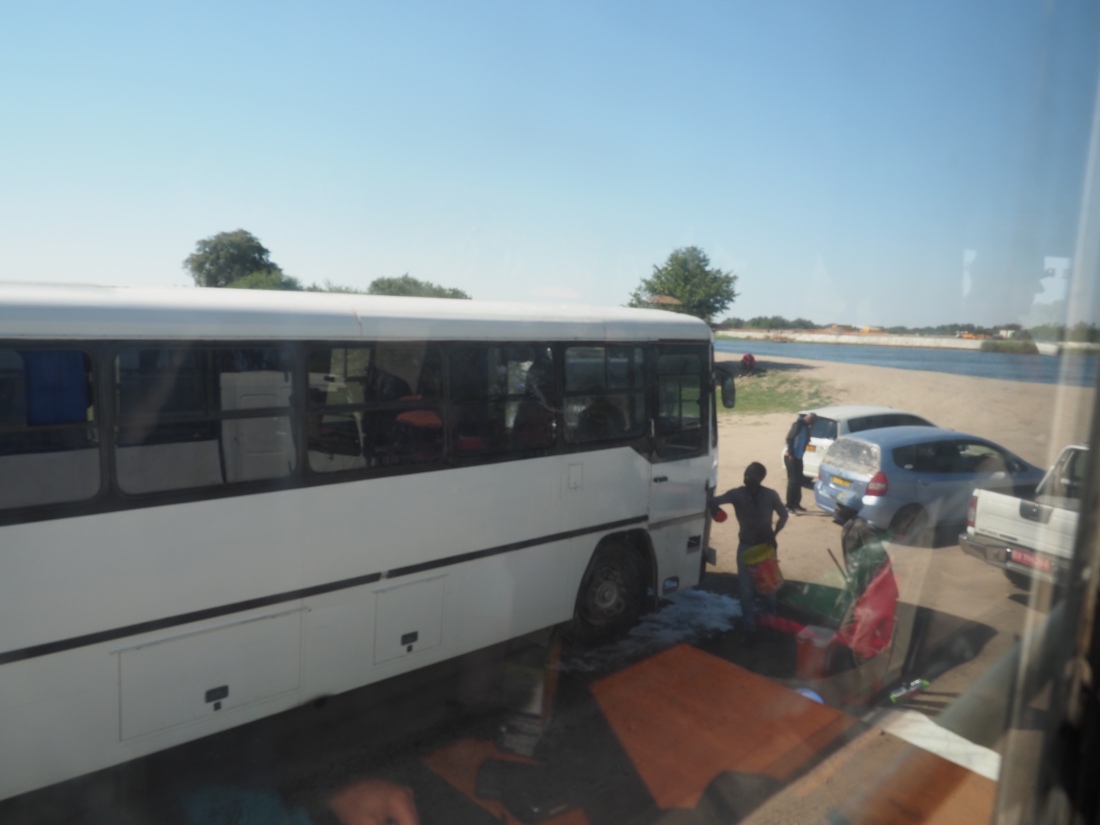 We had to wait through a couple of runs, because this white bus (not ours,) took up most of the next ferry, but eventually we got on.