“Bush camp” is a term used for a place with minimal facilities. Here, it meant pitching the tent on hard, gravelly dirt, and using a “long drop” toilet, whose only amenity was a screen that surrounded it. Henry wanted the kitchen located under the shelter of the boulder. Rain was not an issue here, but the winds carried dust. 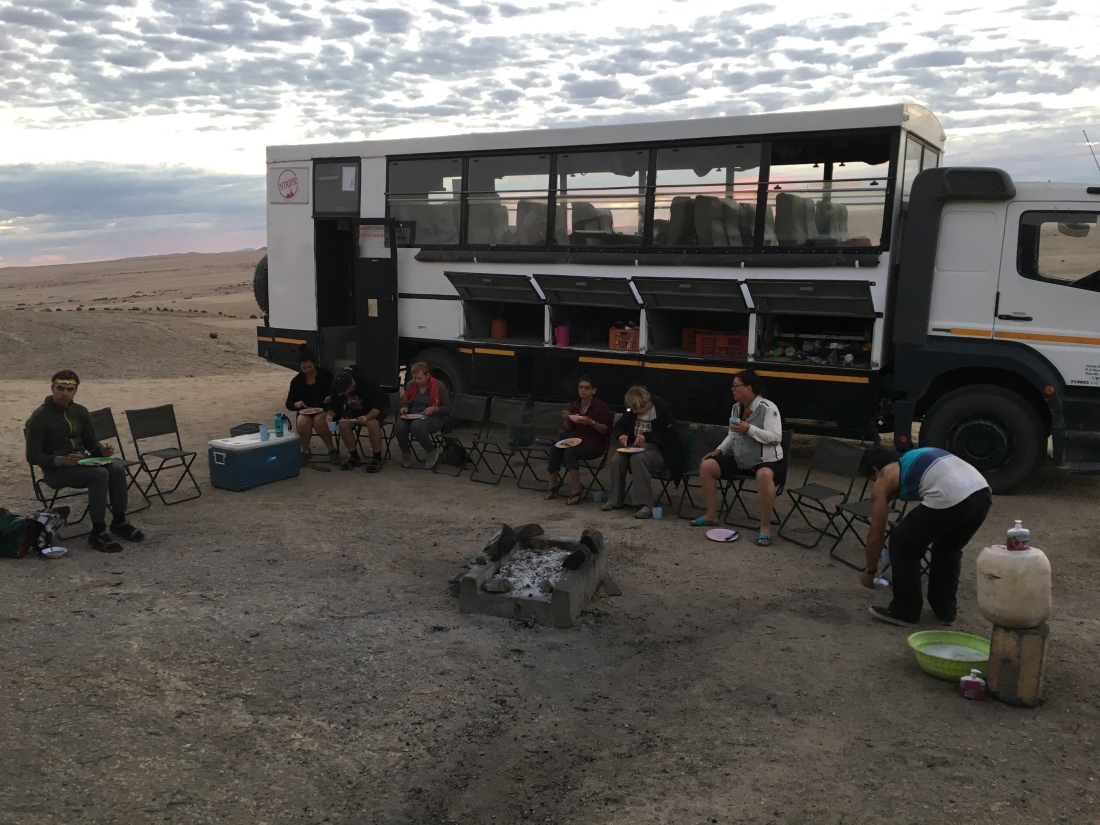 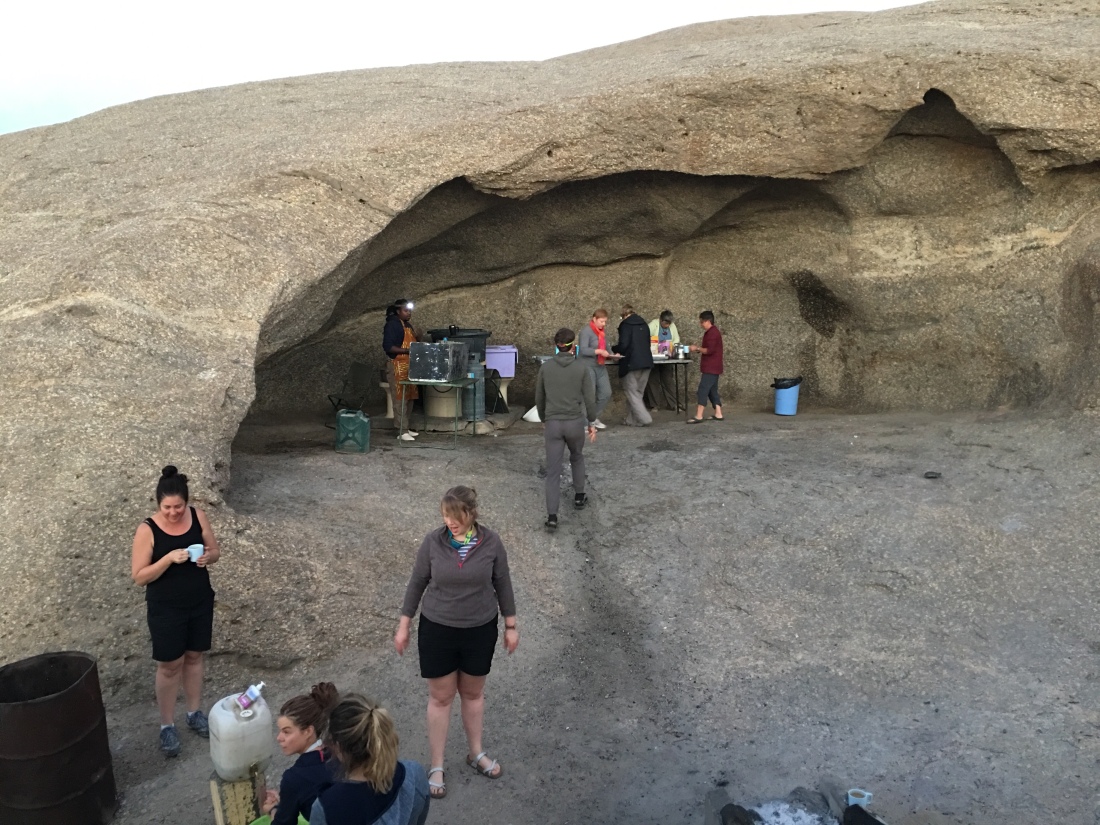 Mambo pitched in to help cook dinner, which was lamb grilled on the fire. 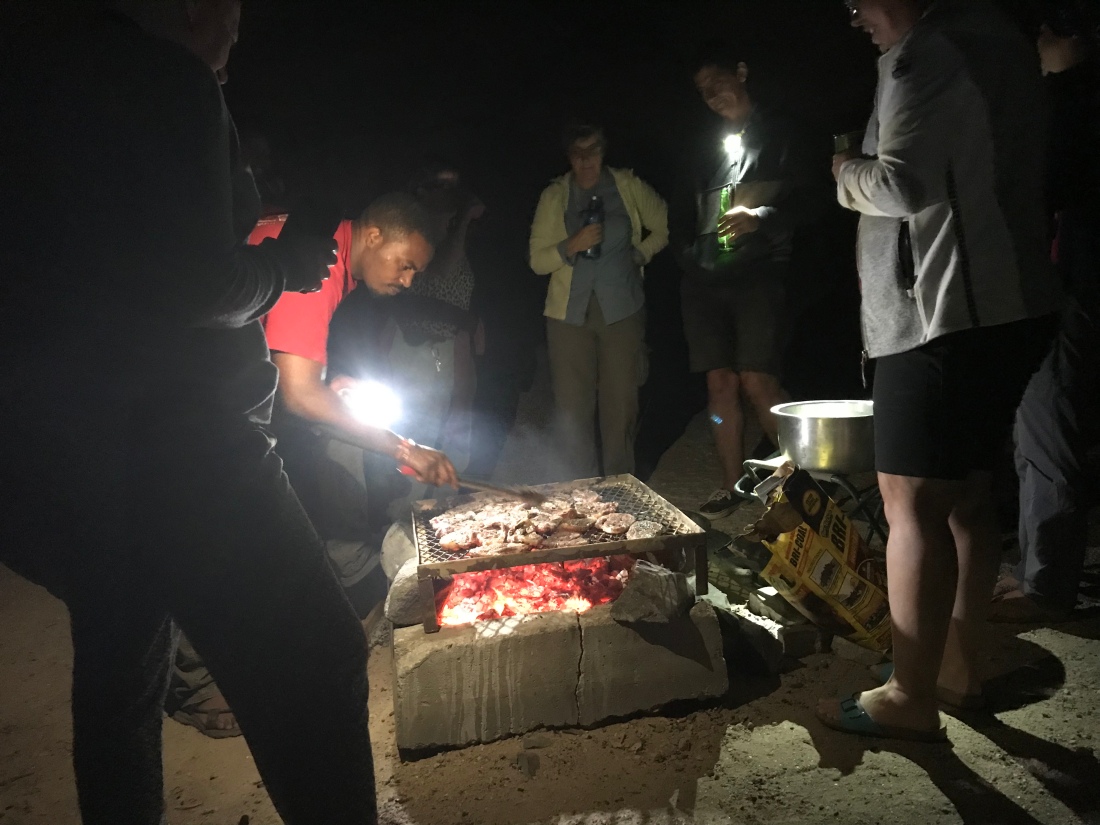 We were camping in the Namib, the ancient desert for which Namibia is named.

“Namib” is a Khoikhoi word meaning “vast place.” It is 31,000 square miles of desert, extending roughly from the Carunjamba River in Angola, through Namibia, to the Olifants River in South Africa’s Western Cape, bordered by the Atlantic Ocean and the Great Escarpment on the land side – about 125 miles wide. Annual precipitation ranges from 0.079 inches in the driest area to 7.9 inches near the base of the Great Escarpment. It is the only true desert in Southern Africa, according to some. These arid conditions have existed for somewhere between 55 and 80 million years ago, so the Namib may be the oldest desert on Earth, challenged only by the Atacama Desert in South America.

“Sand seas” (dunes) border the Atlantic Ocean, becoming gravel plains, and then mountainous outcrops further inland, huge boulders that break through the dirt. It is incredible in its dryness, flatness, and silence. It is a vast place. 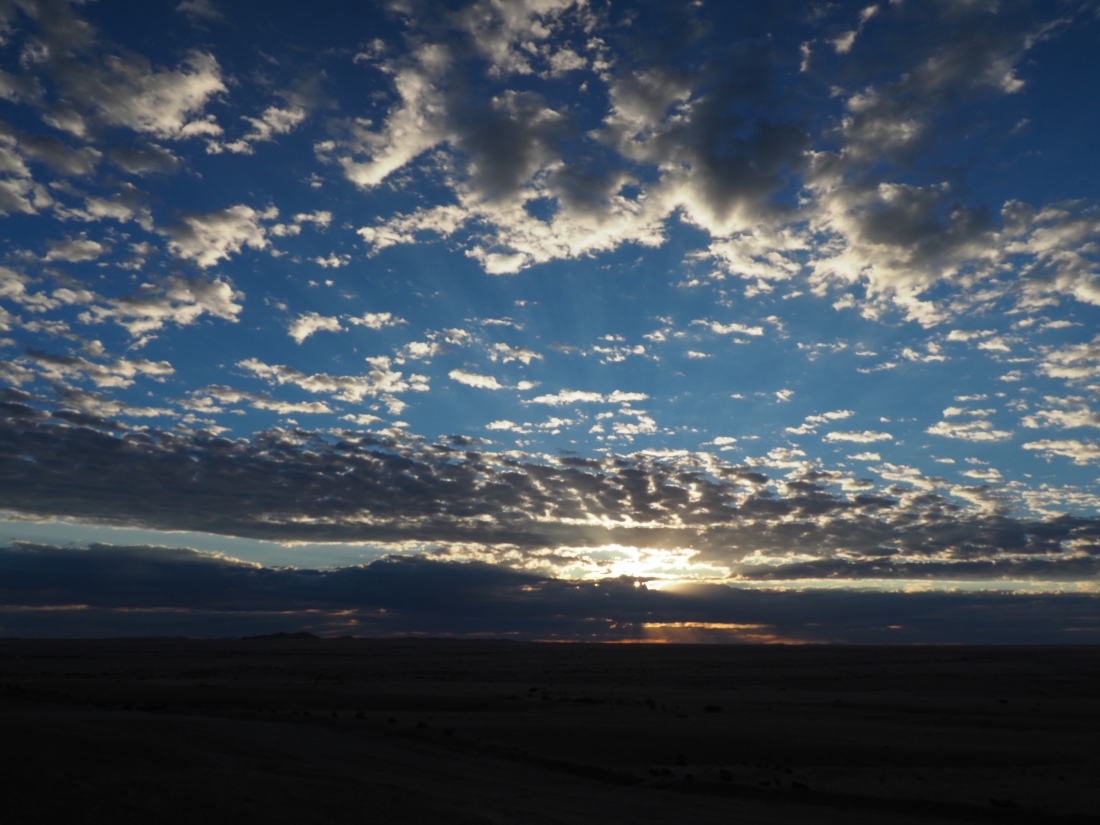 On this day, we crossed the Tropic of Capricorn on our way to Swakopmund, which of course necessitated a round of photos: 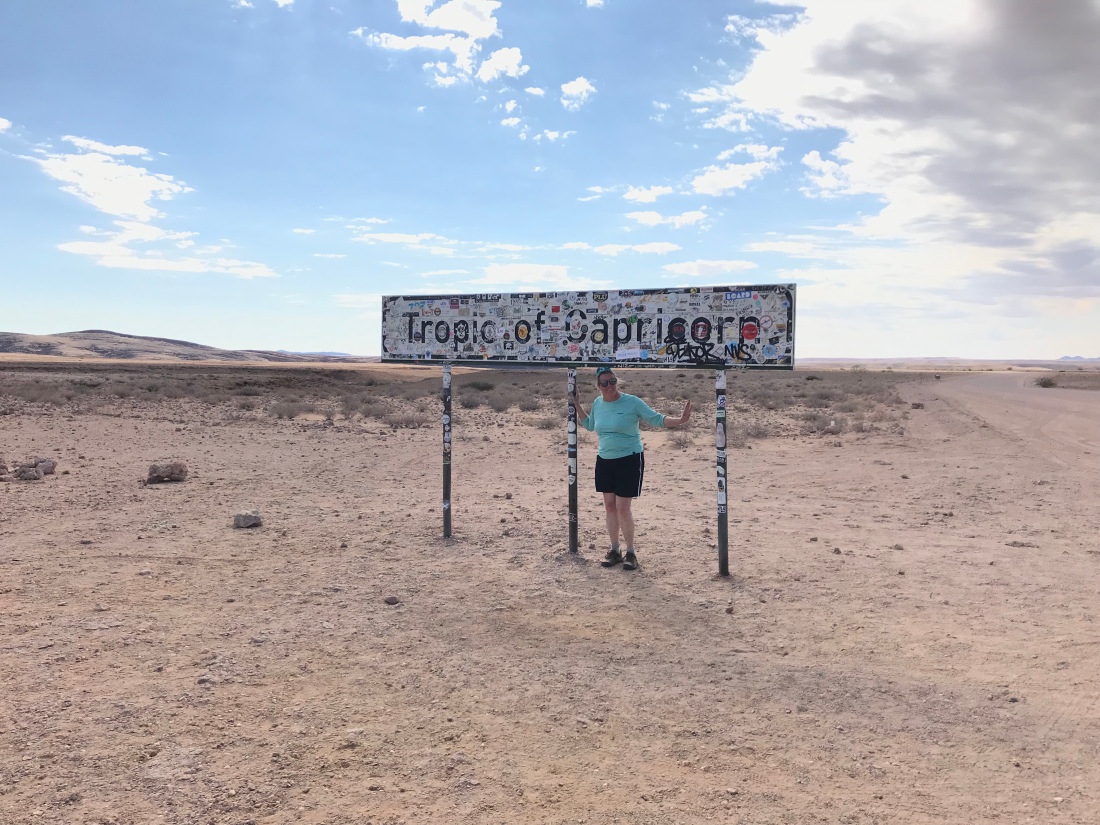 Even for the crew – Henry, our cook, is snapping a photo for John, our driver: 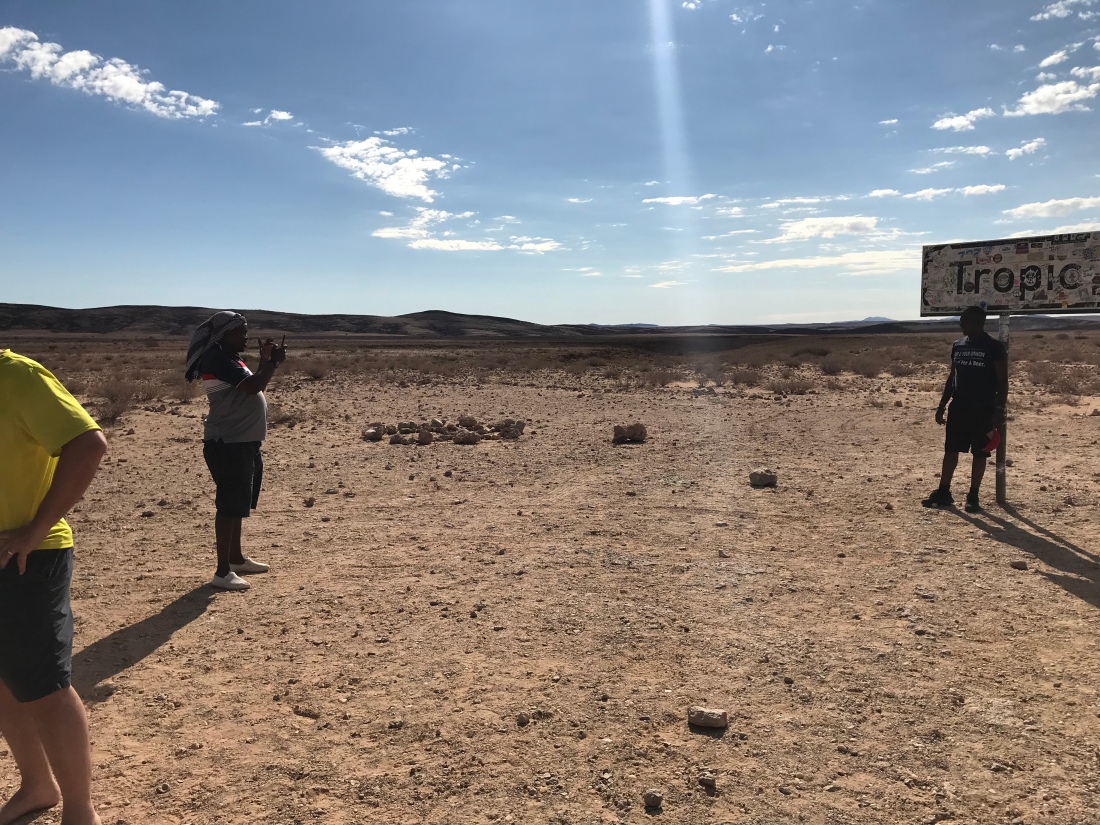 From here, we were driving toward the Atlantic coast of Namibia, which becomes more maritime as one moves north, and reminded me of the Pacific NW: dense fog in the morning along the shore which would clear as the day grew warmer.

The fog originates off shore, the result of the cold Benguela Current, the northward-flowing part of the Atlantic’s circulating currents, colliding with the warm air of the Hadley Cell, “a global scale atmospheric tropical circulation,” according to Wikipedia. The resulting fog helps vegetation survive in parts of the Namib Desert, but also has been a major hazard to ships for hundreds of years. There have been over a thousand ship wrecks along what became known as the “Skeleton Coast.” Most of the wreckage is below the ocean surface, but occasionally they were close enough to shore that the wreck is visible above the water, as here. 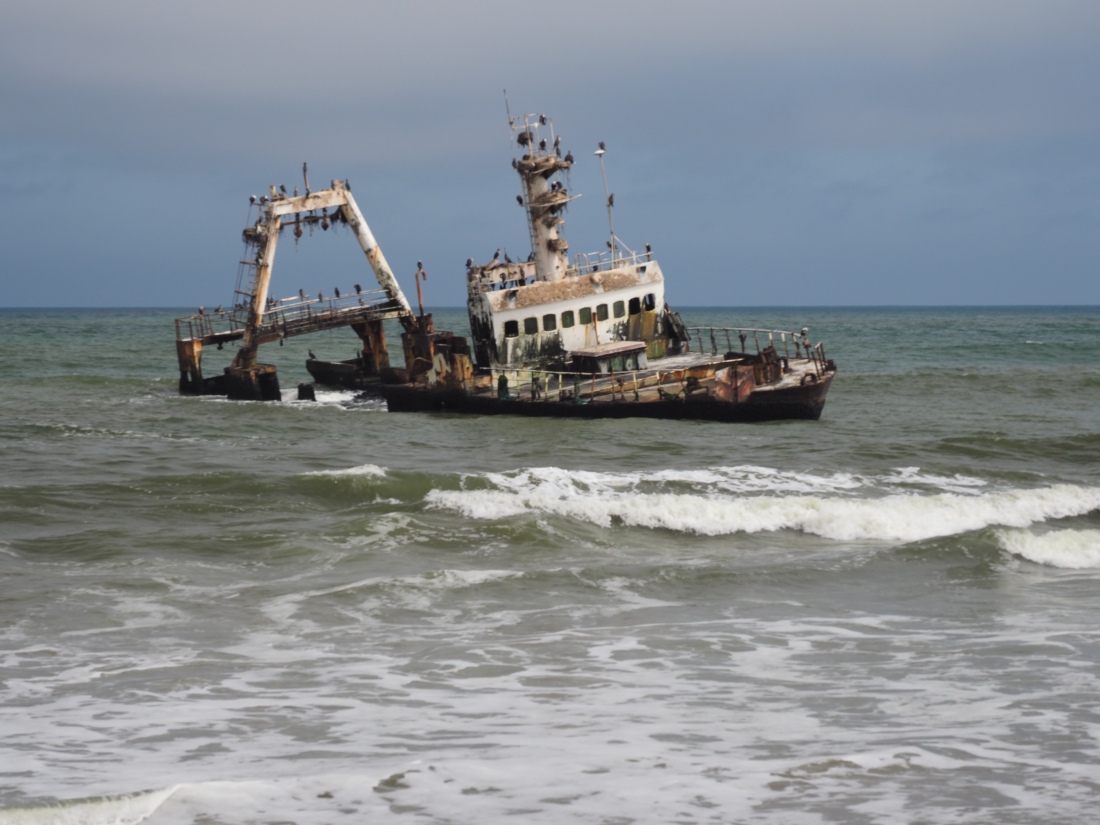 Another reason we came this far north was to see the seal colony. They had established themselves on the beach here, before the early European explorers landed and left their usual Cross or other commemoration. 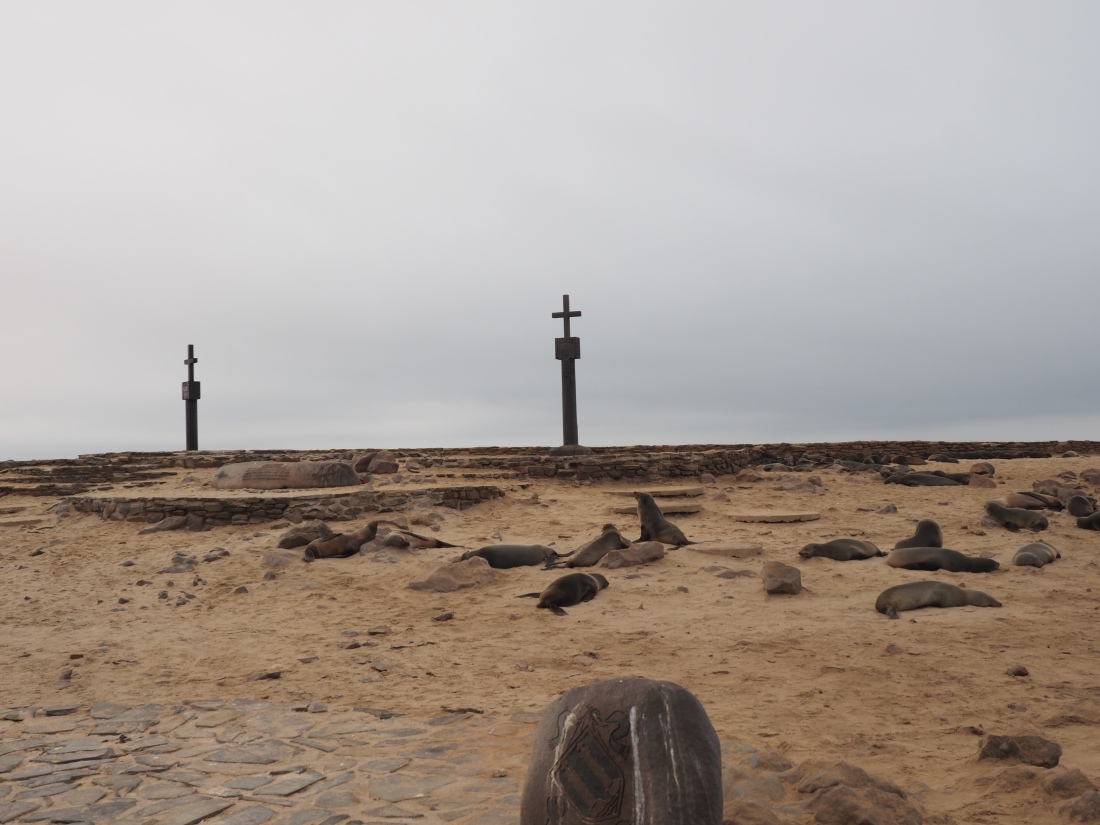 These are Cape Fur Seals, and they live in the Benguela Current mentioned previously, from the Arctic to this colony. Sometimes they are seen up to 200km out to sea, but mostly they stay toward shore. The Orca whales and Great White sharks prey on these seals in the water, and on land, their predators are black-backed jackals and brown hyenas. As is often the case, the baby seals are most vulnerable as the adults get to be over six feet long, some as long as eight feet, with sharp teeth and strong jaws. 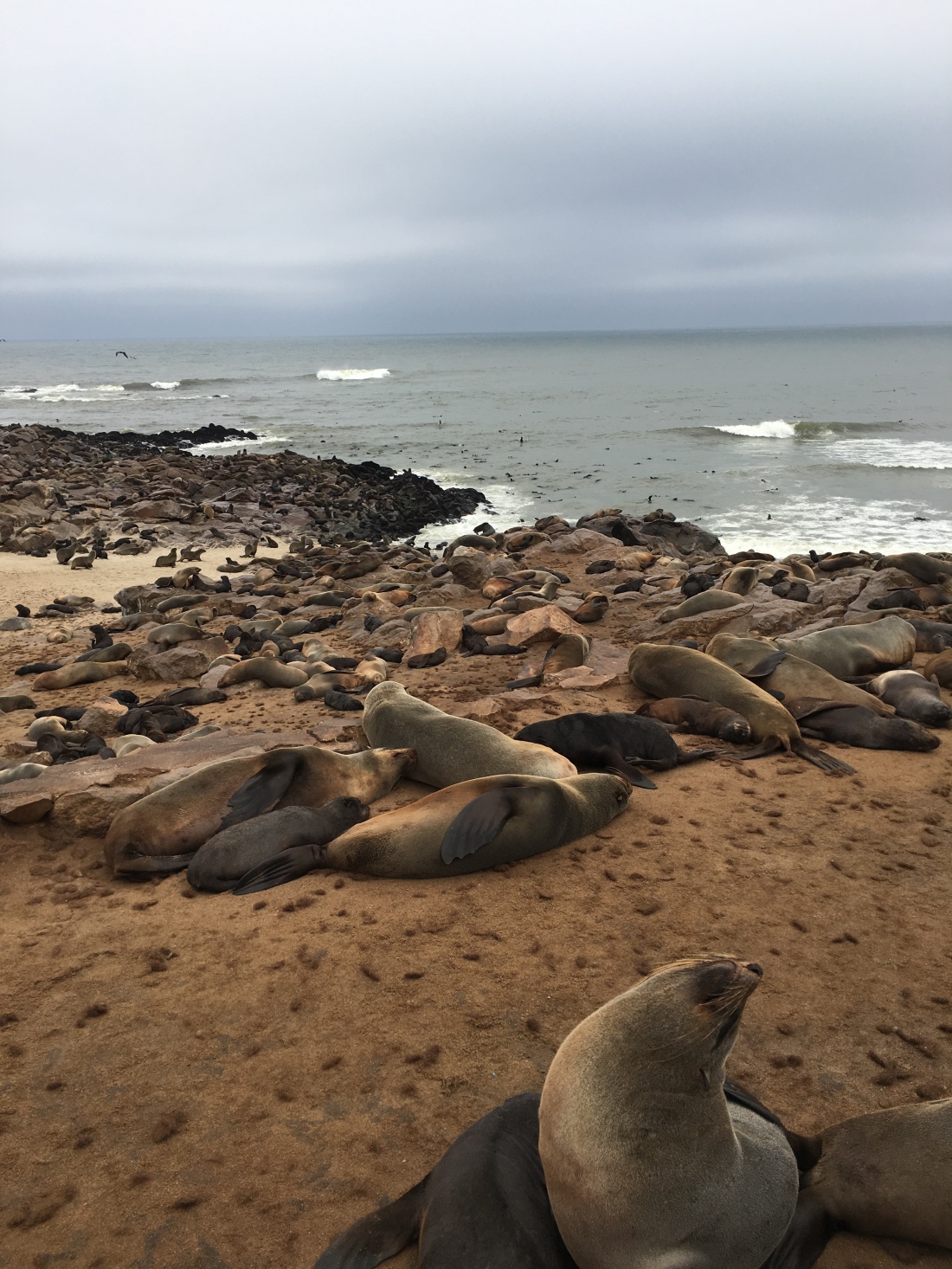 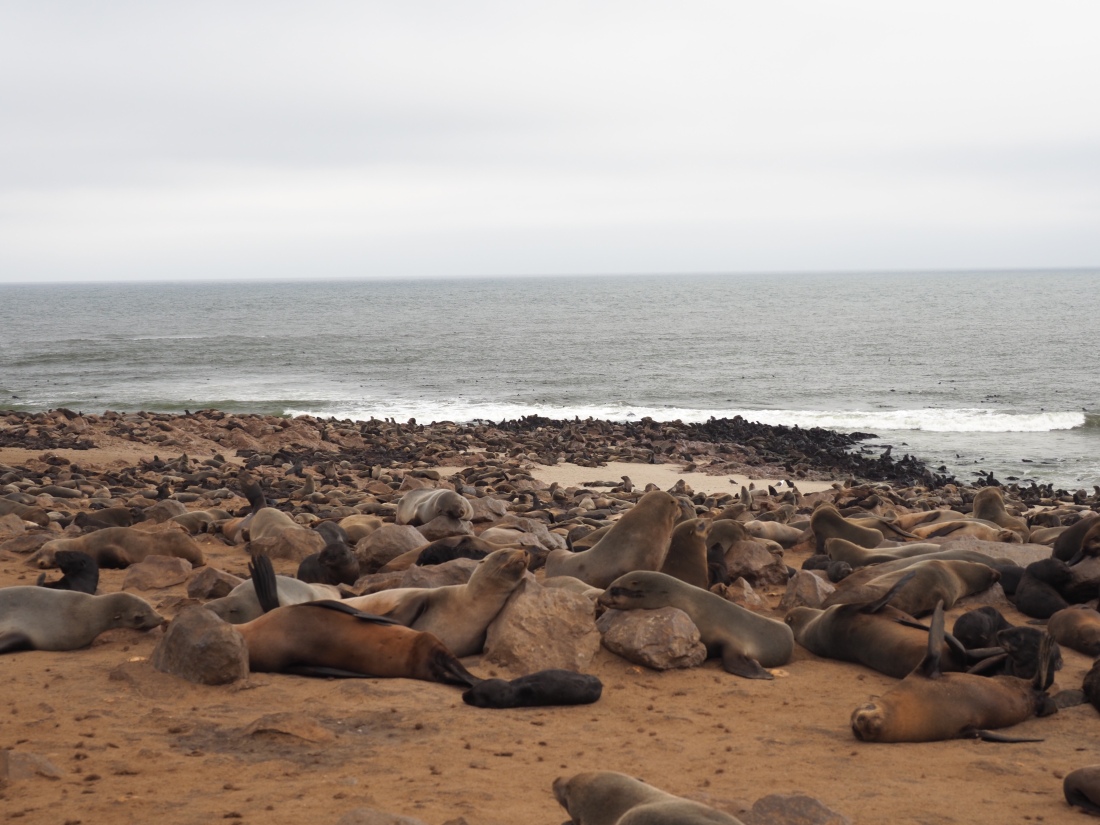 Humans also frequent these shores – we found this relic left by an imaginative someone with a wry sense of humor: 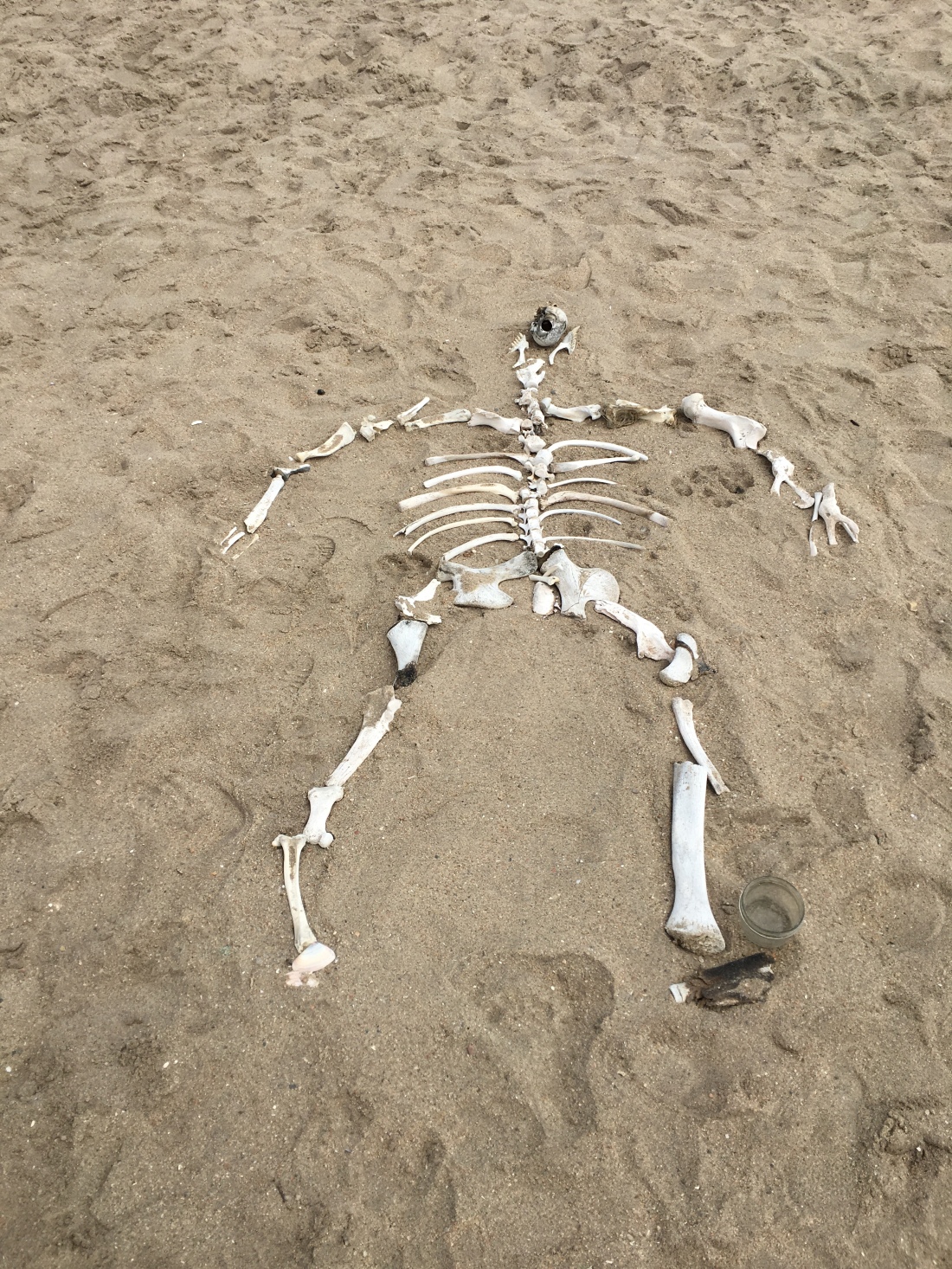 After visiting the seals, we returned to Swakopmund, a large town on the Skeleton Coast. It’s on most maps, near another large town, Walvis Bay, which has the airport. These two towns, having lost much of their traffic after trading developed other channels, have re-invented themselves as centers for “adventure sports:” ATV-riding on the dunes and sand-boarding, to name a couple.

This area was once a German colony, and the place-names reflect that. Katie, who is a German living in Switzerland, translated the street names and some of the shop names for us as we drove through the town on our way to the rest camp. I asked what “Swakopmund” meant, but Katie said that not every word was translatable. I learned why later.

Gail opted for a dolphin cruise along with others, but I was more inclined to relax in town. We stayed in the Swakopmund Municipal Rest Camp, which was nothing to write home about, but it was not a heavy tent with hooks! The bungalows housed four people. They were small, with a sitting room/kitchen area, a full bathroom, and two bedrooms with twin beds, so Gail and I shared one room, and Margie and Lois shared the other.

Except for breakfast, we ate out for the three days we were there. It was a break for the crew, a break for us, and an opportunity to catch up with laundry, as well as an opportunity to explore the town. Our group mission was to find an ATM for all of us, and a place that would do laundry. Practicalities sometimes have to take priority.

We celebrated over lunch, at the Village Cafe. Food was good, and the atmosphere was relaxing after being jostled by the bus during the week. This young lady, our waitress, was one of the many very friendly people we met as we traveled through Namibia: 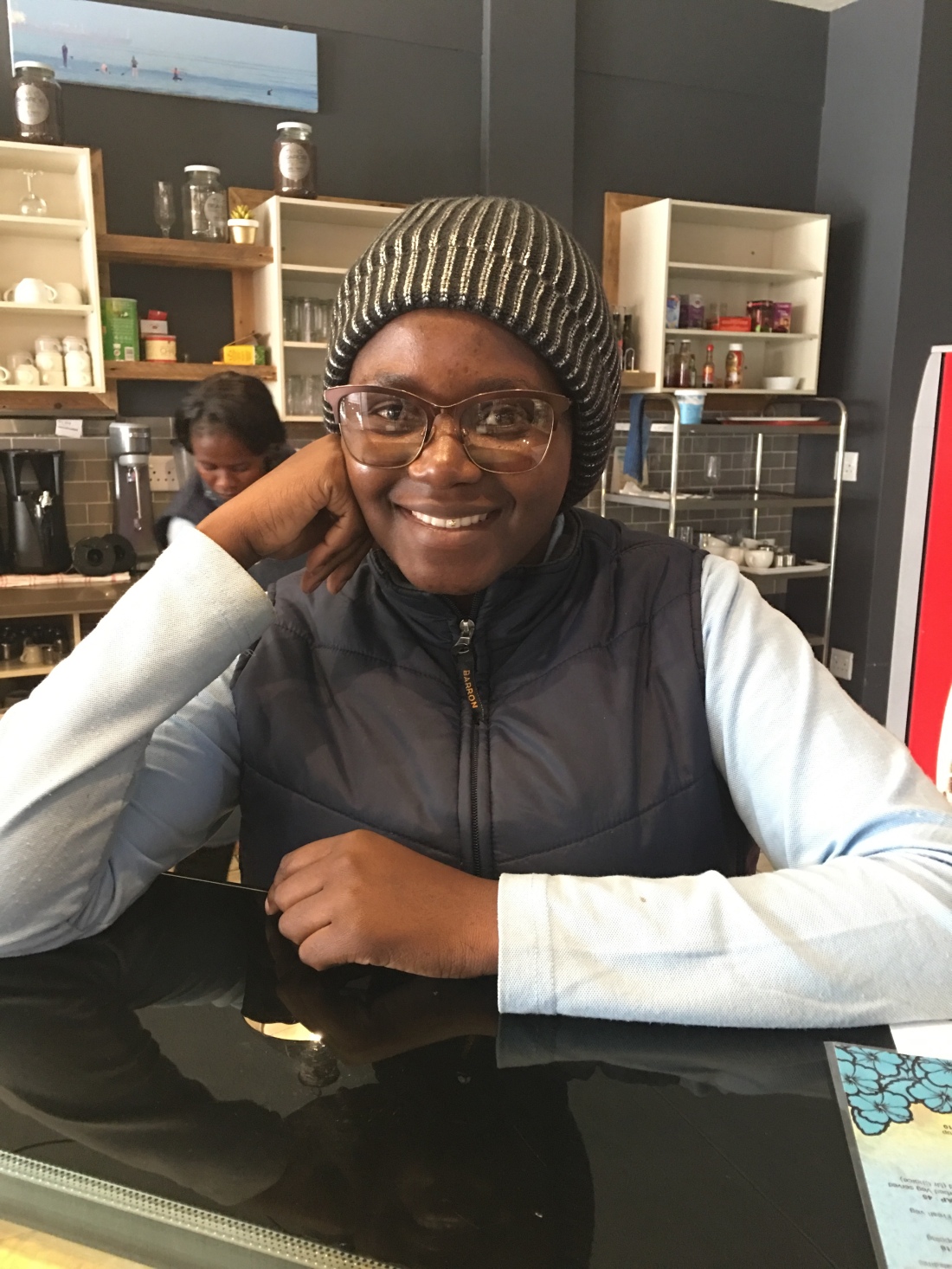 We did some grocery shopping for breakfast in the local Pick N Pay, where we ran into some Herero women, who dressed in their traditional clothing. While in the town, they wore cloaks, which covered their chests, but they did not wear shoes. They did their shopping in small groups, carrying their children in a traditional sling wrapped around their torso with the child snuggled against their back.

While we were in town, we visited the Museum, which was surprisingly thorough, documenting the German years and their way of life, as well as the local wildlife, including the Greater Kudu that we had seen in the bush (a rare occurrence.) 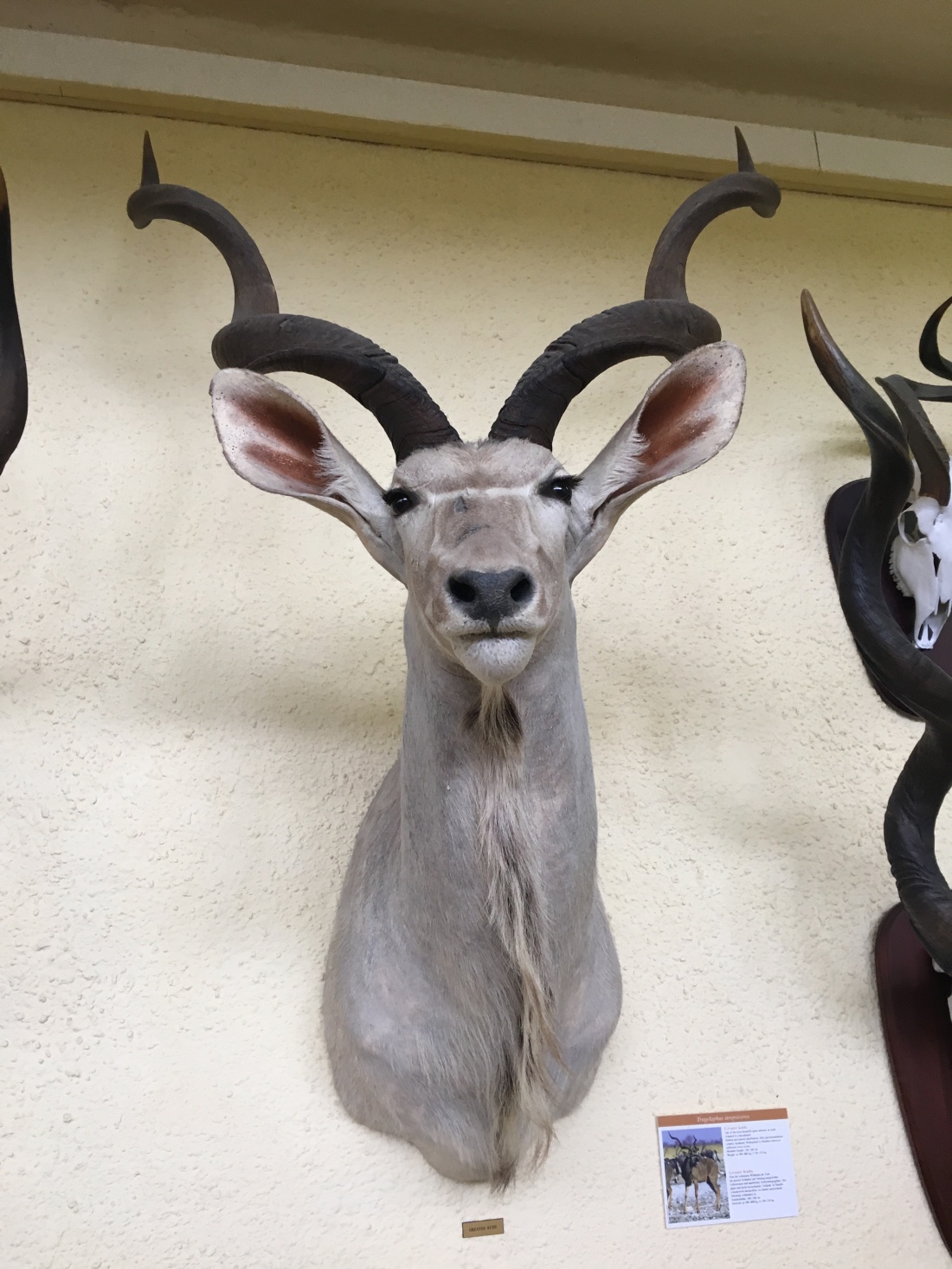 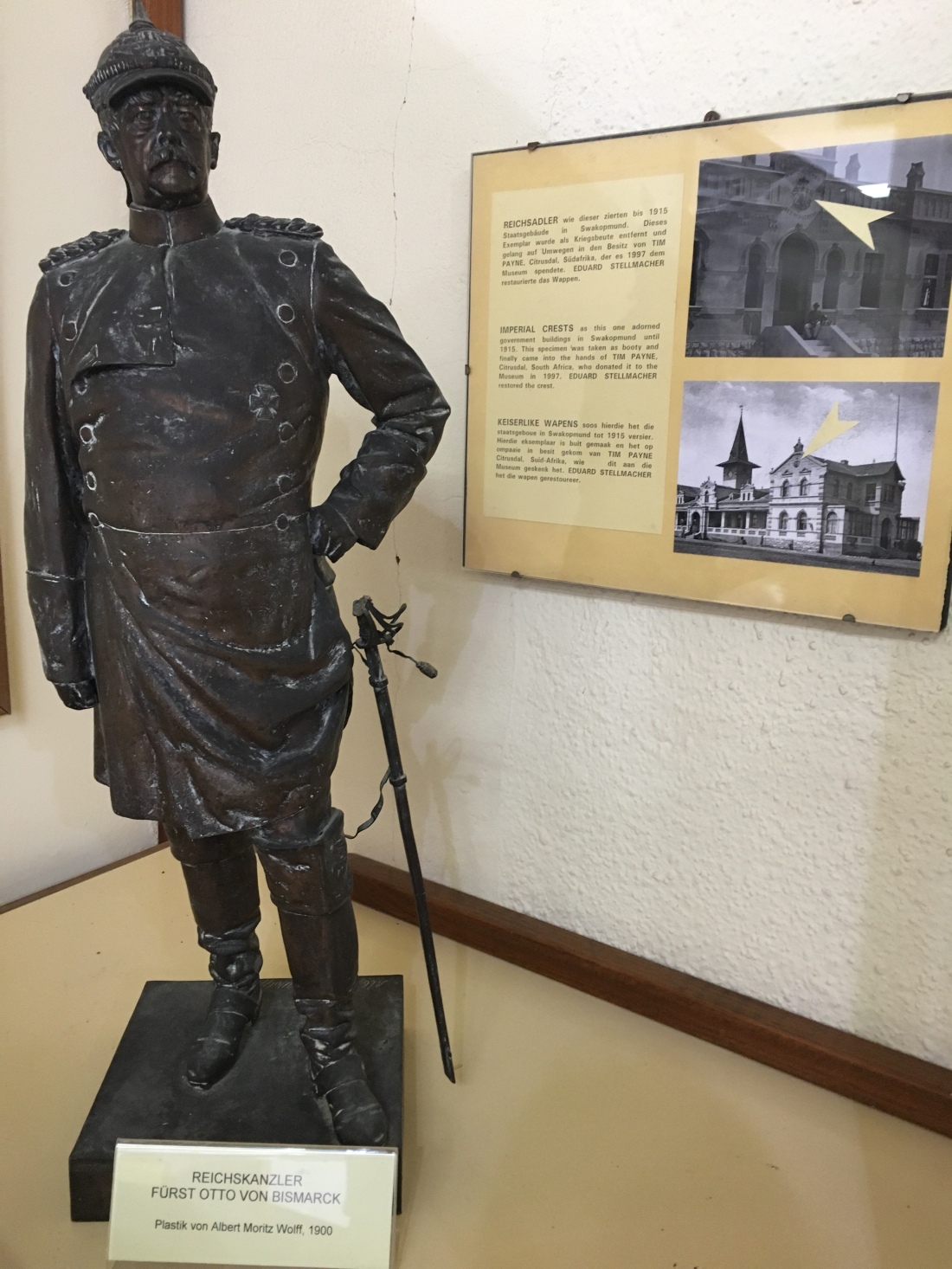 At the end of our visit to the museum, as I was paying for postcards, I asked the docent what the name “Swakopmund” meant. She was a little embarrassed, but apparently decided that facts were facts.

“Well,” she said, “the Swakopmund River is an ‘ephemeral river,’ meaning that it only flows sometimes, when there has been rain further inland. When this happens, the powerful flow of water pushes the sand and silt down to the mouth of the river, here.” She hesitated. “And it makes the water here brown and thick…as if it was diarrhea.” She breathed out with relief, having spilled the awfulness. “‘Swakop’ is the word for that. ‘Mund’ means ‘Town.'” I smiled, she smiled, and I thanked her for the explanation, understanding finally why no one wanted to tell me.

The best part of the afternoon was sitting in the cafe outside of the museum, watching life on the beach, with a cup of tea, and my companions, my curiosity satisfied. Still, I pondered why the residents had not considered changing the name. 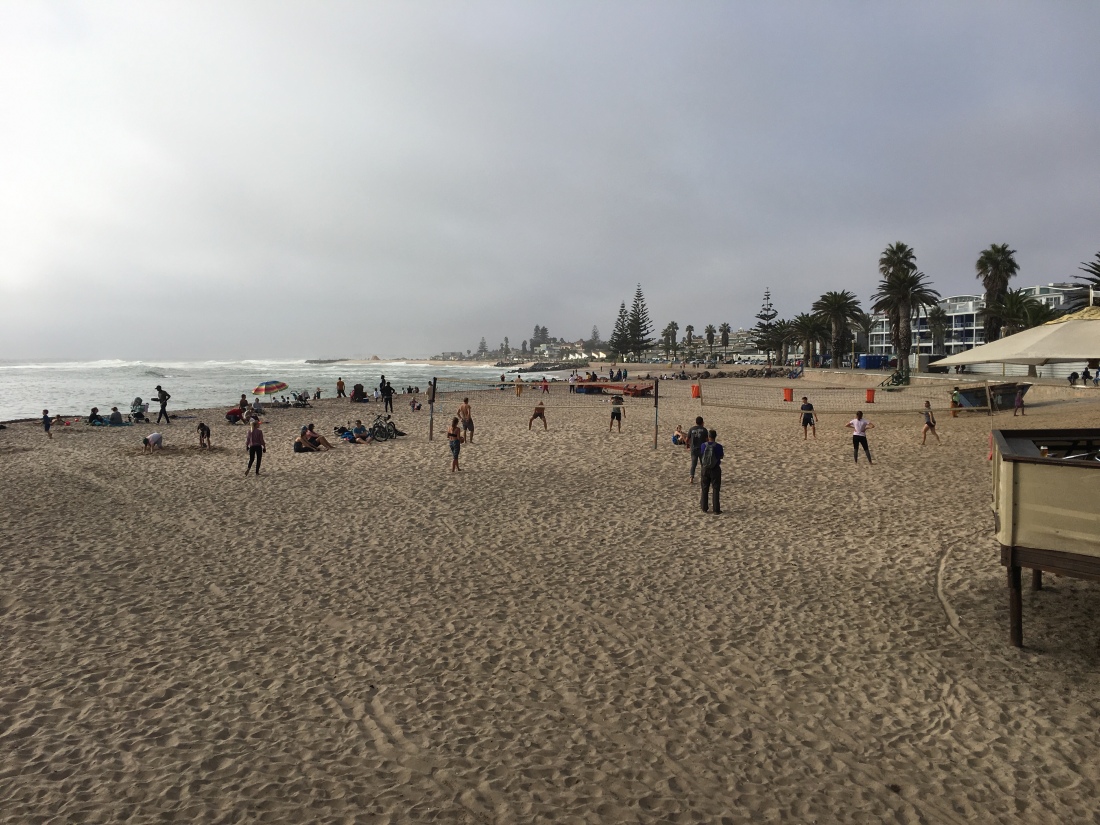 At first, I saw some adapters and USB cords, but not the one I needed. I asked the clerk, who said “Over on that shelf,” pointing to where I’d looked,”is the only adapter you will need.” A pretty big statement. I looked closer, and there was a box of adapters of the type I needed. The box presented a blank side to the front, so it wasn’t surprising that I missed it.

I asked if I could take his photo. He asked why. I said that I try to remember to take photos of the people I meet, and not just photos of “things.” I explained that I write a blog for my friends and family, I don’t have thousands of followers, but I would like to post his photo, if he didn’t object. He decided it would be okay, so I asked his name. John Richard Victor. The way he said it did not invite the natural inquiry about “Chucky,” so I let it be. 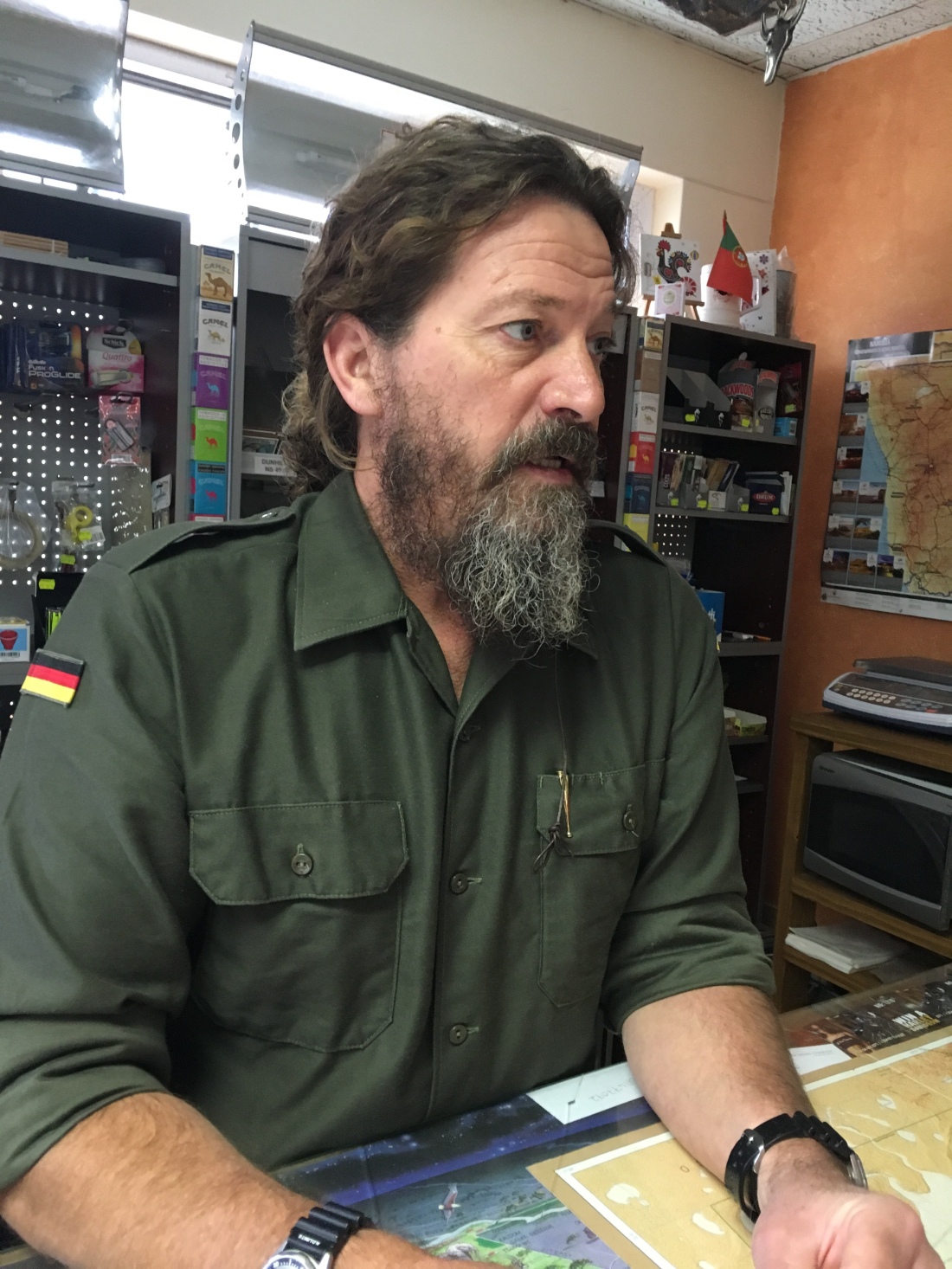 Had he always lived in Namibia? “My bloodline arrived here in 1746,” he said. “So your family has always lived here?” He nodded affirmatively. He was very nice, and Margie and I enjoyed talking with him, brief as it was. In the photo, Mr. Victor (he was rather formal in his bearing) is holding one of my cards, so I hope he looks this up and approves.

We left Swakopmund the next morning and ventured onward into Namibia, leaving the Atlantic behind.