We crossed from South Africa into Namibia the next day. My experience with border crossings was, up until now, landing in an airport and going through an immigration line, buying a visa, and then proceeding. One of the nice things about being an American is that getting into just about anywhere is pretty easy. (But remember, they don’t have to let you in – always be polite.)

At border crossings over highways, the drill was that we stopped at the gate of the country we were leaving, in this case, South Africa. We exited the bus, stood in line, and received a stamp in our passport that indicated we were cleared to leave. I suppose it meant that they didn’t see anything in their database indicating we owed money or anything like that.

We would re-board the bus, drive a short distance, exit the bus again, fill out a form asking our name, passport information, where we came from (e.g. South Africa,) and what our address in Namibia would be, i.e. we weren’t going to be living on the street or squatting somewhere. Our next campground and general appearance was enough.

The border crossing was at Vioolsdrif, Namibia. Namibia welcomes American tourists, along with many others, and our group had no trouble being admitted.

We spent the next twelve days in Namibia, spending our first night at a campground called Felix United, then on to the Fish River Canyon the next morning. 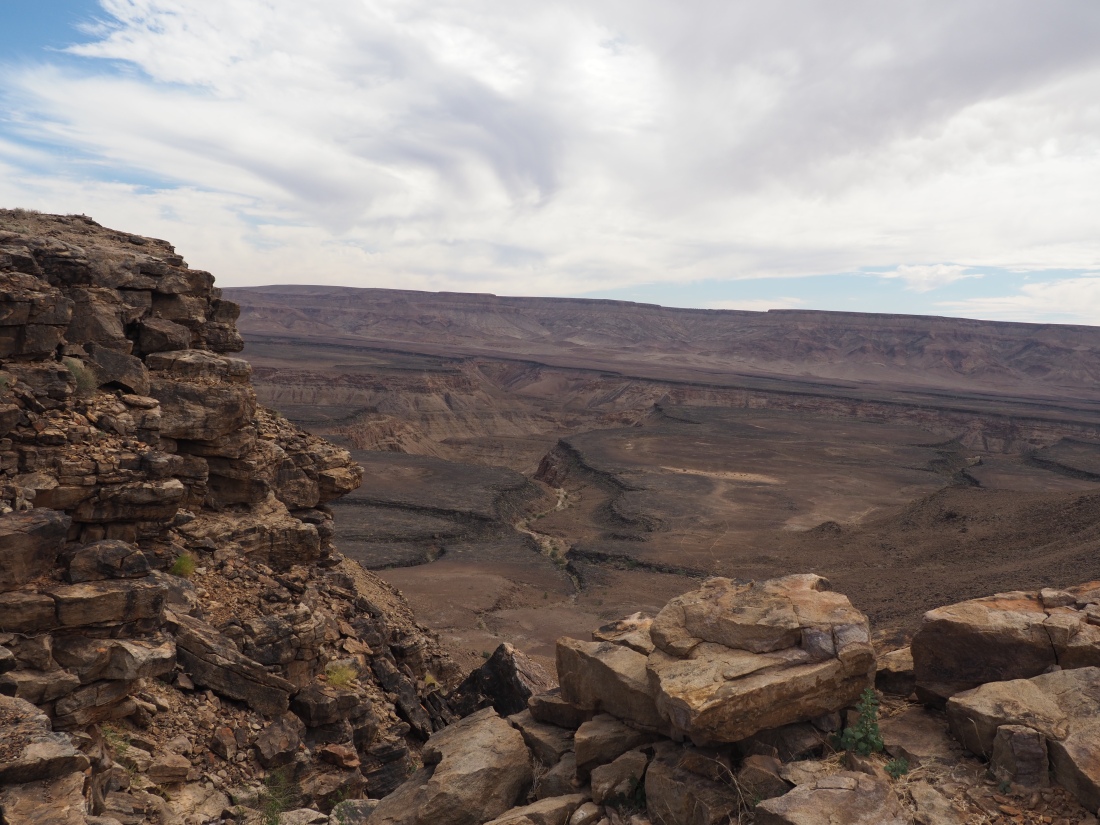 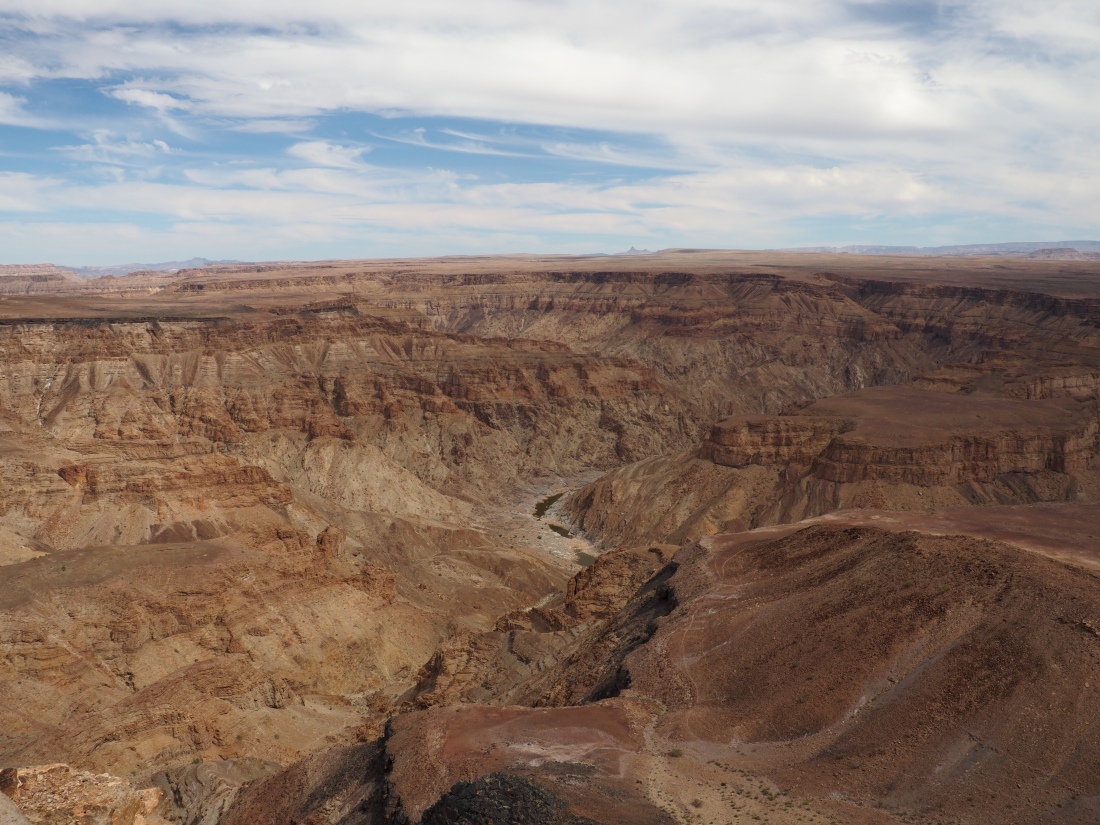 Fish River Canyon is the result not only of river erosion, but also the geologic formations that happened when the tectonic plates carrying South America and Africa came apart millions and millions of years ago. Part of the river canyon sank, changing the erosion pattern, and so it is possible to discern two erosion patterns – the shallower one in the first photo, and the deeper erosion in the next two photos.

We also saw a “quiver tree,” so-named because the San people used to strip a piece of bark from the tree to form a tube, covered the bottom, and used it as a quiver for their survival kit in the desert, Mambo explained. They would carry their tools for starting a fire, their arrows, and their bow in this quiver. The San used the smooth, white bark you see on the upper part of the tree. The photo below shows what the bark does to heal itself when it has been damaged by, for example, cutting a quiver-sized piece of bark.

The San no longer live in this area, and making a quiver is now mainly a cultural exercise, so this tree was not damaged by them. Given the carvings that were on it, I would guess that tourists were responsible for this, despite the fact that this national tree of Namibia is now protected.

We passed a Namibian road construction project just after lunch. Having been involved with county-level public works departments in two states, I still have some interest in projects like this. 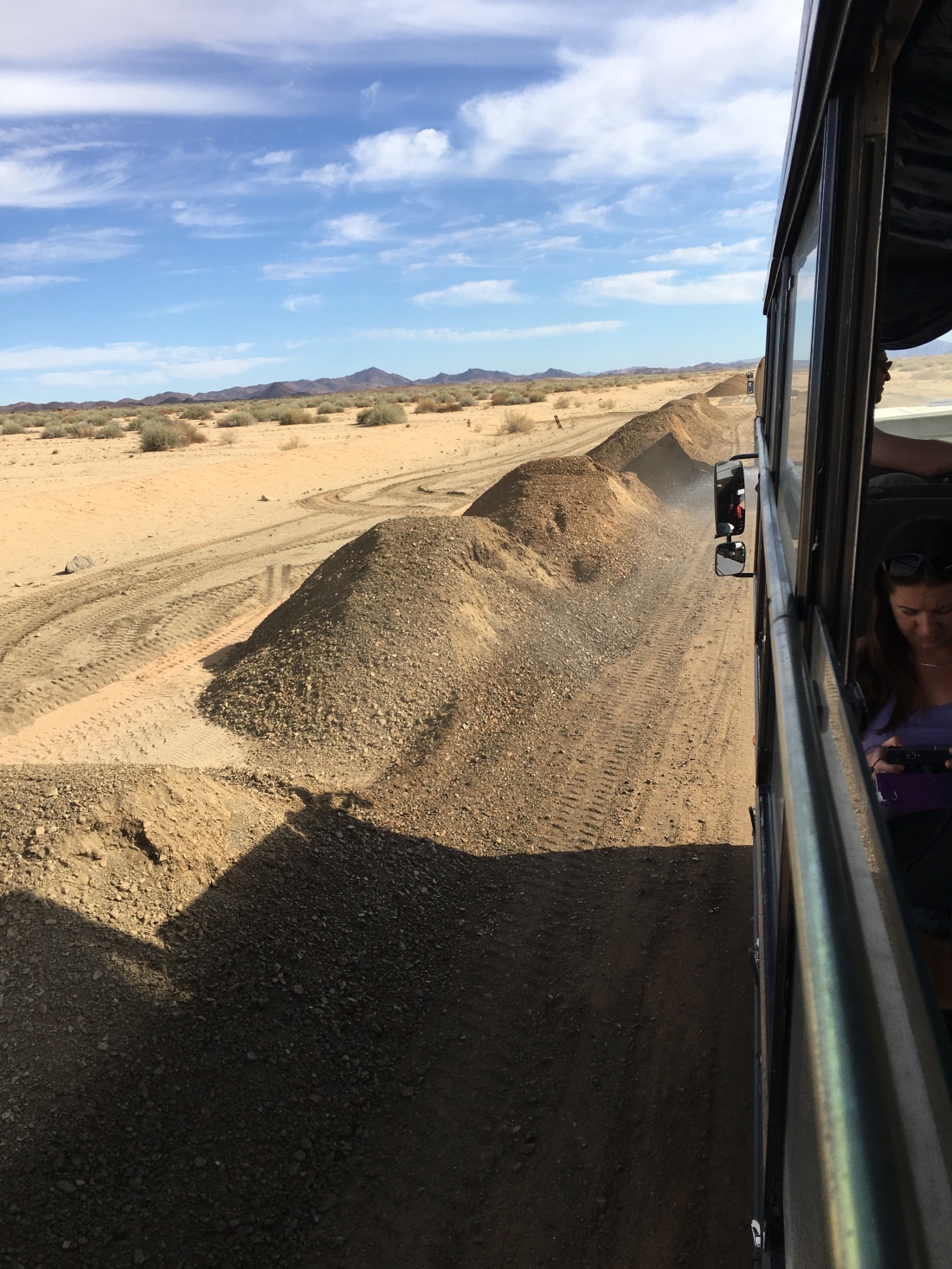 They were building a road that would ultimately be paved. Because of the size of Namibia and the scarcity of populated areas, the workers live in temporary housing along the way, rather than transport in and out. I couldn’t help but wonder what CSEA would say about this.

Our campground that night was in a resort named “Ai Ais,” which means “burning water,” referring to the sulphuric hot springs that heated their pools. No photos. I couldn’t wait to get into the pool, and it felt very good after spending the day on the bus and hiking at the canyon.

Ai Ais was our first almost-close encounter with baboons. While setting up camp, we saw a woman trying to unload her car when a baboon dashed up and grabbed a bag from the trunk, thinking there would be food, no doubt. There was nothing she could do but watch as the baboon tore the bag apart. Baboons are strong and can be mean when they feel threatened. We made sure to clean up after dinner that night, and everything was locked down tight. Baboons also retire for the night in their favorite trees, but we were taking no chances. 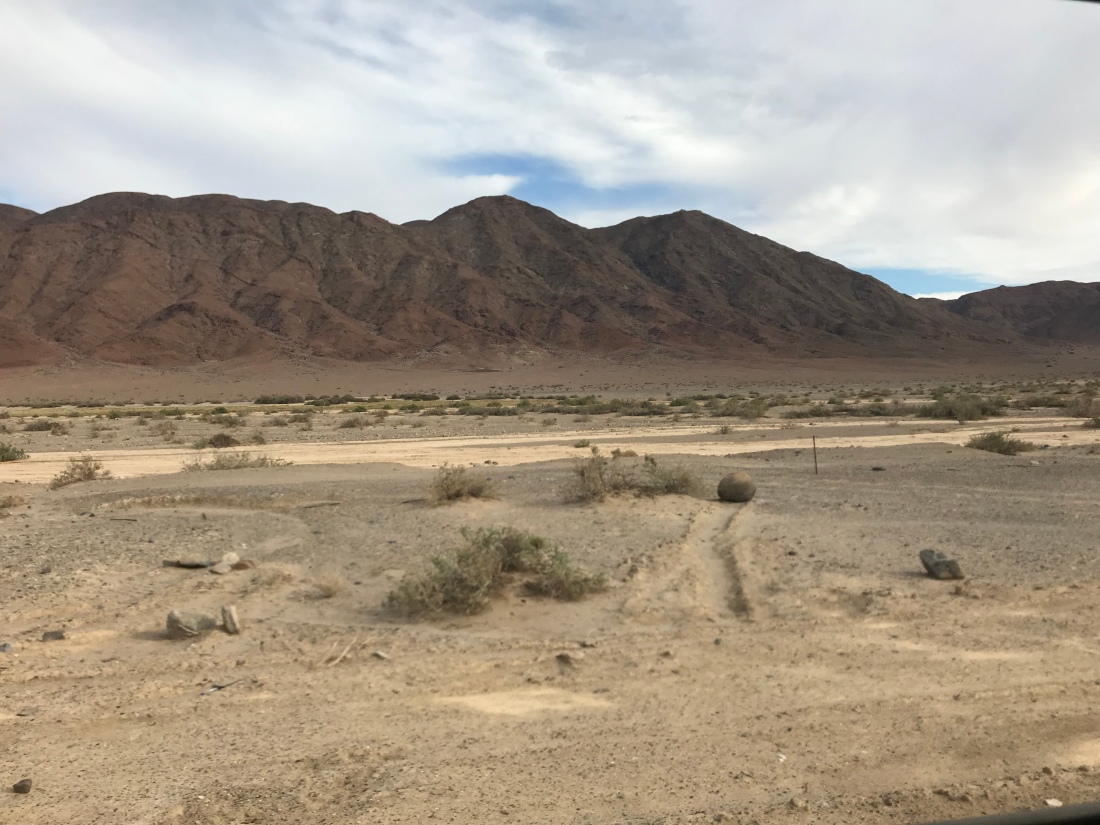 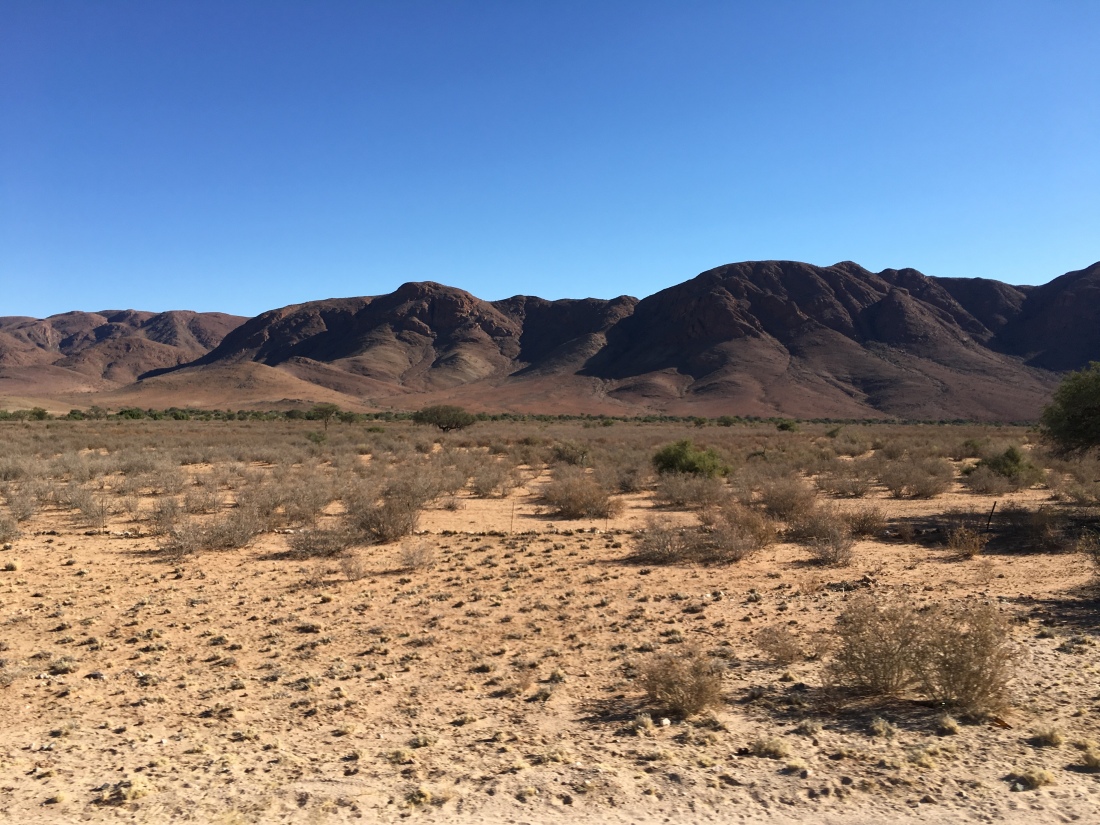 From Ai Ais, we drove onward to Sesriem, near the border of the Namib-Naukluft National Park. It was a long day on the bus – people passed the time in a variety of ways – sleeping, staring out the window, reading. One group, sitting at one of the tables, played cards, and amused the bus with their good-natured competitive banter.

The roads were dusty. Closing the windows made it too hot, having all the windows open made it too dusty. We settled on a window or two open in the front, and a couple of windows open in the back, creating a breeze. There were curtains on the windows, but with the wind blowing through, they were a nuisance, flapping in the wind and in our faces. It became routine to twist them into a thickish rope and tie them off to the over-seat shelf braces. When the sun was at an angle that heated the occupant, the curtain would be untied and sat on to keep it from snapping the other passengers. It worked.

At Sesriem, we camped in a place that had Social Weaver birds, their nests clustered together in the trees. From a distance, as we passed them on the highway, I had wondered if they were some kind of animal resting in the tree. (We were hoping for leopard!) 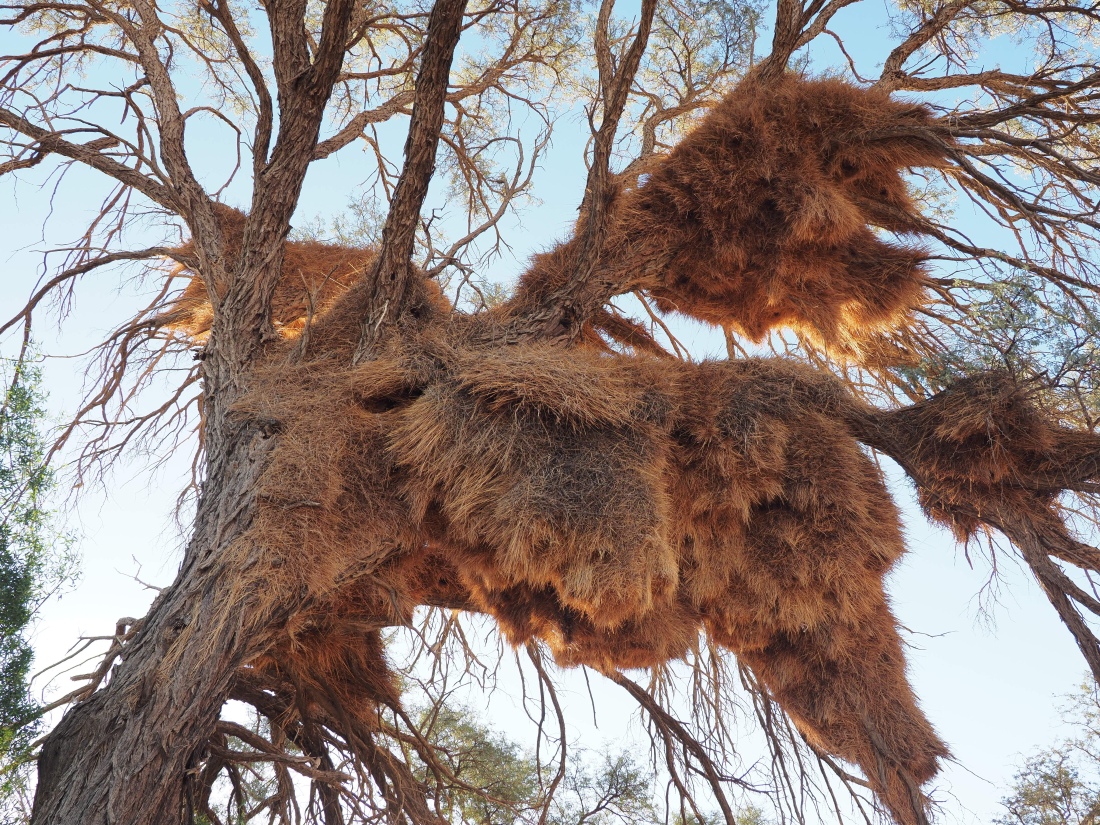 At Sesriem, after camp was set up, dinner eaten, and dishes done, Lois offered me a whisky and Coke, and I accepted. I don’t drink much – the occasional glass of wine, never beer (I’m allergic,) and very rarely a cocktail or mixed drink. But hot days in a jostling bus take their toll, and we shared several drinks over the course of the trip, which I appreciated immensely.

The reason you come to Sesriem is to experience the dunes, specifically Dune 45. Dune 45 is 45km from Sesriem, you see. It is quite tall, and the thing to do is to climb it before dawn and watch the sunrise.

We were up, packed, boarded the bus, and we were in line to exit the camp by 5:15 a.m. (The campgrounds where we stayed were often surrounded by fencing to keep animals out.) It was dark, but the morning light was tipping the balance toward sunrise as we drove out and toward Dune 45. We climbed off the bus and began climbing up the dune. It was hard, and it brought home to me how out of condition I really was. On one side of the dune, the sun was coming up, and on the other, the moon was setting. 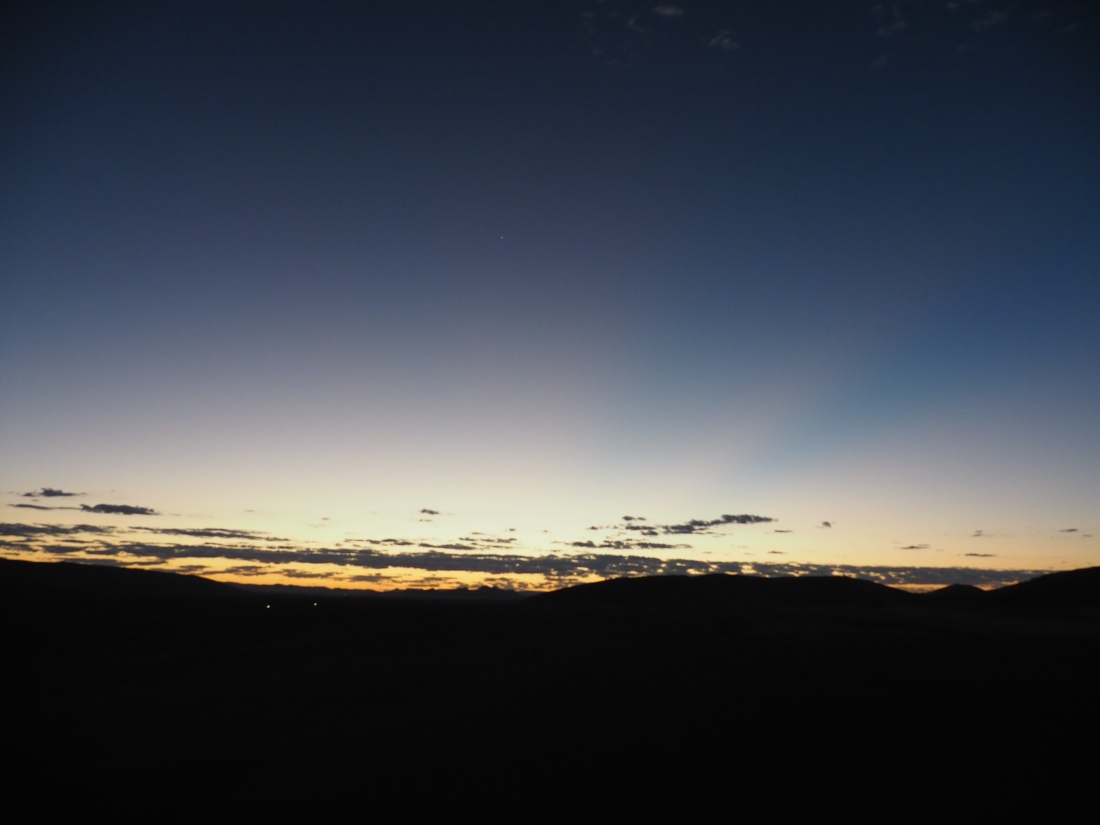 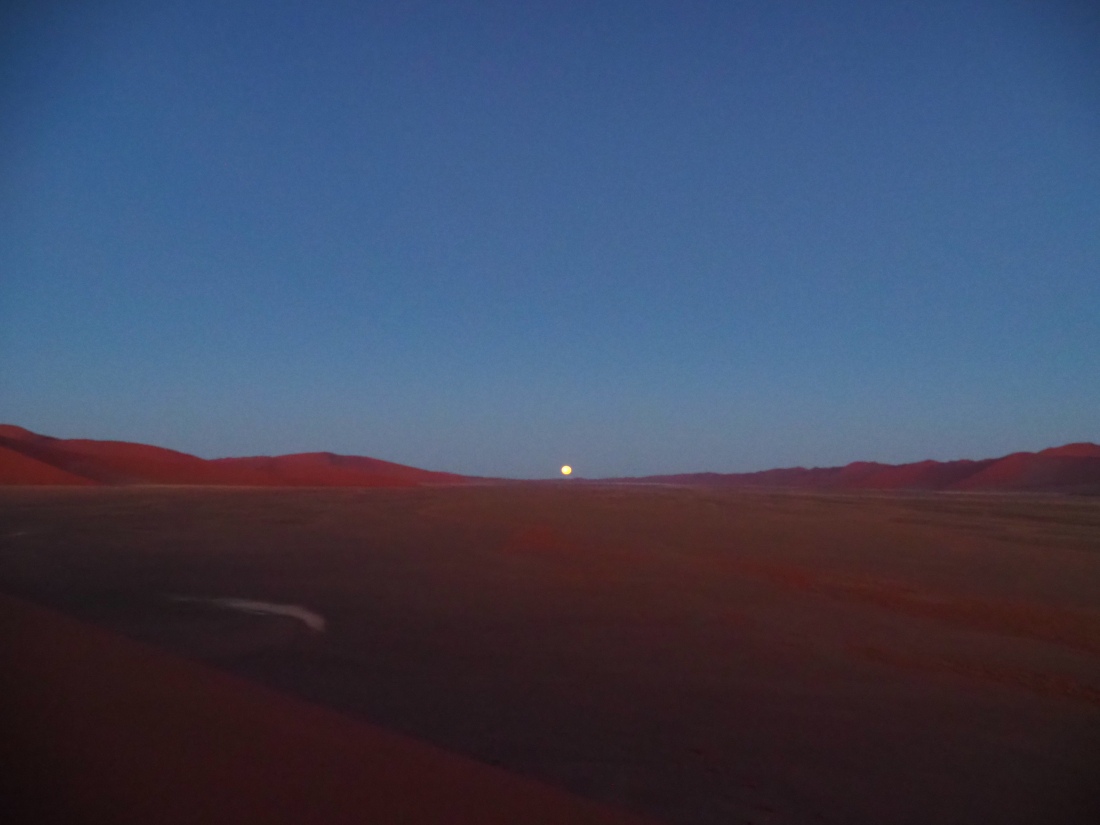 Dune 45 in the daylight: 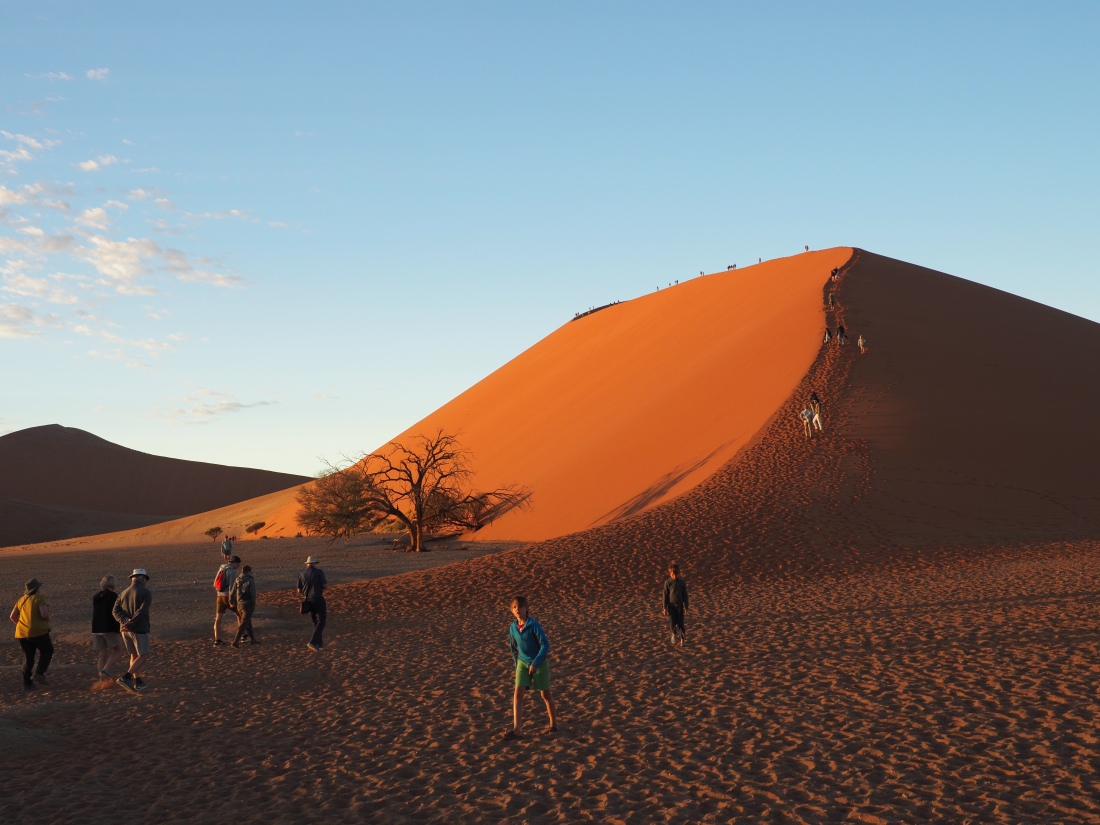 After breakfast, which Henry had waiting for us as we came down from the dune, we drove onward to Sossuvlei, where we were going to climb more dunes.

Mambo was a great guide. It seemed that there wasn’t an animal, bird, or geologic formation that he couldn’t tell you about, and in a real way. He didn’t just name a bird, for instance, he would tell you what it ate, whether it was a year-round resident or migratory, how it nested, and more. I asked where he had learned all of this because I was very impressed. It turned out that he has a university degree in biology, and ten years of experience leading these tours all over Africa. An amazing young man.

Mambo always sat in the rear seat of the bus, and when rotation brought me to the seat next to him or in front of him, we had great conversations about African history. I was happy to listen because African history was barely touched on in my schools, plus, being Kenyan, his perspective was much different than anything I read in my history books, which were mainly written by American or English authors.

As we all got to know each other better, we learned from each other, too. One young man from England asked me, as part of the conversation around the card table, if U.S. was ever a Commonwealth country. I said, no, we took care of that in 1776. After that, England did not invite us to join.

I started learning a few words in Swahili, which is spoken in Kenya and other places. I started by asking how to say, “Good morning.” Henry and Mambo taught me “Nyadzi.” Mambo said it translates roughly as “What’s up, how are you?” I don’t know where I picked up “my brother,” but it is “ka-ka.” “My sister” is “da-da.” Kenyans – at least Mambo, Henry, and John – often refer to each other as “my sister” or “my brother,” much the same way as Arabs say “my friend.” “Boa” is the “I’m good” response to nyadzi. When Mambo was reciting the numbers 1 – 10 in Swahili for Margie, I commented that the numbers were the same name as in Arabic. Mambo explained that the Arabs traded with the Kenyan tribes, and so there were a lot of Arabic words that were absorbed into Swahili. Given the Arabs’ history with mathematics, it’s not surprising that the numbers would have been derived from Arabic. He was surprised to learn that many Native American words were absorbed into American English, especially animal names, since there were many that were not found in Europe.

Sossuvlei is a salt and clay pan surrounded by large reddish dunes. The red color is because of the iron content in the sand and the subsequent oxidation effect. These pans are very occasionally flooded by an ephemeral river, a river that is dry most of the time, but every few years, it has collected enough water to reach the pan. It is an endorheic drainage basin, i.e. there is no outflow to the ocean or anywhere else, it stops here. Some of the dunes are stable enough to have plants growing on them.

A more colorful description calls Sossuvlei a “sand sea” comprised of huge red dunes, some of which are almost a thousand feet tall and span twenty miles, possibly the largest in the world, competing with the Badain Jaran Desert dunes in China. The dunes are an impressive sight.

From Sossuvlei, we set off for the bush camp.