My last day trip was a visit to the wineries around Cape Town. I spent the last ten years before I retired living in the Finger Lakes area of New York State. New York State is the third largest producer of wine in the United States, following California and Washington States. I had heard much about the South African wines, so I was curious to try them.

The trip took a little while to get out of Cape Town’s traffic, but we finally reached the beautiful countryside estates where the wineries established themselves.

Backsberg Estate Cellars was our first stop. Backsberg was founded here in 1916, and during their 100+ year history, they have developed sustainable farming techniques for their vineyards. 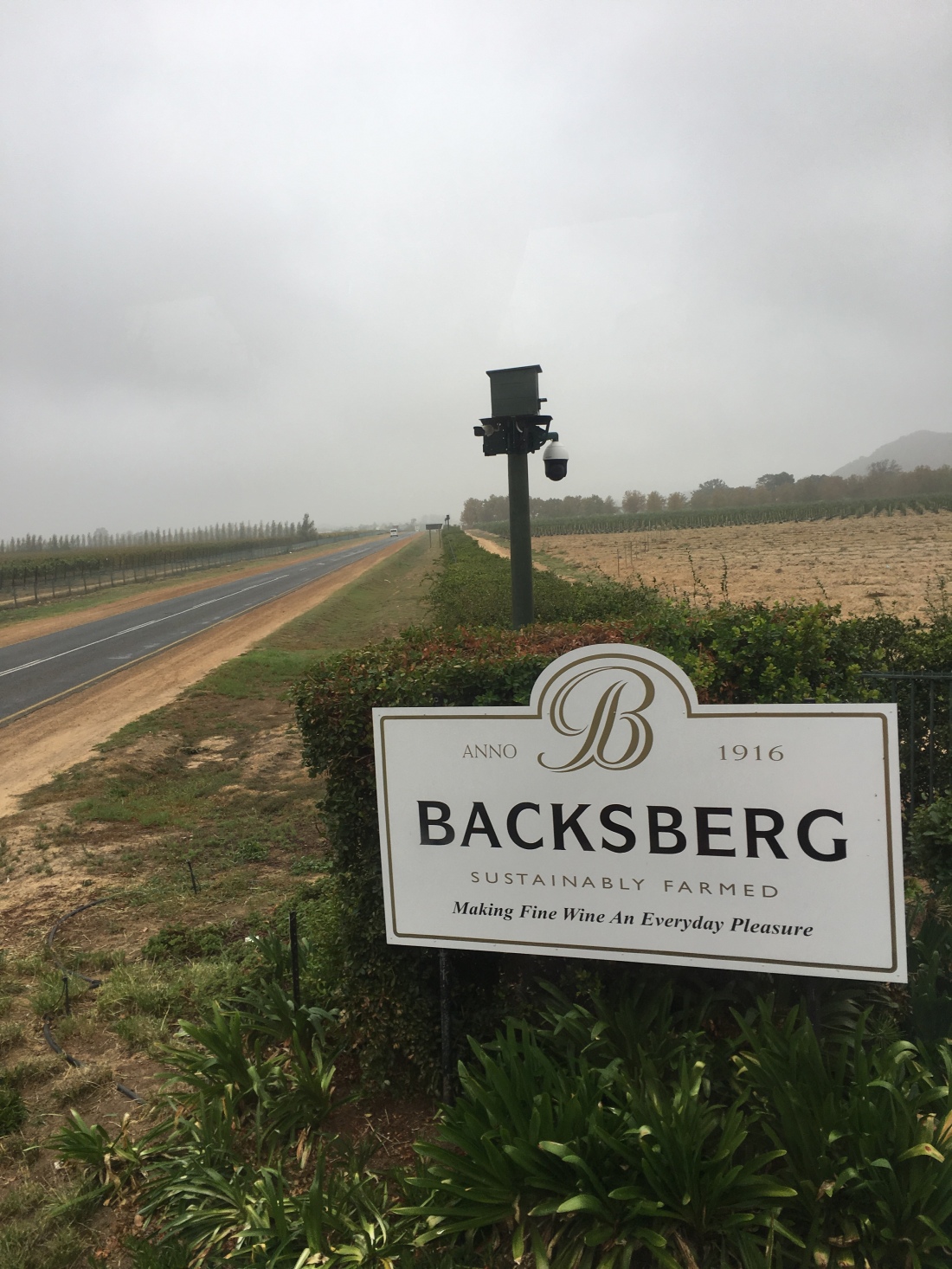 In the tour of their facilities, we learned that the oak barrels that they use are from France. They are used to impart the oak flavor to some of their wines as they age. 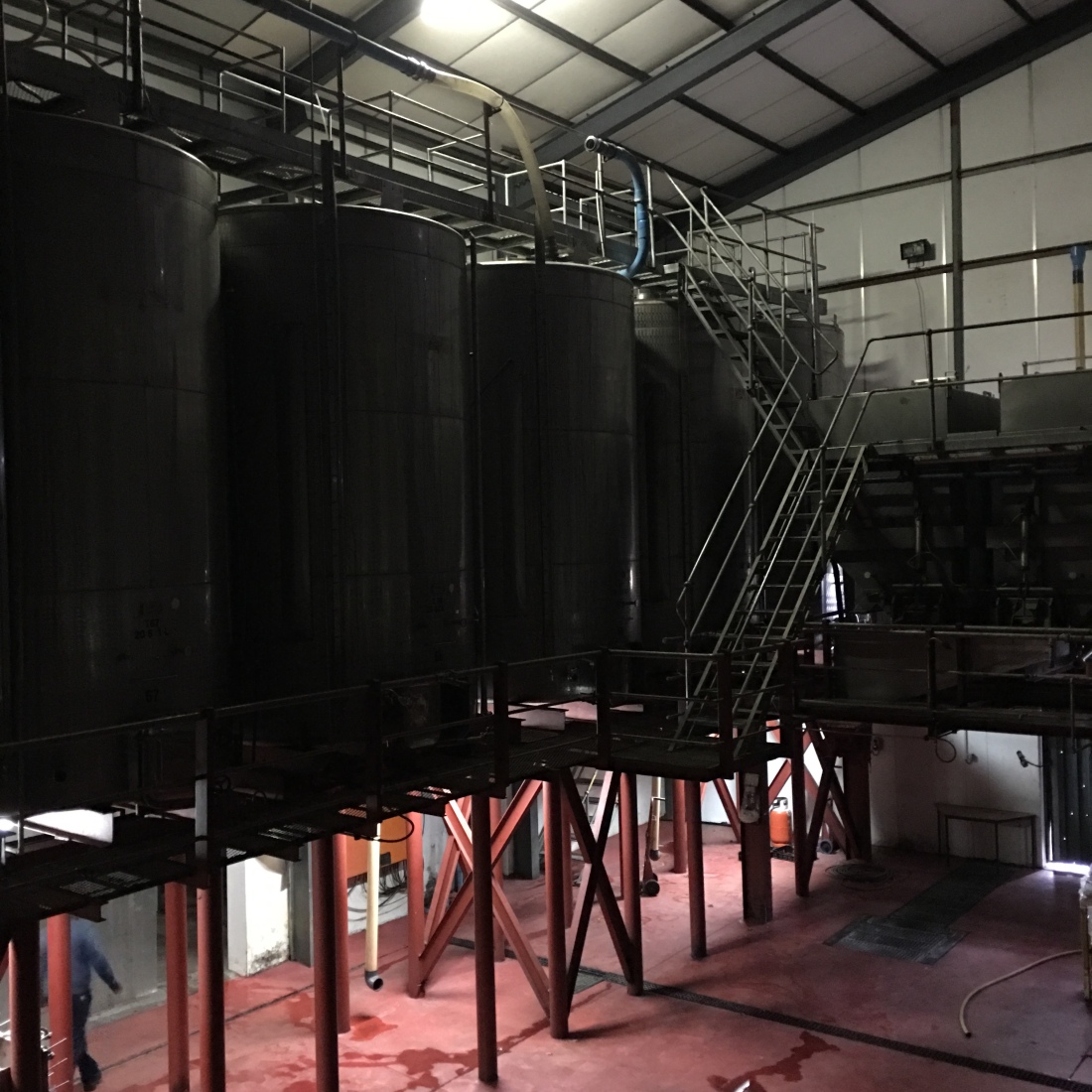 We had a lovely tasting at a table set in one of their cellars. The wines were quite flavorful, and I would have bought a couple of their reds (I prefer reds,) but it gets heavy in the backpack…and I don’t mean my daypack. 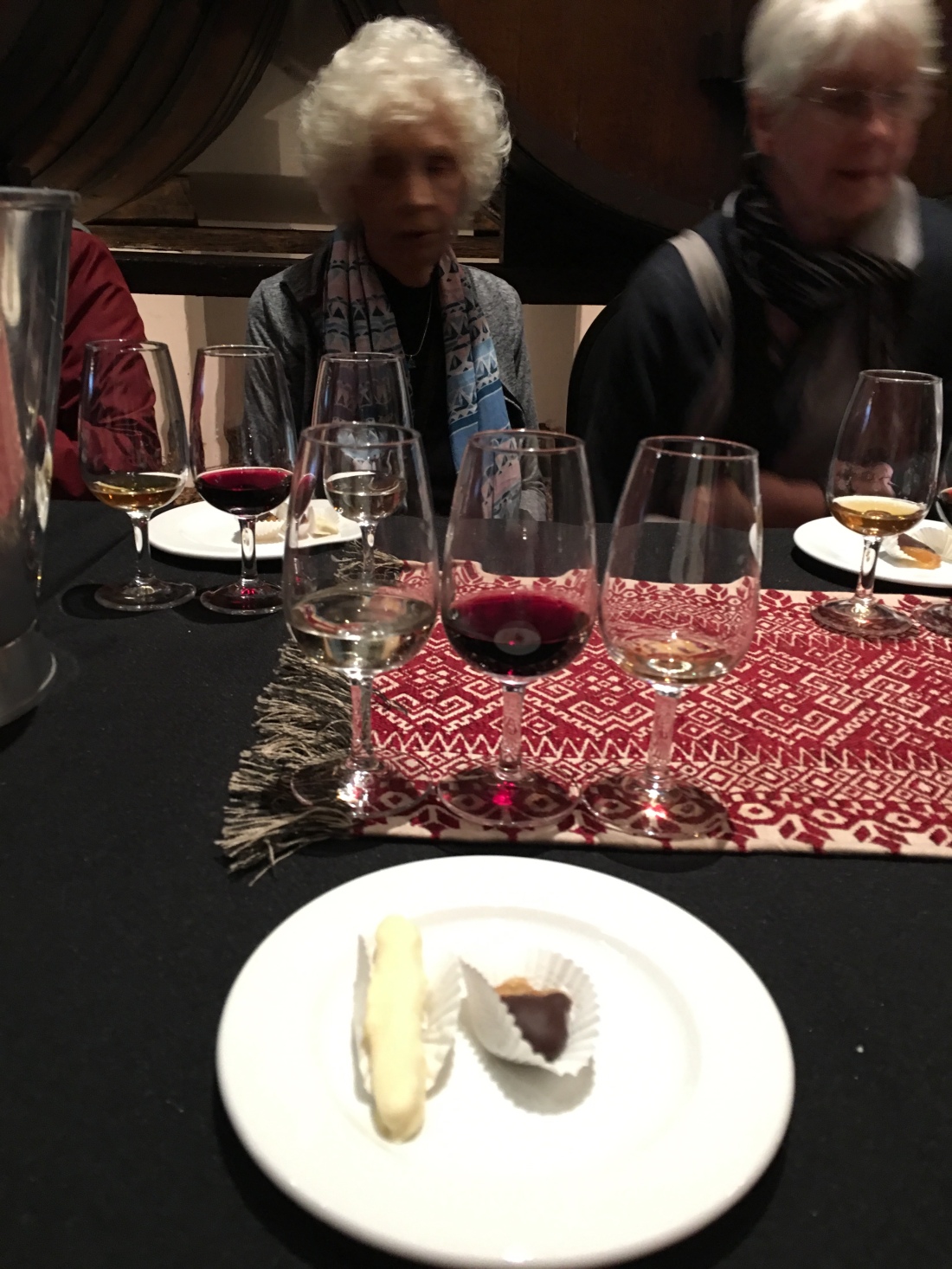 I enjoyed their garden as well, and spent some time thinking about what my garden will look like when I settle down again.

From Backsberg we moved on to Stellenbosch, the village center of the district, where we were turned loose to have lunch at the many cafes and restaurants, and enjoy the art galleries, craft shops, and other specialty shops until time to re-board and travel on. I had lunch at a place called Reuben’s, which I learned is one of two or three Reuben’s in South Africa. I had the seafood special of the day and a butter lettuce salad with roasted pears: (That’s water in my glass, by the way.) 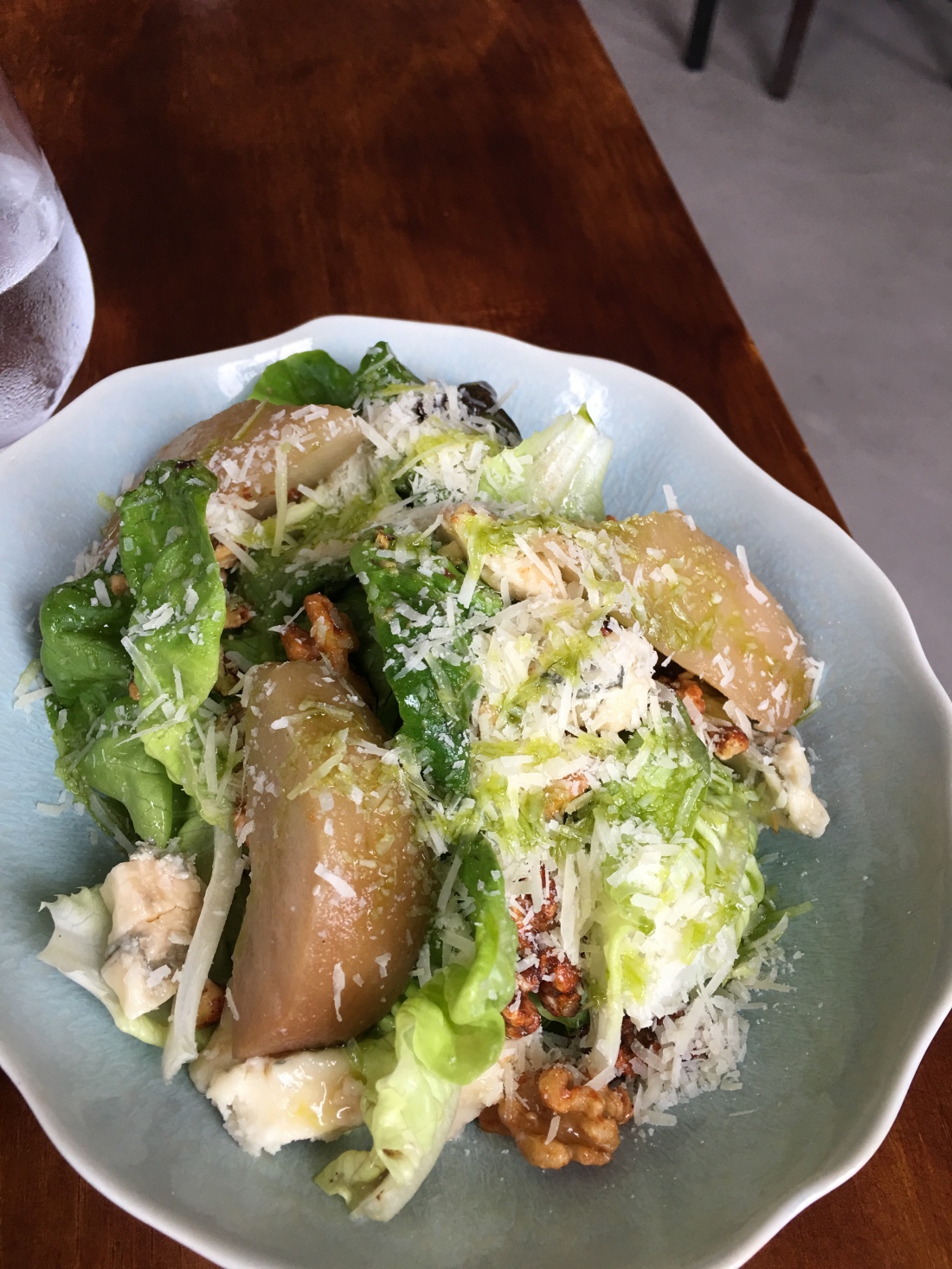 The next winery was called Vergenoegd Wine Estate. We again toured the facilities, and then had a tasting on their patio. The wines were excellent, but again, I was restrained by my back imagining carrying full bottles in my backpack. 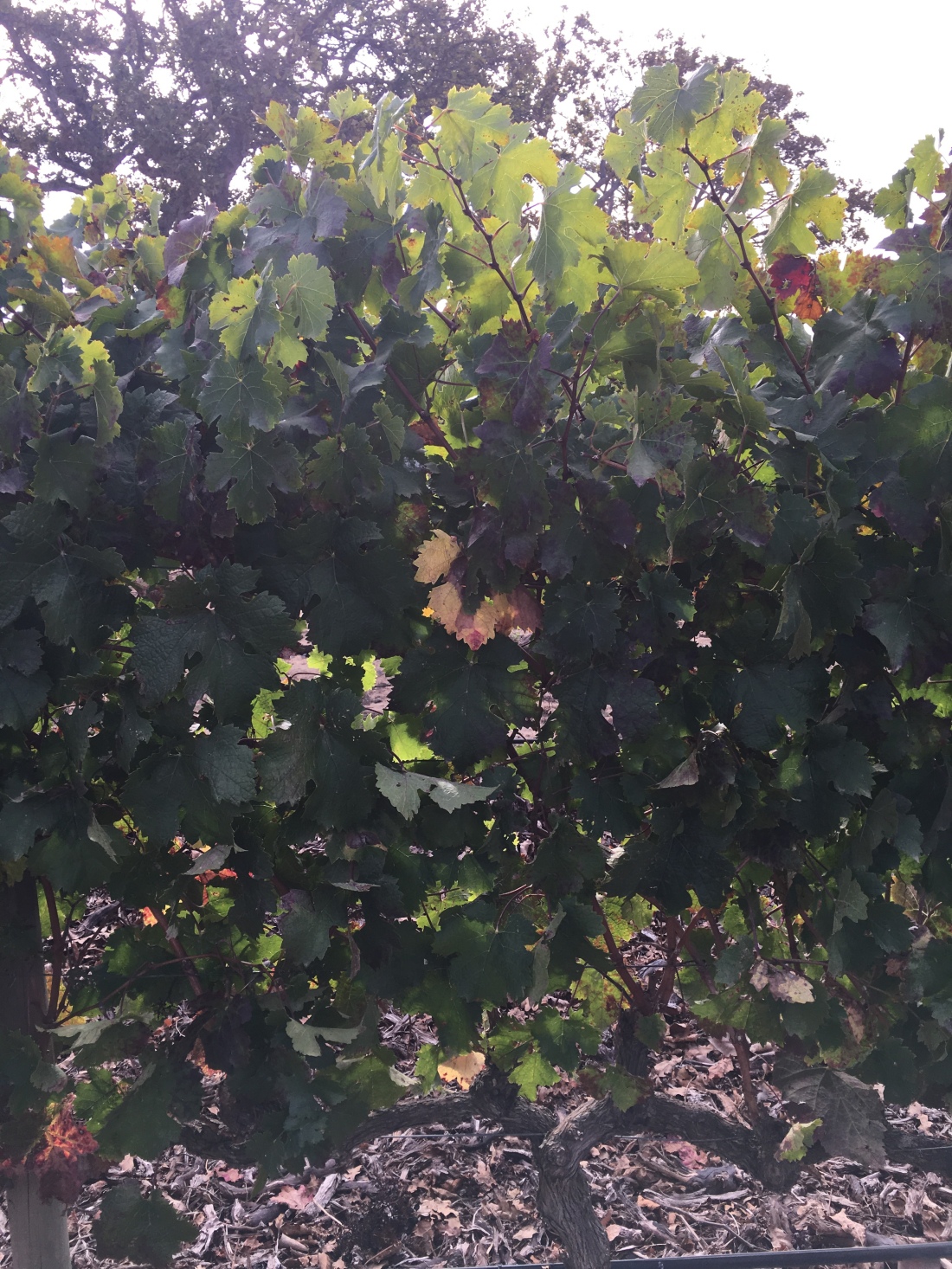 The most unique part of Vergenoegd, however, was their “Duck Parade.” Part of their earth-friendly approach to farming is to use runner ducks to control the insects, slugs, and weeds in their vineyards. They have a couple hundred ducks that help out. They live outdoors during the day when the staff can watch out for predators, but they are guided to their shelter for the night at the end of the day for their protection.

You can’t help but love them, they are so darned cute as they march in for the night! 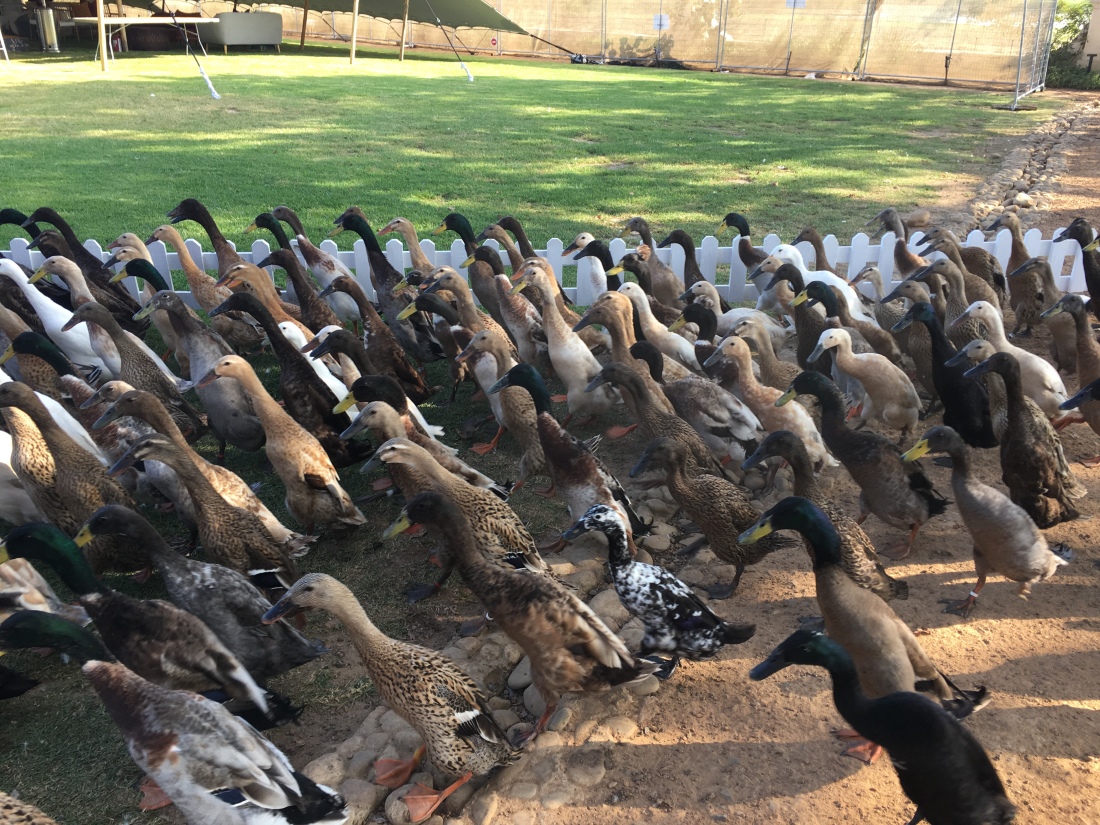 After the Duck Parade, the guide gathered us up, and we headed for “home,” too – back to Cape Town for the evening.