The Robben Island ferry returned us to the Victoria & Alfred Waterfront, where I proceeded to the Zeitz Museum of Contemporary African Art. Krista, a young woman I met on the Robben Island ferry, was also headed there, so in the tradition of travelers, we went on together.

The MOCAA, as it is called locally, is comprised mainly of a collection of modern African art that was collected by Jochen Zeitz, a German businessman and resident of South Africa. Zeitz also underwrites the operation costs of the museum and an undisclosed amount for acquisitions.

Even though my knowledge of modern African art is very limited, I enjoyed the humor and technical skill in the variety of works on display. 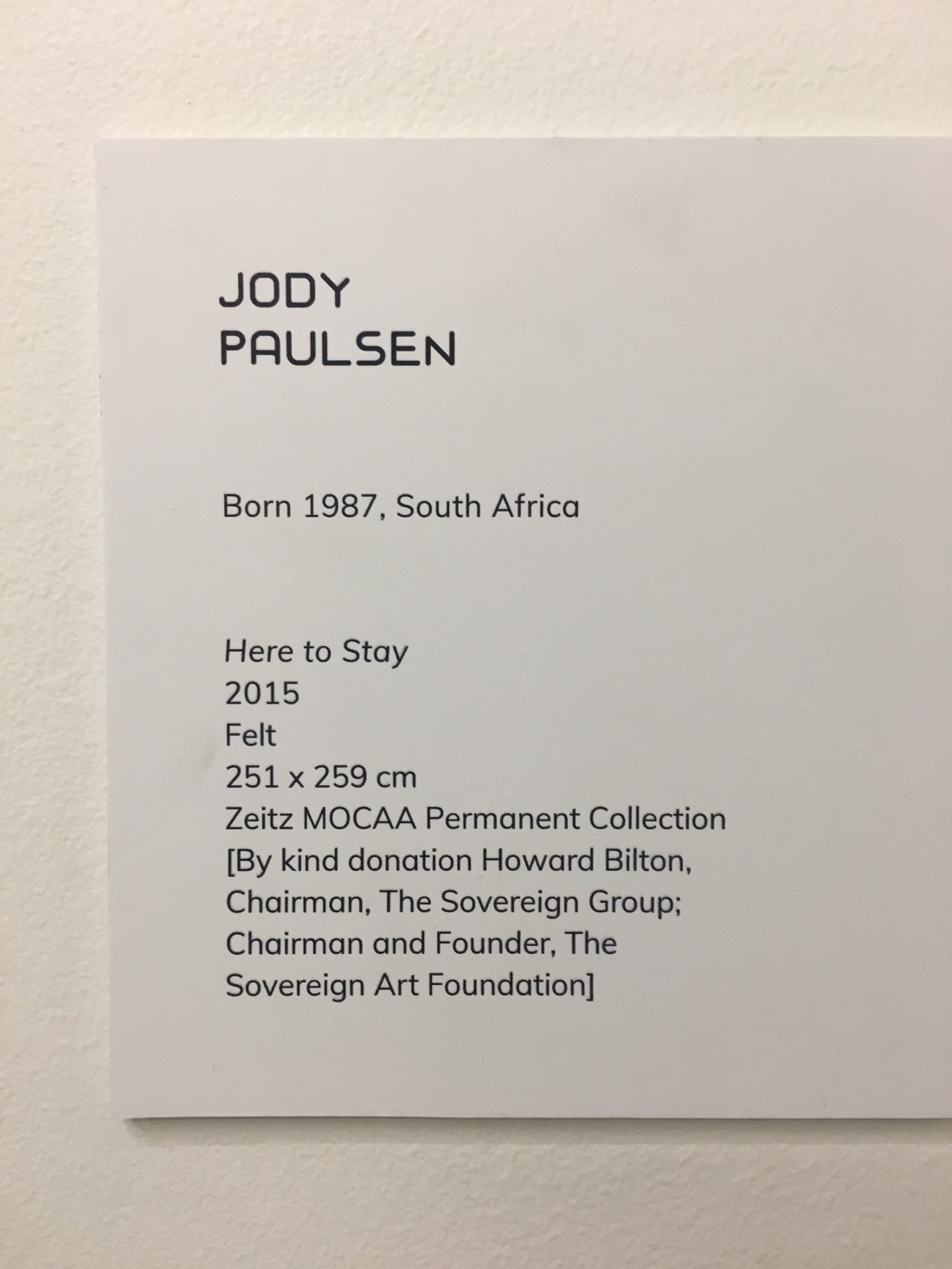 The next one is my hands-down favorite. The photos hardly do it justice, I’m afraid. There was sound, music blaring from the four megaphones, and the images moved across the screen, which was about nine feet tall, and began on the left wall, turned onto a very wide center wall, and then to the right wall, where the figures exited when they reached the edge. 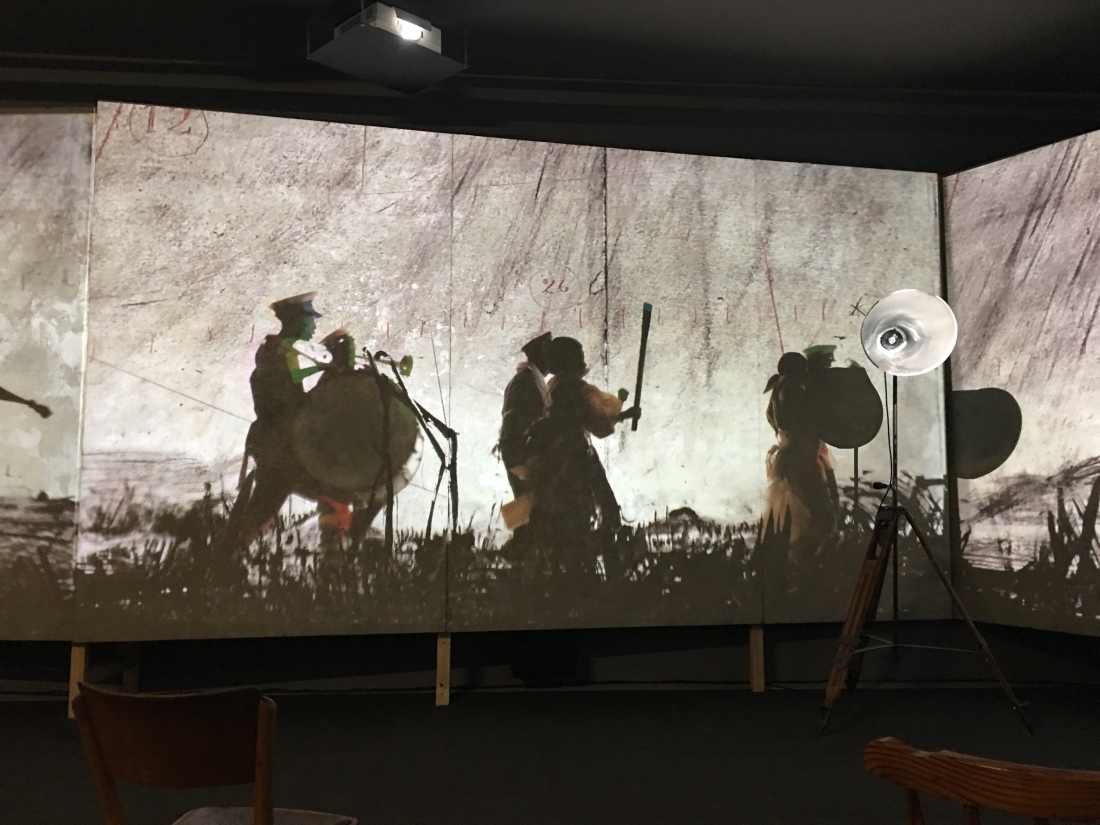 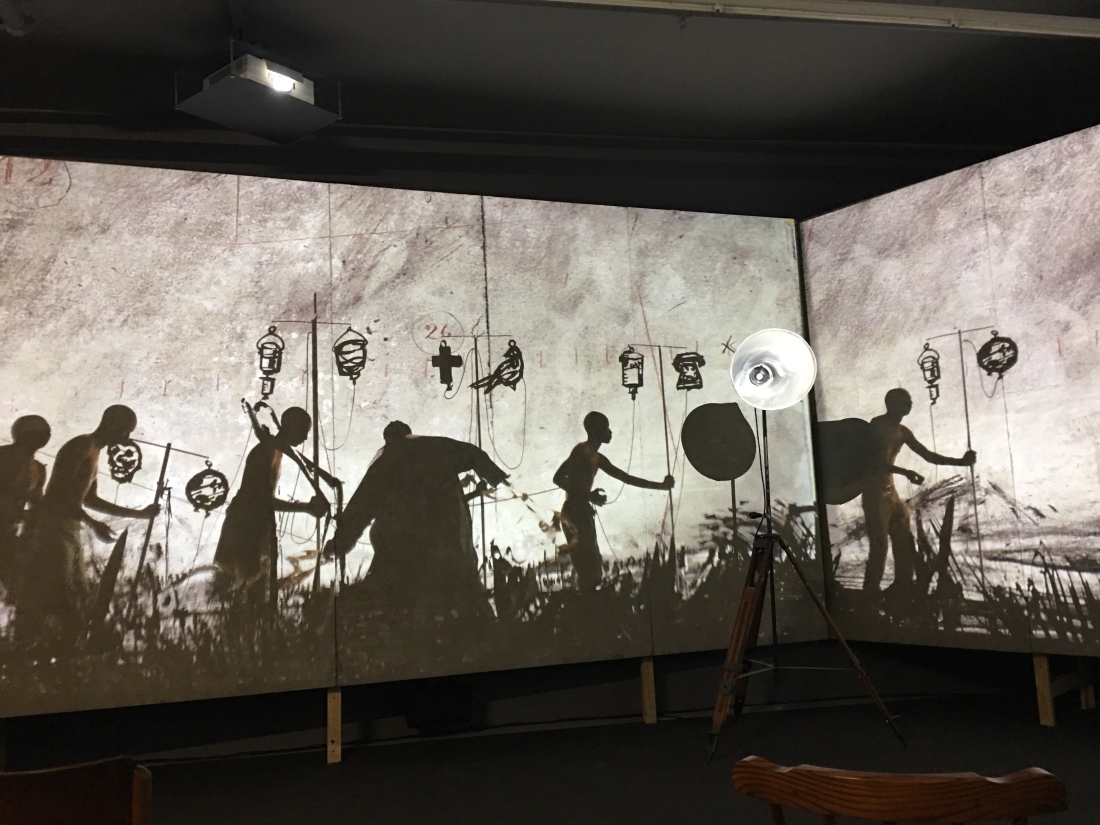 Almost as interesting as the art was the building, a renovated grain silo, built originally in 1921 and used for storing and shipping grain until 2001. Heathwick Studio was the architectural firm hired to do the renovation.

They used various concrete-cutting techniques, carving out the interior of the building to create the galleries and a large central atrium. Concrete shafts were capped with strong thermal glass to allow natural light to enter. “Pillowed” glass panels in the upper floors added light to the interior and texture to the facades of the building. There are nine floors with 6,000 sq meters of exhibition space, one floor is dedicated educational space, and there is a sculpture garden on the lower part of the roof. A restaurant serves the museum and the Silo Hotel that occupies the upper floors. The building and museum opened in 2017. 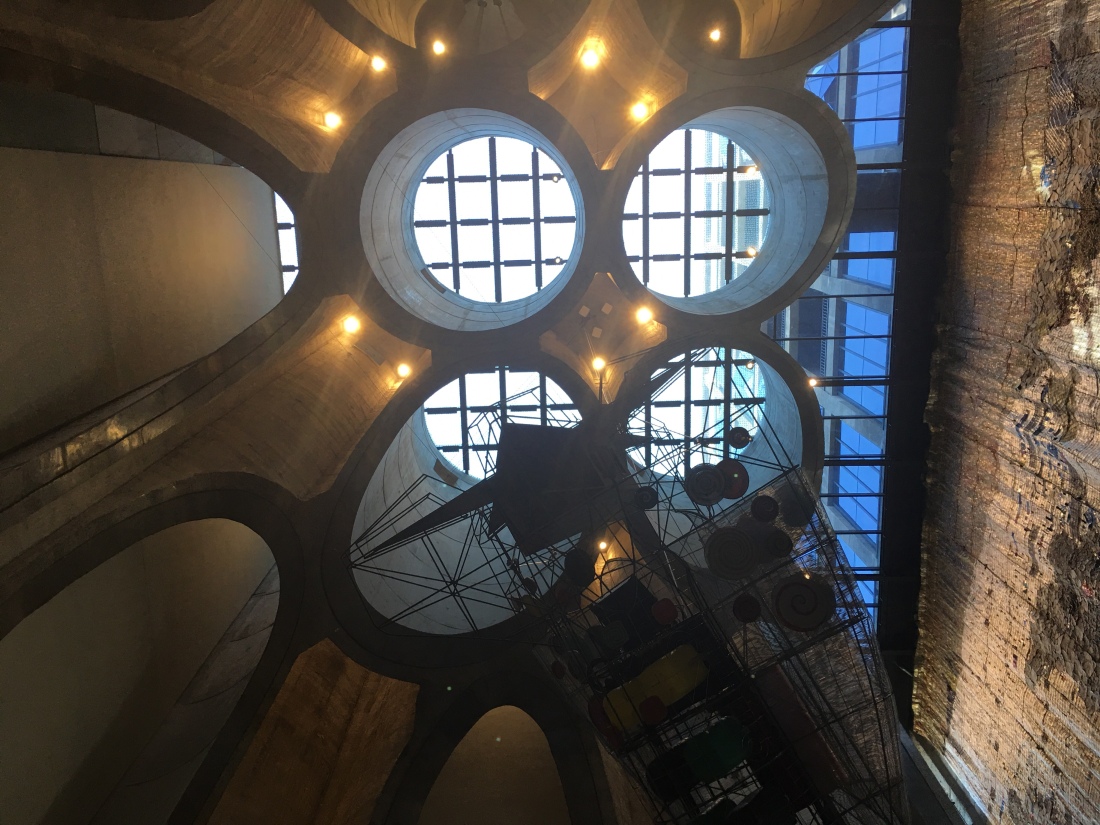 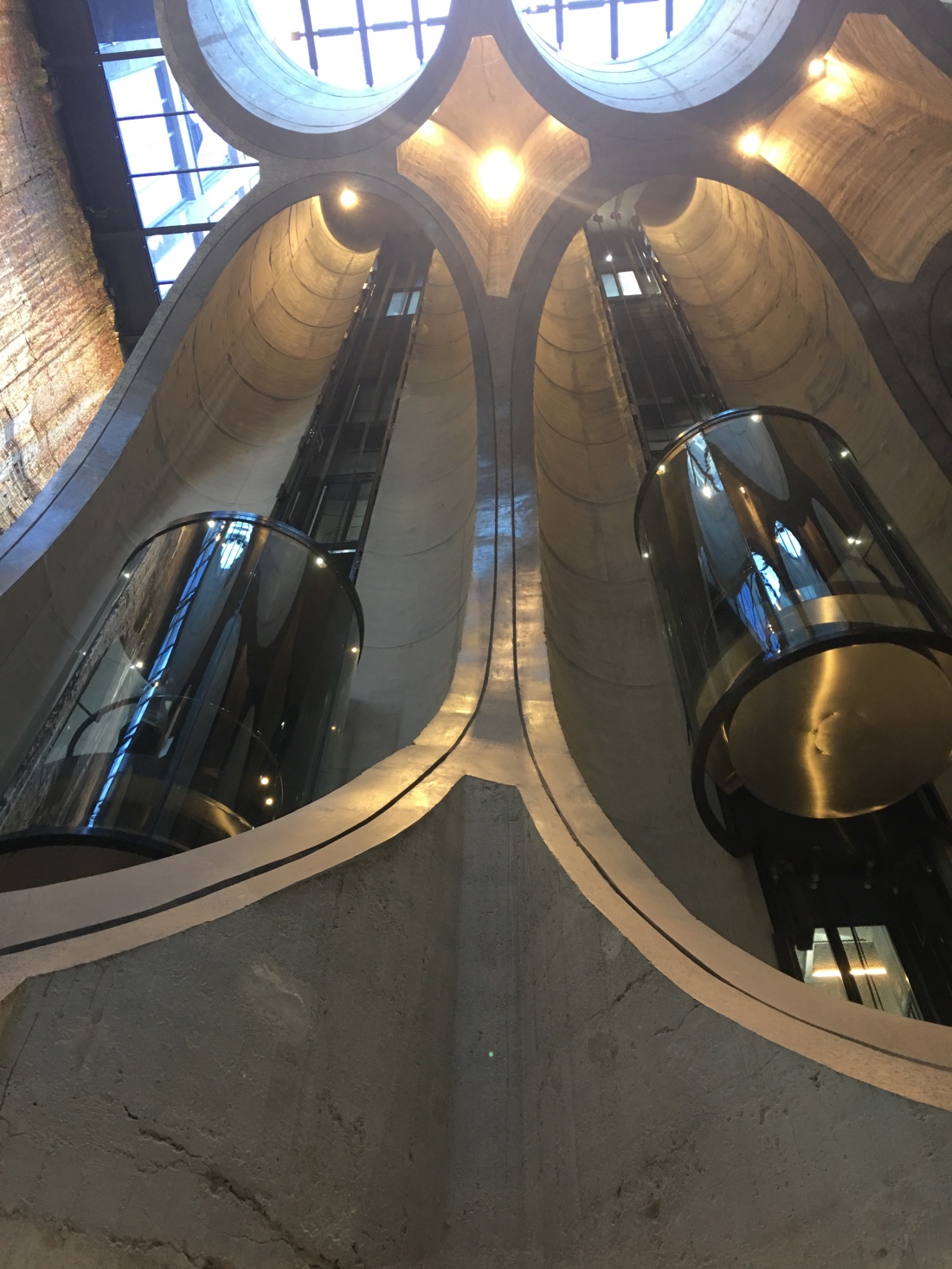 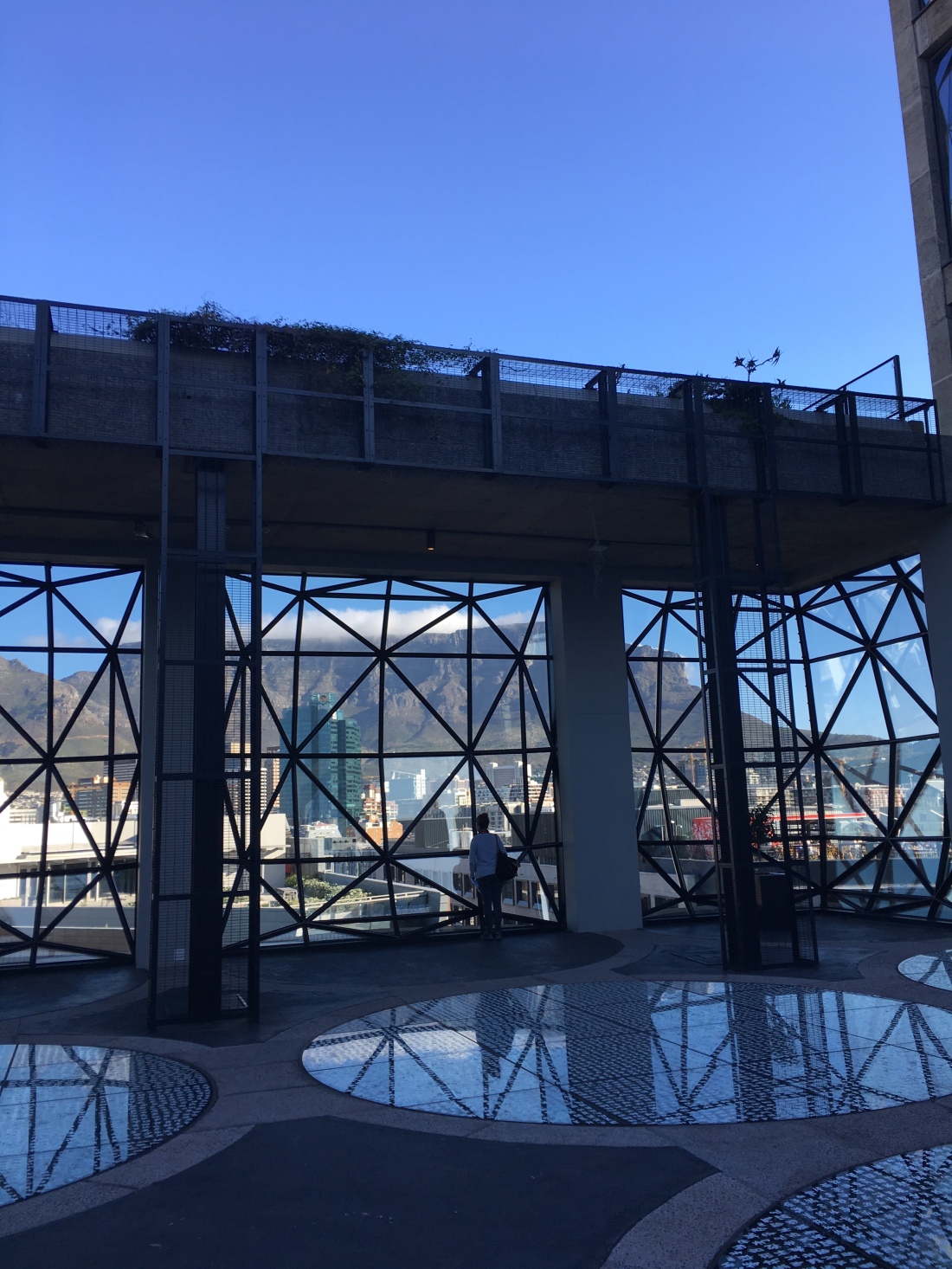