On Friday, April 5th, the sun promised a beautiful day and I was ready to explore more of Cape Town than my balcony and the Woolworths.

The Victoria & Alfred Waterfront is a jumble of attractions, tour offerings, shops, and restaurants. Paths lead in multiple directions with few, if any, straight lines. If you are wondering if you remember Queen Victoria and her husband correctly, you are not alone. Victoria was married to Prince Albert. Alfred is her son, and the basins that make up the V&A Waterfront are named for Victoria and Alfred, not Victoria and Albert.

Table Mountain dominates the skyline. As the name suggests, the top of the mountain is flat. When it is covered by clouds, as it was this morning, the locals say the mountain “has its table cloth on.” Or, perhaps you prefer the legend of the retired pirate who was challenged to a smoking match by the Devil. The pirate out-smoked the Devil, but the Devil sometimes demands a rematch, and the mountain is covered with their smoke. 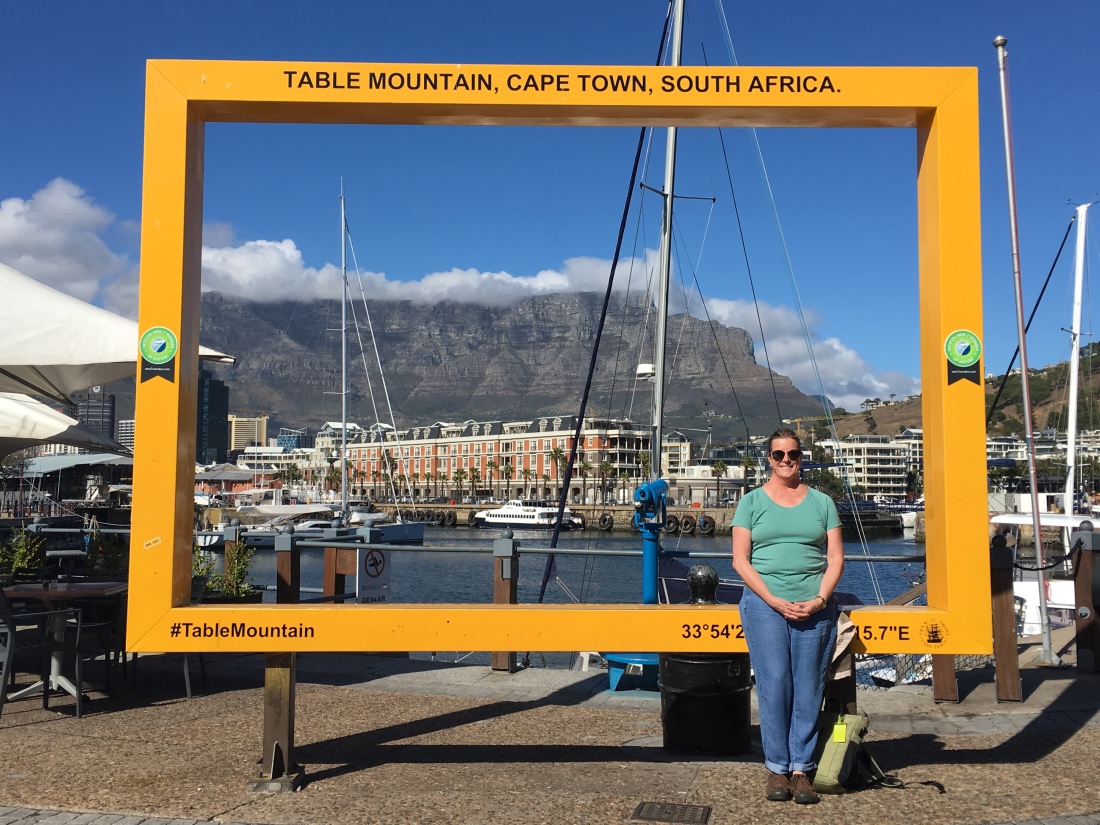 People were already queuing for the Ring:

Shops were open, selling everything from children’s clothing to art work for your empty living room or yard:

Robben Island is located just outside of the harbor, across a short, turbulent part of the Atlantic Ocean, is best known as the prison home of Nelson Mandela, but that is only the latest iteration. “Robben” is the Dutch word for seals, and seals dominated the island when the Dutch first arrived. It held political prisoners in the 1600s, when the area was governed by the Dutch, it was a leper colony for about 80 years during the 1800s, and during WWII it was a naval base to protect the Cape, which has always been a strategic route between the Atlantic and the Indian Oceans.

I had a reservation for the Robben Island tour at 11 a.m. There is a regular ferry that leaves from the Victoria & Albert Waterfront about four times a day. It’s easiest to book the trip online in advance, but tours may be cancelled due to rough water. Robben Island lies in open water, and the water between the harbor and the island becomes very rough in strong winds. I went on the 11:00 a.m. sailing (the 9:00 a.m. was sold out,) and it turned out to be the last one that day.

The trip to the island is about twenty minutes, and unremarkable except for the occasional spotting of sea life. This morning, we saw some dolphins playing in the wake of the boat.

On landing at the island, we were loaded onto buses for our tour around the island. The island is also unremarkable except for its history and the guides that tell you about it – they are men who were involved in the anti-apartheid movement.

The young woman who sat next to me on the ferry (who turned out to be from North Carolina) and I were seated at the back of the bus, which seemed appropriate to the topic. 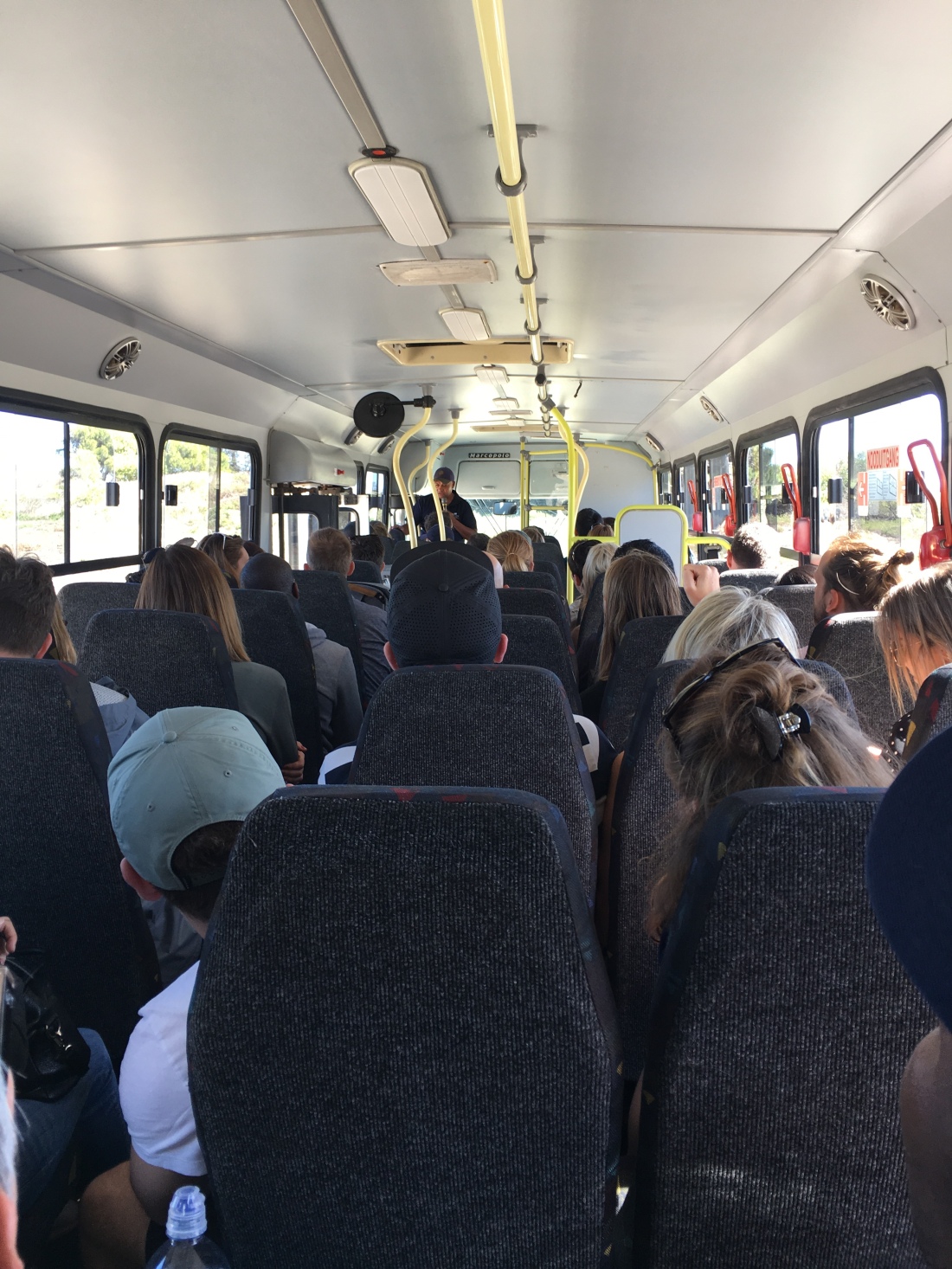 Unfortunately, it also made it difficult for me to hear, but I caught up with him when we stopped for a break (the entire tour, including ferry rides, is about four hours.)

As we went around the island, he was telling us about the anti-apartheid movement as exemplified by the story of Robert Sobukwe, a well-known activist of the time. Like many, Sobukwe was arrested and imprisoned. What set him apart was that the apartheid government was so fearful of his influence, that when it came near to the time Sobukwe would be released, they passed a law that was specific to Sobukwe, despite the generalized wording. It allowed the government to re-arrest and imprison Sobukwe immediately on his release, and there he stayed for several more years.

Our guide described the hard labor that punished the political prisoners, working in the limestone quarry, whereas other prisoners had “soft labor,” such as working at maintenance tasks.

In between, there were scenes of a semi-normal life: a church, a mosque, a school, and some residences, all left over from the leper colony and other segregations, such as indigenous people.

The maximum security area and solitary confinement areas were where most of the political prisoners, including Nelson Mandela, were held. It was unsurprisingly stark. The cells were basic. The yard where they were allowed to exercise was small and equally stark, although there was garden space there, which was used by Mandela. The guides here were men who had served time, measured in years, in the maximum security area. Our guide: 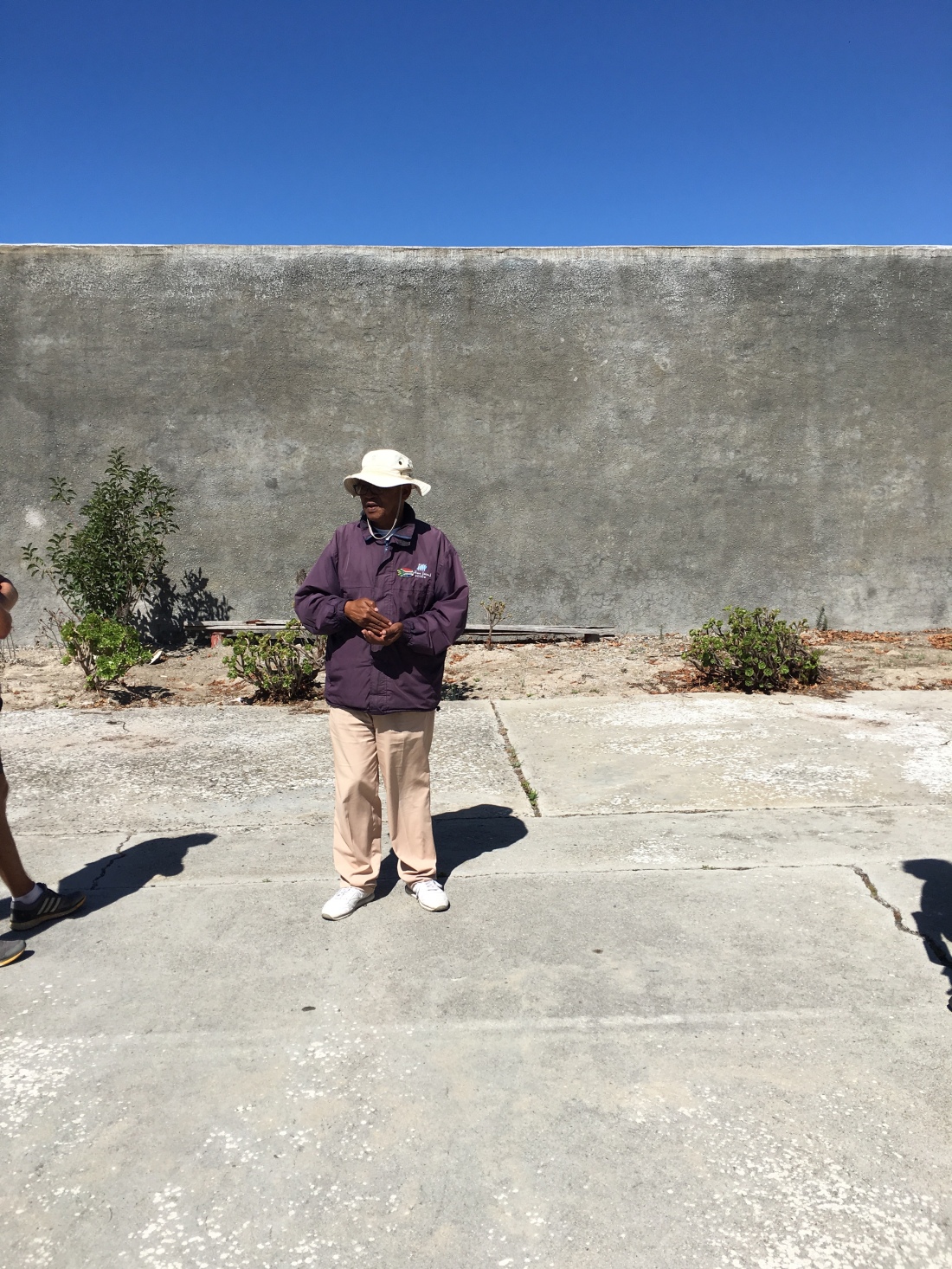 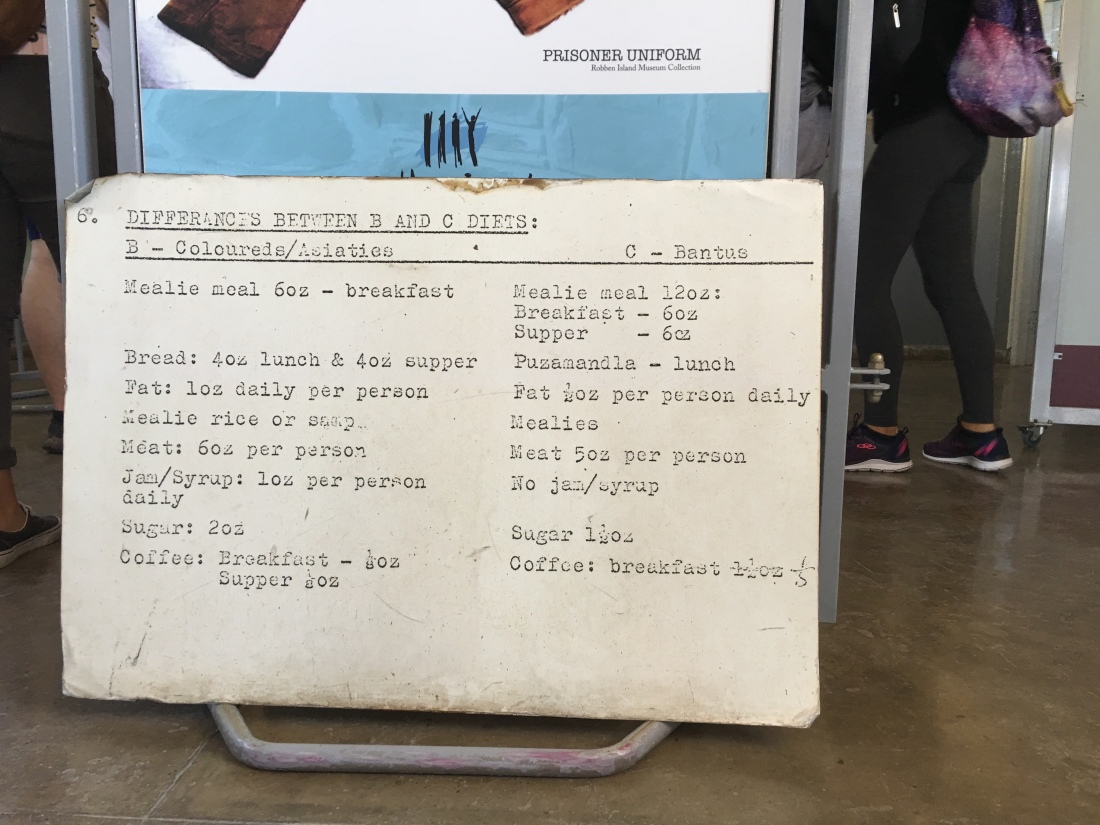 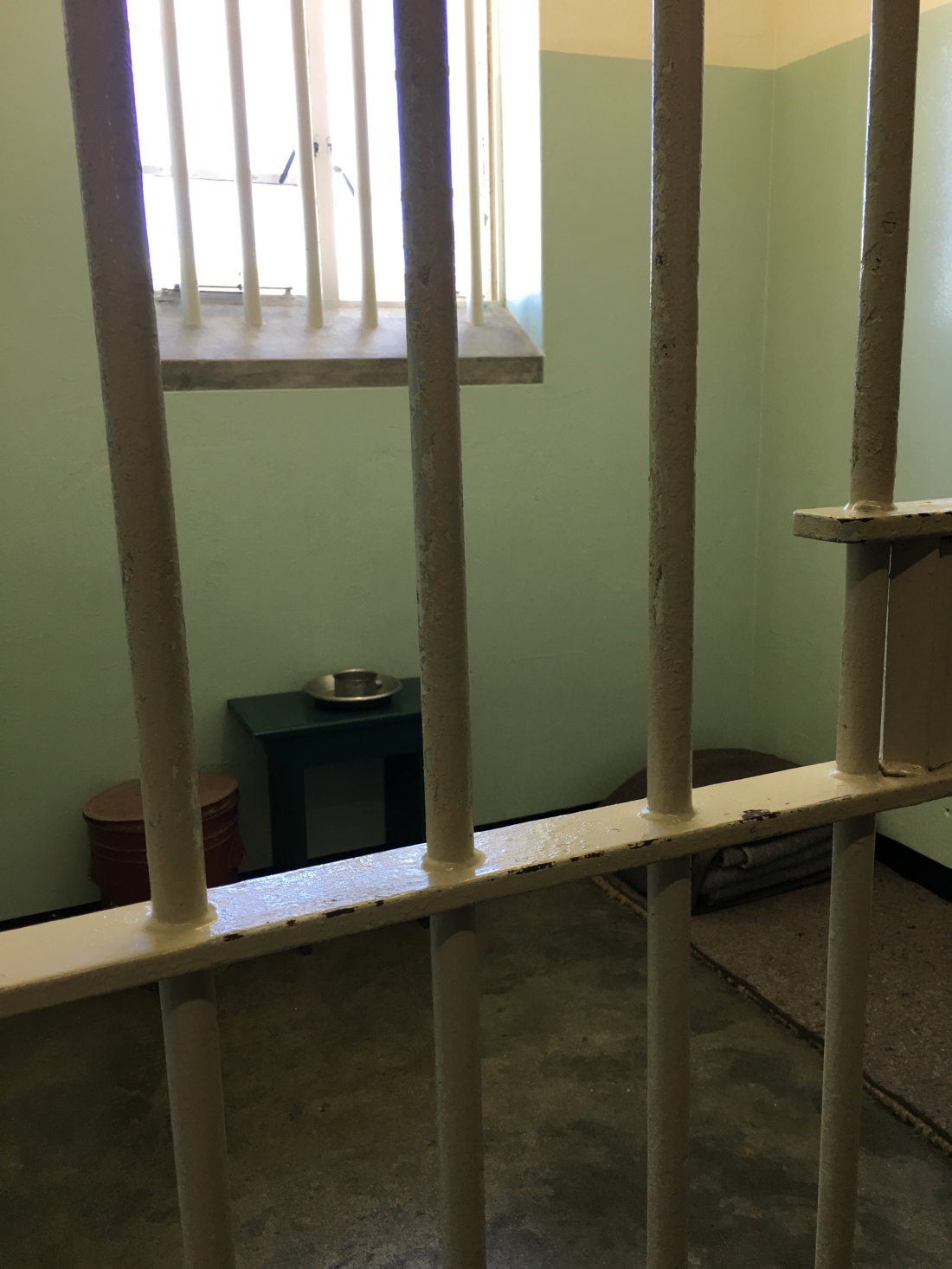 Above, the cell of Nelson Mandela, where he lived from 1964 to 1982, in solitary confinement, until he was transferred to another facility to receive medical care. Authorities had figured out that it would be bad if Mandela died while in their custody. 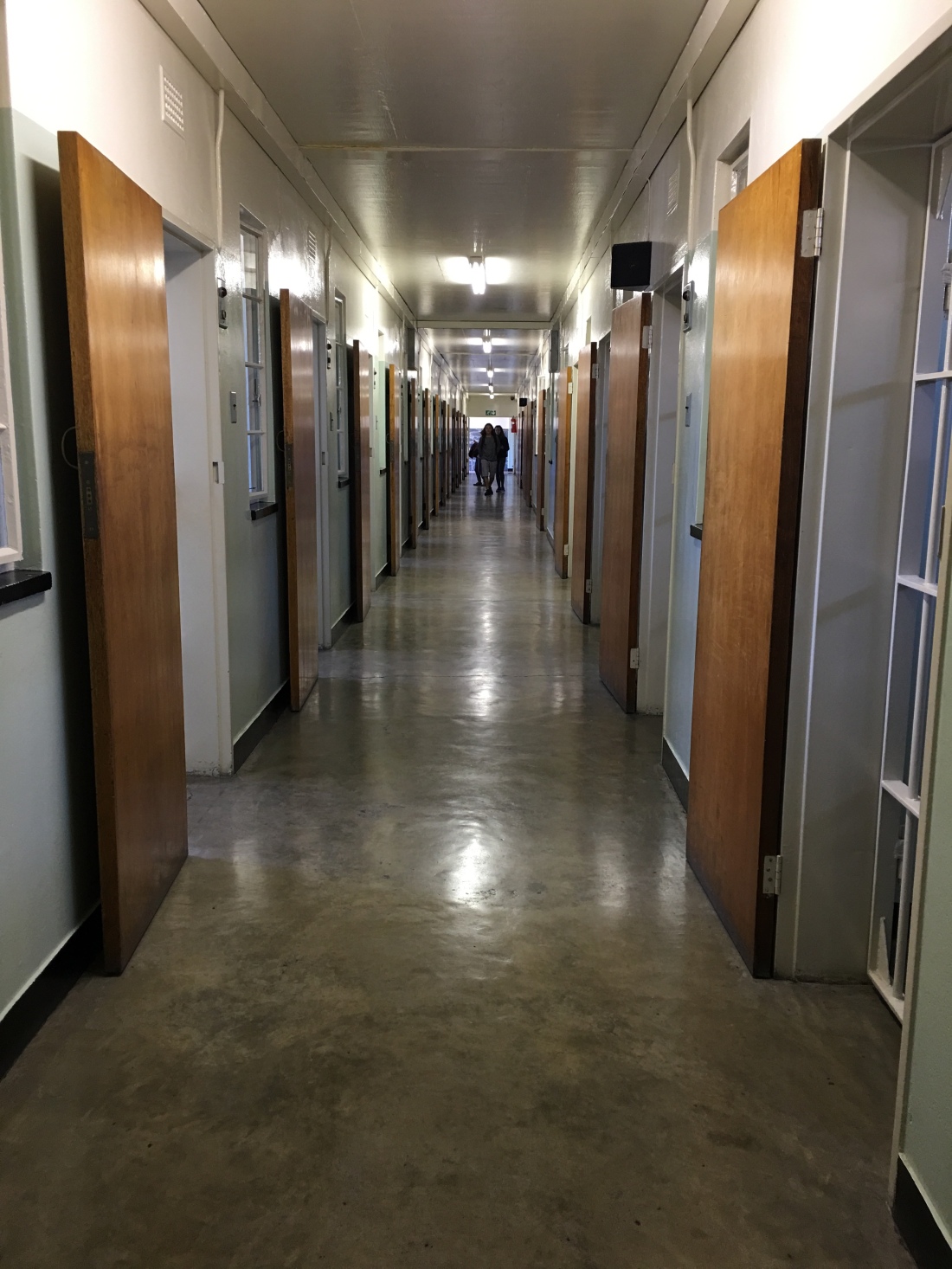 Corridor in the maximum security building.

The view of Table Mountain from the area across from the school:

Escapes from Robben Island were rare, and there have been only four successful escapes (meaning they lived) recorded during Robben Island’s history. The currents, the water temperature, and the distance were all powerful obstacles, but escape by water was the only way.