We began our visit to Santa Fe at the central Santa Fe Plaza, which is bordered by artisans selling their crafts, shops filled with Western clothing (some hand made,) galleries of paintings, sculptures, and jewelry, and restaurants. Santa Fe is filled with interesting food – Santa Fe’s history and heritage is reflected in the traditional and “Nuevo” Mexican cuisine. Restaurants mix the Spanish, Mexican, and Native American influences, along with traditional American food, so there’s something for everyone on most menus.

The Plaza has a monument in its center, commemorating soldiers who fought in the Civil War (there was brief fighting in Santa Fe,) people who fought the Indians, the city’s founders, and others. As I looked at the monument, I noticed that a few words had been obliterated by neat cuts in the stone, very deliberately removed. On the fourth side, I found this plaque: 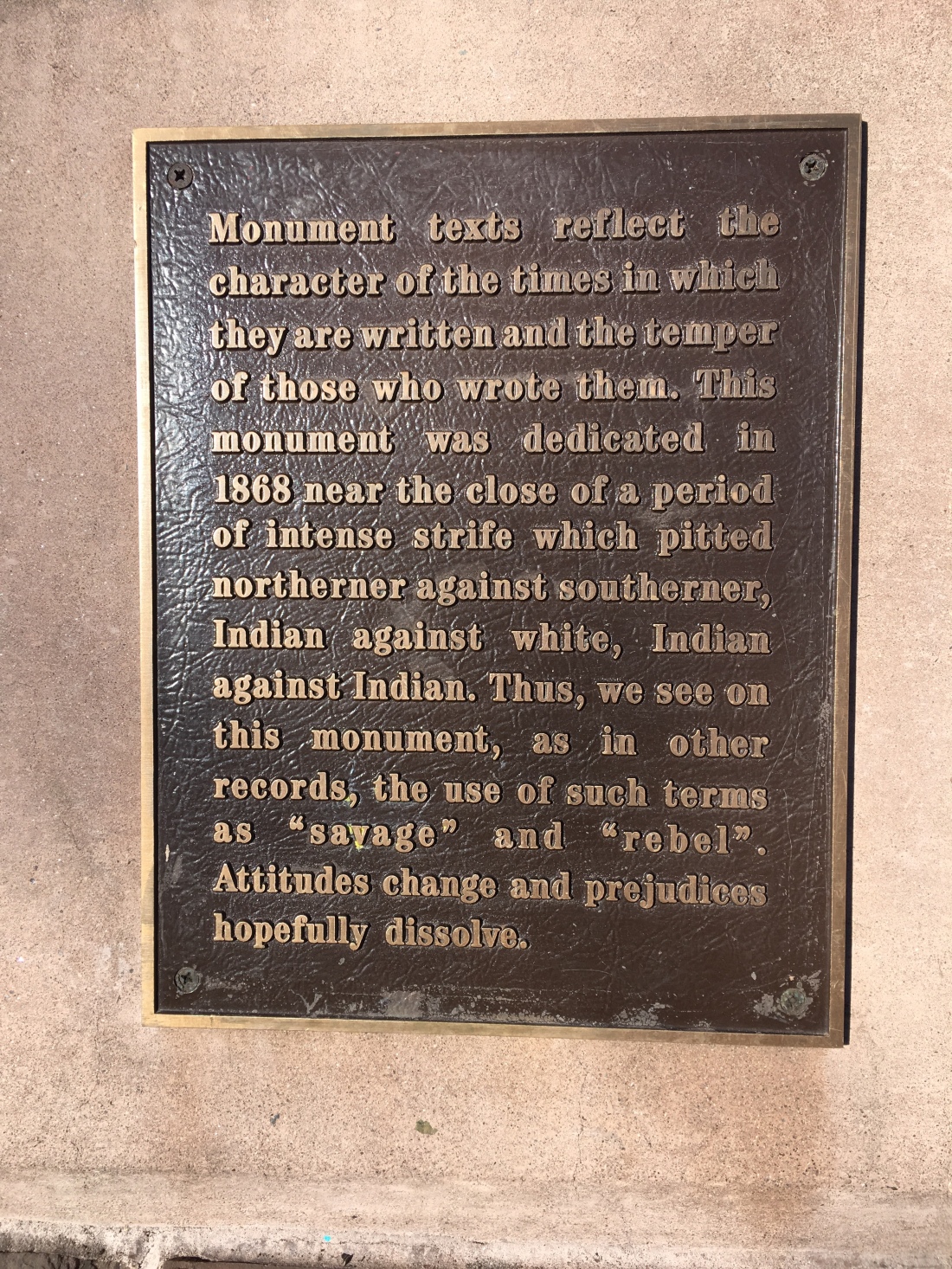 The art ranges from quirky — 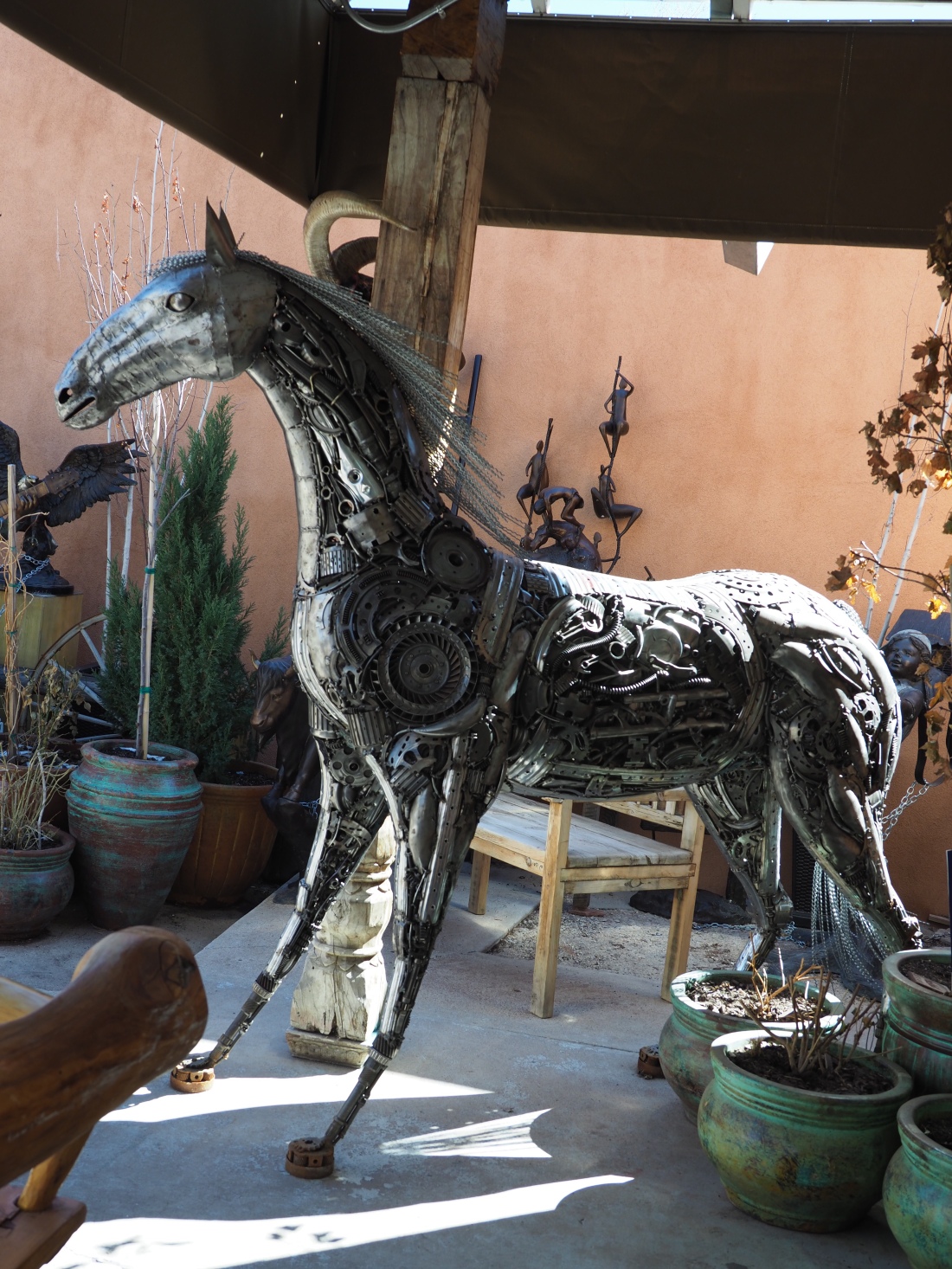 If you wish to channel Georgia O’Keefe, there’s a shop for that:

The Lensic Performing Arts Center has a beautiful building and an active calendar. They can be found at lensic.org. 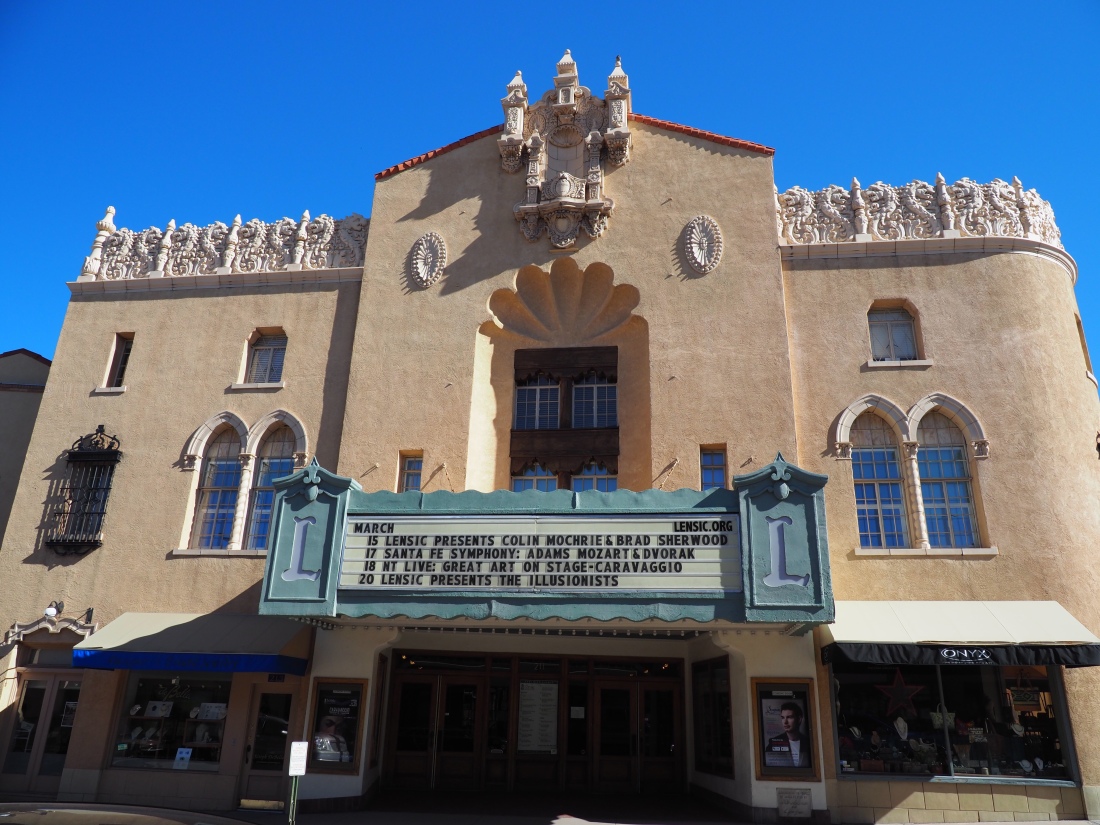 The Cathedral Basilica of Saint Francis of Assisi stands a block away from the Plaza.

Spanish priests entered the now New Mexico area in 1598. After the City of Santa Fe was officially established in 1610, the first adobe church was built on this site. The original church was burned during the Pueblo Indian Revolt, re-built when the colonists returned, then replaced by a larger adobe church that was badly damaged by rain, and substantially rebuilt and enlarged again in the early 1800s.

After the arrival of Jean Baptiste Lamy in 1851 to serve the new Vicariate, dedicated to St. Francis of Assisi, and the elevation of the Vicariate to a diocese in 1853, a new cathedral of stone was built, designed mainly in the French Romanesque style. It was begun in 1869, when the cornerstone was laid, and was consecrated in 1895. The final structure incorporates Our Lady’s Chapel on the north side, which was part of the 1714 mission-style adobe church, the main Romanesque cathedral, and the modern south transept and Blessed Sacrament Chapel next to it, added in 1967 and 1986, respectively.

Our Lady’s Chapel, which would be to the left in the photo above: 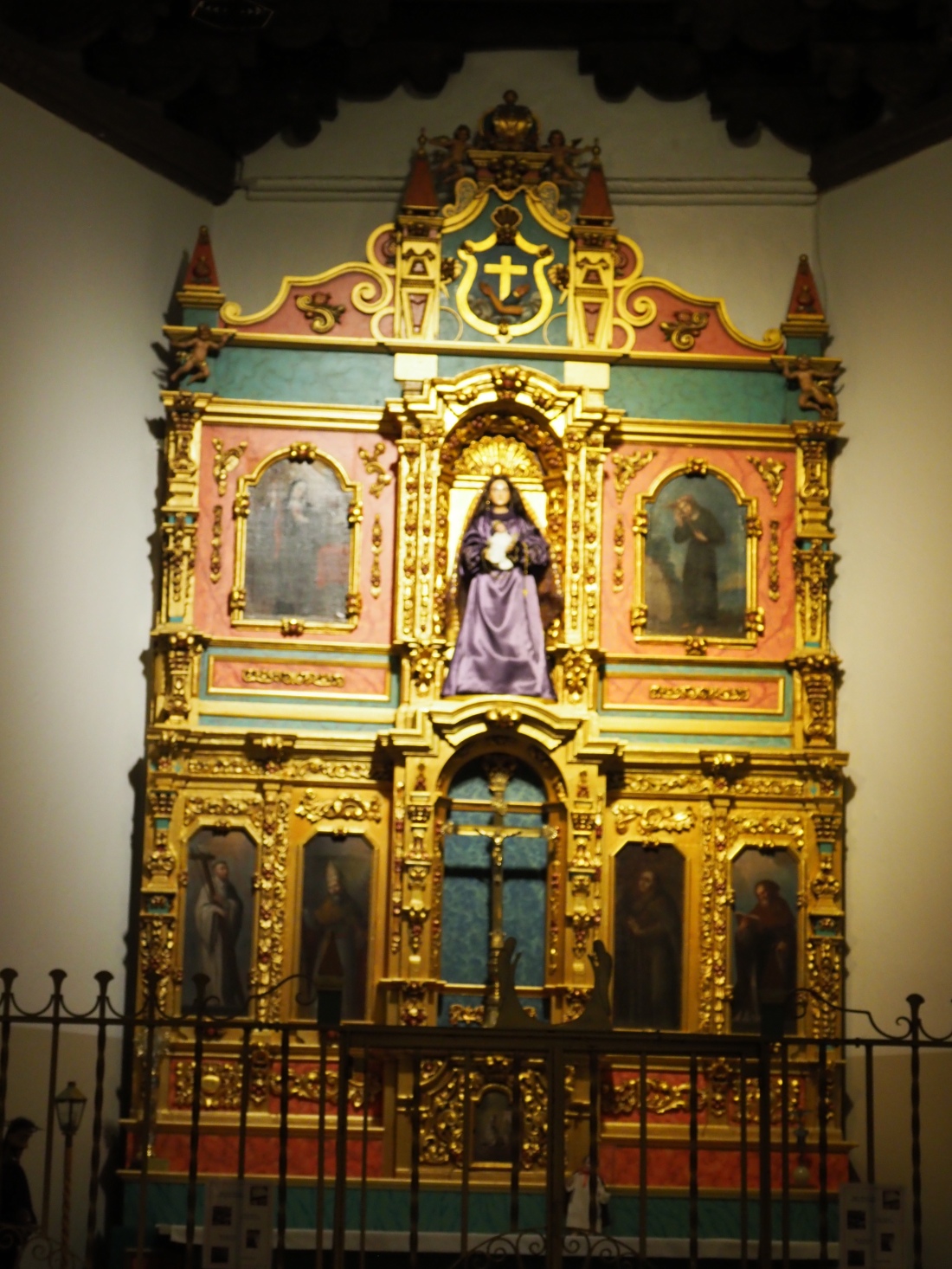 Across the street from the Basilica is the IAIA Museum of Contemporary Native Arts. The work displayed is not limited to artists living in New Mexico, but includes work by Native American artists throughout the United States.

My favorite exhibit was a collection of drawings by Dwayne Wilcox (Oglala Sioux,) that illustrate moments in the social problems faced by the residents of the Pine Ridge Reservation in South Dakota. The drawings were made on ledger paper in ink and colored pencil.

Upstairs, “The Holy Trinity” mural depicted strong women who were important to the artists, Robyn Tsinnajinnie and Austin Big Crow. The mural was painted on a wall along a narrow hallway wall, across from a window wall. I couldn’t get a straight-on image. This was the middle figure:

Near the museum and the Basilica was the Inn and Spa at Loretto, which was actually a remodeled parochial school, the Loretto Academy, which was connected physically to the Loretto Chapel, a beautiful chapel, but no longer a consecrated chapel. It is owned by the Inn and Spa and rented for weddings and other occasions “consistent with the tone of the building.” It still feels very much like a chapel when you are inside.

The outstanding feature of the Loretto Chapel is the spiral staircase, which is reknowned for its story as well as its design.

The Chapel was built in the 1870s to serve the Loretto Academy, established by the Sisters of Loretto (Loretto is a village in Italy.) It is reputed to be the first Gothic structure west of the Mississippi, but was built without a way to get to the choir loft from the chapel floor. There’s no information on how this happened (!), but every carpenter who was consulted replied that a stairway would take up too much room and the Sisters were advised to use a ladder or rebuild the balcony.

The Sisters made a Novena to their patron saint, Saint Joseph the Carpenter. On the 9th and final day, an unknown carpenter arrived. Using only the tools on his donkey – a saw, carpenter’s square, a hammer, and tubs used to soak the wood – he constructed the “miraculous staircase.” It has 33 steps in two 360-degree turns, with no center support. The brochure also said it is not held from the sides. It does seem that there is a brace now, although it doesn’t seem strong enough to withstand hard use.

After finishing, the carpenter disappeared without asking any payment. 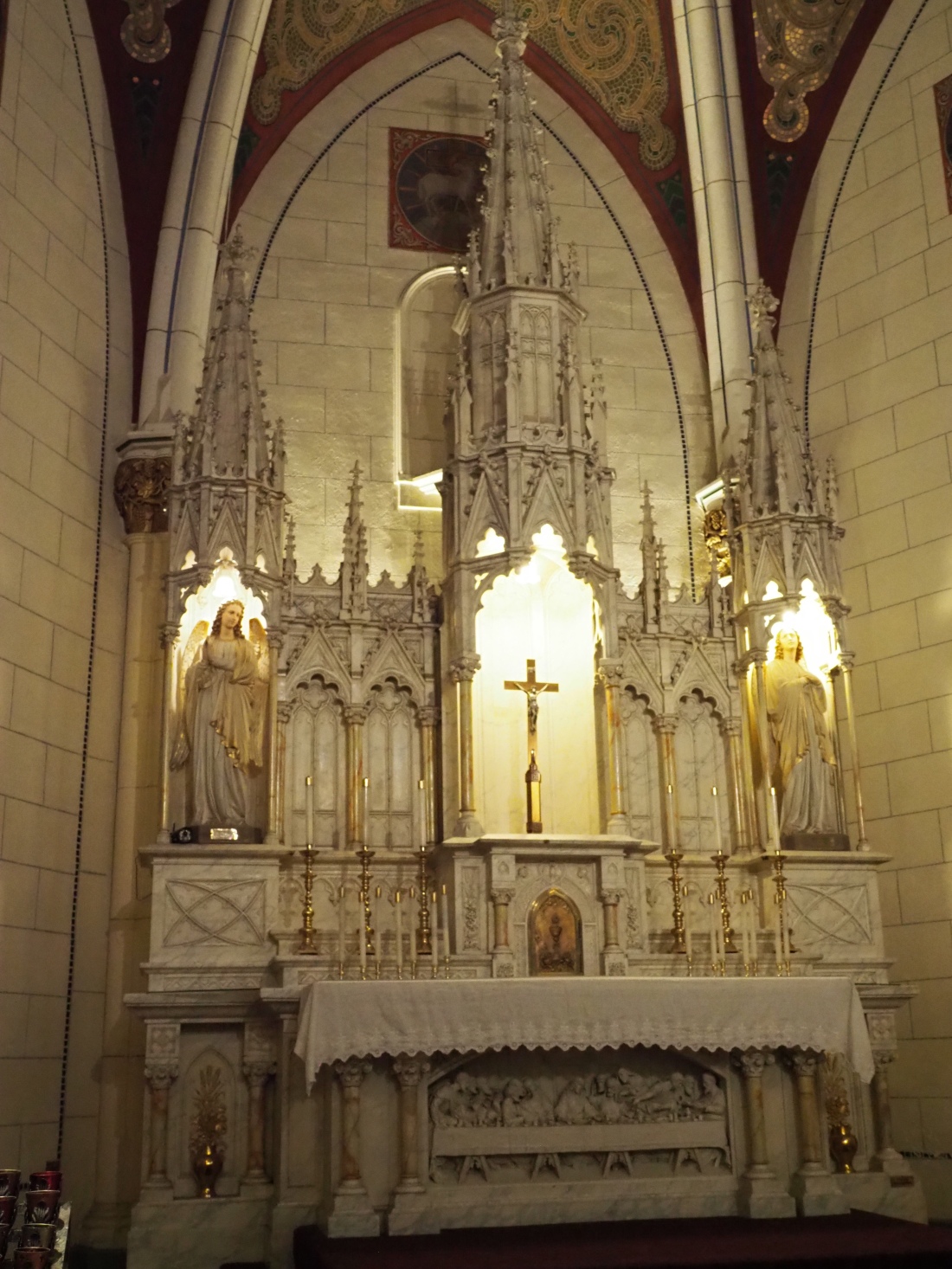