Osh Bazaar, also called the Jayma Bazaar, has existed on this location for over two thousand years, since the time of the Silk Road. And everything you could possibly need for daily life can be found here – even a pool table, although that probably wasn’t an original item.

But fresh produce, nuts, spices, meats, textiles, traditional clothing, and handcrafts have been around since the beginning. Now, there are also booths with modern clothing and books.

It is a large market and it’s easy to lose your way, but getting re-oriented is easy if you pay attention, and the people are very helpful. Not surprisingly, the area easiest for tourists to access is dedicated to a variety of souvenirs, such as felt slippers or komuz, the national musical instrument. These souvenirs include the “Kalpak,” the traditional high-crowned hat worn by men in Kyrgyzstan to this day – you see them everywhere and they are very popular with tourists. The shape and white color represent the white mountain peaks that are always in view in Kyrgyzstan. At least, that’s what the tourist bureau says. I suspect the white color is more the result of the material – cleaned wool felt – than any forethought about symbolism.

That said, the surrounding mountains were an integral part of Kyrgyz life, and remain important today. The Kyrgyz nomad tribes tended to migrate “vertically,” spending spring and summer in the mountains, grazing their animals on the “jailoos,” higher altitude pastures, and then moving into the valleys for fall and winter.

The best kalpaks are made from genuine wool and their price is therefore higher, but you can also buy less expensive kalpaks made from other materials with a similar look. Kalpaks are decorated with black embroidered traditional designs, and, traditionally, the higher the peak, the more notable the wearer.

The clothing for sale in ancient times was handmade, but nowadays, much of what’s in the Osh Bazaar is imported from China or Turkey. Kyrgyzstan’s garment and textile industry is alive, well, competitive, and more upscale than what is found here. If you are interested in locally made garments, look for the “Made in Kyrgyzstan” label.

Throughout the bazaar, I noticed brick arches, painted white. These were the entrances to the ancient bazaar that flourished during the era of the Silk Road. Coming from a much younger country, I am always astonished at the way the “old” is incorporated into the “new” as life continues in the same location for a thousand years or more.

Although the nomad culture revolves around pasture animals, agriculture is well developed in the Osh region of Kyrgyzstan. Agriculture is the largest employer here and in Kyrgyzstan as a whole, with 40% of the labor force, and accounts for about 20% of the GDP.

The climate and soil enable Kyrgyzstan to produce enough fruits and vegetables for immediate consumption and drying and preserving. Apricots are the most popular fruit, grown mostly in the Batken province, and they are also exported to Russia and Kazakhstan. Dates are also popular locally, but they are imported from Iran, and are significant to the Muslim community, especially during Ramadan.

Nuts, such as pistachios, almonds, and walnuts – especially the walnuts – are produced in Kyrgyzstan. Local legends suggest that walnuts were endemic to Kyrgyzstan, and it was Iskender Zulkarnay (otherwise known as “Alexander the Great”) who discovered them when he conquered Central Asia, and imported them to the Balkans, another example of the power and influence of the Silk Road. 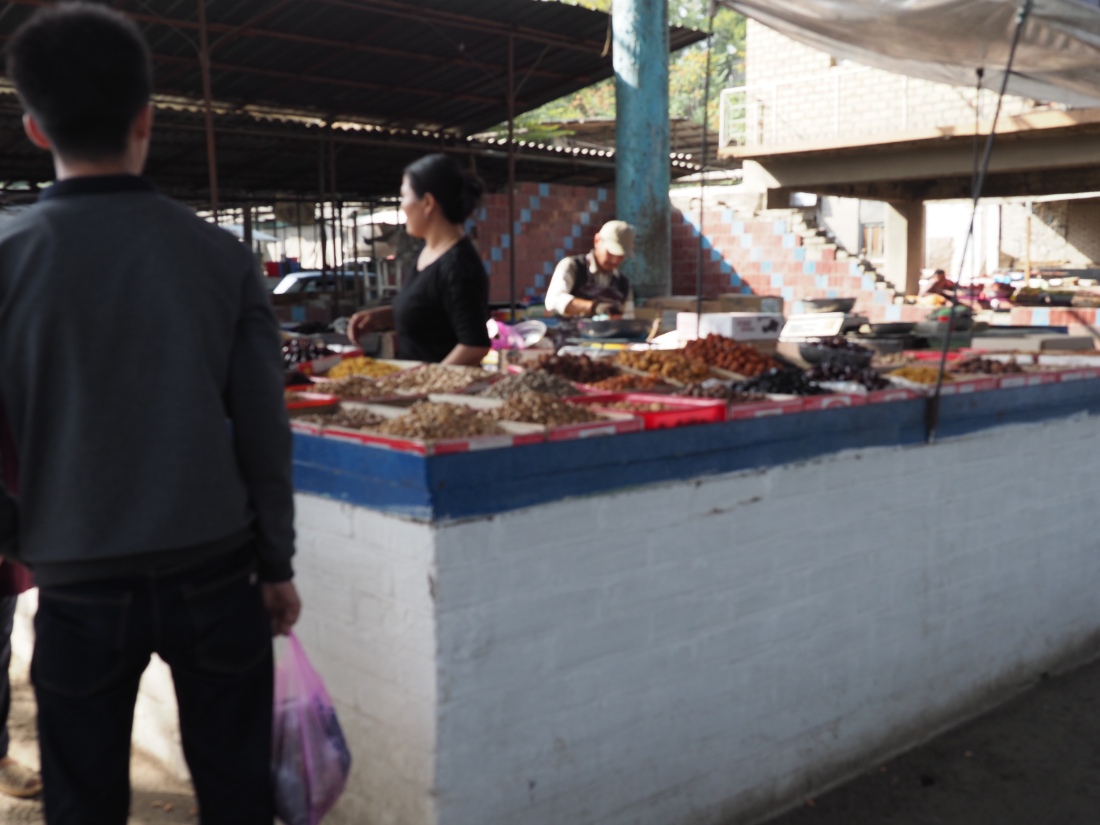 Spices came through Osh and all of the markets along the Silk Road from the east, and local dishes have at least one or two spices as their core elements. Today, spices are still used for medicinal purposes just as they were a thousand years ago – cumin, pepper, paprika, curcumin, saffron, and more were described in the books of Avicenna, a famous Persian physician and writer. One well-known national dish in Kyrgyzstan is “plov.” You may know this as “pilaf.”

Across the aisle from the spice vendor, the new mixes with the old again. One section of the bazaar displays pool tables, and a couple of salesmen attempt to attract interest (and pass the time, no doubt) by playing while people watch, although he wouldn’t let me take his photo while playing. 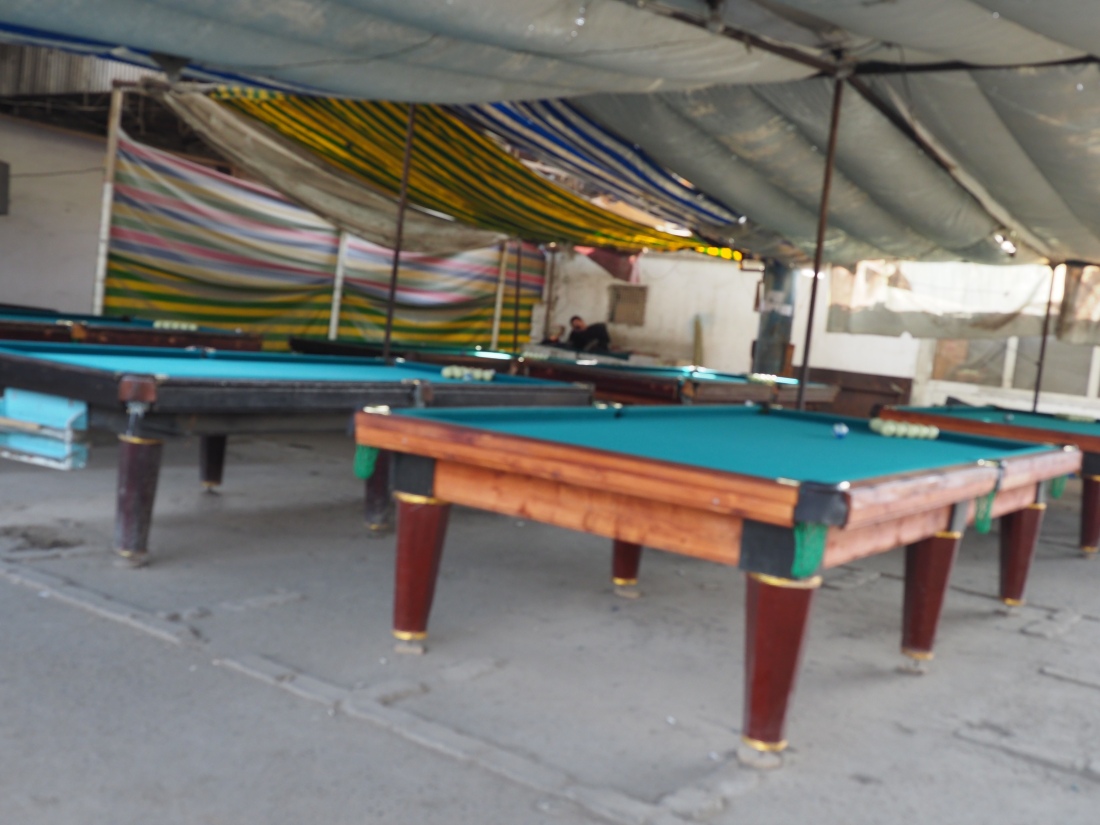