Osh was next on my agenda. Because of the road network, the way to Osh from Bokonbaevo, even by direct taxi, was a 13-hour drive. Most people chose to take a marshrutka from Bokonbaevo to Bishkek, and travel from there to Osh. I followed the crowd and took the marshrutka to Bishkek, then flew on Pegasus Airlines to Osh.

I landed in Osh in time to see Osh Day, October 6th, as they celebrated over 3,000 years of city-ness. (They actually claimed 3,018, but I believe there is a certain element of arbitrariness in that number….) But everyone agrees, Osh is the oldest city in Kyrgyzstan.

One of the impressive things about Kyrgyzstan is how proud they are of their nomad heritage. The Kyrgyz flag incorporates the tunduk, the circular grill-like piece at the top of a yurt, and 40 rays of the sun, which represents the traditional forty tribes that formed the Kyrgyz nation. Gulmira had a sticker on her car that said, “Proud to be a Nomad!”

But they are also proud of the many cultures that have left their mark, and so the dance performers came in a variety of costumes and styles, from stylized traditional folk dance to a ballroom waltz:

Plus, a little Ninja Turtles: 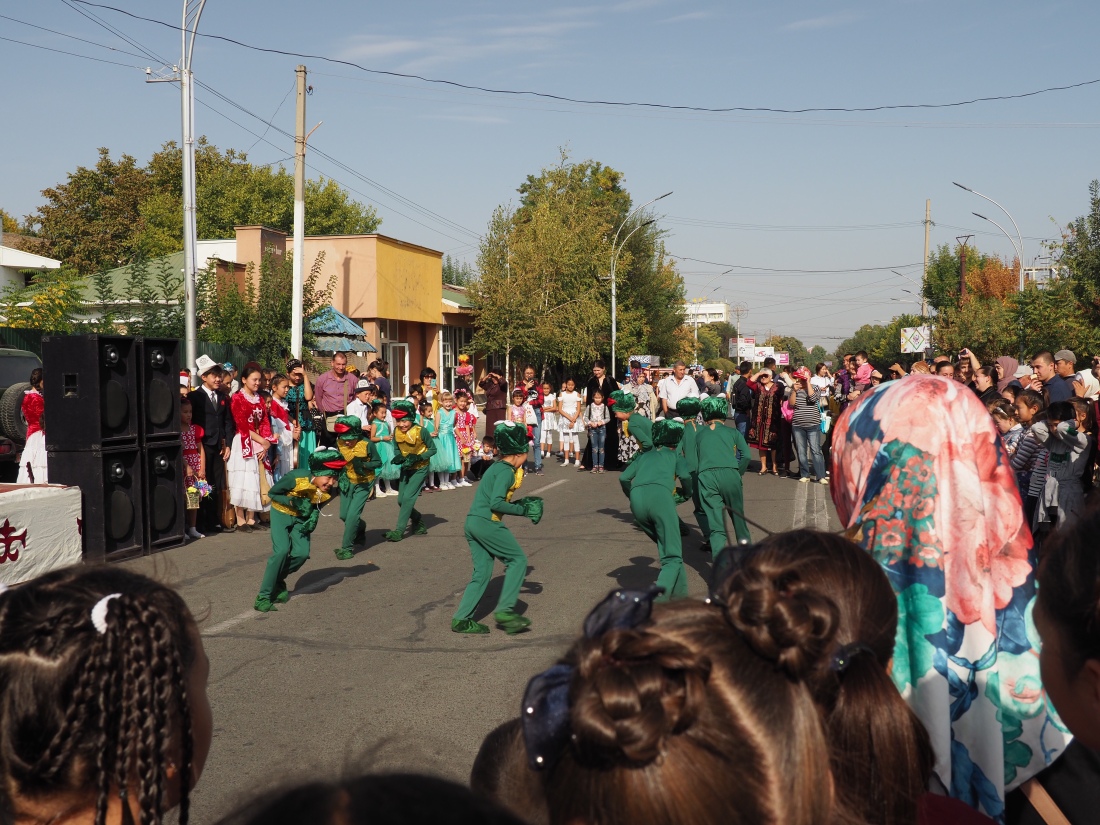 Kyrgyzstan is making sure that traditional instruments survive. These instruments were common to all of the nomad tribes, so they are found in Kazakhstan as well as Kyrgyzstan. This young lady is a student of the “komuz.” 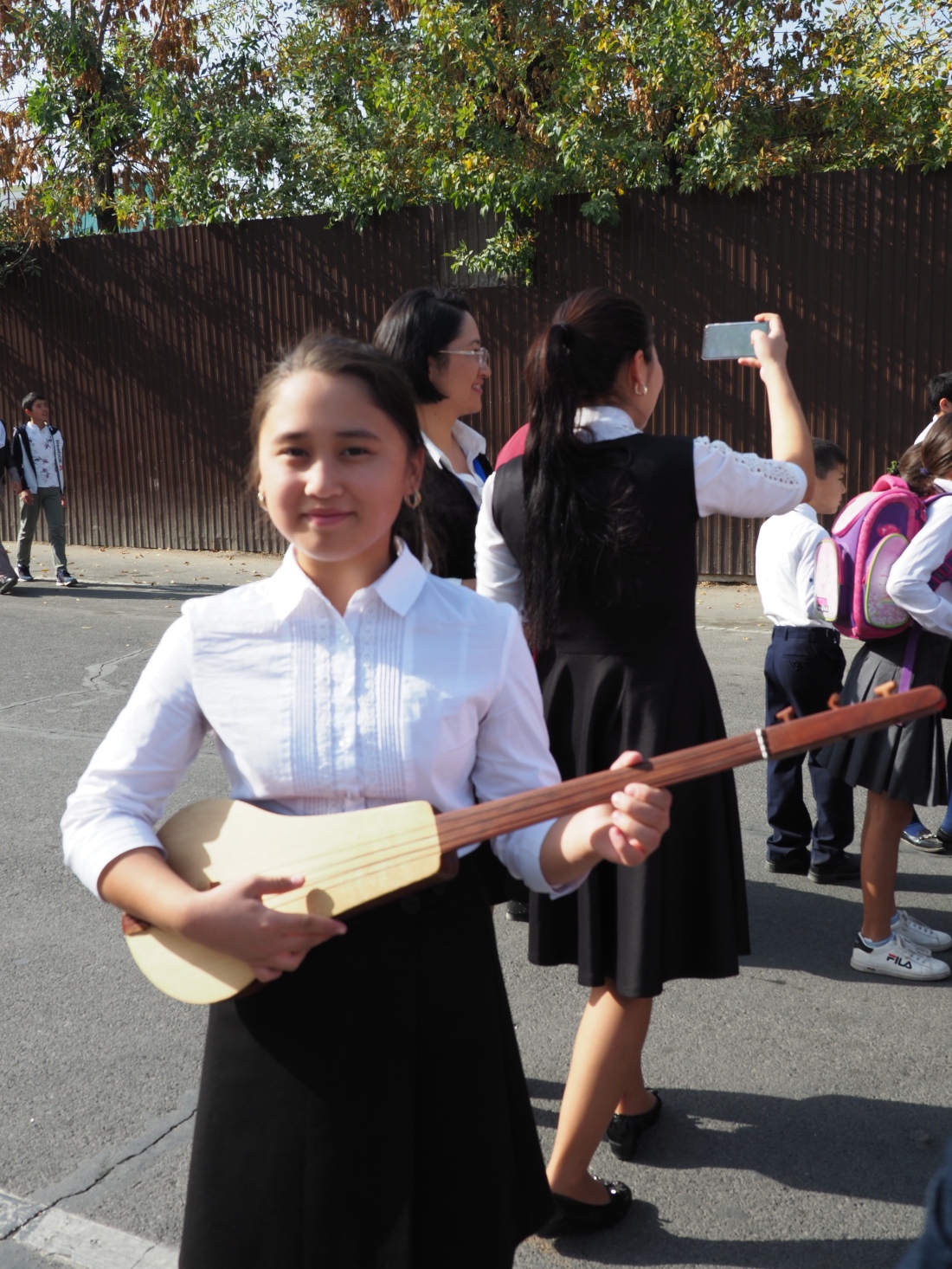 Other kids participated in street art with chalk: 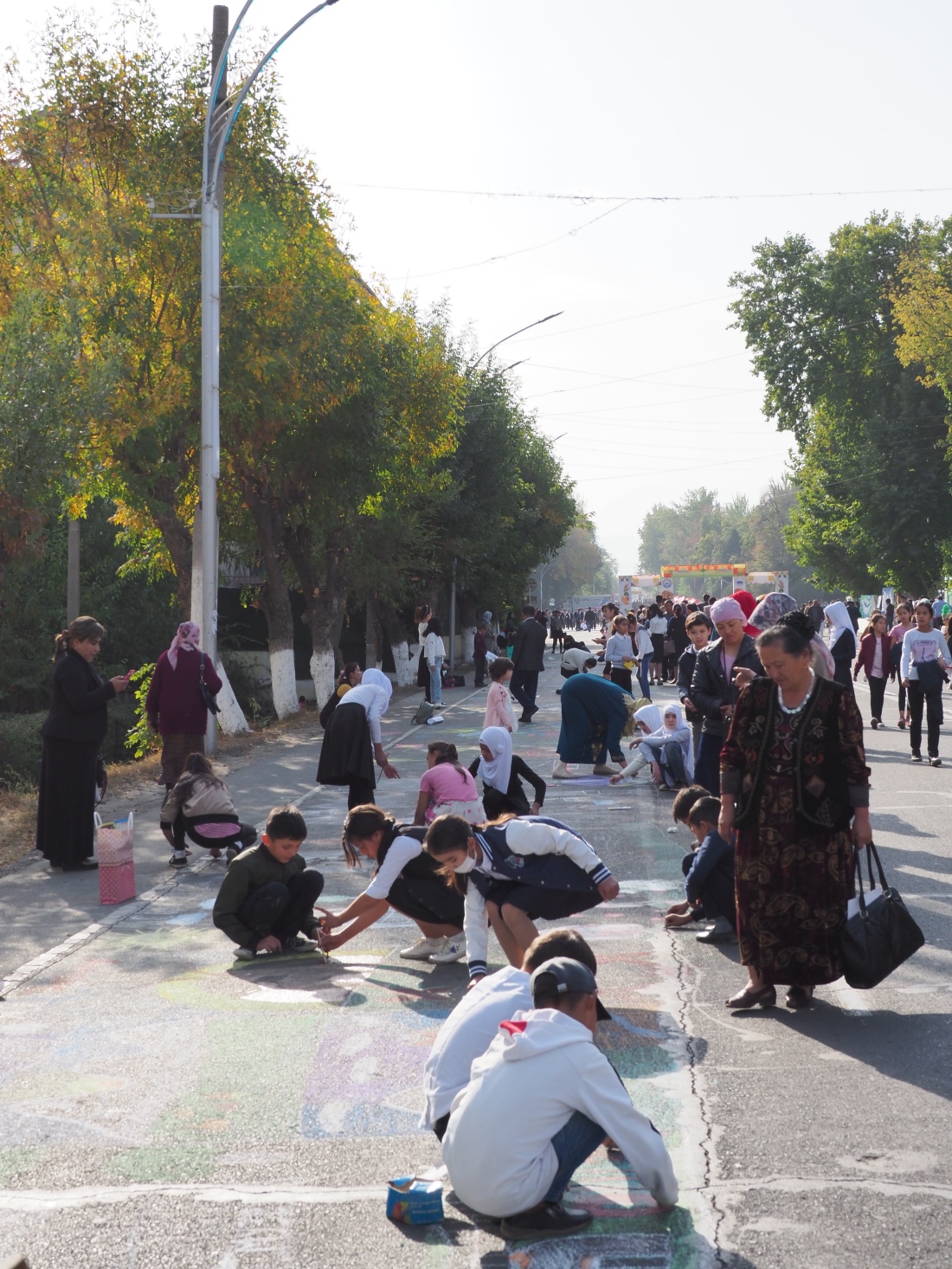 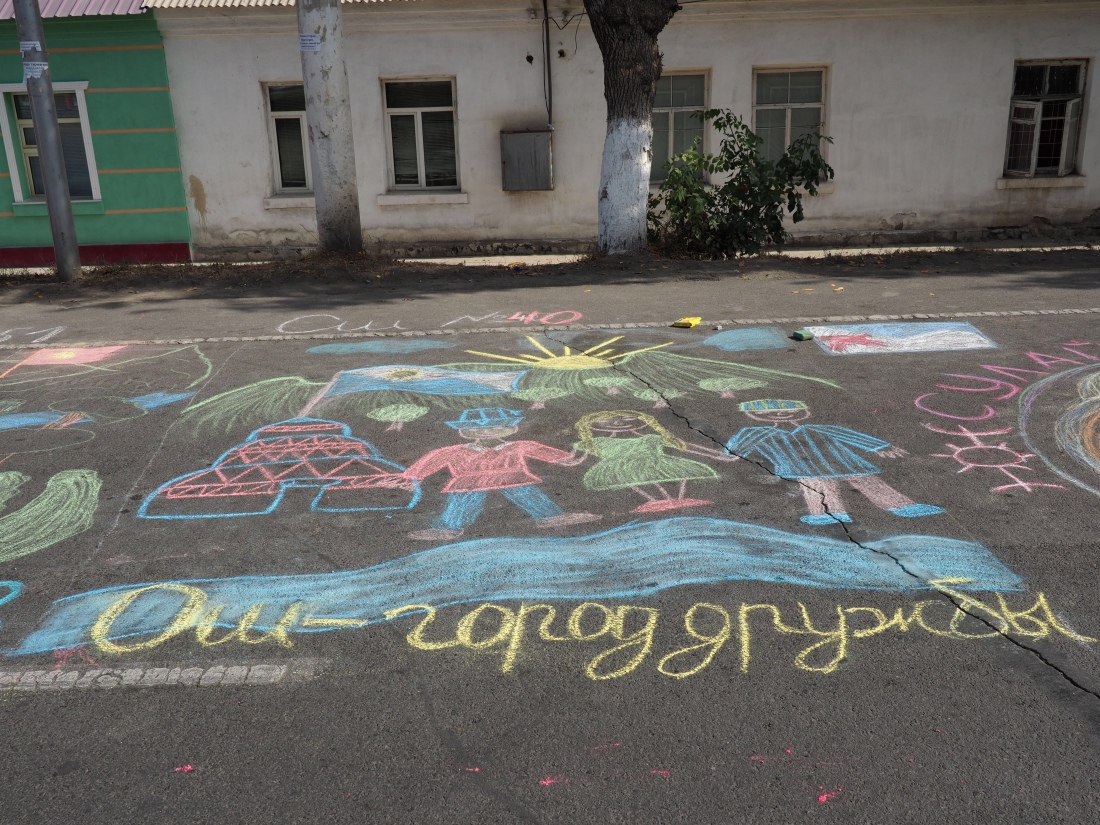 This one (above) had a theme of “Friendship in Osh.” 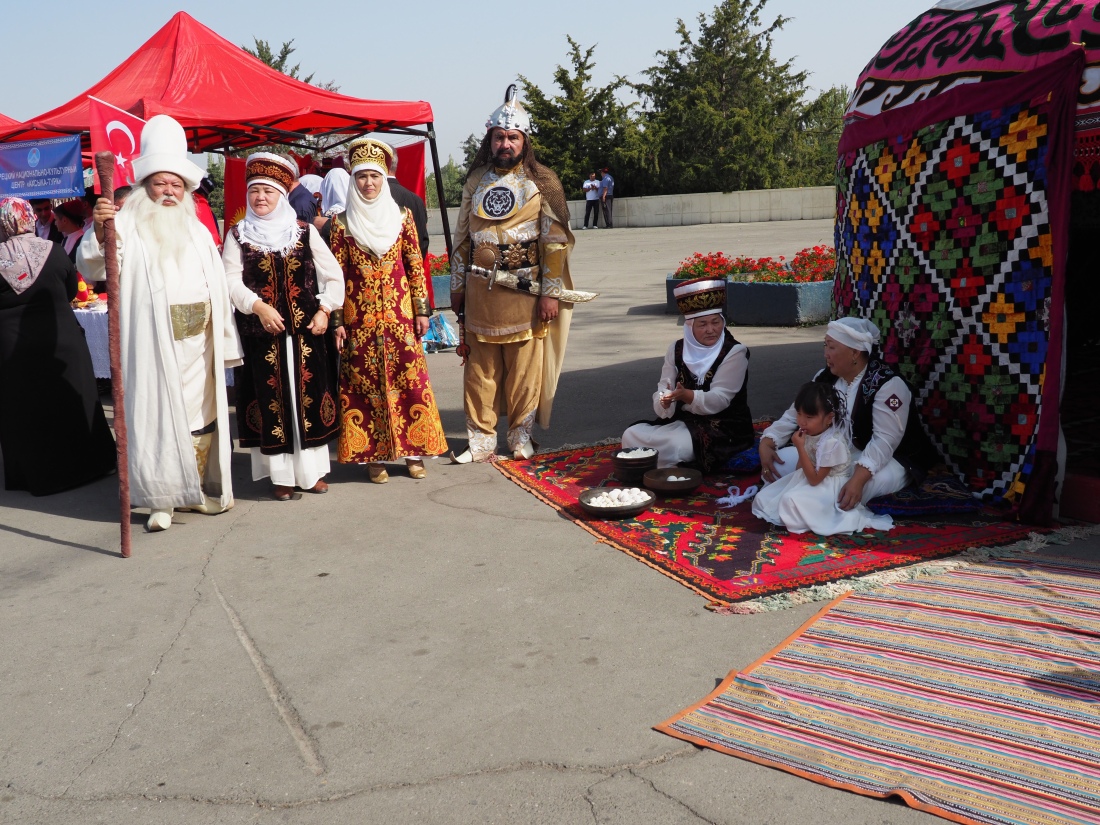 The man in white is wearing clothing that identifies him as a high-status member of his community. The height of his cap is the giveaway that he is held in high esteem. The women are wearing traditional formal wear for married women. Those round “hats” are actually solid rolls of clean, white cloth immediately available for events like swaddling a newborn or providing a shroud for a newly deceased.

There folk dancers performing under the watchful eye of Vladimir Lenin. I seem to have cut him out of the photo in order to focus on the dancers, but he will appear next time.

And, of course, souvenirs! 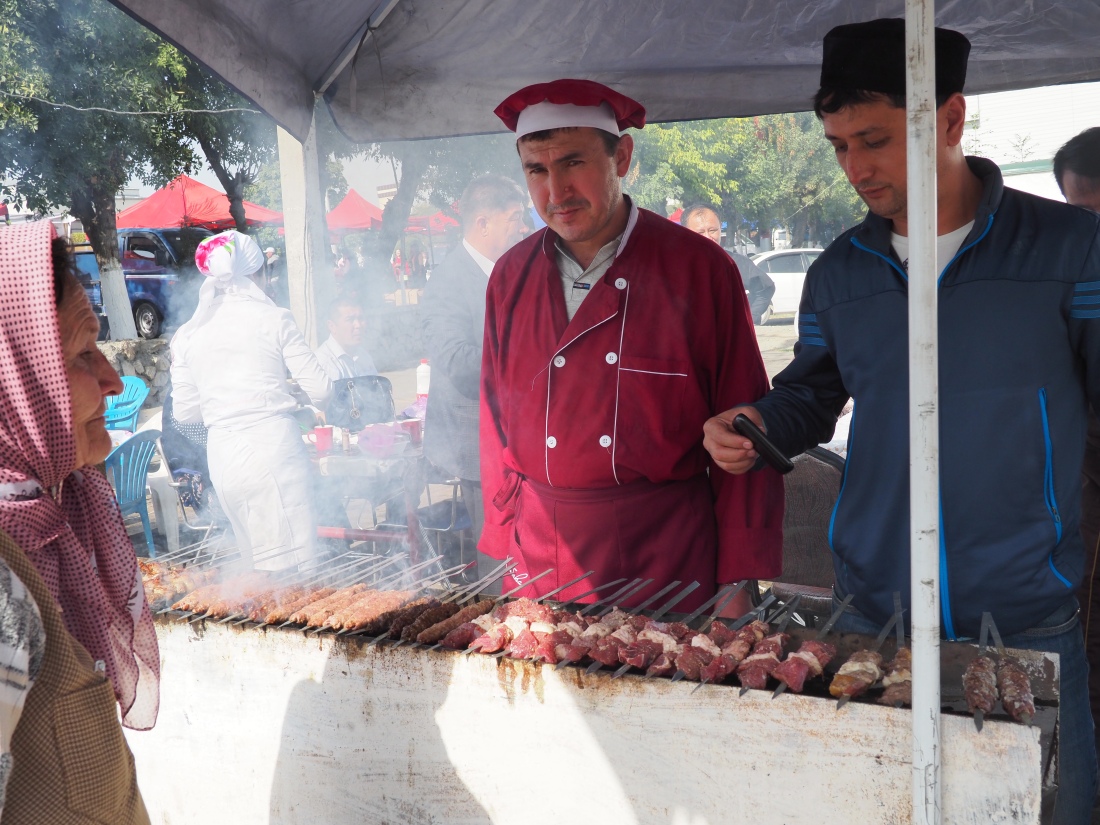 And some indulged in a pick-up game of chess. I first met this tradition in Osh, where men play chess, usually in the parks, of which there are several. Today it was set up in the square as part of Osh Day.

I was walking back toward the center of town, where I could rest my tired feet and have a cup of coffee, when I passed this table. I asked if I could take their photo, and they were pleased that I asked. The next thing I knew, I was having tea and cookies and a pastry and other goodies with them.

It turned out that they were teachers at the local school, and when they found out I was an American, nothing would do except that I should come and talk to their students and tell them about America. They were quite excited.

However, they failed to get permission from the school administrator at the next table before asking me, and you know how administrators can be. She nixed the idea based on the fact that, well, you know…she didn’t have a five-page background check on me, I guess. I sympathize in some ways, because she’s responsible for the kids in the school, but it was too bad. I had warmed up to the idea, and I knew I wasn’t going to tell them about smoking pot or carrying guns or revolution or whatever horrible thing was playing in her head, but she didn’t know that. Anyway, it never came to pass.

After spending the time with the women, answering questions about the U.S. and traveling alone and my children and grandchildren, I continued on my way.