Bokonbaevo, a village on the southwestern shore of Issyk-kul, was my next destination. Here, I stayed at Guesthouse Emily, owned by a charming family, who named the guest house after their daughter, Emily. Emily has since been joined by a sister, Eleonora, and Gulmira and Almaz have their hands full! 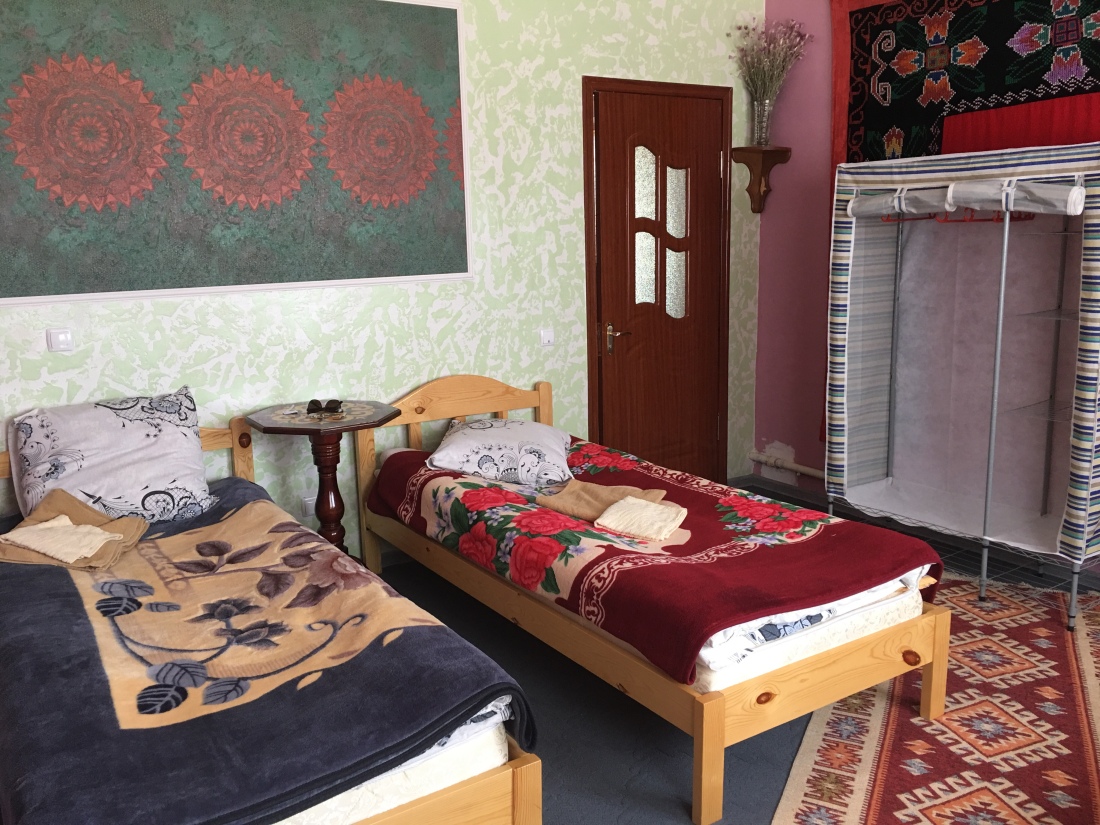 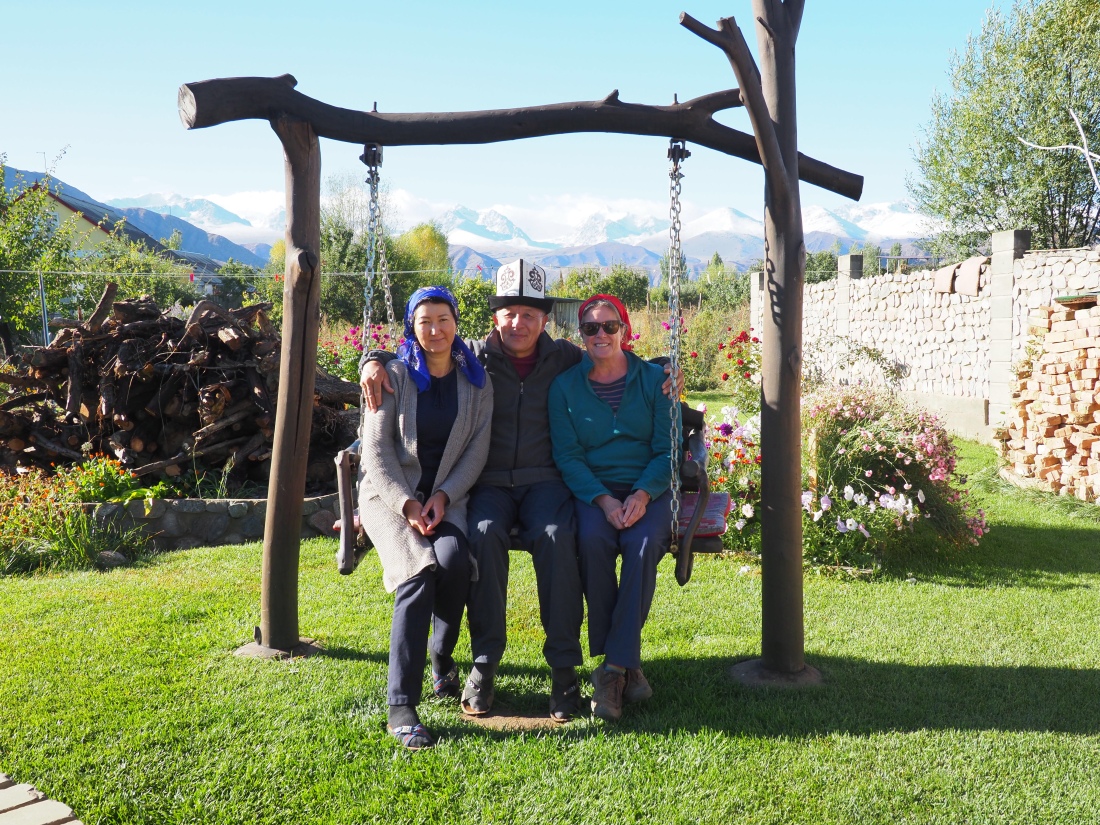 Bokonbaevo is a small village. Its scenery is beautiful, just like the rest of Kyrgyzstan. It was past beach season as far as I was concerned, but in the summer, Bokonbaevo has a lovely beach on the shore of Issyk-kul, which is warm and salty and easy to swim in.

Like most Kyrgyz villages, there is an open air market, with the predictable huge bags of onions and potatoes, but also many other fruits and vegetables:

I hired a driver for the day, and on the advice of Destination Bokonbaevo, I went off to see the geologic wonders along the south shore of Issyk-kul. My driver, Kuban, was Kyrgyz and didn’t speak much English at all. The staff of the Destination office took care of negotiating the hire, and told me to pay half at the beginning and half at the end.

As we drove along the two lane highway, we passed a rock outcrop with a statue on the cliff, overlooking the shore of the lake. By now, I was sure I knew it was Manas, but I asked anyway. “Manas?” I said, pointing at the statue:

Kuban startled me by breaking into song. I don’t know what the words said exactly, I just know there was no doubt that it was a song in praise of Manas. The song had a chorus, which he sang three times in the three verses, accompanied by an arm motion that indicated strength and commitment. I am so sorry that I didn’t get it on video, but it’s not something I think of right away, and the memory would be diminished by asking him to start again. But if I had any doubts about whether or not I liked Kuban, they disappeared. All of a sudden, he was a real person, who is proud of his homeland.

Our first stop was “Fairy Tale Canyon,” or Skazka Canyon – skazka being Russian for fairy tale. It is so named because the geography is so unlike anything else in Kyrgyzstan, a large area on the shore of the lake that looks more like it belongs in the desert. Large hills of sandstone have been eroded by water and wind into a network of canyons, looking as if a giant someone had poured reddish cement onto the ground and it solidified in the process. The contrast with the water was beautiful. I climbed to the top, where the peak was narrow and steep, so that my knees began to wobble.

The legend about Fairy Tale Canyon is that the Issyk-kul basin was once dry, and filled with a number of rich and powerful cities. This may actually have some basis in fact, as archeologists have found the remains of cities now submerged by Issyk-kul, probably by ancient earthquakes, as other legends tell of cities and villages that disappeared.

In this case, however, a large dragon fell in love with a beautiful young woman who lived in one of the cities. The young woman declined his offer of marriage, and so the dragon cursed the city, promising that water would come gushing from a well at the full moon, and would drown the city and everyone in it. The citizens held off tragedy by capping the well at each full moon, but, inevitably, someone forgot, and the city was wiped out. The dragon, when he saw what his curse had brought about, was so shocked and saddened that he turned to stone, embodied now by the ridges of Fairy Tale Canyon. 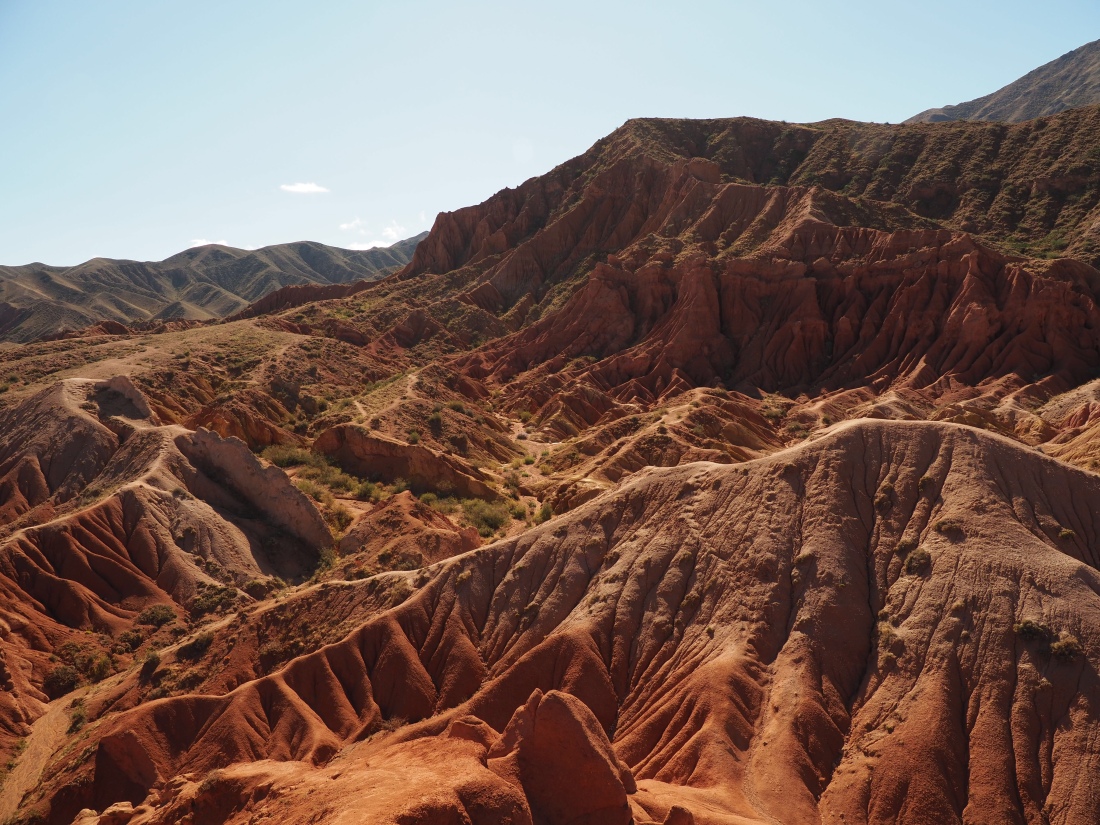 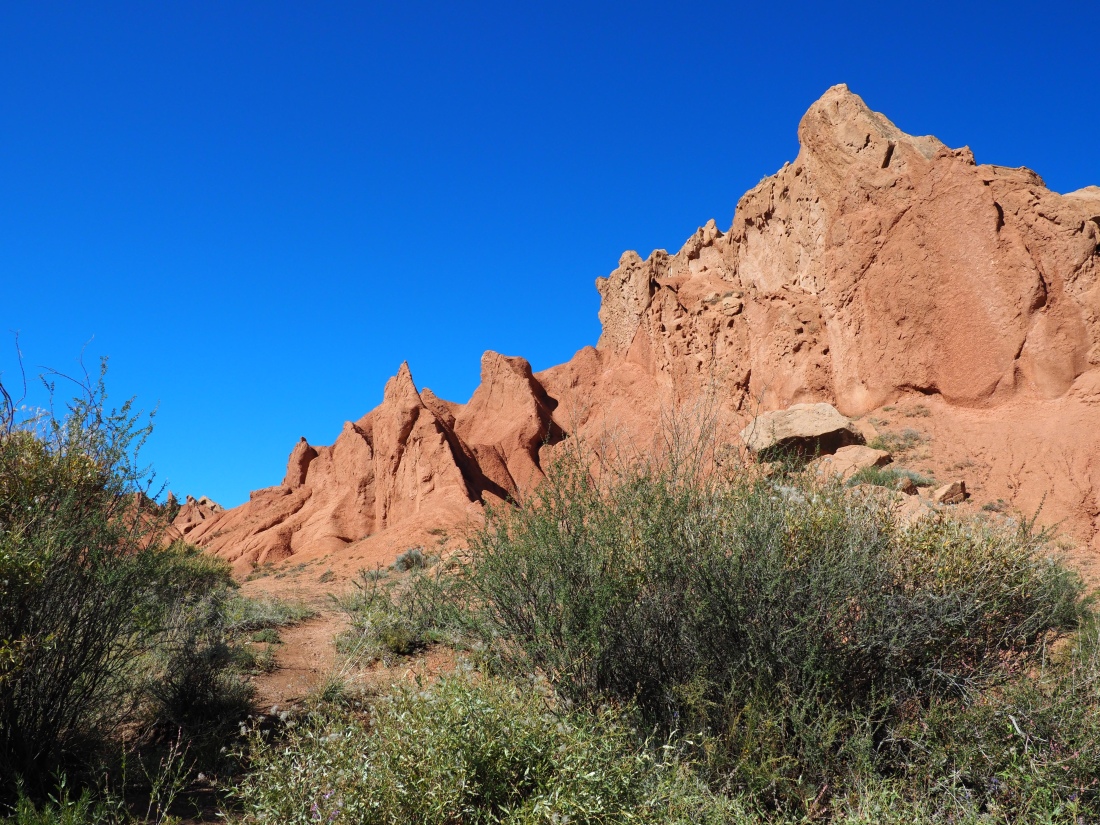 Our next stop was at the Barskoon Valley. It’s a beautiful valley with three waterfalls of increasing height. Kuban walked with me as high as the first waterfall, and that was as far as I got. I was surprisingly tired by the climb, although I discovered later that the elevation accounted for much of that – Barskoon Valley is a high-elevation alpine valley. The average elevation is 11,800 feet. We weren’t that high (I’ve been there on Mt. Rainier) but it was high enough to have an impact on me. Kuban was used to it and didn’t have any problem. 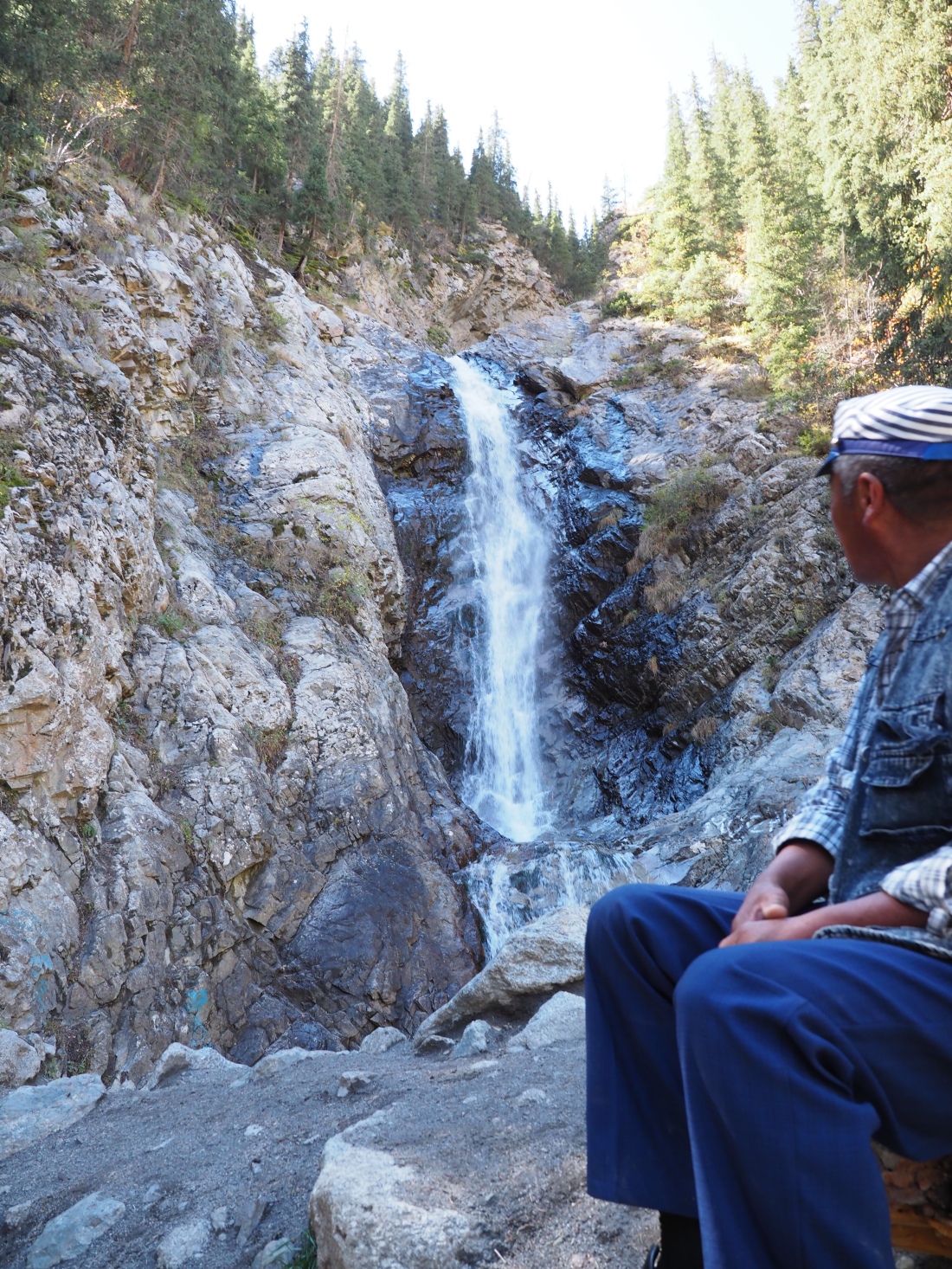 The valley was a favorite holiday location for the first Russian cosmonaut, Yuri Gagarin, and there are several monuments to him in the valley.

The trees growing on the valley slopes are Tien Shan spruce trees, and above the 2800 meter line, juniper groves flourish.

The road through Barskoon Valley runs south from Issyk-kul. If you followed it, you would go over Bedel Pass into the Xinjiang Province of China. It was once a connection for the Silk Road, but now, the road runs to the Kumtor gold mine, and casual visitors are not allowed.

Jedi Oguz translates as “Seven Bulls.” It is a red sandstone valley that turns out to be closer to Karakol than to Bokonbaevo. The vision of seven bulls came from the seven bluffs that have been formed from tertiary red conglomerate sandstone by wind erosion and the effect of freezing and thawing. The color is spectacular: 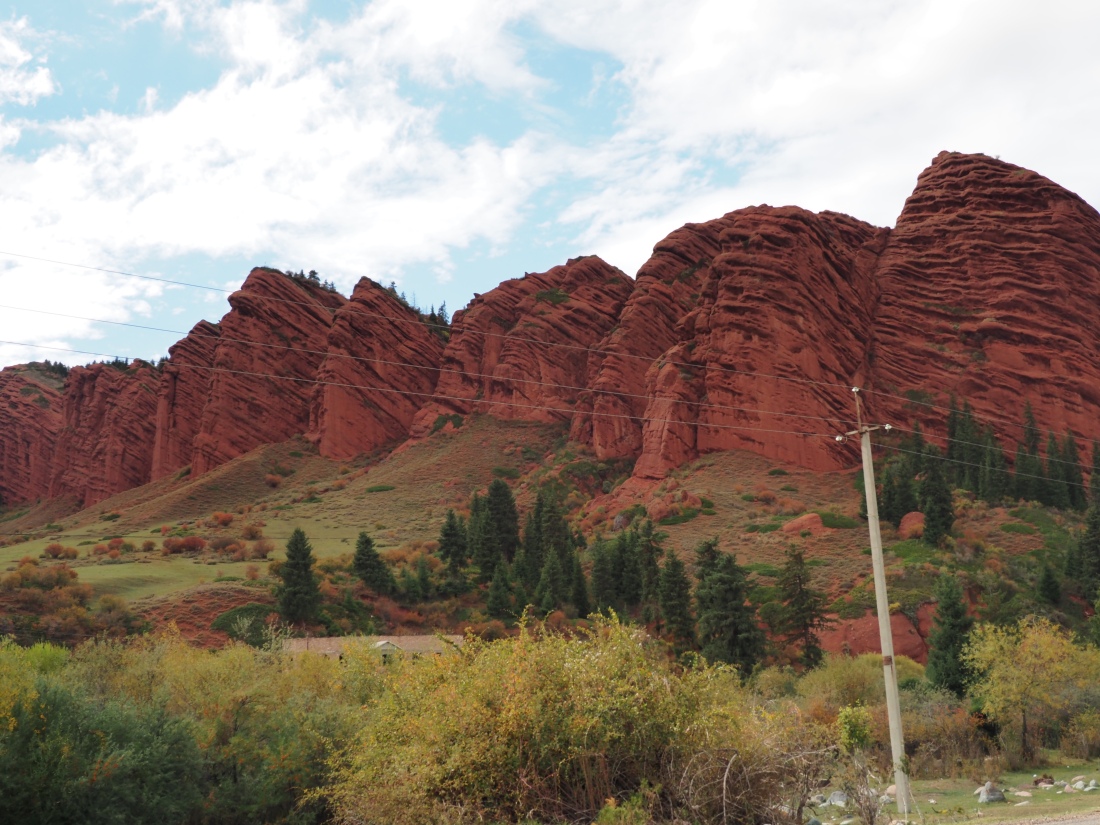 To the right of these bluffs, from another angle, one can see the “Broken Heart” formation, which naturally has a legend attached to it, a legend of one woman and two men who wanted to marry her. They fought over her and both of them were killed, and she died of a broken heart, now enshrined in red sandstone.

The one thing I was curious about, but haven’t found any explanation for, is how these different formations came to exist along Issyk-kul. No doubt they are the result of some kind of geologic activity having to do with the mountain formation. My language skills were not up to asking the question in a way that people understood, and I haven’t found the answer during internet searches.

Staying at Emily’s Guesthouse was quite fun because so many people passed through. In some places I have stayed, the dining room arrangements allowed for guests to eat separately, but Gulmira’s dining table was one long table that seated twelve – the maximum number of guests – and the table was always set with everyone as a group, and breakfasts and dinners were served at particular times (although allowances were made.)

It was a great thing, because the guests would start talking to one another and there were some interesting conversations – I had to explain how Donald Trump won the election when Hillary Clinton received more votes, for instance. I learned about the pharmacy industry in the Netherlands, and the challenges of education in Israel. I became the “senior guest” because many of the people who came through stayed only one or two days, whereas I stayed longer – part of my determination to have leisurely travels. It was a wonderful place to spend a few days.

From Israel and Netherlands (I loved Lineke’s coat!): 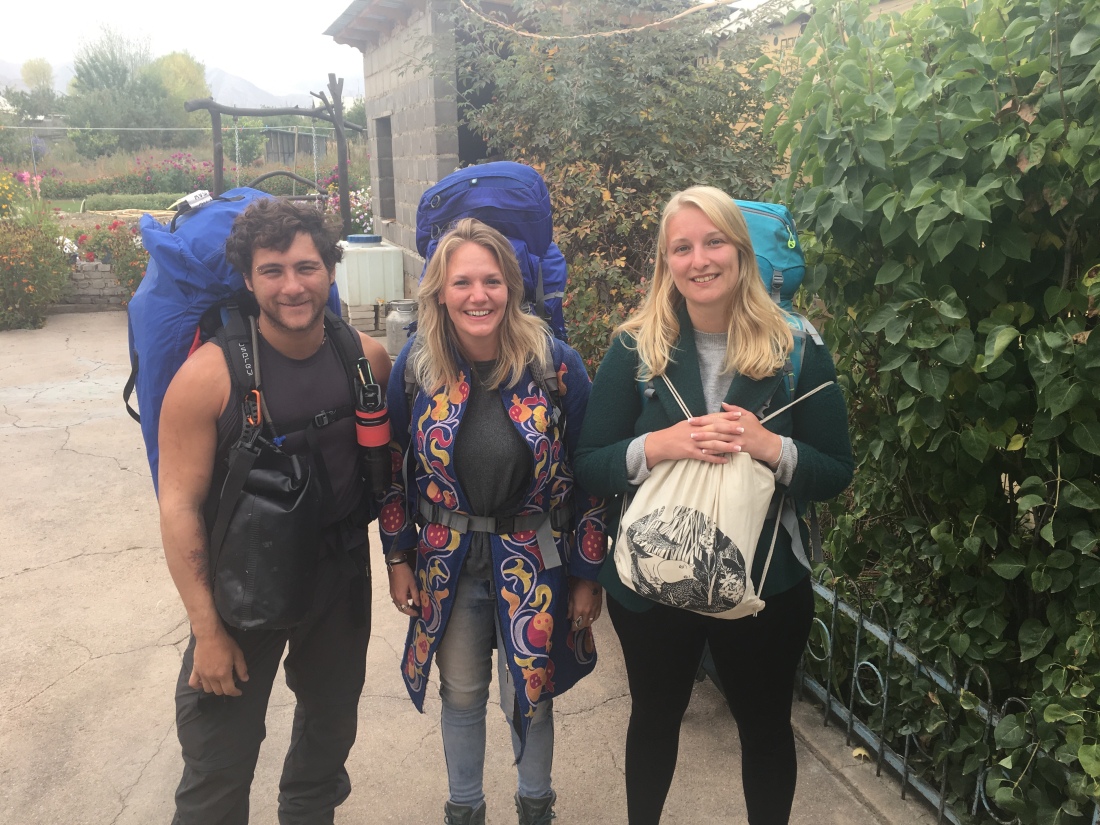 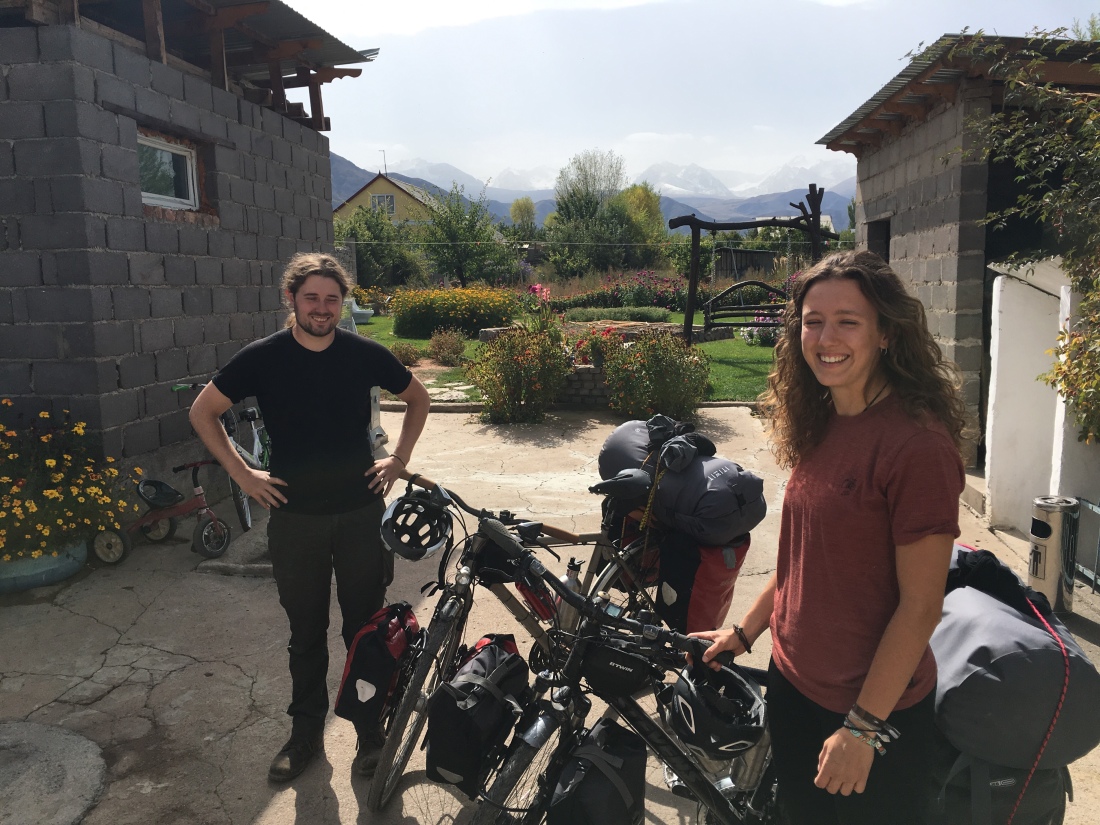 A family from Israel came to visit. He was surprised that I was traveling on my own and assured me I would find a husband. He assumed, of course, that I wanted one…. They invited a handler of golden eagles, the national bird of Kyrgyzstan, to the Guesthouse, and invited me to join in, which was very kind. 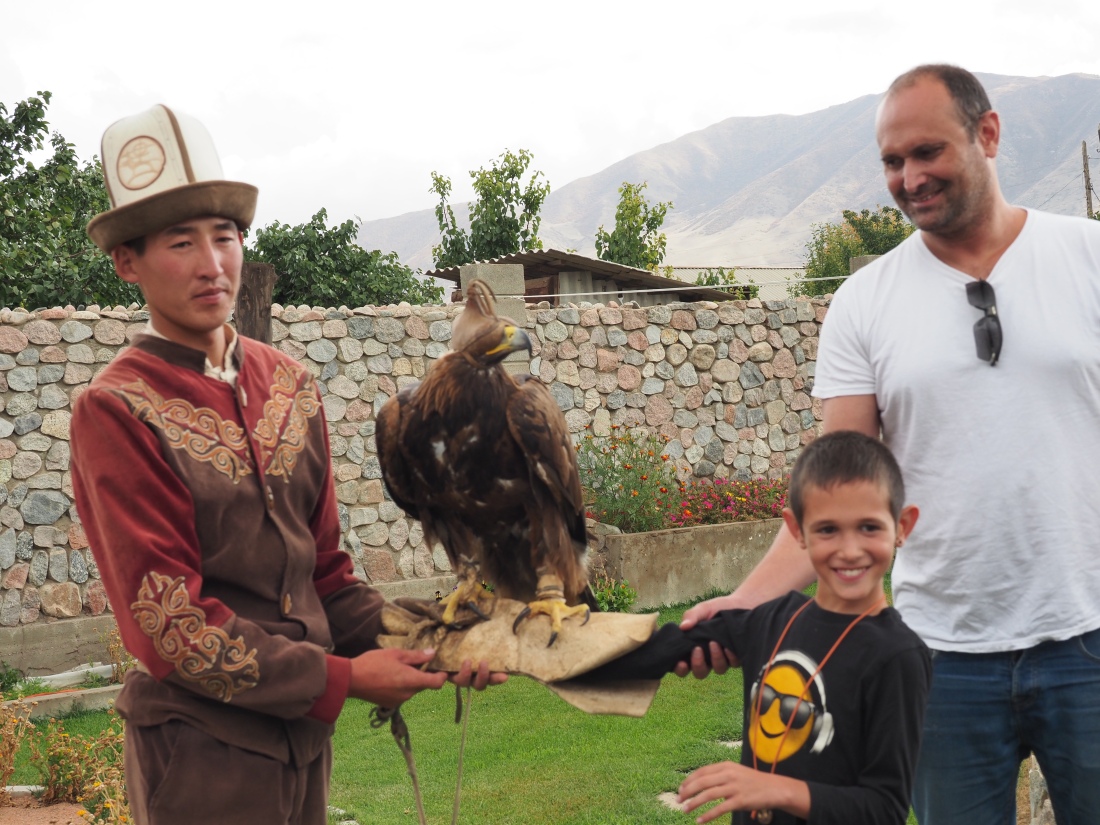 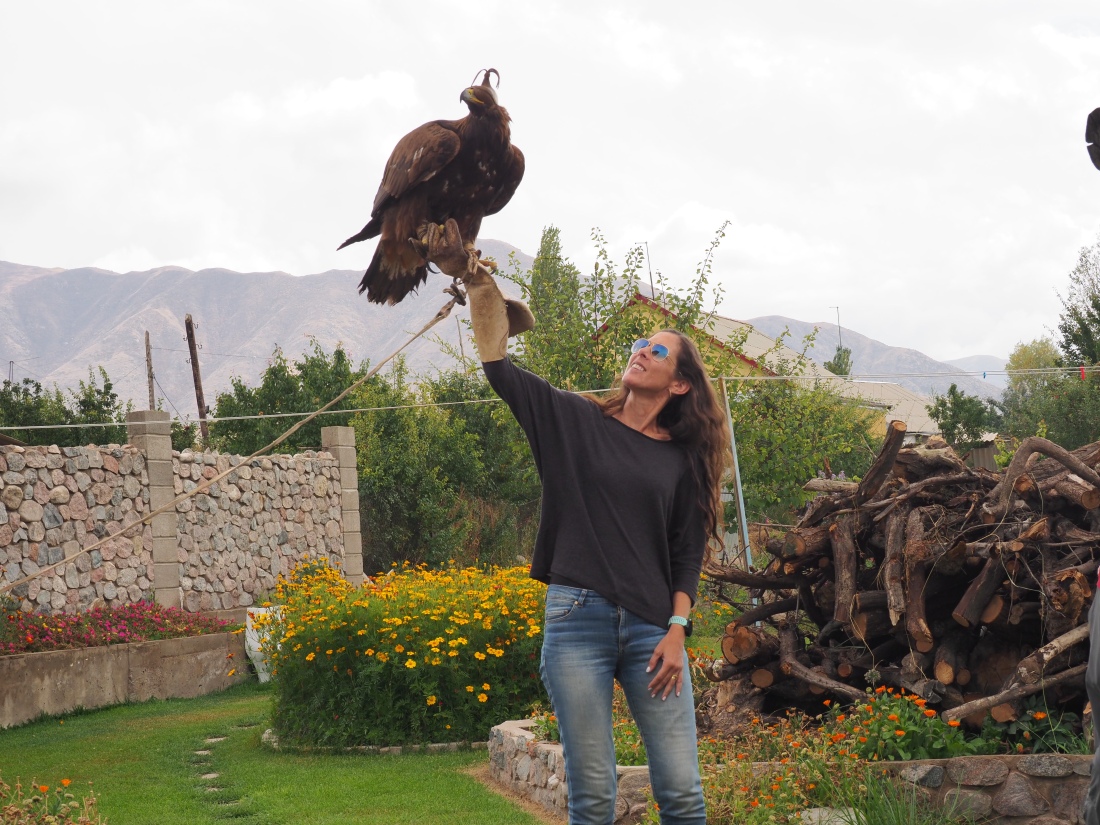 From Germany also, I think. They stayed one night, and weren’t very conversational. Gulmira is standing behind me, and I am wearing the traditional amulet she gave me to keep me safe while I travel. This was on the day I was leaving. Gulmira is a very special person, and the Guesthouse is the wonderful, friendly place it is because of her and her husband and children.