If you needed any evidence of “It’s a small world,” I was walking along the main road of Cholpon-Ata when I spotted a lost-looking tourist. I asked in English if I could help, and she responded in English that she was waiting for her cohort who was in the nearby store. “Where are you from?” I asked.

“Vashon Island,” she said. I laughed. I mean, what were the odds?

“I lived there for five years, a long time ago.” Naturally, we played the “Do you know….” game, but our timing was off. Kathy, her name is, had moved there after I had moved away, and we didn’t find any mutual friends or acquaintances. But, still, here we were, thousands of miles away.

While I was on Whidbey Island, I wandered into Fred Lundahl’s store in Langley, “Music for the Eyes,” which displayed crafts from Central Asia. Fred and his wife, Sharon, had served for years in Central Asia on behalf of the USA’s Foreign Service – a career I had considered at one time and in a place I planned to visit in the fall. We exchanged email addresses. He told me he was bringing a group to Central Asia, and we talked about meeting up somewhere in Kazakhstan, Uzbekistan, or Kyrgyzstan.

I was delayed in leaving the U.S., so I missed out on the earlier part of their trip, but we did meet up in Cholpon-Ata for a day during the World Nomad Games. Fred had brought three friends – Chris, Karen, and Gary. Chris and Karen are from the Seattle area, and Gary is from Port Townsend, Washington.

I enjoy traveling alone, but it is also nice to find people to share things with. Especially these people – they were easy-going, two of them were fluent in Russian (which is spoken nearly everywhere in Kyrgyzstan,) and they were interesting and interested humans.

Kok-boru was on the schedule again that day. Chris, Karen, and Gary had not seen the game played and were curious, so the Hippodrome became the first destination. They had hired a van and driver and his girlfriend who spoke English, so getting there was easy.

We watched the first game, and they found it fascinating, just as I had. Karen had some misgivings about using a real sheep carcass, so I shared with her that the winning team barbecues the carcass in celebration. She’s a vegetarian, so killing and eating the sheep wouldn’t have been her first choice, but she recognized that the slaughter was no more senseless than ordering a lamb kebab for dinner.

Fred, the old hand at Kyrgyzstan, grumbled that it wasn’t like “the old days,” when there were many fewer rules and players occasionally used their horse whips on other players, and pulling someone off their horse didn’t garner a penalty because, of course, there was no referee. For purposes of multi-national competition, the game had more rules and a referee who imposed penalties for breaking them. 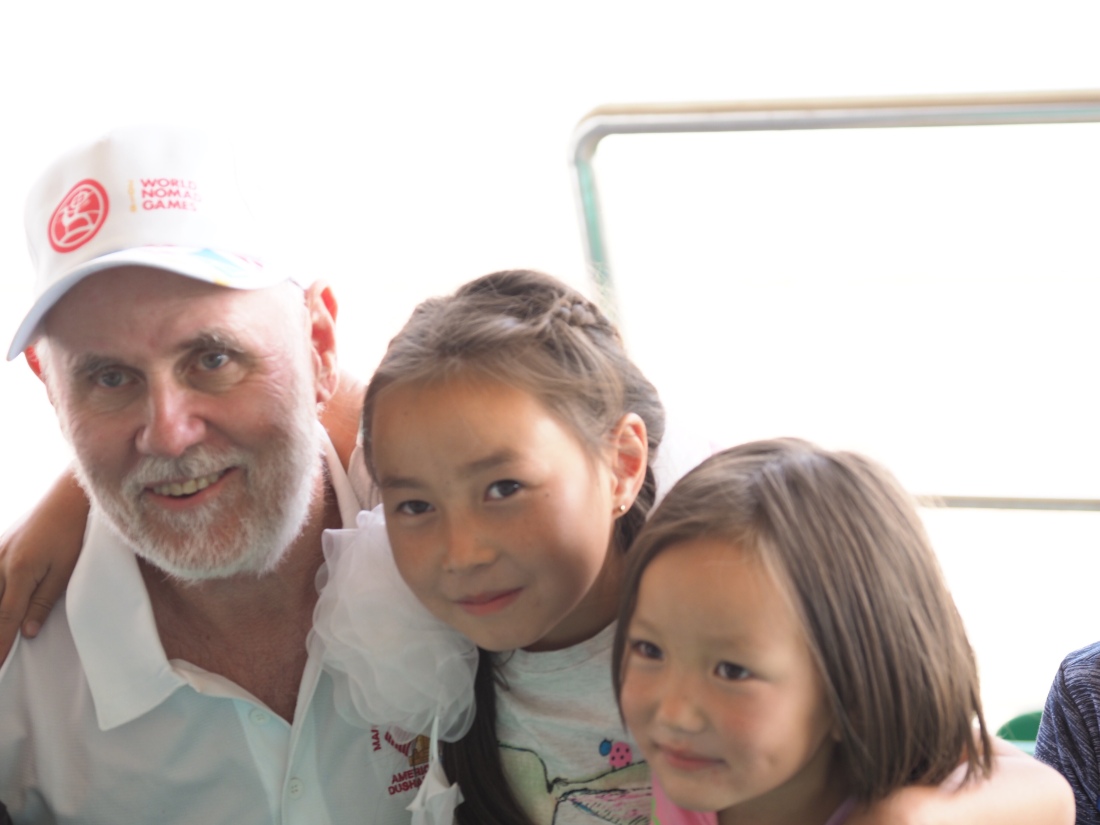 The USA team was scheduled to play in the afternoon, and naturally we wanted to see that, but we used the time in between to visit the Regional Museum and some landmarks in Cholpon-Ata.

The Regional Museum has artifacts, photos, musical instruments, and textiles that follow the history of Kyrgyzstan from the Bronze Age through independence from the Union of Soviet Socialist Republics (U.S.S.R.), which has now devolved into Russia and the CIS countries. I had visited already, but because the English interpretations had ceased halfway through the museum, I was happy to visit again with Chris and Karen to explain what the signs said.

There are a number of monuments in Cholpon-Ata, but Chris was especially interested in finding the WWII monument. It seems that there is at least one, built by the Soviet Union, in each village with more than one street. Cholpon-Ata’s was on the main street and we stopped for the photo op. 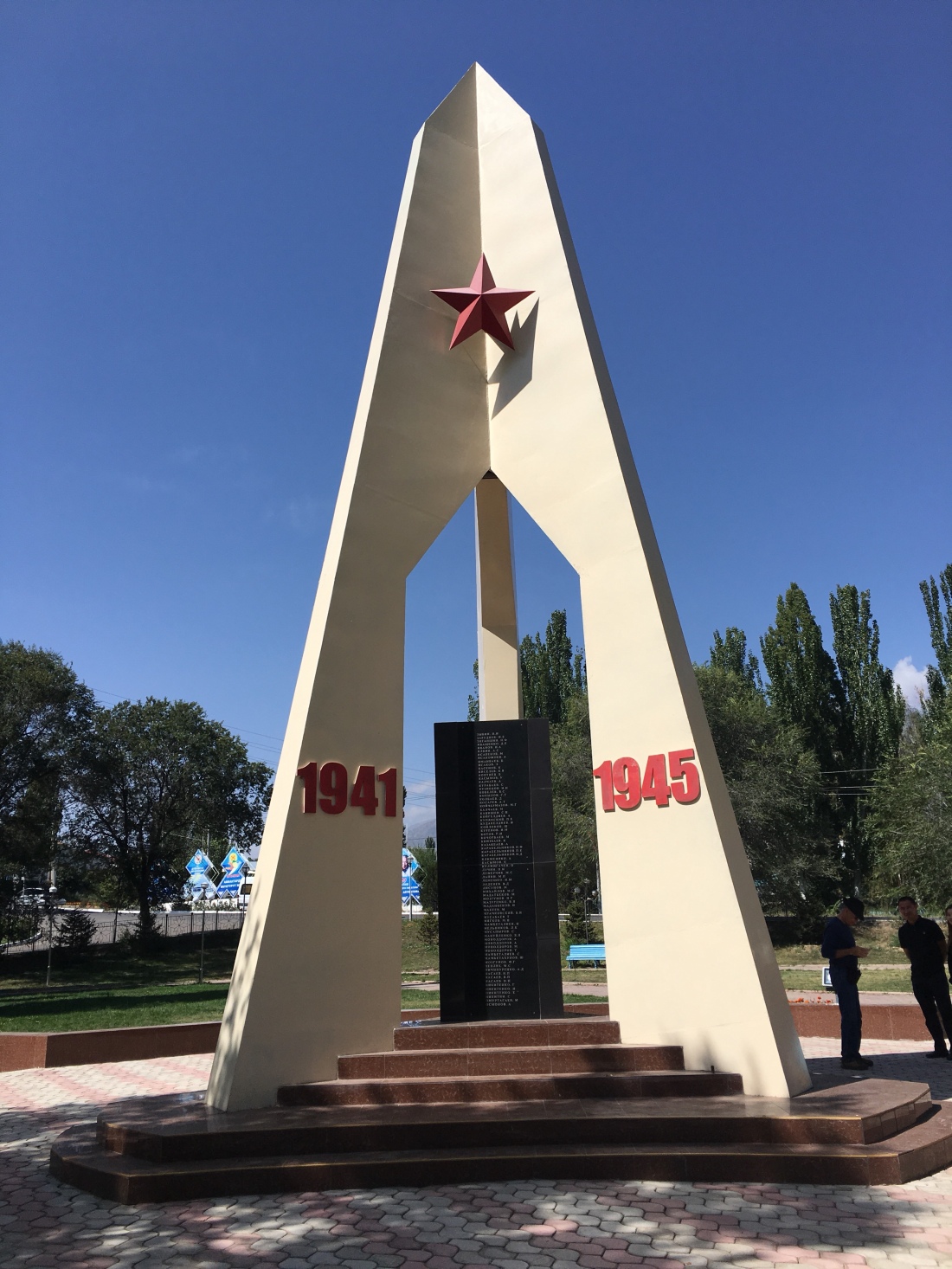 By this time, it was time to return for the USA Kok-boru match. I described the USA – Kyrgyzstan match earlier (see “Game On!”,) so I won’t again, but we had a great time, cheering for the USA and enjoying the friendly spirit of the World Nomad Games.

The Kyrgyzstan group responsible for organizing the WNG made this their official philosophy in planning the games:

“It is a pleasure to welcome you in the III World Nomad Games!

The III World Nomad Games – the largest international project of the Kyrgyz Republic, where the games aimed at developing of ethnic and cultural movement in the world as a heritage of human civilization.

We wish to spend time with great benefit and pleasure, let our hospitality fill you with new forces, energy, bright impressions and positive emotions.

The Secretariat for Preparation and Holding the III World Nomad Games.”