From September 2 through September 8, Kyrgyzstan hosted the World Nomad Games in Cholpon-Ata, along the shore of Lake Issy-Kol, which is the world’s 2nd largest alpine lake. The first WNG were held in 2014, then again in 2016. These were the third games, all hosted by Kyrgyzstan.

In this modern age of security, it was difficult for the average person to move around Cholpon-Ata on the first day. Five presidents, including President Erdogan of Turkey and President Jeenbekov of Kyrgyzstan, were attending the opening events. The Kyrgyzstan police cleared the roads of traffic and made pedestrians move away from the roadside. We waited a while, and then groups of mostly black cars came speeding (and I mean speeding) through on their way to the stadium.

“Kok-boru” was the game of the day in the Hippodrome, a large arena designed for horse events. Kok-boru is a game played with a dead goat or sheep. It is a traditional game whose roots are in the days when Kyrgyz nomads herded animals on their pastures and had to defend them from wolves. As played traditionally, it was fairly free-form. For purposes of the WNG, there are official rules and a referee.

The sheep is dead, the head has been cut off and the wound bound up with black cloth. The legs are still attached, also wrapped in black cloth. Both teams have a goal, which is like a giant stabilized tub, about ten feet in diameter. It is big enough to hold the sheep and a rider, as it turned out. Everyone, including the referee, is on horseback.

The sheep was placed inside a circle in the middle of the arena, with the riders gathered around the circle. At the signal, they all try to get a hold of the sheep carcass, which means leaning down from their horse to grasp it. Horses push forward to get closer so their rider can get a grip, everyone in very close quarters, riders and horses pushing each other.

The crowd waits anxiously to see who and which team successfully grabs the carcass. Someone finally gets it and rides out toward their goal, as the crowd cheers him on. The carcass has to be passed at least one time, from player to teammate, before it can be tossed into the goal. Riders on the same team try to keep the opposing team riders from grabbing the carcass away. The rider with the carcass has only one hand free for guiding the horse, and sometimes no hands for guiding because the carcass is heavy, averaging about 60 kg, or about 132 pounds. 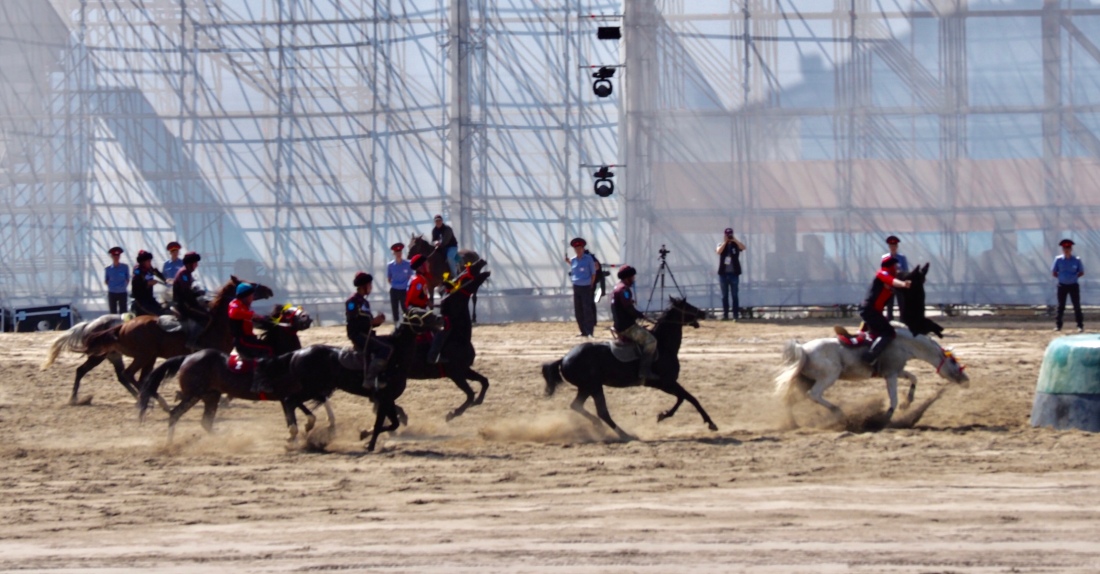 The Kazakhstan team is about to score.

Successfully scoring meant throwing the carcass into the goal. Because the carcass was heavy, sometimes it didn’t make it into the goal and it fell down beside the goal. Again, riders and horses fought to grab the carcass in order to re-throw it or to gallop off to the other goal, depending on who got possession.

When a foul was called, the carcass was placed in another circle, one on each side, between the goal and the middle circle where the game started. One rider from each team would try to grab the carcass for their team, and action would resume. The crowd cheered and applauded for their team.

There was a team from the USA! I hadn’t seen the U.S. listed among the participants, but I was pleasantly surprised to find that we had a kok-boru team! Who knew? We didn’t do well, but the audience cheered and applauded, and not just the Americans, because the Kyrgyz people are nothing but friendly and hospitable. 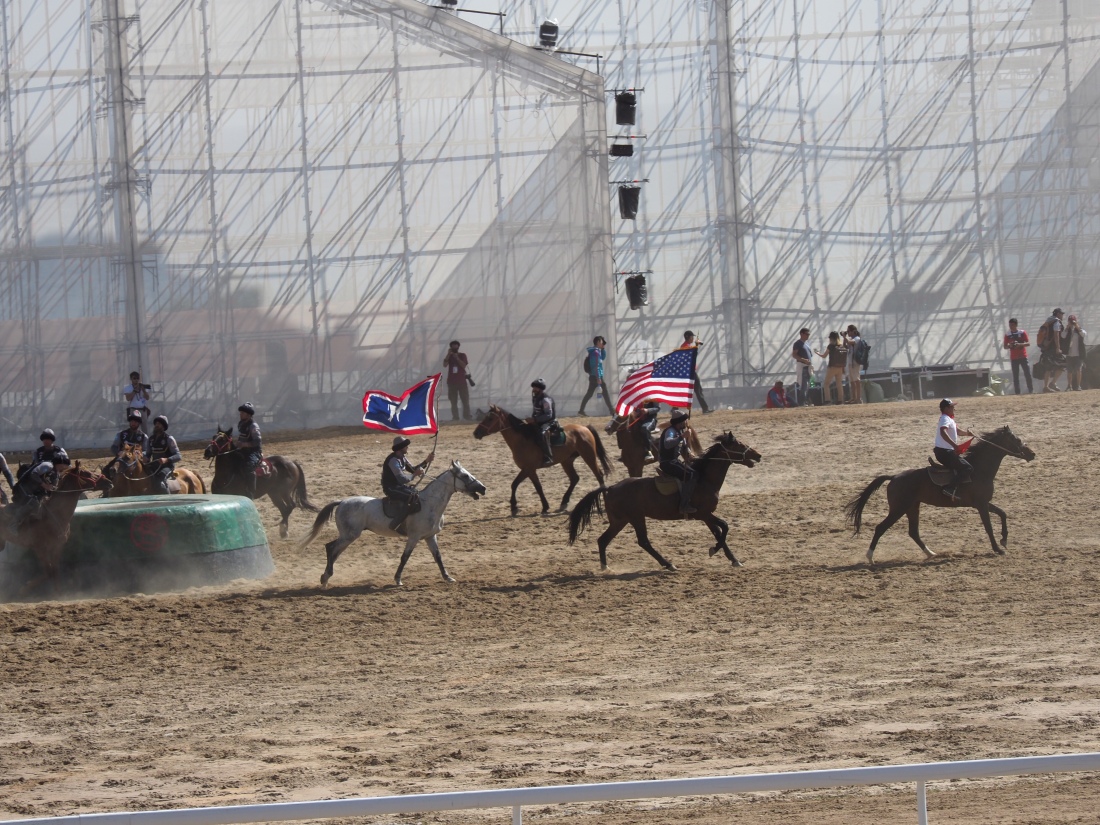 That’s the Wyoming State flag behind the Stars and Stripes, which is the team’s home state.

Gladd Howell was the big scorer for the U.S., scoring five of our seven goals when we played against Kyrgyzstan, but on four of those goals, he fell in over the head of his horse! Both rider and carcass were in the tub, and the crowd had a good-natured laugh over it.

(When the USA team had possession, the music over the loudspeaker changed from traditional music to the theme from “Hang ’em High.”)

After the game, the sheep carcass is barbecued and eaten by the winning team members, who often invite their opponents to share the meal. The spirit of the games is to bring people together, and everything about the games is conducted that way. It was refreshing and inspiring.