I left Tampa at 2:15 p.m. on August 27th, Monday. I arrived in Bishkek at 5:30 a.m. on August 29th, Wednesday. It was a long travail, but because I booked on very short notice, the fare was half what I was going to be paying originally, so that helped ease the fatigue.

I spent most of August 29th sleeping like a rock, but around 5:00 p.m. I received a phone call from the sister of a friend of a friend from Whidbey Island who wanted to give me a tour of Bishkek. I have learned that world travel is filled with serendipity, and interesting things happen when you play along.

Her name is Aiperi, which is a traditional Kyrgyz name, and she is a tour guide by profession. She was fitting me in between tour sessions with her group of Indian tourists, so I had to be ready “asap.” And so I was. Aiperi is a very energetic 23 years old, a new university graduate (majored in journalism and would like to go into TV news,) and a charming tour guide. 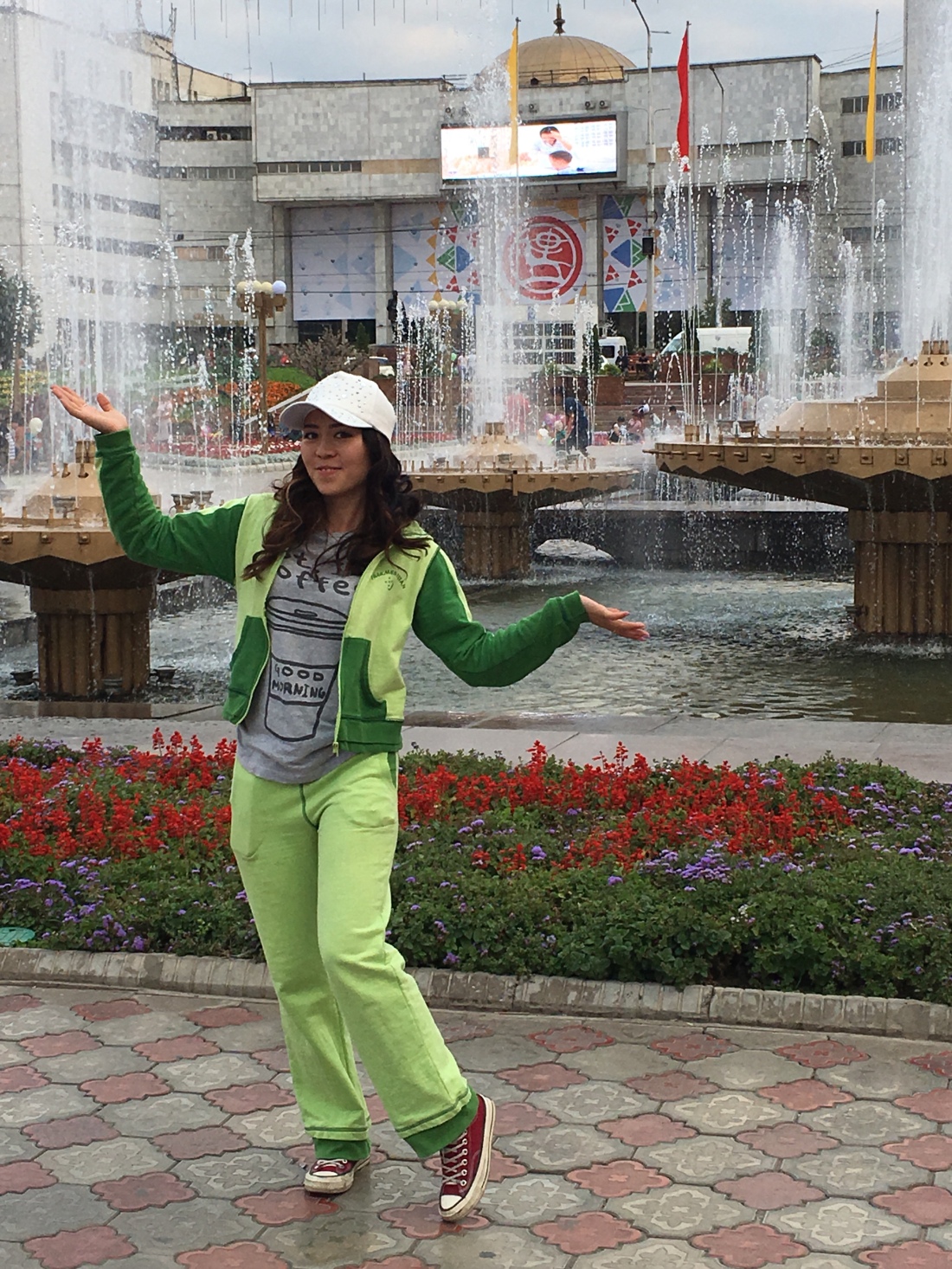 This square, with Aiperi standing in front of it, is across the street from the temporary stage (see below.)

Bishkek is a city of about a million people. It is in the Chu River valley near the Kyrgyz Mountains at an elevation of about 2,500 feet. Between 1926 and 1991, during the Soviet period, the city was called Frunze, after Mikhail Vasilyevich Frunze, a revolutionary and Red Army leader (“Father of the Red Army”) who was born in Kyrgyzstan, but in 1991 it became Bishkek again.

It is still summer and hot during the day. Aiperi took me down Chuy Street, a main roadway through Bishkek. The main roads are broad, with trees and some have planting strips in the middle in an almost-European style. There is very little jay-walking and a lot of taxis and private cars, and the traffic is busy, but not crazy. In the downtown area where we were, there are a lot of shops and restaurants along Chuy Street, concentrated in a few blocks. The downtown area also has a number of parks, monuments, museums, and government buildings. Bishkek is home to the Academy of Sciences (founded 1954,) the Kyrgyz State University (founded 1951,) and multiple institutes that provide advanced training for agriculture, medical, polytechnics, and teachers. Aiperi graduated from the Kyrgyz State University.

Along Chuy Street is Kyrgyzstan’s government building. Note that I use the singular “building.” It is a very large building, about six stories tall, taking up an entire city block, but it is one building, housing the President and all of the government’s offices. It is faced with white marble or marble-like stone, and called “The White House.” 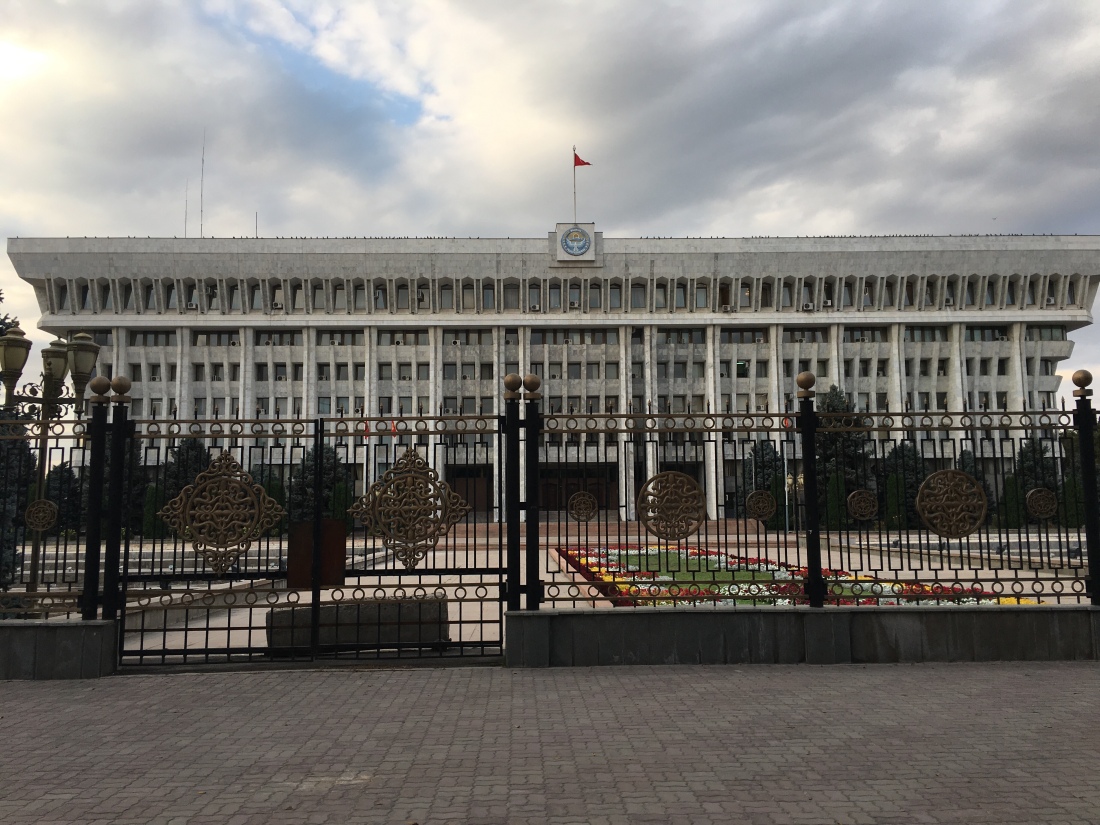 The National Museum is, sadly, closed for renovations, so I will not be able to visit it, but it turned out that I had arrived in time for Kyrgyzstan’s Independence Day on August 31st. The public squares where the Museum is located were filled with decorations and a temporary stage where celebrations and entertainment would be held.

You will notice in the middle photo above, that Kyrgyzstan uses the Cyrillic alphabet. In a visit to Ukraine, I learned the sounds for most of the alphabet, and the most challenging thing about it was that some letters that look like the Latin alphabet have different sounds associated with them when they are part of the Cyrillic alphabet. For instance, the “A” sounds the same way in Cyrillic as in Latin, but the “C” represents an “S” sound. The third letter is a Greek Gamma, and represents a “G” sound in Cyrillic. The word under the “31” is “August.”

Aiperi and I walked through some of the parks, which are lovely and very popular with the residents of Bishkek. Families came out to simply spend time in the warm evening – kids would ride their bicycles or scooters or run around on the grass. The grownups would stroll or sit on the many benches.

Wi-fi is common in restaurants and hotels, but there is the same problem with keeping your phone charged. Aiperi and I stopped at a small cafe so that she could re-charge her phone and we could have tea. My energy level was flagging despite having slept all day, so after tea, we returned to my hotel and said goodbye. I am looking forward to spending more time with Aiperi when I return to Bishkek.

The next day, my main mission was finding an ATM that worked with my cards. The first two ATMs that I had tried in the airport had refused my MasterCard. In the U.S., wherever there is VISA, there is MasterCard, but that’s not true everywhere, I have discovered, so when you travel overseas, have both. I had both, but the VISA card was buried in my bag at the time. It took awhile, but I did find an ATM that worked with my MasterCard (and when I got to Cholpon-Ata, I found a bank that took either one.) Whew!

Having solved the cash problem, I went to explore the Osh Bazaar in Bishkek. It was a large place, very busy, filled with souvenirs and ready-to-eat food in the outside stalls. As I walked further in, there were booths with “daily life” goods, and I bought a backup charger for my phone and iPad. There were stands selling chicken, sheep, and goat meat, cut to order. Endless booths with vegetables, fruits, and things made from vegetables and fruit – pickled or sweetened. Nuts, spices, and dates – I hadn’t had any dates for months! It was a great way to finish this chapter of Bishkek.