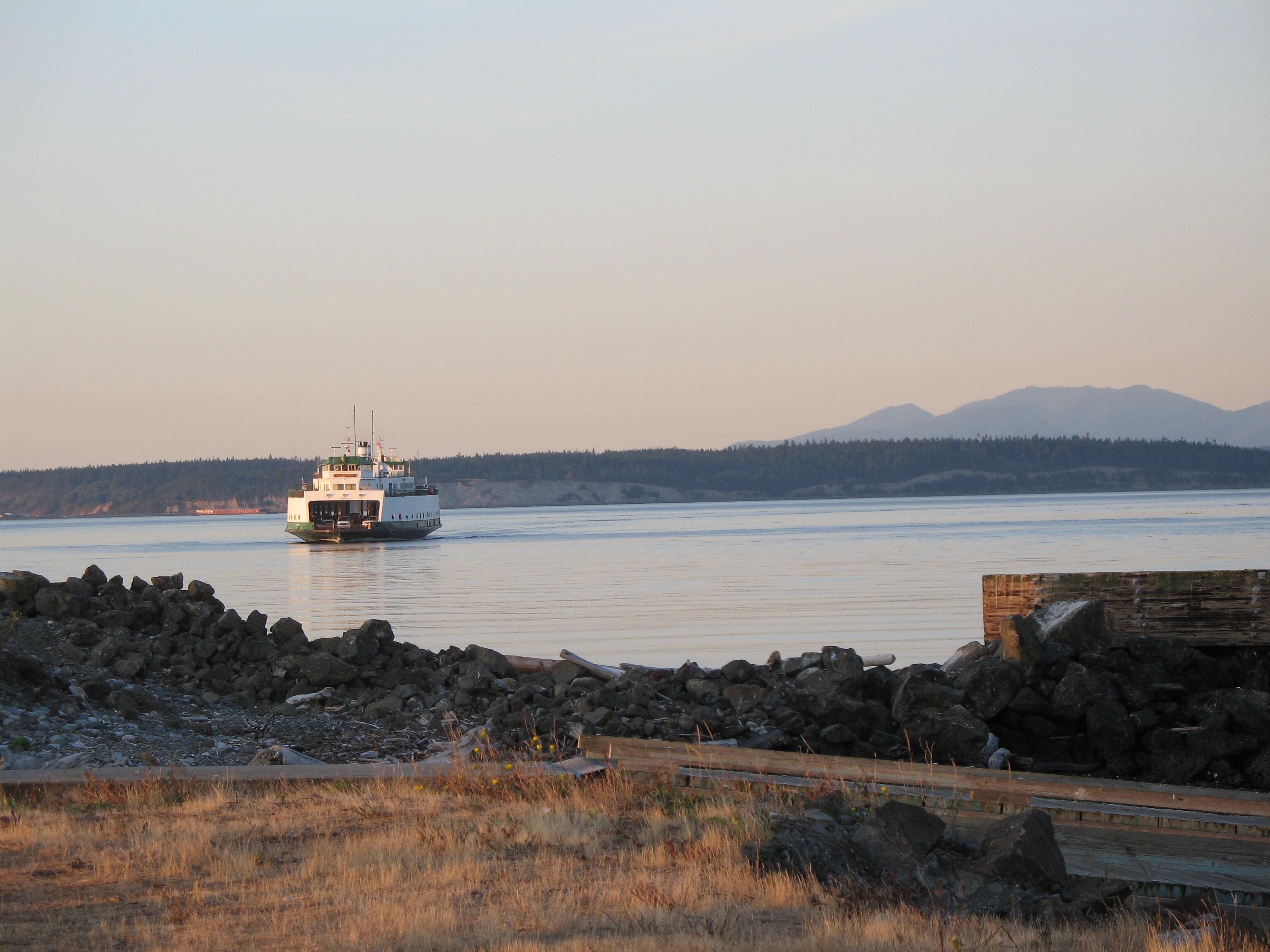 Seattle’s reputation for being rainy and cloudy much of the time is well-earned, but Whidbey lies in the rain shadow of the Olympic Peninsula, and, surprisingly, has more days of good flying weather for Navy pilots than Arizona.

The population is an educated guess. Whidbey Island and Camano Island are the islands that comprise Island County, whose population was fast approaching eighty thousand in 2007, when I moved from Whidbey to upstate New York. This summer, 2018, was the first time I returned to visit the state I called home for twenty-eight years, twenty-three of them on Whidbey Island.

When I moved there in 1984, Island County’s population was thirty-five thousand. It was a rural place with active farms and saw mills, but the friction between “old Whidbey” and “new Whidbey” was already well-developed. Old farming families whose farms faced the water were complaining about property taxes that reflected higher and higher valuations because they were “waterfront.” Prosperous Seattleites had discovered cheap (by comparison) waterfront, reasonably close, on Whidbey Island. Californians escaping smog and high taxes piled on. I had moved to Whidbey from Vashon Island, an island further south, that had suffered the same problem years earlier.

Whidbey Island is still a lovely place. The commercial dairy and crop farms have disappeared, replaced by boutique farms – smaller, more specialized – but it has not become suburbanized in the way that the Seattle area has. Beaches are uncrowded and accessible, large parks still exist, and conservation areas were created to preserve open space and views.

One of the most beautiful places on Earth is just outside of Coupeville: Ebey’s Prairie. Sunnyside Cemetery sits on a hillside overlooking the Prairie, and on a clear day (August through October,) you can take in the panorama of the open prairie with two or three farm houses, set against the blue Puget Sound water, and beyond that the snowy peaks of the Olympic Mountains on the Peninsula. When I think of Whidbey Island, I close my eyes and conjure this vision, recalling the smell of the salt water, the sound of seagulls and eagles, and the blare of the ferryboat’s horn as it approaches the dock. Even though you can’t see the boat from Ebey’s Prairie, you know it’s nearby. 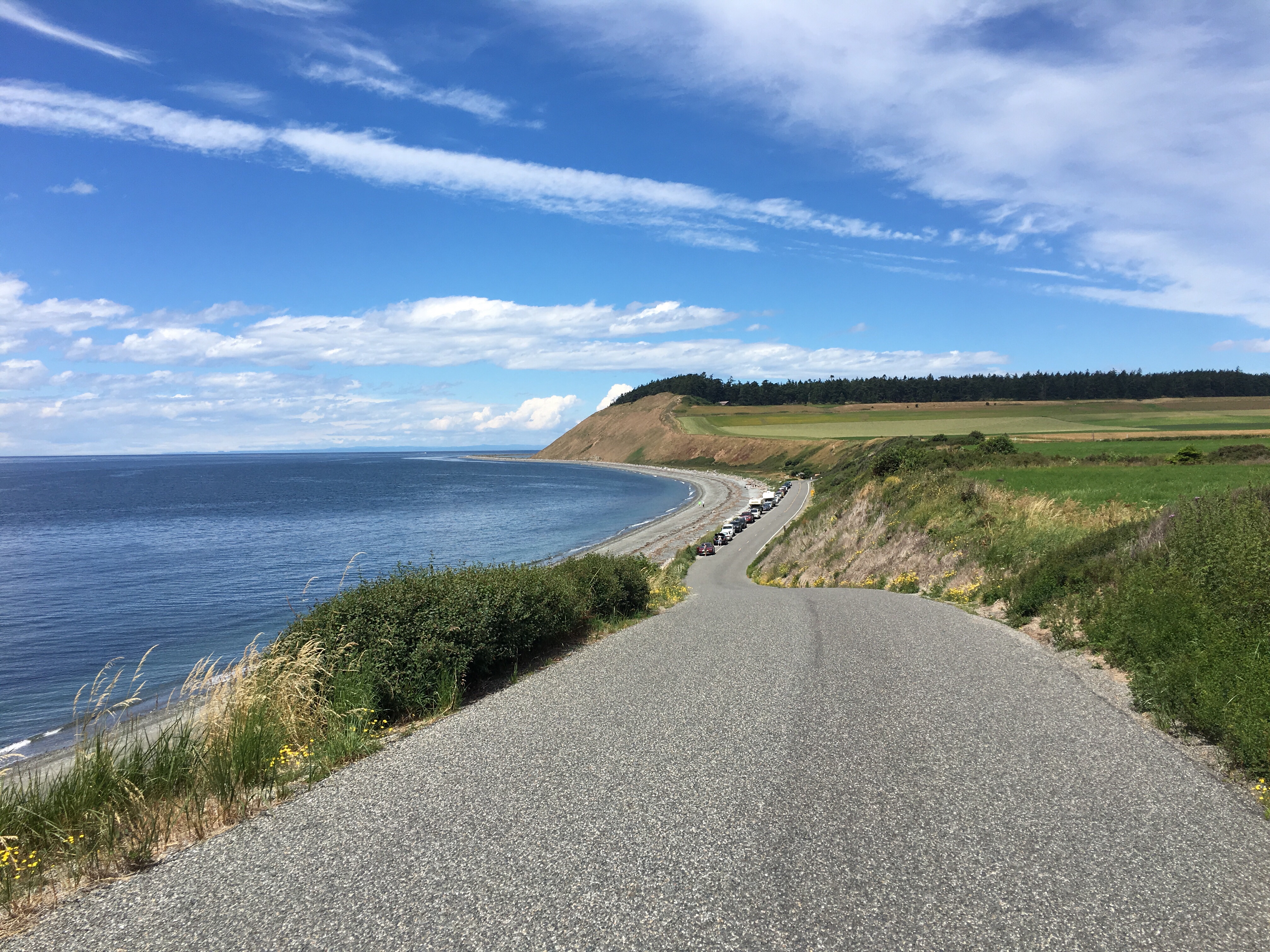 Ebey’s Prairie stretches to the right, Puget Sound waterway on the left. 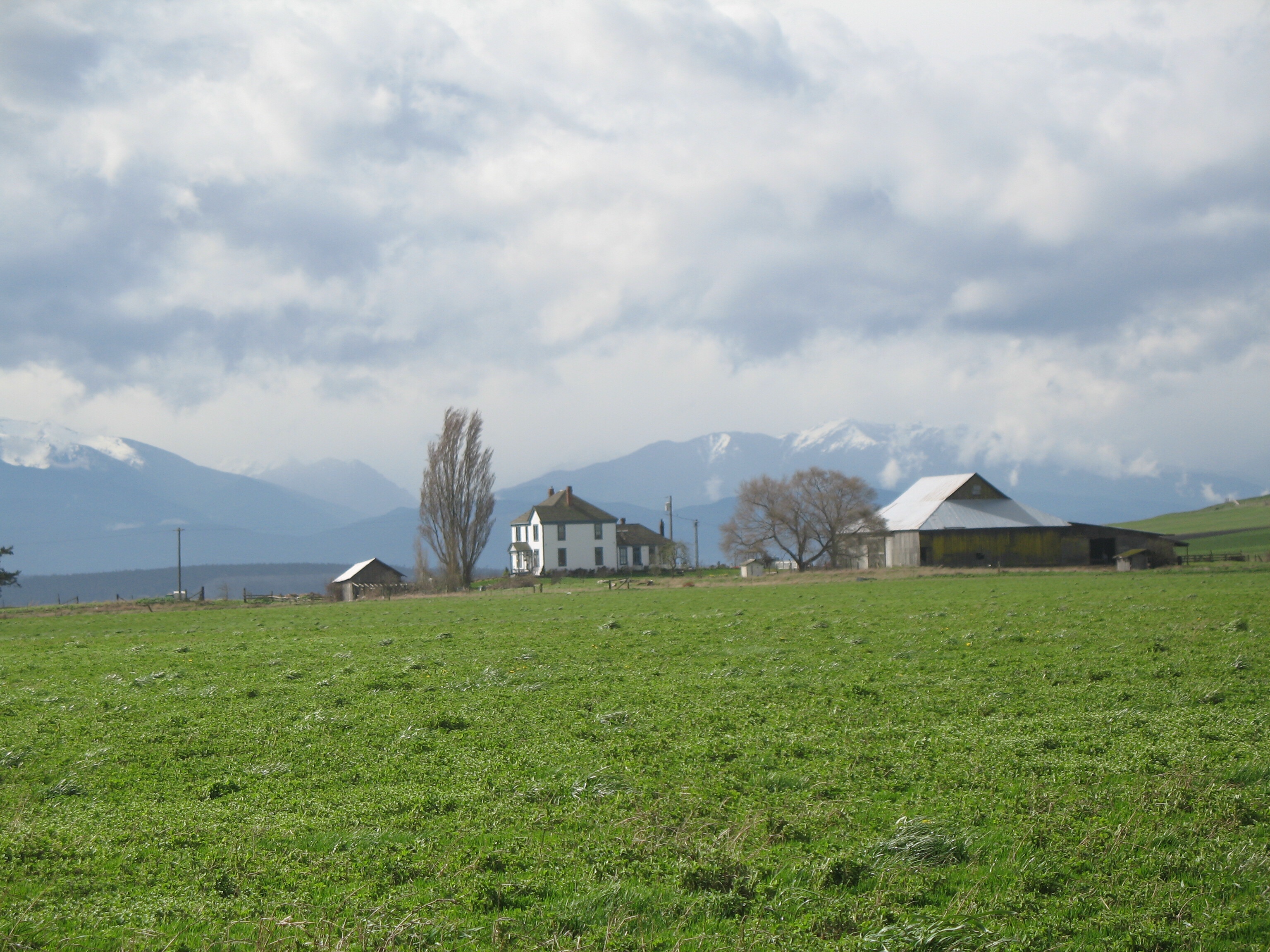 The Smith Farm on Ebey’s Prairie. 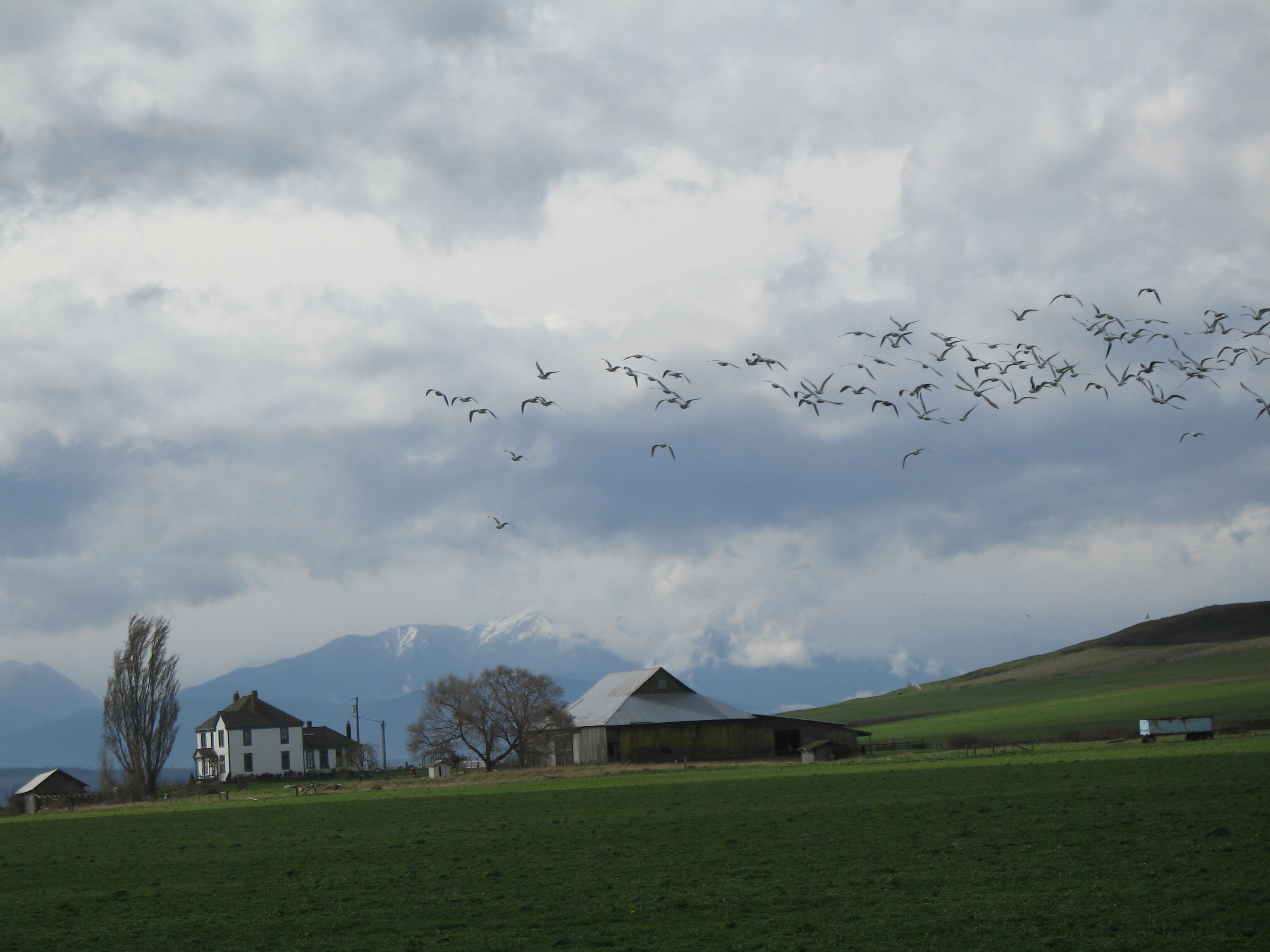 Coupeville, on the shore of Penn Cove, became home to 18th century sea captains and Sunnyside Cemetery is the resting place for these early settlers with names like Crockett, Hancock, Ebey, and Alexander. A direct descendant of John Hancock, who signed the Declaration of Independence, lives nearby. I have often wondered if I am related to this John Alexander. 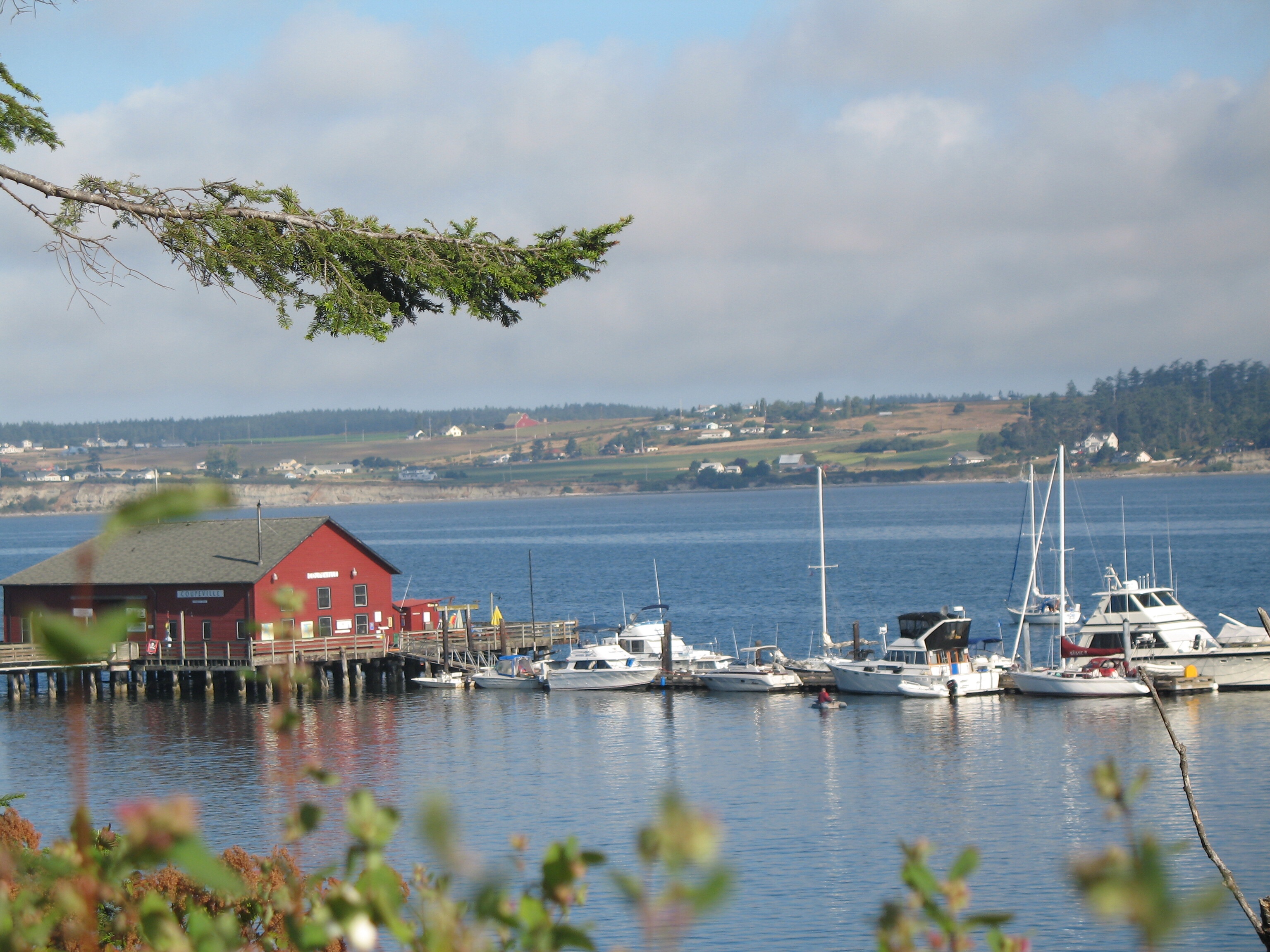 Langley, “a Village by the Sea,” is on South Whidbey. It’s filled with fine hotels (Inn at Langley,) the Whidbey Island Center for the Arts, several art galleries, and upscale shops. I was invited to tour a local artist’s sculpture garden while I was there. It’s about twenty acres with finished and unfinished works by Henry (“Hank”) Nelson. There are several local artists with national reputations, and authors, too – Pete Dexter and Elizabeth George among them.

“The Classic Road phone booth,” situated at the intersection of Highway 525 and Classic Road, marks the local residents’ unofficial boundary between South Whidbey and the rest of the island. There’s still a phone in it and it still works – the advantage of having a local phone company whose owner is passionate about Whidbey Island. George’s family has been here for generations. A few years ago, the WDOT wanted to widen the highway, removing the landmark booth in the process. Residents protested so vehemently that WDOT and Whidbey Telephone relocated the booth to the new edge of the highway.

The character of the island has changed. It has become more sophisticated, save one thing: people still know their neighbors and talk to strangers in the grocery stores. I could always tell a person from “off-island.” They wouldn’t make eye contact. In a world increasingly separated by smartphones, Whidbey Island remains an oasis worth visiting to remember.

View from Coupeville area toward the Olympic Peninsula.

The oldest house on Ebey’s Prairie.

One thought on “Whidbey Island”