“Sculptural” is a word that comes to me when I drive through Arizona. The variety of rocks and plants are shaped by the wind and sand and temperatures, and the landscape is unique to Arizona. There is a wide range of environments, and we saw several as we drove from Casa Grande to Tucson, and up Mount Lemmon.

Saguaro cactus (pronounced sa-war-o kaktis) grow almost exclusively in Arizona, in an area bounded by upper and lower altitude levels. When driving through Arizona mountains, you will find that these cactus appear suddenly and disappear suddenly when you hit these lower and upper altitudes. The upper boundary is just shy of 4,000 feet above sea level. There is a small stretch of the saguaro “forest” in Mexico, just south of the Arizona border, but it is otherwise contained entirely in Arizona. 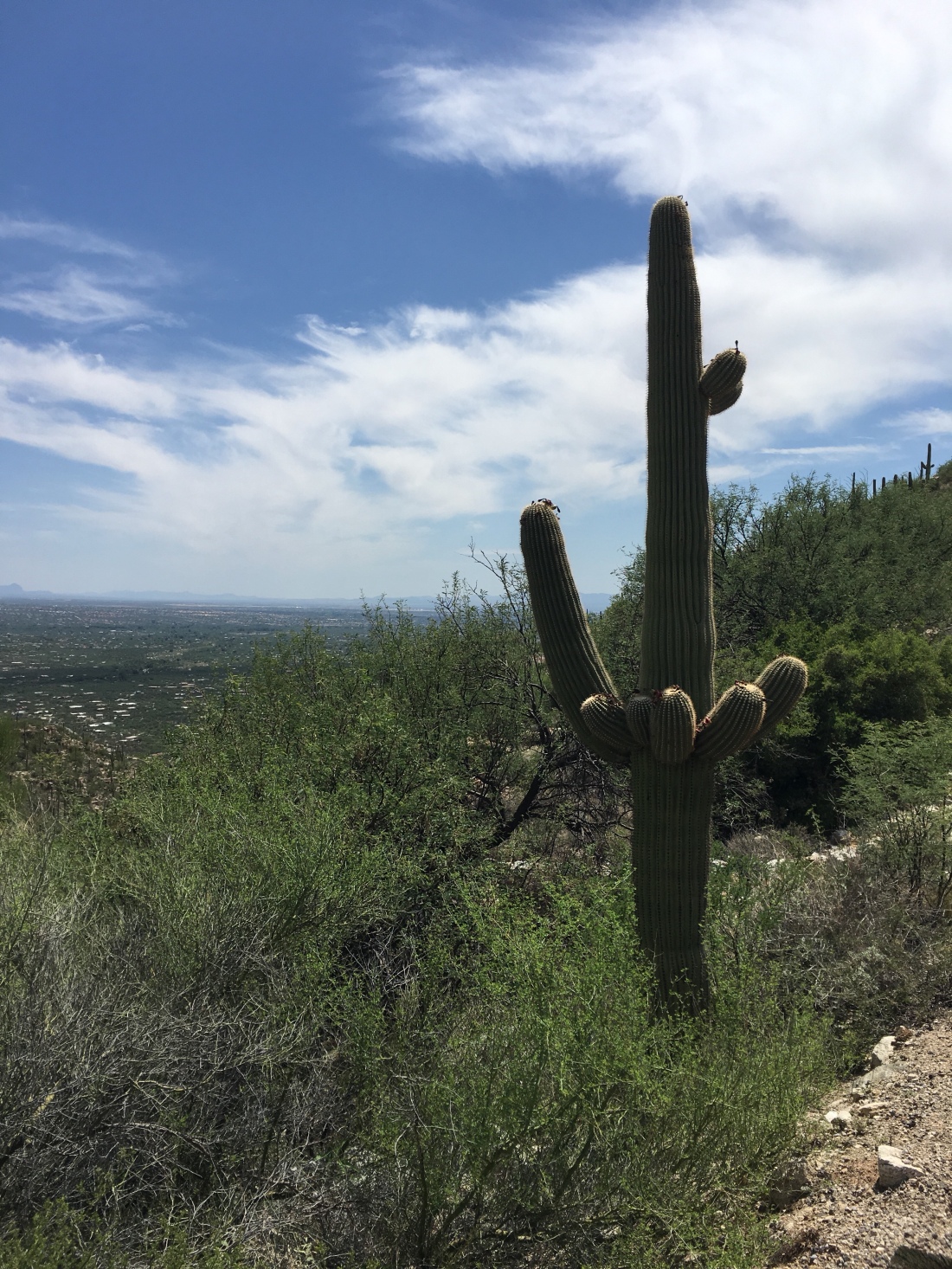 In the southwestern part of Arizona, the basic “geologic profile,” meaning general description of the landscape, is called “basin and range.” There are large, flat areas surrounded by mountains. The highest of the mountains in this area are about 10,000 feet, which turns out to be high enough to have snow and snow-skiing. Not something I had expected in Arizona!

Arizona’s scenery is mainly the result of 1.8 billion years of geologic activity. The Grand Canyon and the Petrified Forest National Parks, the red rocks of Sedona, Monument Valley, and Canyon de Chelly, were formed by geologic activity. (These are not pictured here, but are well-known within the United States.) Arizona is home to sixteen national monuments, more than any other state. If you are a serious scholar of geology, you will visit Arizona!

Copper is the mineral for which Arizona is best known. Sixty percent of the copper mined in the U.S. comes from Arizona, and the deposits are so large that it is often termed a world resource.

“Bedded salt” deposits (NaCl) in Arizona are the thickest and youngest in North America. In northwestern Arizona, in the Pinta Dome, sits the only known helium field in the world where non-fuel gas is extracted. Helium and nitrogen are both pulled from this field, whereas helium is a small by-product of natural gas fields elsewhere.

The Picacho Basin in south central Arizona has the thickest “anhydride sequence” in the U.S.. Anhydrite is a gypsum-like material produced by evaporating water. (You remember from reading about the Museum of Natural History that Arizona was once covered by a sea, right?) The sequence is about 90% anhydrite and 10% shale.

The surface water also seeped into the basin cracks and porous rocks, producing large underground reservoirs of water that supported, literally it turns out, about 94% of Arizona’s population for many years. The groundwater, over these millions of years, became part of the support structure of the basin surface. As these reservoirs were pumped, it weakened the surface soil structure and has resulted in some subsiding of the surface. In addition, the Colorado River has been tapped to support both Arizona and Southern California’s water needs, and the river is much lower now. Water will always be a concerning issue in the southwest United States.

As we drove higher into the mountains, the saguaro cactus disappeared, and conifers and deciduous trees appeared.

Summerhaven is a village close to the ski area. The population is higher in summer than winter, but there are year-round residents. Summerhaven is about 20F degrees cooler than the temperature at the base of the mountain, so it is a popular place during the summer heat.

Near the top of the mountain, Mount Lemmon, we visited the ski area. The map on the side of the building shows the winter ski routes. The ski area receives about 200 inches (508cm) of snow annually.

The ski lift was open for people to take a ride to the top for the view, and there is the Ironwood Restaurant across the road that is open year-round, and serves good food.

“Quaking aspen” are one of the native trees that grows above 6,000 feet in Arizona. Others are blue spruce, Ponderosa pine, white fir, and a relative of the maple. The wide range of climate, from below sea level to 10,000 feet gives Arizona a very diverse collection of plant life.

The Ironwood Restaurant has indoor and outdoor seating areas, and it was fun to watch the hummingbirds zip in and out of the feeders as we sat outside enjoying the shade. In the high altitude, the air was actually cool, in the low 70s (Fahrenheit,) compared to the lower elevations, which were about 100F on the day we visited.

Mount Lemmon’s elevation is 9,159 feet (2,792 meters) and is the highest point in the Santa Catalina Mountains. It is named for a botanist, Sara Plummer Lemmon, who climbed to the top with her husband and a local rancher in 1881.