The Arizona Museum of Natural History in Mesa, AZ, is designed to excite the imagination of kids, whether the kids are aged 4 or 94. Visitors are greeted by the sight of a Tyrannosaurus Rex breaking through the exterior wall of the Museum: 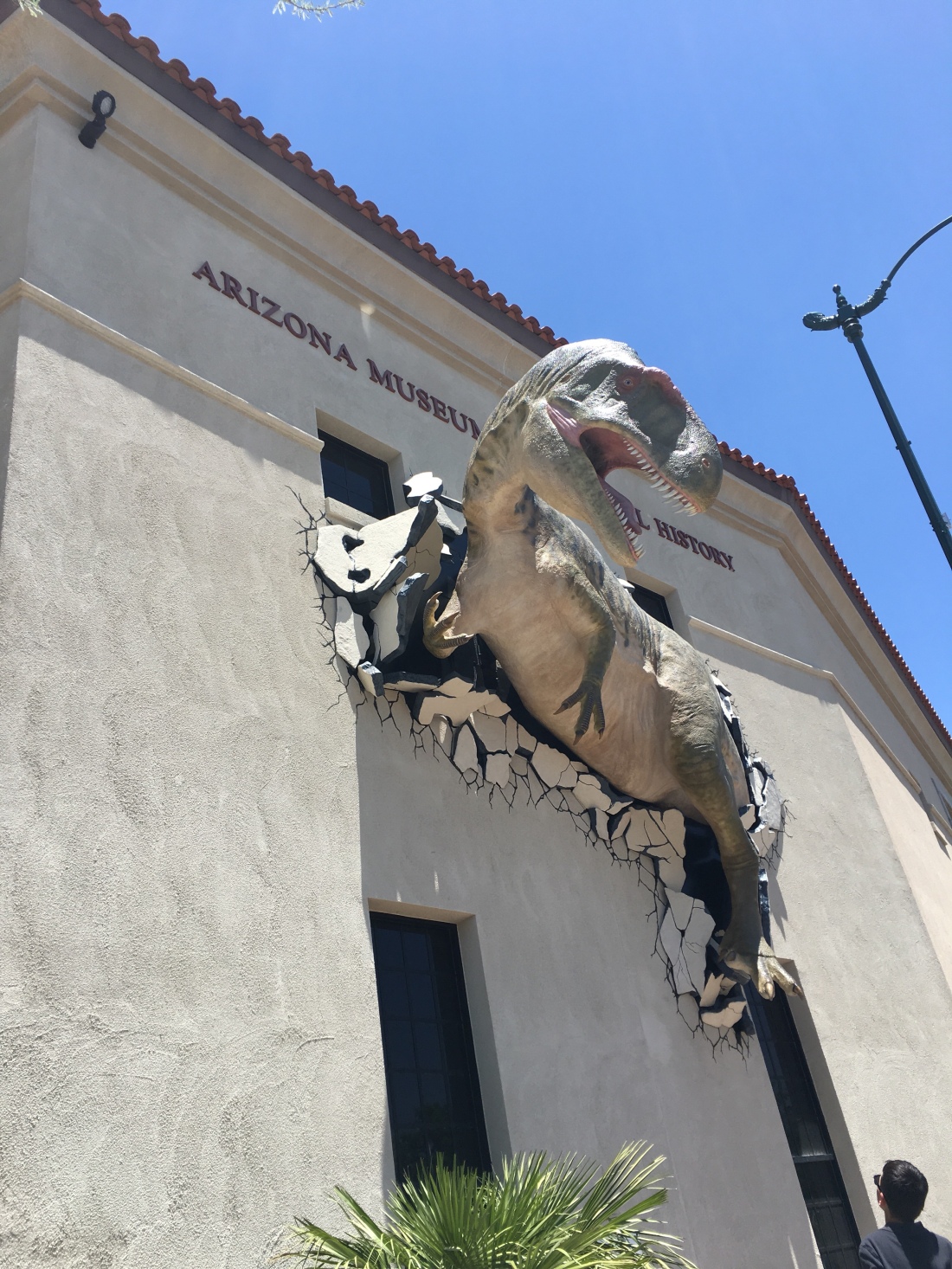 Dinosaur tracks lead to the entrance. Opening the front door and entering brings you face-to-face with this:

Turning toward the first exhibit room:

When I was a kid in California, I had plastic dinosaurs that I built jungles for in the back yard, and I used to know all their names. The names have changed somewhat as scientists have learned more about these early inhabitants of Earth, but by any other name, they are still fascinating.

It isn’t only about dinosaurs. This museum, with clear explanations in understandable increments, explains a lot about the Earth. It begins with the emptiness of space, describes the emergence of the universe, solar system, and Earth, which brings visitors to an excellent display of rocks and minerals. Progressively, these displays tie the Earth’s geologic history directly to what kids can see around them in Arizona, which is a treasure trove of fossils and minerals. It used to be under water!

So far, over 4,000 separate minerals have been identified on the Earth, and 809 of these can be found in Arizona. These numbers continue to grow as more minerals are discovered.

There is so much variety because minerals are made up of different combinations of elements (as in the Periodical Table of Elements,) a list which is also growing. Elements such as potassium, copper, and oxygen are part of the basic structure of the Earth. These elements become heated, and release, recombine, and are relocated by the physical forces that shape the planet, resulting in these many minerals.

“Minerals form when conditions are better for mineral formation than for rock formation. When the temperature, pressure, ‘chemical soup,’ and space are right, minerals will separate out, cool, and grow into crystals. If they remain in a protected environment, like the interior of a geode, they will retain their beautiful bright colors and interesting shapes. If conditions change, they may rust or disintegrate and re-combine to become different minerals or new rock.” Malachite is partly copper, which was abundant in Arizona and mined for decades, so it’s not surprising that malachite is found in Arizona, too. 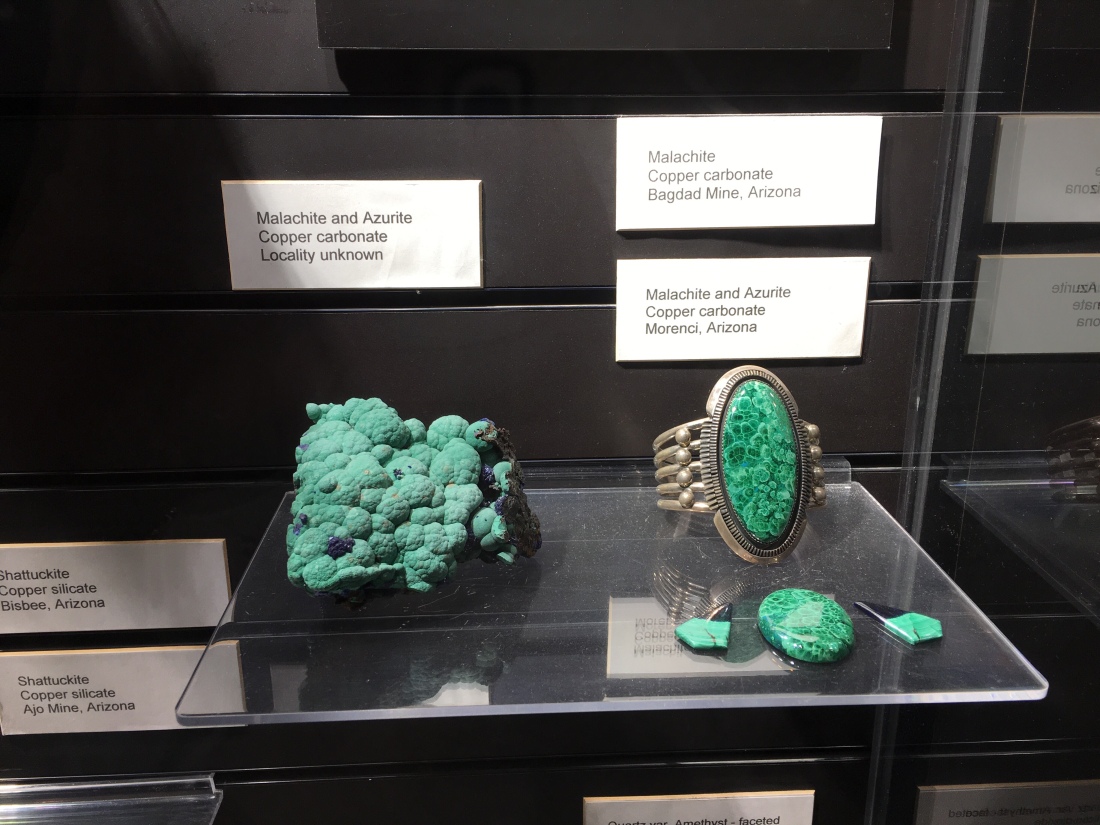 What makes a “rock” different from a “mineral?” The general answer is that rocks are made up of minerals. Granite is a combination of quartz, feldspar, mica, and often hornblende.

Minerals may be only one element, such as gold, or many elements. Minerals have many different characteristics, such as the way it breaks and its crystal structure.

Quartz is a common mineral, and occurs by itself or within rocks like granite. It is common because it is made up of silicon and oxygen, and these two elements make up about 75% of the Earth’s crust. The chemical formula for quartz is SiO2 (that should be a sub-2, but I don’t know how to do that on my keyboard,) one part silicon and two parts oxygen. Quartz is made up of six-sided crystals, and does not have a regular pattern of cleavage. It tends to break unevenly.

Other minerals that combine with quartz in granite have different chemical formulas and characteristics, so defining and describing a mineral or a rock ultimately requires both chemistry and physics. 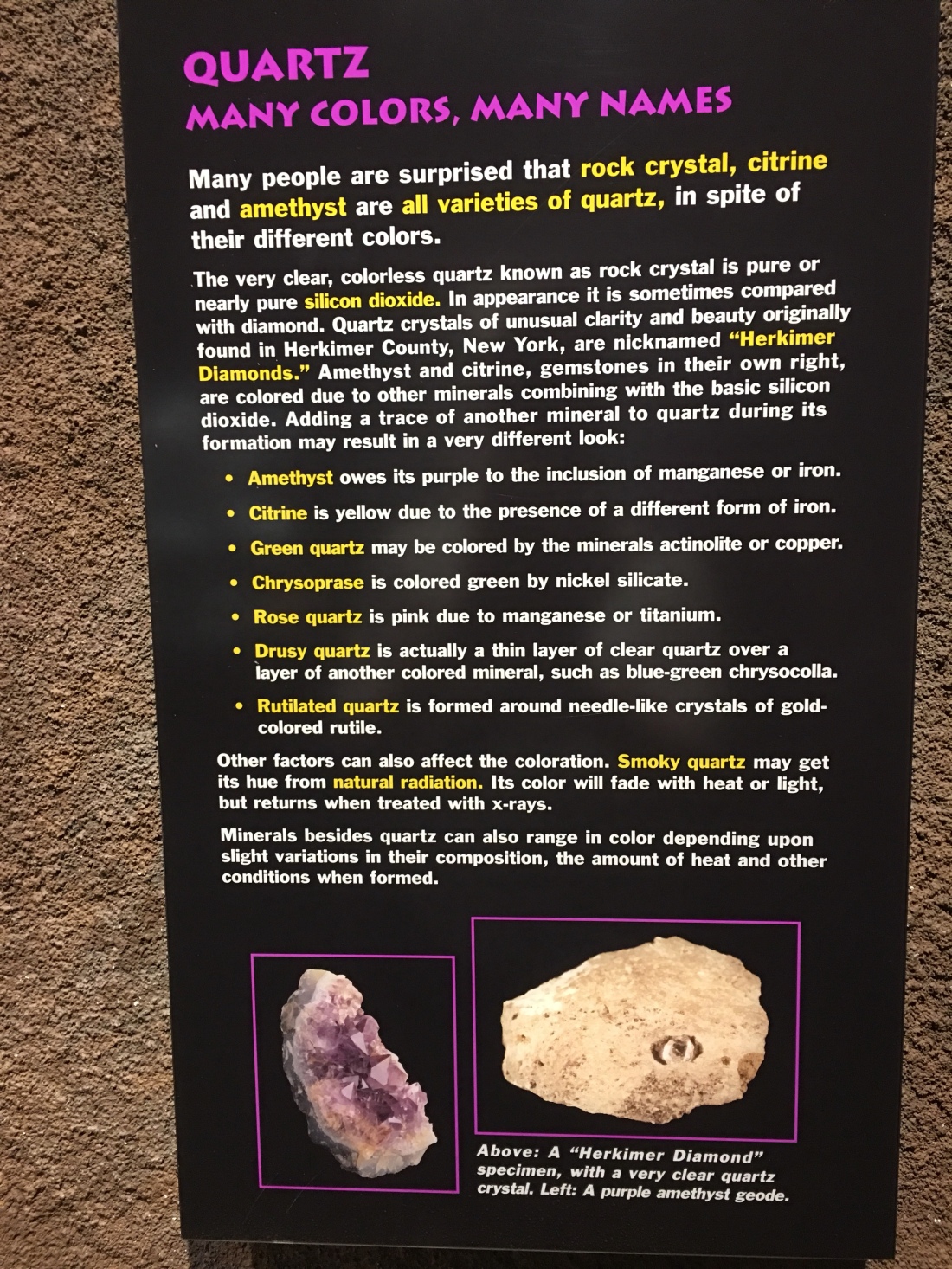 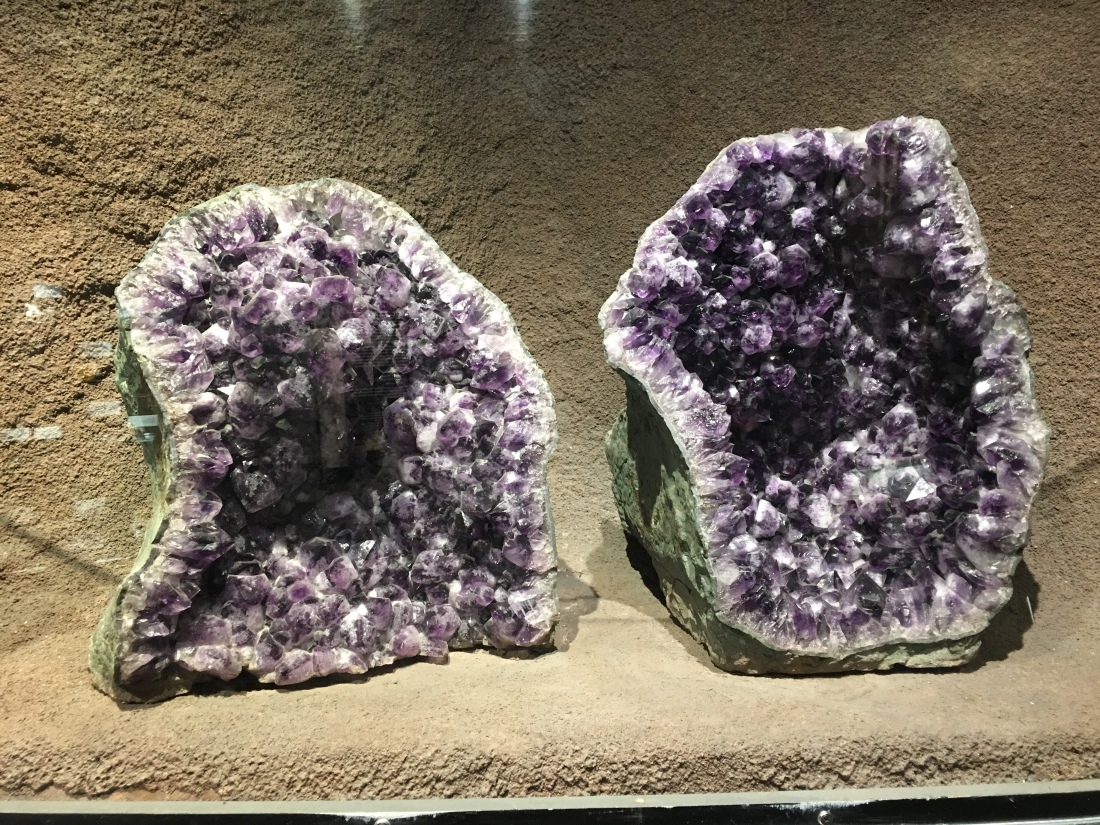 Further on, near a diorama of dinosaurs layered according to their appearance/disappearance on Earth, there was an explanation of how oxygen built up in our atmosphere.

The oxygen in the air that we breathe did not exist until photosynthesis evolved. Photosynthesis is the process where plants absorb carbon dioxide and expel free oxygen, and it is this process that allowed oxygen to accumulate in the atmosphere. Plants allow us to breathe.

Scientists know this occurred because of iron formations that have been discovered in layers of rock between 2.2 and 1.8 billion years ago. Enough free oxygen existed to produce iron oxide on a seasonal basis, and these red bands alternate with grey bands of iron-poor rock.

Eukaryotic cells are organisms that have both an organized nucleus that contains genetic material and “organelles,” which are sub-cellular “organs” of the eukaryotic cell.

Eukaryotic cells advanced life on Earth from simple reproduction of cells to cells that shared and passed on genetic material. This made it possible to pass traits and characteristics from two separate cells to a new cell that combined these traits, instead of simply replicating what had gone on before.

Sometimes cells would divide, but they failed to separate. These were the first multi-cellular organisms, which eventually developed cells that performed specific functions.

Cells combined, cells divided, and cells separated or failed to separate. And so we have life as we know it today.

In case you are wondering, it went generally like this: 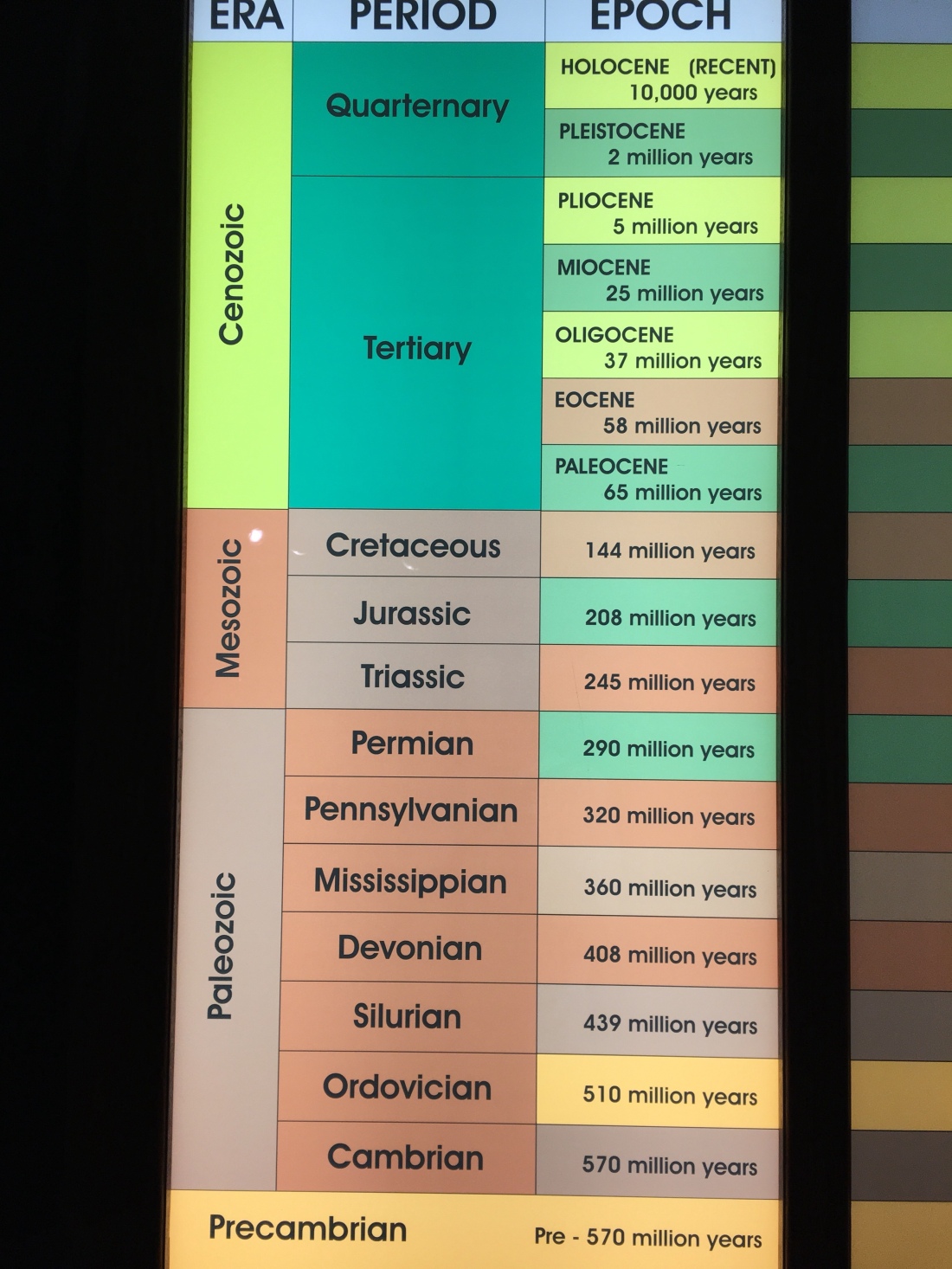 So, if you go to see “Jurassic World,” you will know that it’s referring to life on Earth about 208 million years ago, in the Mesozoic Era.

One more dinosaur, not a Tyrannosaurus Rex, but a relative, that lived in Arizona.

The museum also had good displays on life in Arizona hundreds of years ago, the Hohokam culture, the conquest of the tribes by the Spanish, and life in the Old West. There is an installation of an early Mesa, AZ, jail if you need a good reason to stay out of jail.

But naturally, the kids and their grown-ups get more excited about panning for gold and finding “gold.” (It’s pyrite.) And, it’s playing in water on a hot day, not to be overlooked.