Those of you who know me are familiar with my somewhat “wonky” interest in government, its structure and operations, so when I came upon Jordan’s Parliament building, I had to go in. I was hoping to find out that they gave tours on certain days or something like that.

There were no regularly scheduled tours, and the guards are not accustomed to tourists dropping in, so I caused a small stir. I did not have the Arabic vocabulary to explain that once upon a time I had been an elected official in local government and that I was interested in other countries’ governments, and they didn’t have the English vocabulary to understand me try to explain myself.

But, they looked at my New York driver’s license, deemed me to be harmless, and handed me off to the security supervisor. He searched out someone who was able to speak more English, who turned out to be, appropriately, the Director of Communications.

The Chamber of Deputies, he said, meets twice a week on Sunday and Tuesday, at 2:30 p.m. Yes, I was welcome to attend. I agreed to check in with the security supervisor, who gave me his cell phone number, and off I went, planning to return on Sunday.

I have been to a lot of legislative body meetings in my lifetime, both county and state. These meetings are often like watching paint dry, but even so, I was interested in attending the Chamber of Deputies’ meeting, just to observe the proceedings and get a sense of how things work in Jordan. Things like this are one of the luxuries of traveling at my own pace.

On Sunday, I returned to the Parliament Building. No one was interested in looking at my identification – they all remembered me. I asked how to find the meeting chamber, and they sent me up to the third floor. There was no entry to the chamber, but a person in the hall sent me down the hall to the last office on the left.

This was the Minister of Commerce. He spoke English well and explained that today the Chamber of Deputies was holding a “confidence/no confidence” vote. The Prime Minister (since May, 2016,) Hani Al-Mulki and all of the Ministers might have to resign, depending on the vote.

Well, then. The “paint” might turn out to be a bright color.

The Minister’s assistant showed me to the visitors’ gallery (you can see it in the upper right corner of the photo above) as the meeting time approached. The center of the gallery was filled with television and radio journalists, cameras and cameramen, and microphones, all tuned to the floor of the Chamber.

I sat on one side from them, and watched as the Deputies started to appear. The scene would be familiar to anyone who has attended these kinds of meetings. Deputies came in, usually carrying some papers, which they placed on their desks. They greeted each other, and gathered in groups of twos or threes, no doubt discussing the vote to be held, pros and cons, and sharing legislative gossip. There were several female members, many more men, and the occasional red and white kuyeffeyyeh added to the color. 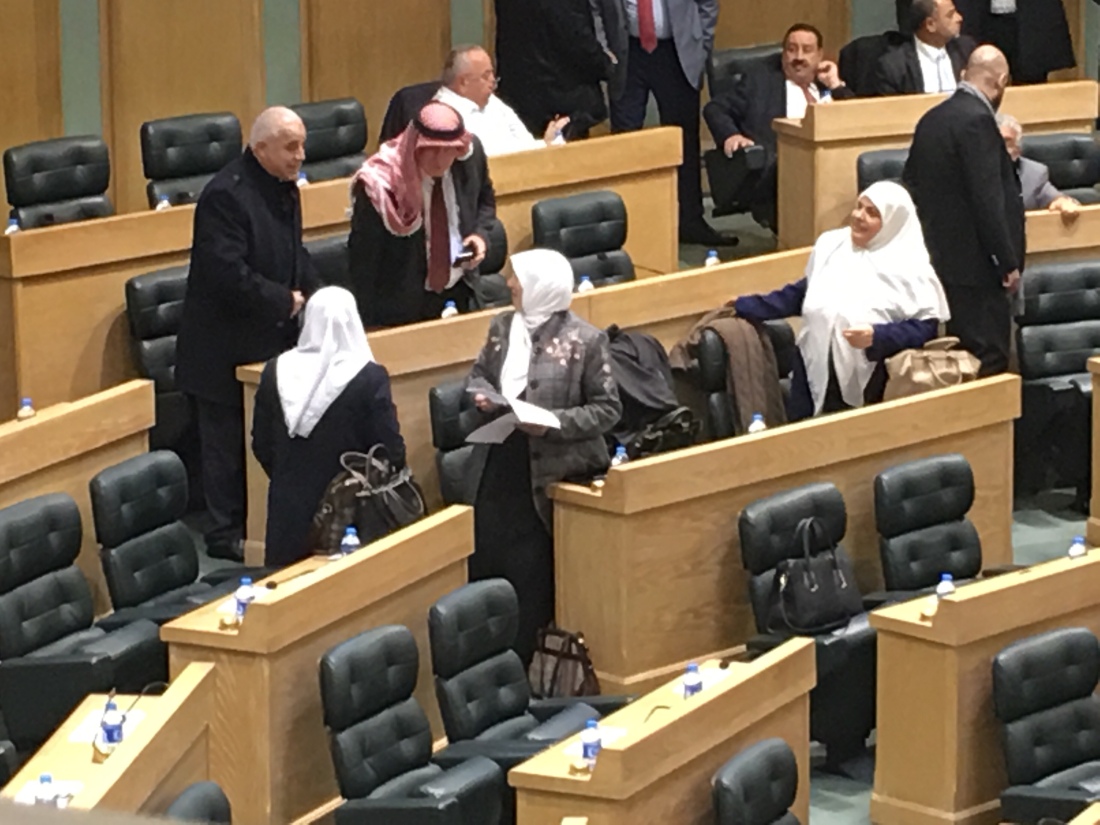 The spectators’ gallery filled up. There were quite a few interested observers. Some of them had uniform blazers, so I guessed they were government employees, but many others looked as if they were simply interested citizens.

The assistant could not (or would not) explain to me what had precipitated this vote, but I was pretty sure I knew. There had been some small demonstrations, and the manager of a local bookstore/coffee shop explained to me that all of his book prices had gone up because the government made him raise them. From his description, I surmised that it was some kind of sales tax or value-added tax, and this was a new thing in Jordan. And it was not just on books, but also on bread, and the flour, yeast, salt – everything that went in to the bread, too. Citizens were incensed.

In previous years, there had been serious and large demonstrations when subsidies were eliminated from food and again when removed from fuel. The cost of living went up significantly – even now, the annual average salary is about $5,000 in U.S. dollars.

The Prime Minister entered last and called the meeting to order. I could not understand the words, but the procedure was familiar: the motion was put on the floor, there were a few statements and a few questions, and the roll call vote began.

There was no hoopla at the end, and the Prime Minister didn’t signal anything unusual. I was able to locate a young couple who I noticed had been following the proceedings, and they confirmed (in English) that the vote meant that the current Prime Minister and Cabinet would continue: 96 for, 42 against, 9 abstentions, and 13 absent.

The meeting was adjourned. The Deputies, the Ministers, the spectators, the press – we all filed out. When we reached the parking lot, another familiar ritual was taking place – Deputies and Ministers in front of television cameras and microphones, making their statements and responding to questions.

The most significant thing about it, however, was that even though Jordan does not have a democracy in the same way as we do (it’s against the law to criticize the King, for instance,) during the whole process, from my first visit and through these interviews, it was clear that Jordan has a participatory government and citizens are respectful, but not fearful. The democratic process could be broader, but Jordanians are engaged, and their participation has meaning.