The first floor of the Museum opens onto the water situation in Jordan, which is serious. Jordanians are asked to use about 96 liters of water – per week. The “It’s Water Day!” Each Jordanian family has a uniformly-sized tank that is filled once a week. They are the white tanks that I see on house roofs when I look out from my terrace. The tanks are uniform in size. I don’t know how much they hold, 96 liters or more, but I have never run out of water during the week. If someone runs out, they can buy more water, but it costs more.

Part of the display is titled, “Pulling water from thin air,” which illustrates a system designed to extract water from dry desert air. A Jordanian scientist, Professor Omar Yaghi, invented a new material – Metal Organic Frameworks (MOFs) – that can harvest water from even the driest desert air. The display goes on to explain that “During the day, the device is closed and the sun’s heat forces the MOF particles to release water vapor, which condenses into water droplets, up to 3 liters per day.”

Obviously, that won’t support agriculture. A post-1994 agreement allows Jordan to take a specified amount of water from the Sea of Galilee. This provides relief for now, however, I have seen how irrigation has reduced the Jordan River to nearly nothing, and I don’t think this can be considered a long-term solution. According to information from Lonely Planet’s Jordan travel guide, Jordan has just 140 cubic meters of renewable water per person (compared to the U.K. at 1500 cubic meters per person or Israel’s 340,) and even that is expected to fall to 90 cubic meters by the year 2025. By some estimates, Jordan is due to run out of water within 20 years.

Mainstays of Jordan’s cuisine are grown at home, but also imported: mutton from Jordan, Romania, Georgia, and Australia, almonds from the USA, and rice from the USA and India. Jordan grows many of its own vegetables – beets, carrots, eggplants, cucumbers, cauliflower, and others (you can see them in the roadside stands) – and exports over 462,000 tons of tomatoes, followed by smaller amounts of bell peppers, lettuce, and peaches. Wheat and barley, major imports, come mainly from Russia and Romania. Lemons, chicken, olives, and fish, other important elements of Jordan’s diet are provided locally, sometimes very locally – Victoria has lemon and olive trees in her courtyard. She doesn’t have chickens, but I hear roosters crowing in the early morning, so someone does nearby.

Olive trees have been cultivated for over 7,000 years in Jordan. It was a multi-purpose mainstay of their civilization, providing food, but also oil for lamps and soap, and pith for making “jift,” a solid fuel used for heating and cooking.

Jordan actively promotes tolerance toward other cultures and religions. In the Museum, they support this with the multi-cultural references in Petra’s architecture. Decorations on “The Treasury,” the famous landmark of Petra, include an Egyptian god, Osiris, Nabataean graphics, and images of Greek and Roman gods. I have found that some residents have very strong feelings about Israelis, but for them, it’s about land rather than religion. There is still bitterness about the change in land occupation and boundaries since 1946.

There are now 9.9 million people in Jordan. The majority are Palestinian and some are Iraqi. Jordanians, Iraqis, and Palestinians are about 98% Arab and 92% Muslim. About 6% of the 9.9 million are Christian, and 2% are “other.” Palestininan refugees swelled Amman, straining its housing and transportation resources, but are comparable in wealth and education, and becoming part of Jordan. The war in Syria is not mentioned in the display, but is a fact nonetheless. There are roughly 120,000 Syrian refugees – another large city by Jordanian standards. They are impoverished, homeless, have little hope of repatriation, and they do strain Jordan’s resources.

Many Arab people in Jordan will tell you that for centuries, there was only the land where Arab tribes and families lived, not the separate countries of Jordan, Iraq, Syria, Lebanon, Saudi Arabia, and others. These tribes and families still make up the fabric of Arab culture. They do not think of the Palestinians as a separate nationality – their status as citizens or non-citizens is based on bureaucratic boundaries imposed by Europeans.

The role of women in Jordan is changing dramatically. In 1980, women had a life expectancy of 66, zero representation in the Parliament, and a literacy rate of 55%. In 2017, these numbers had changed to a life expectancy of 75, 30 seats in Parliament, and a literacy rate of 93%. University enrollment is roughly equal between genders.

On the first floor are two displays of archeological significance, and they are set off in their own respective rooms: a section of the Dead Sea Scrolls and early human images.

There are two human statues. The first is two-headed, which is something of a mystery, and unfortunately not much is known about it. It is one of the oldest human statues, and was found, along with the other displayed statue, among 32 plaster statues in Amman in the 1980s. It’s meaning is lost, but the people who made it were living in an established and thriving village. The estimated date for both statues is 7500 B.C., making them almost 10,000 years old. 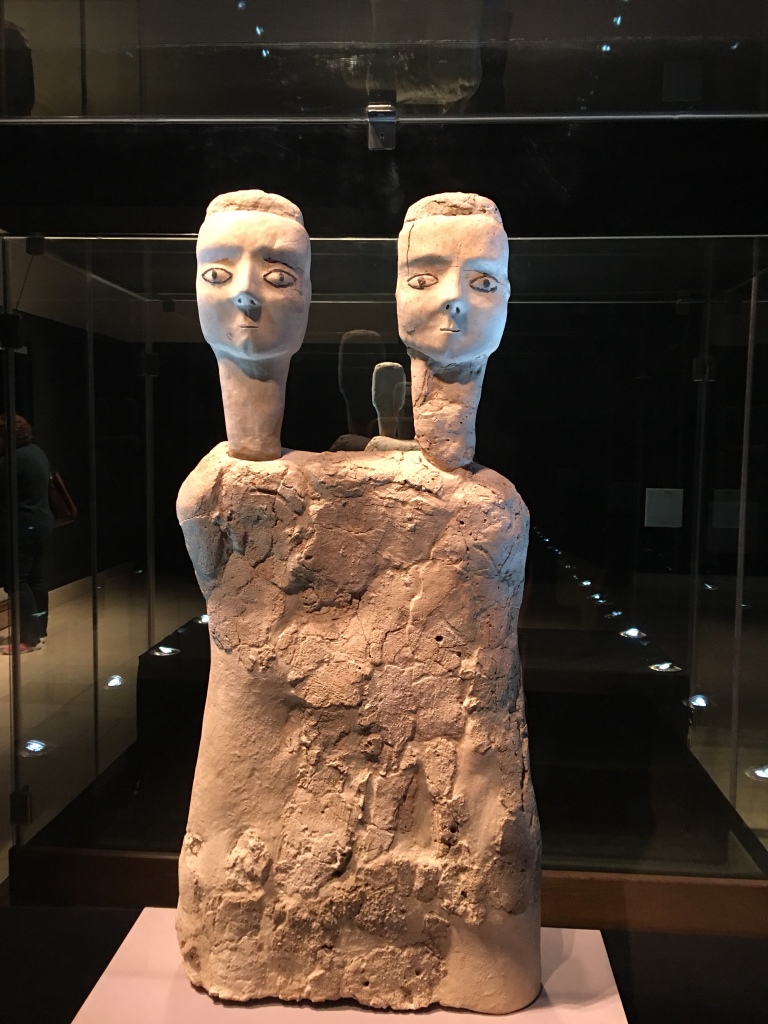 The other room displays the “Copper Scroll” from the collection of Dead Sea Scrolls, whose religious and historical significance stems from the fact that they are the only known surviving copies of Biblical documents made before 100 A.D. The scrolls consist of about one thousand documents, including texts from the Old Testament. Except for this one. The Copper Scroll is not Biblical at all, it is only about treasure! Scholars debate whether it refers to legend or not, and no one has found anything significant.

The upstairs was devoted to “1,001 Inventions,” and illustrates the contributions that Arab intellectuals and patrons have made. Anyone who remembers their world history class will remember that during the Dark Ages, the Arabs preserved much of the world’s knowledge and made significant advances of their own, especially in astronomy and mathematics.

Fez, Morocco, was the site of a university and mosque, built in 859AD by a rich woman named Fatima al-Fihri. It is one of the oldest universities in the world. Four caliphs of Baghdad built a famous academy where those who wrote or translated scholarly books were rewarded. In 12th century Toledo, Spain, scientific knowledge spread as European intellectuals gained access to the books there. Even now, a building dating from that time is now a modern translation center. 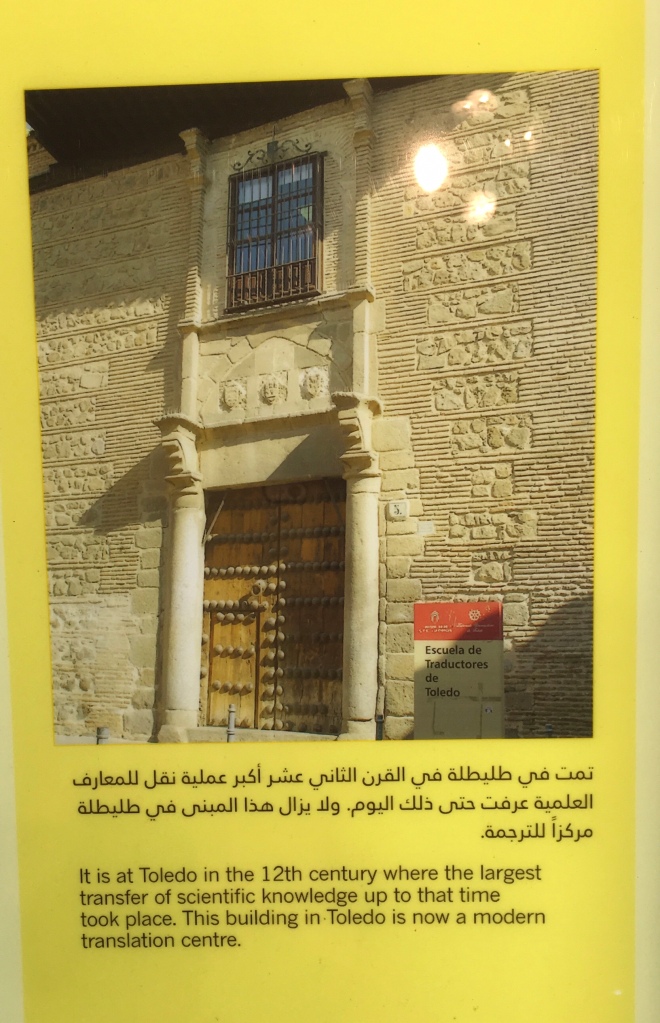 The exhibit presents a detailed history of the Arab contributions to algebra and geometry. Geometry became particularly important in developing what are now traditional designs for mosques, both architecturally and aesthetically for decoration because religious human images are forbidden, unlike Christian images of Jesus, Mary, and others.

The exhibits as a whole try to educate visitors about Jordan, and, for Jordanian schoolchildren (who make regular visits,) to impart pride in the Arab heritage. In a country where the average annual income is the equivalent of $6,000 USD and unemployment is high, instilling pride and a sense of unity is important in order to keep young people from looking for opportunities elsewhere. Many do – family and friends are very important to Arab culture so it’s hard to leave, but also hard to resist the much higher salaries available in western countries.

Jordan, under King Abdullah II, has tried to accept some of the changes in the Middle East boundaries, to find a place of balance, maintain an environment of tolerance, and work toward stability in the region. The Jordan Museum supports that mission.