Petra, as I noted in Day 1, really deserves two days, especially if you are any kind of a history buff. The several ancient layers of ruins – Nabataean, Roman, and Byzantine – and the unique geography of the site have earned Petra the recognition of UNESCO as a World Heritage Site.

Christiana and I had covered the majority of the main site on our first day. (One of the ways we were compatible travelers was our slow, but sure, endurance.) So on our second day, our goal was to head straight for the beginning of the path up to “The Monastery,” a large feature similar to The Treasury. The path is long, uphill, and someone counted 800 stair steps along the way.

We had declined rides of any sort on our first day, but on this second day, both of us had sore feet and other assorted muscle aches left over from the previous day. Camels, horses, and horse carriages are unable to climb the path to the Monastery. Donkeys were the animal of choice and we chose.

The Bedouin, PETA notwithstanding, appear to take good care of their animals. They own them and the animals provide a good share of their cash flow, so Bedouins have incentive to care for them. I never saw an animal that appeared underfed, beaten, or neglected, feet being the usual giveaway for neglect. I didn’t inspect all animals, of course, but that’s what I saw.

The animals used for tourist riders have saddles on, probably to protect the animal as much as the tourist. I have a little experience as a rider, and a positive impression of the sure-footedness and intelligence of donkeys. After two or three trips a day for a few years, these donkeys were still living. They knew the way and how to get it done. This was important, because the drop-offs were steep and there were no railings or anything else between a rider and the ravine. Christiana didn’t ride and didn’t trust donkeys. She had a simple desire to not walk to the Monastery.

Our guide, the owner of these donkeys, was a healthy young man (except for his smoking) who started out on a donkey of his own, but soon gave it up to assist Christiana. We had to pause a few times to let him catch his breath, since he was alternately running to keep up with the donkey, and helping Christiana. The donkeys went charging up the steps because that’s how they could get to the top of each series. Christiana was having some difficulty with the heights and the awkwardness of managing the steps on the back of a donkey, and awkward it is. I believed that the donkey wanted to keep on living as much as I did, hung onto the saddle horn, and didn’t look down.

Even so, riding a donkey is hard work, and both of us were tired and sore in new places when we arrived at the end of the steps.

Along the path, along all of the paths we took, Bedouins had souvenirs, snacks, clothing, and jewelry stands. I am convinced that there are Bedouin who do not come down to the village for weeks at a time. The only Bedouin women I saw were at these kinds of souvenir stands. Giving rides, being guides, and most of the stands seemed to be the business of the men.

Several such stands were clustered at the donkey-drop-off point. Christiana and I took the opportunity to look and rest for a while. It was about noon, so we had time. I bought another scarf, which the salesperson insisted on wrapping around my head in the Bedouin manner. It was interesting, it did keep my hair out of my face, and the style would have let me cover my face in case of a sand storm, but I didn’t (and don’t) think it was very flattering to a non-Bedouin. From here, it was still a distance to the Monastery, but it was comparatively level, only a few stairs, and we made it in about twenty minutes.

The Monastery is impressive, and worth the trip, but there is much more to see up there. I say, “up there” because by this time we were at the top of the hills that surround the main archeological site. Naturally, there was a snack stand, and Christiana and I snacked, looked at the Monastery, and watched others arrive from the trail. Some of them were people we had passed while riding on the donkeys.

Having made it this far, we decided to explore the area, lured by the promise of views. We followed the trails and signs, and we found Bedouin camps and spectacular views of the valley beyond the hills.

Finally, we had to start down. Our path led past some “backstage” scenery. 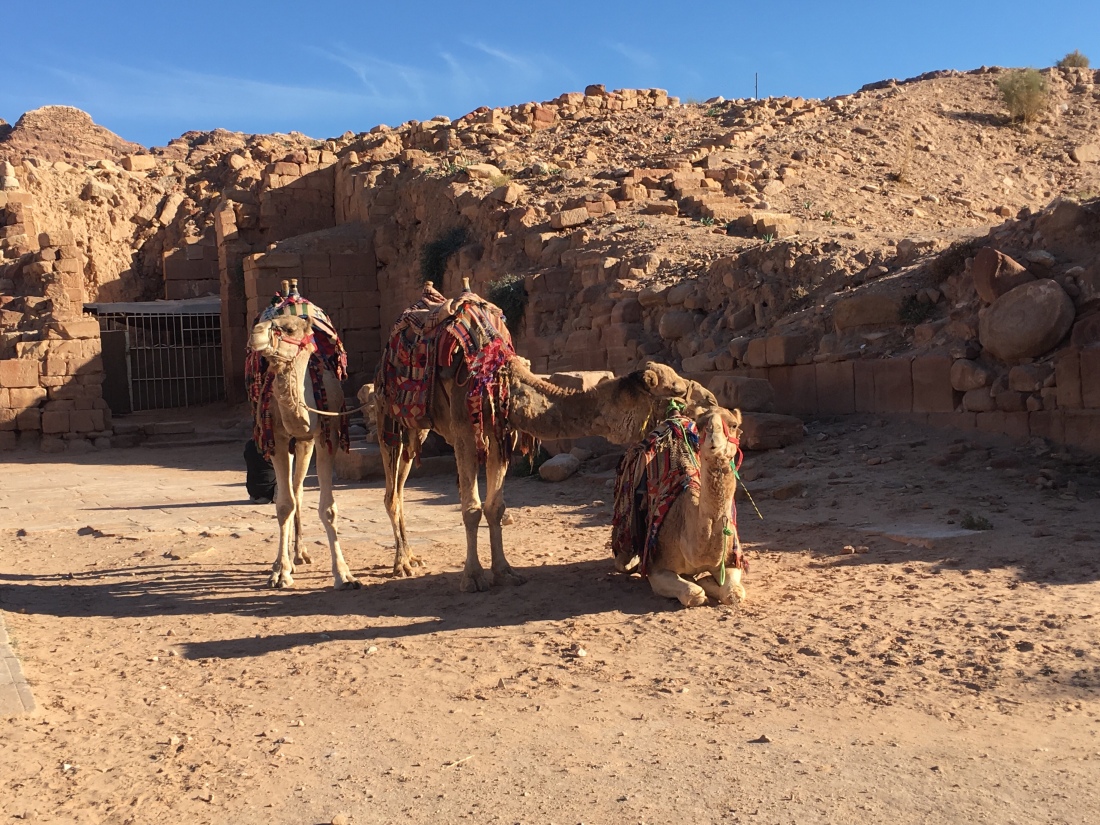