Victoria, the person whose house I am staying in, works for the United Nations in Amman. She is currently on a mission in Africa, which began in January. I am house-sitting and cat-sitting since then, until the end of this month.

In the run-up to my arrival in Amman, Victoria shared with her co-workers that I was coming to house-sit, etc. It turned out that one of her co-workers, Ilse, was anticipating a visit from her mother in January. Her mother was coming from South Africa, and she felt badly because she wasn’t going to be able to take more than a couple of days off to do things with her. Victoria said, well, gee, why don’t I give you Suzanne’s phone number, maybe they can sightsee together? So she did.

Fortunately, Victoria told me this, so I was prepared when I received a phone call from Hugo, Ilse’s husband, about having lunch together, with Ilse and Christiana, Ilse’s mother. Hugo and Ilse’s 2 year old son, Lucien, would be there, also. We made arrangements to meet at Sufra Restaurant.

It turned out that Christiana is an elected official in a province in the Union of South Africa, and we hit it off because no one who hasn’t been an elected official really understands, and here we were. From our respective sides of the Atlantic, we understood the challenges and weirdnesses of political life in a way that others just don’t. (Sorry, but you don’t.)

Hugo made the arrangements over the phone at the restaurant, we took a photo to commemorate the meeting at Sufra, and the following Monday, January 15th, we were on the 6:30 a.m. JETT bus for the four hour trip to Petra. We would stay there the first night, and if we wanted, the next day we would head for Wadi Rum.

There is a lot to see at Petra. Anyone who has seen “Indiana Jones and the Temple of Doom” has seen “The Treasury,” one of the best known features of Petra. But to understand why all the fuss about Petra, it’s good to know a little history.

When Petra was settled and developed by the Nabataeans is unknown, but by the 1st century BC, Petra was a prosperous capital of the Nabataeans’ empire. It became rich by trading frankincense, myrrh, and spices. The Nabataeans developed a system of channels to move water throughout their capital that can be seen along the walls of the Siq. Later, Petra was annexed to the Roman Empire and continued to prosper until a large earthquake destroyed most of the city in 363 AD. The earthquake damage, combined with a shift in trading routes, combined to degrade Petra’s prosperity. The city was slowly abandoned and by the mid-7th century, it was deserted and forgotten except by the local Bedouin.

Petra was re-discovered by the outside world in 1812 through the efforts of a Swiss explorer named Johannes Burckhardt. Burckhardt dressed as an Arab and spoke fluent Arabic, and persuaded his Bedouin guides to take him to the lost city. According to our guide, he accounted for his Caucasian appearance by claiming to be a Circassian Muslim, a group that originated around the Caspian Sea. From that time, Petra became more and more famous as a fascinating ancient city.

The entrance to Petra is right off one of the village streets, and right next to our hotel, but there is a healthy walk from the entrance gate to the Siq, the entrance gate formed by nature. Along the road there are hints of what is to come – incomplete rooms and carvings in the rock. There are also the first of many offers to ride the horses, donkeys, or carriages driven by the Bedouin.

When you know you are really entering Petra is when you reach the place where the road disappears into a very narrow, very tall canyon called “The Siq.” It is wide enough to accommodate a buggy all the way through, but there are places where those on foot had better move.

The Siq is not without features of its own. The rock walls are formed in layers, some golden or pale colors, and some that are the rose color for which Petra has been called “The Rose City.” Along the Siq walls, there are channels that were used to move water to the village. The name “Nabataeans” means “people of the water,” and they were well known for their engineering skill, visible throughout the Petra site. The passage was so much considered the entrance, that the walls have bas-relief carvings in some places. My favorite was the camel caravan, although sadly the camels’ legs have worn away. It’s hard to see in the photo, but there were three camels in the line, with one person: 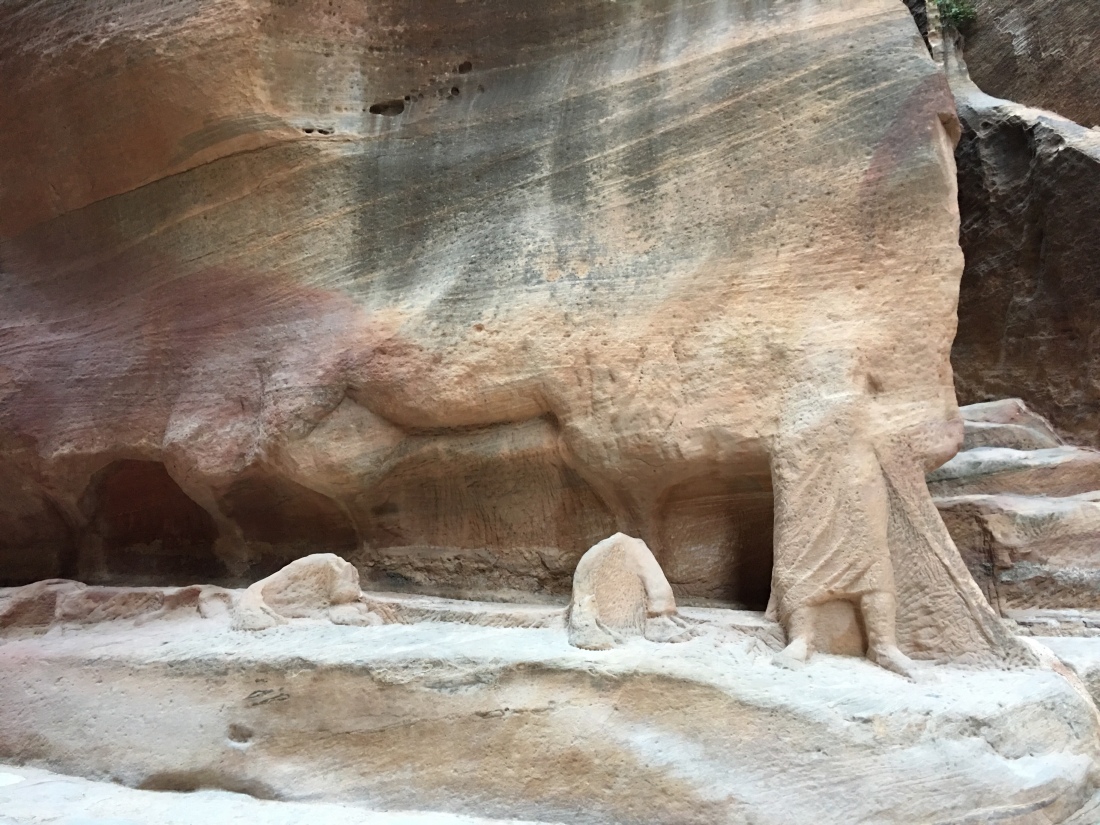 The Siq is longer than you think, but eventually, you come to the Treasury. It was the tomb of a rich member of the Nabatean community that created Petra, and is a major attraction at Petra.

It is also something of a zoo, being a congregating place for camel rides, carriage rides, guides if you don’t have one already, a booth for the tourist police, and the site of a couple of large shops selling very (really, very) over-priced drinks, snacks, and souvenirs. I did not photograph those.

The Treasury is not open. The way in is blocked by a huge, dry moat that looks as if it is in the throes of excavation. The information signs were in Arabic except for the “No Entry” signs, so I don’t know when, or if, it will be open. It was named The Treasury because it was the tomb of a very rich family, and it was believed to hold treasure. The exterior has been damaged by treasure hunters trying to gain entry, even shooting at the carvings of urns on the front to see if they held anything worth scaling the front for.

The most impressive thing about this and all of the Petra tombs and monuments is that they are carved out of solid rock, including the finial at the top. (Apparently, this fact was not known to treasure hunters.) The sheer physical effort and design skill is amazing, and – there are no “do-overs” when carving solid rock. You can’t put it back. The designs indicate some Greek or Roman influence.

There is much more to Petra than the Treasury. A passage to the right leads to further areas to explore. Much has been excavated, but much more remains to be excavated. Human settlements indicate the area has been inhabited for over 10,000 years, even though the city itself was deserted mid-7th century. Much has been filled in by sediment from the periodic flash floods that happen, so as we walked around, there were doorways that were only half visible, filled with the sandy soil.

As we emerged from the passage, spread in front of us was a large open area. On one side were rows of rose-colored doorways with carved lintels, some completely visible, but some partly buried. On the other side was a long row of souvenir shops. And cruising the path were numbers of horses, donkeys, camels, and the occasional carriage. It was morning, so the rides were being offered mainly on the entrance side of the area.

The Bedouin are a fixture at Petra. In the time that Petra was abandoned and unknown, the Bedouin took up residence, pitching tents in the open areas, and using the carved out tombs for storage. When the government of Jordan decided to develop Petra as a tourist area, they built a modern complex of apartments nearby and moved the Bedouin into it. Fat chance. The apartments are used by some, but I noticed that many Bedouin still live in Petra, although they keep residential tents off of the main tourist pathways. The beds and cookstoves give the game away. The rides and the souvenirs are Bedouin enterprises and they are a family affair, with children helping out.

The Romans left their mark on Petra during their occupation, evidenced by the arena imposed on an area of unoccupied tombs, the roadways, and temple ruins. 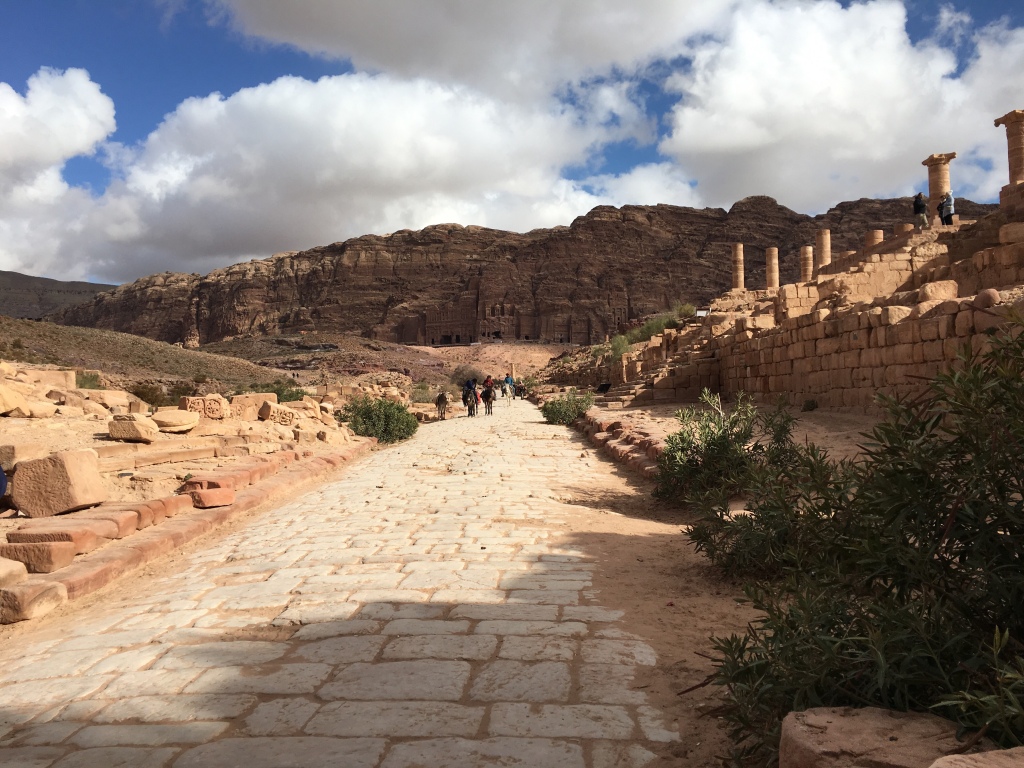 Followed by the Byzantine influence. We explored the ruins of the church, where some impressive mosaic floors are preserved.

Petra really deserves two days. On the second day, we walked through the Siq and past the Treasury, past the Roman ruins and Byzantine church excavation, to the place where we had stopped the afternoon before.

Christiana and I were compatible travelers – pack lightly, be prepared, listen to the news, talk politics, and relate about the foibles of public life. Walk. Leave no stone unturned, or at least, not very many. We climbed up the steps carved into the valley side and found a cave that had been carved into the upper levels.

This looks like it is on the “main floor,” but it is actually about a hundred feet up in the air. Notice that a giant pillar base provides display space. It is the home, I assume by the beds in the corner of the cave, of the Bedouin man who was resting on a couch placed at the edge of the plateau. The view was spectacular, the air clear and fresh, and it was here that he conducted business. Christiana noticed the mirror that was there in case you want to see the scarf on. I ended up buying post cards here, just because.

There were places further out. The Monastery was, after the Treasury, the next biggest landmark attraction. There are famously 800 stair steps to climb to get to the Monastery, and we opted to ride donkeys for the climb.

One thought on “Petra”