Beit Sitti is a restaurant on Jabal Weibdeh. “Jabal” means “hill,” and Amman is built on a cluster of hills, sort of like Seattle or San Francisco. The hills here are smaller but sharper, “pointier,” if you will, and the Beit Sitti is located across the small valley between Jabal Weibdeh and Jabal Amman, where I am staying. If it was not for an apartment building, I would be able to look right at their front door. It’s less than a half mile away, but a strenuous walk downhill and uphill along mostly narrow, winding streets.

Above the restaurant – because everything in Amman is built on a slope – is a terrace, and steps lead from the terrace into the 1920s style house situated above. It is a beautiful old house, and it is where the cooking classes are conducted. The young woman who owns and manages the cooking school, owns the old house, which was left to her by her grandmother. “Sitti” means grandmother in Arabic, “Beit” means house. The “i” on the end of Sitti is a suffix added to indicate possession, so the name means “My Grandmother’s House.” (I know, I could have just said that, but I wanted to explain that so you know that I’ve been paying attention in my Arabic classes.)

The school chooses the dishes that comprise the meal that the class will cook. The class consisted of fourteen people. Most of us were Americans, but there were two Danes, boyfriend and girlfriend. They didn’t speak much English and were reserved, and I didn’t learn much about them. There was another young couple who were visiting Amman from the West Bank, where they were working as social workers for the refugees there. They were joined by his parents who came to Jordan to visit, but were not allowed into the West Bank. There was also a young woman who had been working in the U.S. embassy in Jordan. She was enjoying a few days of vacation before returning to the U.S. There was me, and there was another group of six that rounded out the class. They came as a group and hence kept to themselves, but I know that they were vegetarian because we made two batches of our main dish so that one would be meatless.

I HAVE PUT PHOTOS FURTHER DOWN THE PAGE!

Maaloubeh, a casserole type of dish with chicken, eggplant, cauliflower, onion, rice & turmeric. It is baked right-side up in a pan, and then turned upside-down onto a serving plate when done, looking very much like a cake made of rice, with decorations of chicken & vegetables.

Moutabbal Shmander, a soft dip made with mashed beetroot, tahini, yoghurt, eaten by dipping bread into it.

Moutabbal, made with roasted eggplant & tahini, reminiscent of babaganoush, and also eaten with bread.

Dessert was “Basbousa,” made with yoghurt, coconut, semolina, & vanilla

All served with homemade lemonade and tea. It was great!

One of the things I noticed, looking through their cookbook and the cookbooks here in Victoria’s house, is that Middle Eastern cooking – Jordanian, Palestinian, Lebanese, and Egyptian – is Mediterranean cooking, meaning it’s basically healthy. Fish is popular, as is lamb, chicken, and beef. Muslims do not eat pork, which is specifically forbidden by the Quran.

Food is deemed to be “halal,” i.e. permitted food, or “haram,” i.e. forbidden. We didn’t discuss this at the cooking lesson, but the questions about this seem to come up when discussing Middle Eastern food. There are subcategories or nuanced classifications that are the subject of scholarly debate. Pork is the best example of “haram” food. Other foods that are “not in a state of purity” are also haram and may not be consumed. The criteria for being halal or haram include the source, the cause of the animal’s death, and how it was processed. And, just FYI, “halal” and “Kosher” are separate, different concepts.

The cooking lesson was a great introduction to the Jordanian culture, and I recommend the idea of learning about the food to anyone who travels to a different culture. Like the language, it speaks volumes about the values and thinking patterns of the culture. One of the things about Jordan, however, is that ever since 1948, it has welcomed refugees from Lebanon, Palestine, Iraq, and Syria, and it’s cuisine reflects the additions and variations of foods across the region. 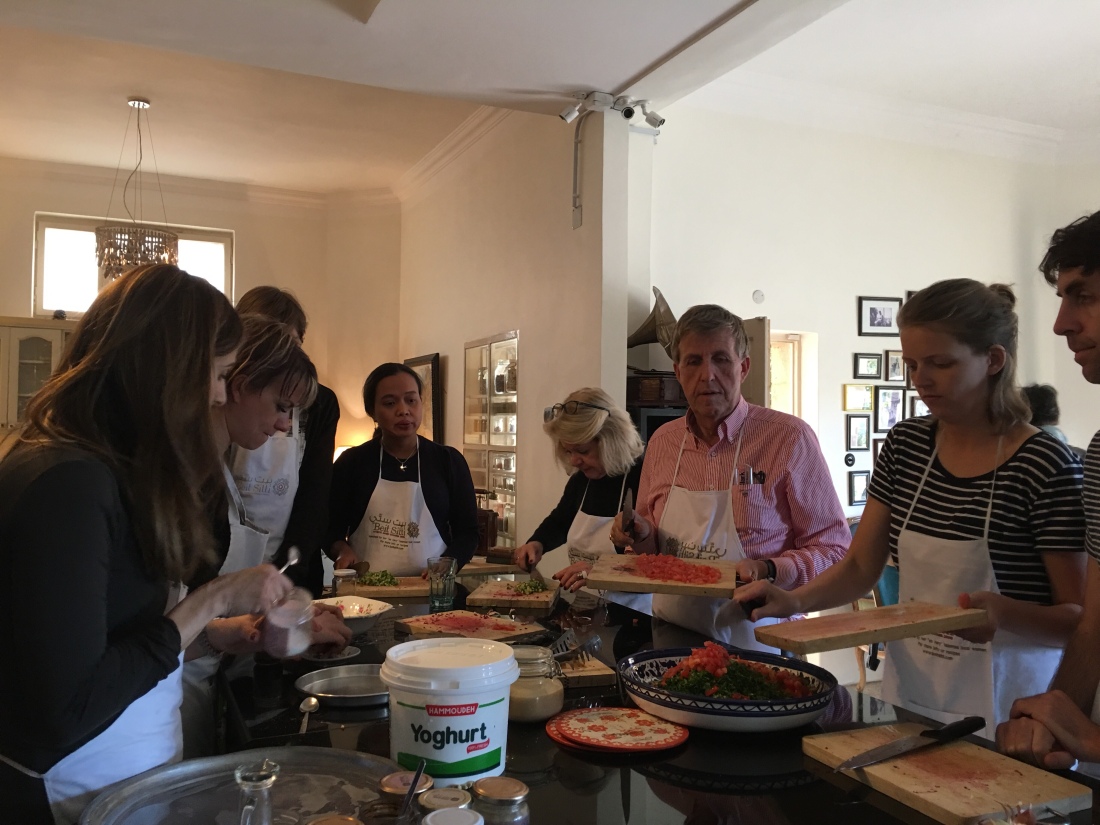 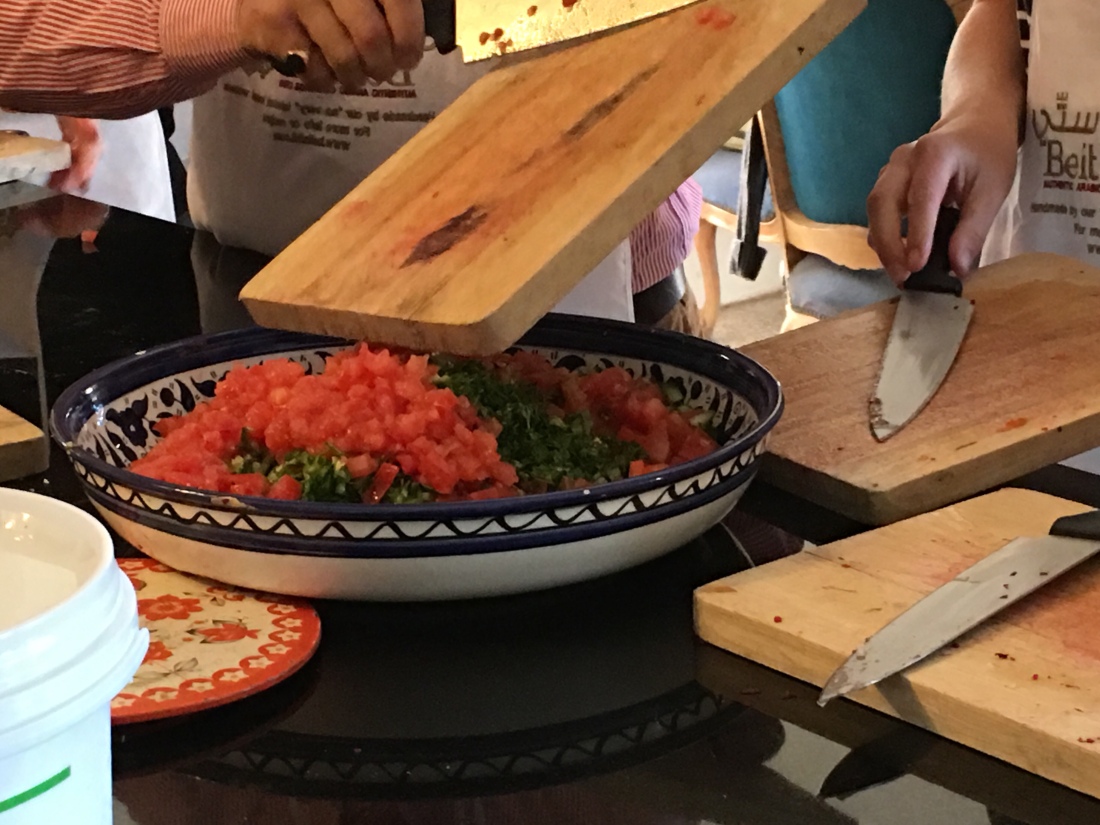 Making homemade pita bread, smaller, as you would for guests: 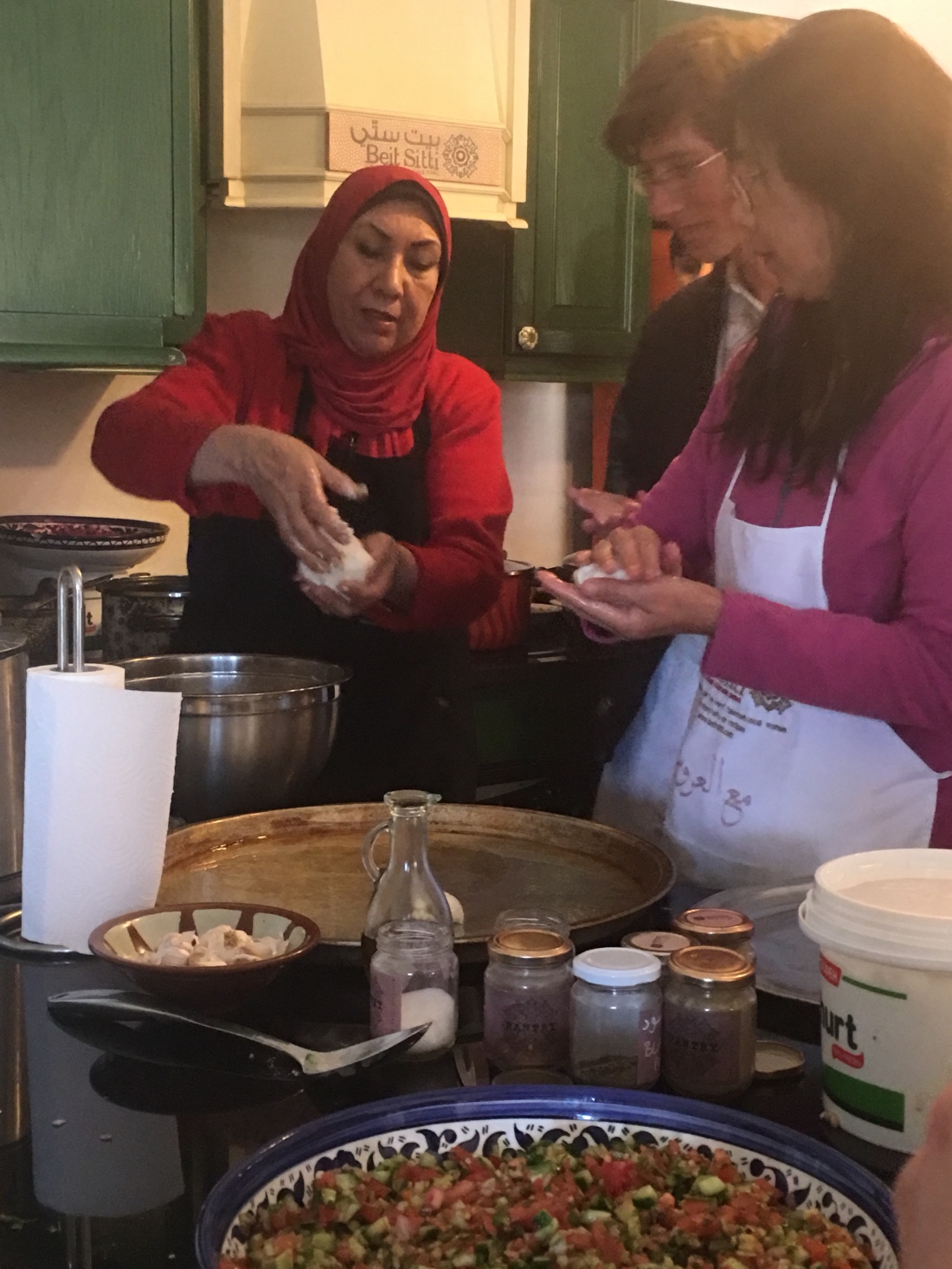 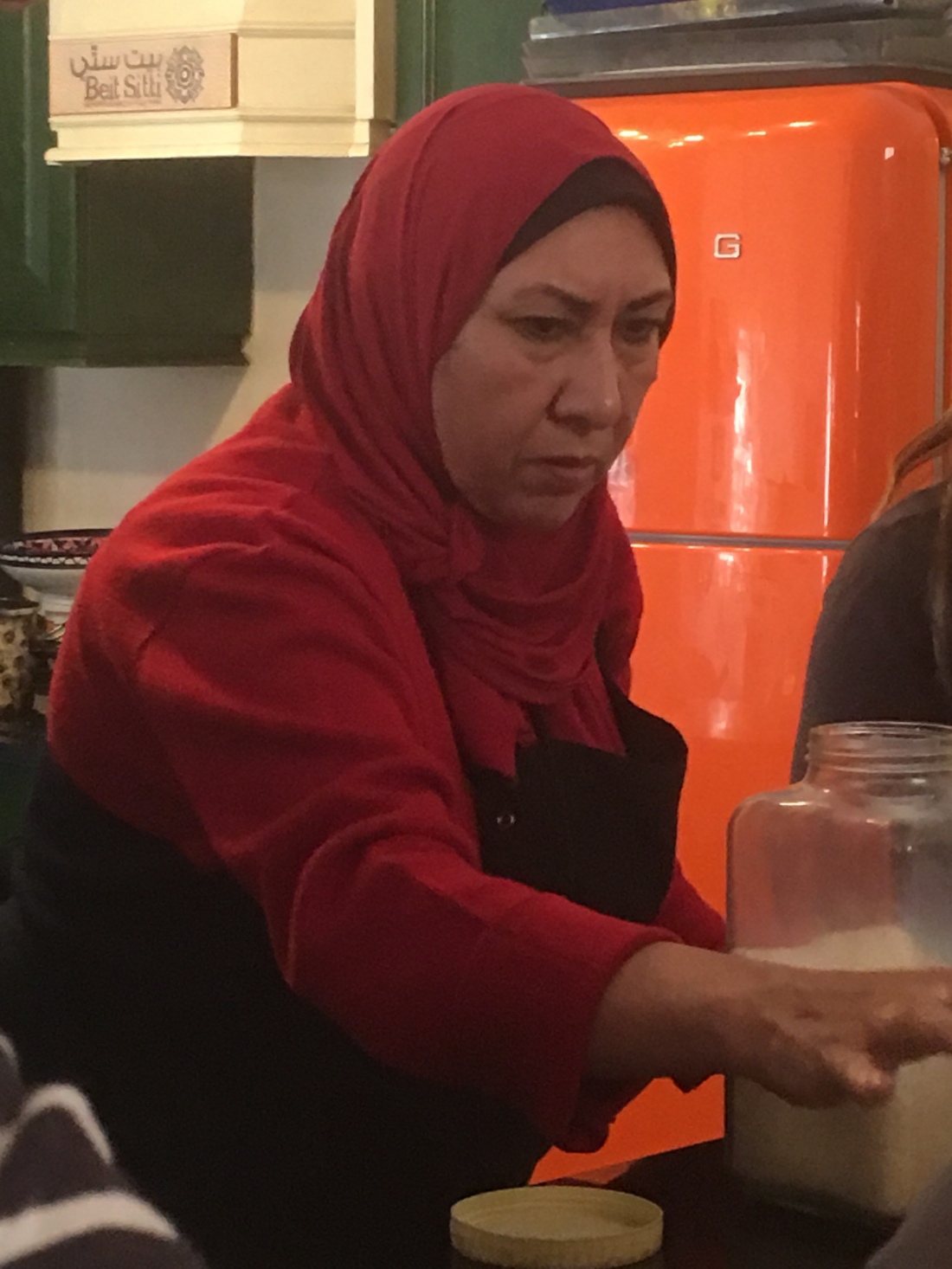 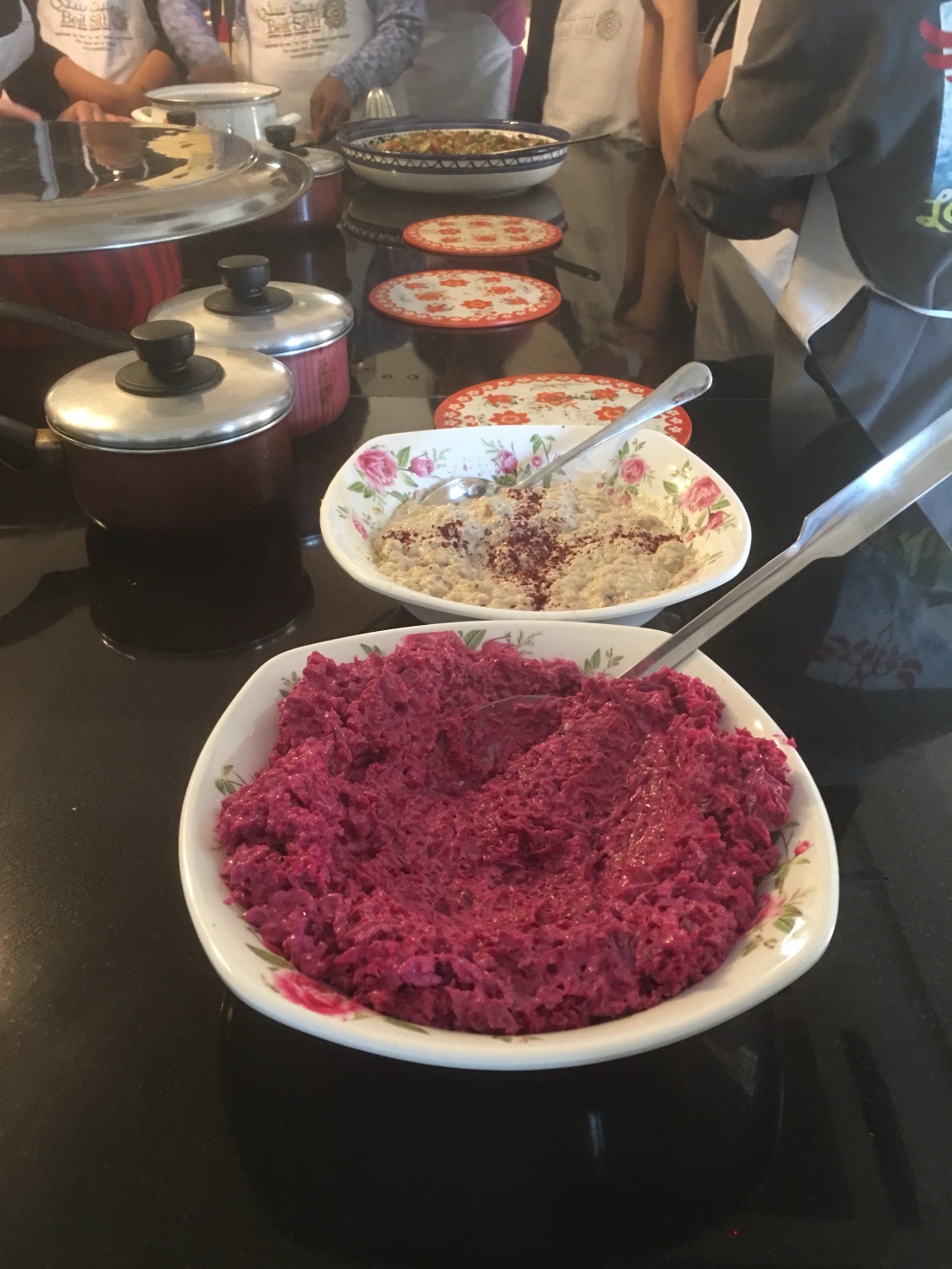 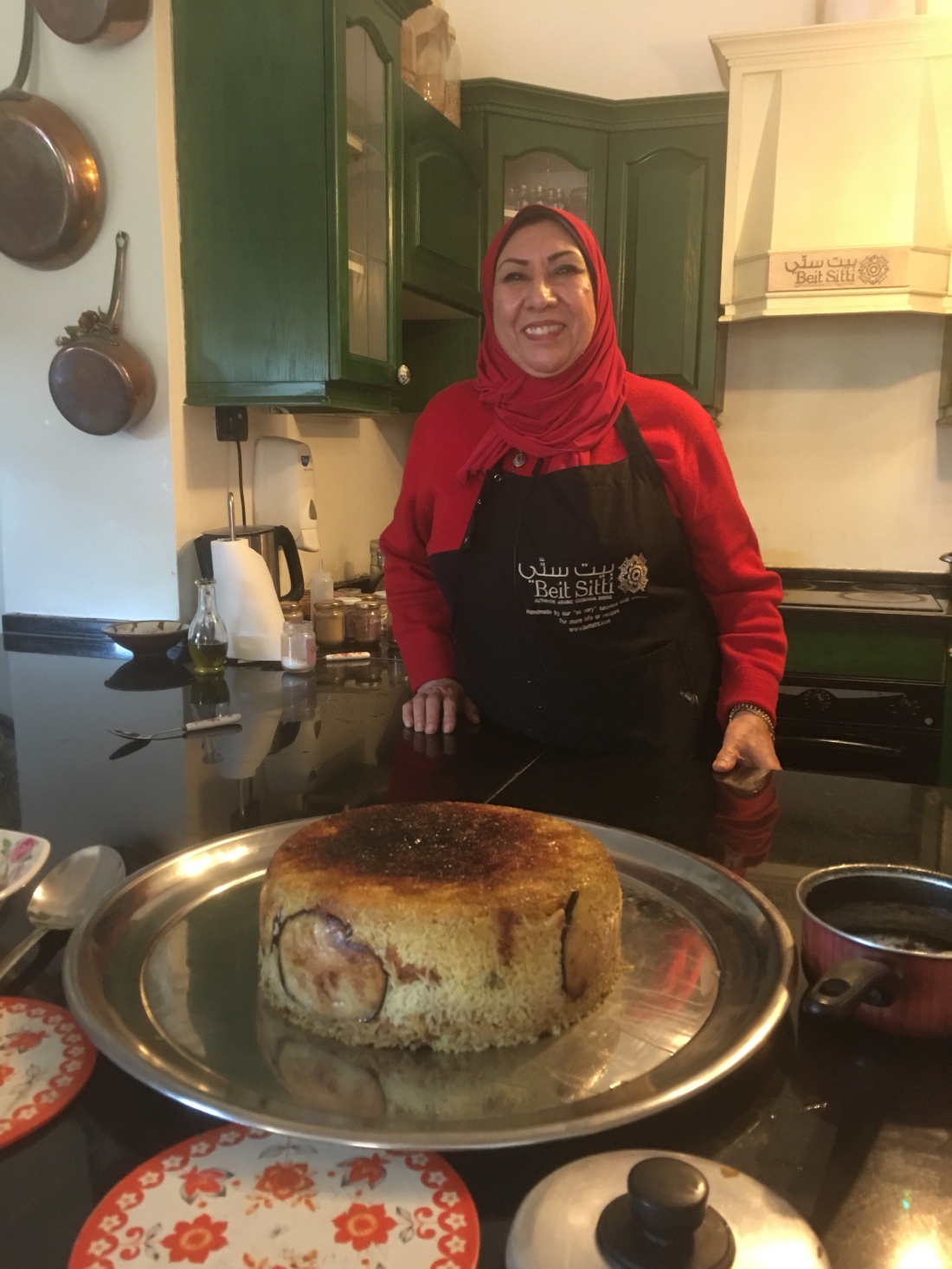 TA-DA! Lunch is served. I thought the Maaloubeh (rice dish) would slice like a cake, but even though the presentation is great, it crumbles as soon as you start to serve it. Notice the cute little pita breads, and the Moutabbals, beetroot and eggplant. I don’t have a picture of the dessert…probably was too busy eating it, because it was really good! 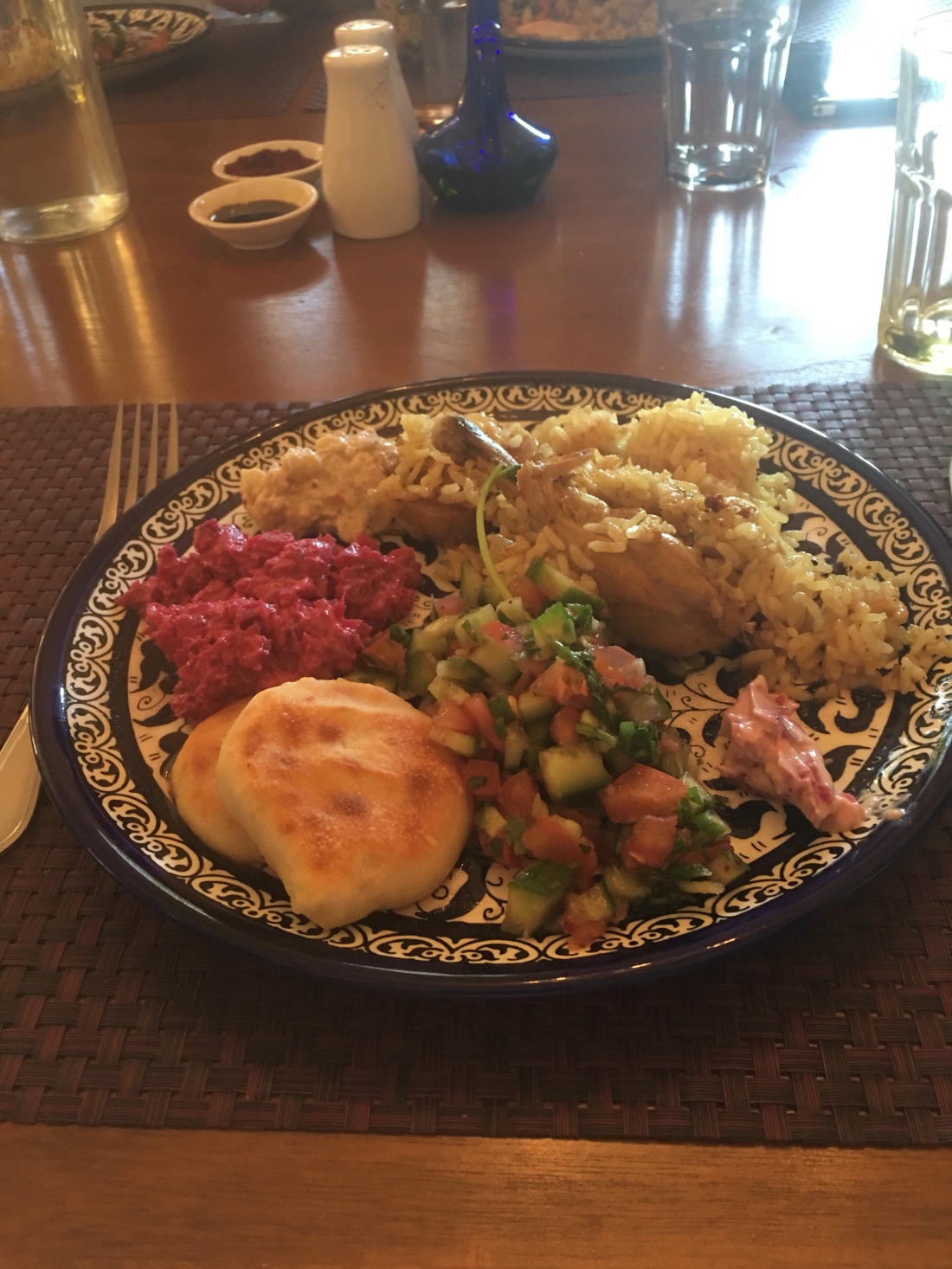