St. Martin’s Church is not what Canterbury is most famous for, however. That is the Canterbury Cathedral.

When Augustine became the first Archbishop of England, he established his seat, or “cathedra” (Greek for “seat,”) in Canterbury, and the church where he was based became a cathedral. He founded the monastery in Canterbury that became St. Augustine’s Abbey, and the Canterbury Cathedral, which is a working, living church, and the seat of the Archbishop since the time of St. Augustine. 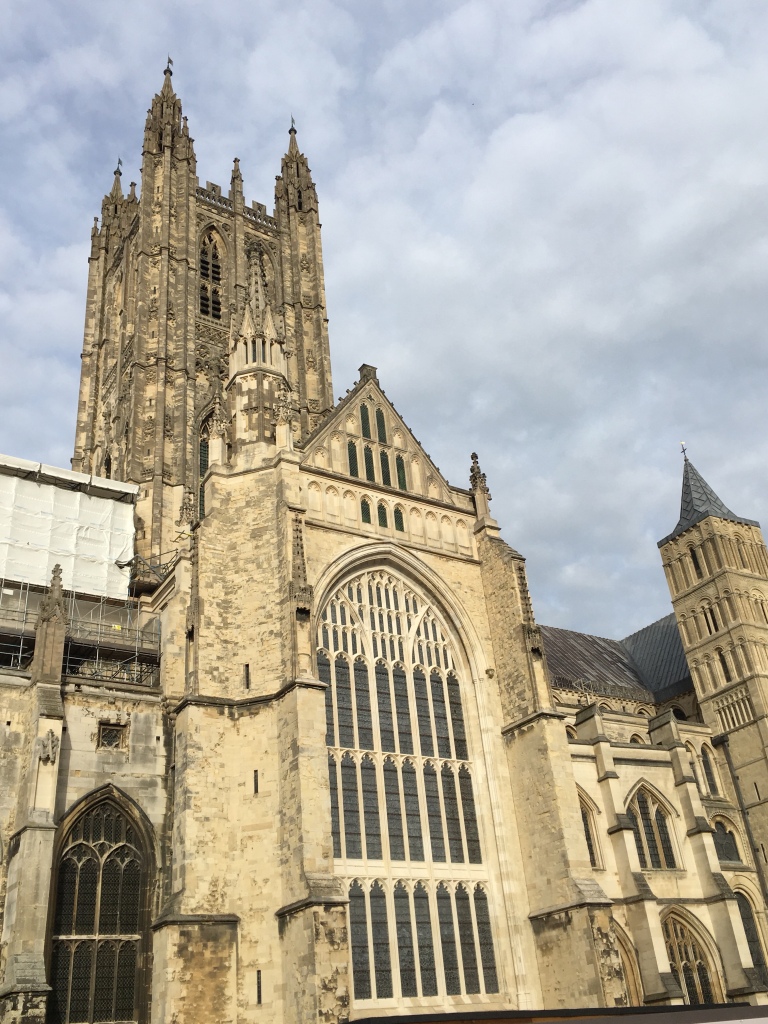 The Canterbury Cathedral was built while St. Augustine was still the Archbishop of Canterbury in the 6th century. The monks who came with St. Augustine and others from Canterbury, formed a community around the cathedral, managing the building. It was in the 10th century that the community was formalized into a Benedictine monastery, St. Augustine’s Abbey. The ruins of the Abbey still exist near the Cathedral. A very good display has been provided there, showing the history of the Abbey, and a new virtual reality capability has been installed to give a life-like demonstration of what life was like at the Abbey. The Abbey was dissolved by King Henry VIII in 1540 as part of the division between the Church of England and the Catholic Church.

The original cathedral was built of wood, and expanded by succeeding archbishops, including a crypt beneath the nave. The crypt, built in the Romanesque style, was extensively rebuilt and expanded by these Saxons before a fire destroyed the main level. Some of the 6th century cathedral still exists underneath the nave, built on top of a Roman road, which provided a foundation. The cathedral was rebuilt, 1070 – 1077 A.D., by the Norman Archbishop Lanfranc, over the original crypt, now known as the Western Crypt. This Norman “edition” of the cathedral was destroyed by fire in 1172, except for a staircase and an area known as “The Martyrdom.”

The Martyrdom marks the place where St. Thomas a Becket was murdered by four knights seeking favor with King Henry II, although the full story leaves the impression that the knights were mistaken about the nature of the King’s desire to be rid of “this meddlesome priest.” Miracles at Becket’s tomb in the Cathedral were soon reported, so the 1172 fire provided an excuse for making the cathedral a fitting shrine for the martyr. The cathedral was rebuilt in the Gothic style, with soaring ceilings.

Becket’s shrine in Trinity Chapel was finished in 1220, and for 300 years, it was the most popular pilgrimage in England and Europe — it was the destination of Geoffrey Chaucer’s pilgrims in The Canterbury Tales. The spot where Becket’s shrine stood is marked by a candle and a pinkish stone set into the floor. The stone bears the marks of thousands of pilgrims who knelt there, and the steps leading to the former Trinity Chapel are worn into waves by the pilgrims’ knees and feet. When King Henry VIII dissolved the monasteries, he also sent men to pillage Becket’s tomb. They scattered the bones of the saint and carted away 26 wagon loads of gifts left by pilgrims to honor Becket.

The “Quire” and the Nave are separated by the altar and a screen that separated the area where worshipers congregated and the area where the priests celebrated communion and the monks, who formed the choir, sat. When I stepped behind the screen and up the few steps to the Quire area, the view took my breath away. The pillars and ceiling of the nave are impressive, but the arches formed in the quire are truly amazing, and the lighting added to the effect.

The Cathedral has had modern additions, too, mainly memorials to groups or individuals. There is a monument, in fact, a “trail” dedicated to the American soldiers and sailors who helped fight WWII. During the WWII bombing raids on England, there were Canterbury citizens who spent nights literally on the Cathedral roof to prevent fire from damaging the building. There were some stunning stained glass windows added in the 20th century.

For all of its history, there is only one king who is buried here with his queen. The “Black Prince,” son of Edward III and father of Richard II, is buried here. His tomb is marked by the black effigy and royal coat of arms. And several of the Archbishops are buried here. There is no talking in the Crypts, and no photography is allowed.

I was the only one in the tour that afternoon, and we had a great time. The normal tour was 45 minutes, and we spent two hours. She was very knowledgeable and she was pleased to have someone who knew something about English history. I have added a few photographs below: 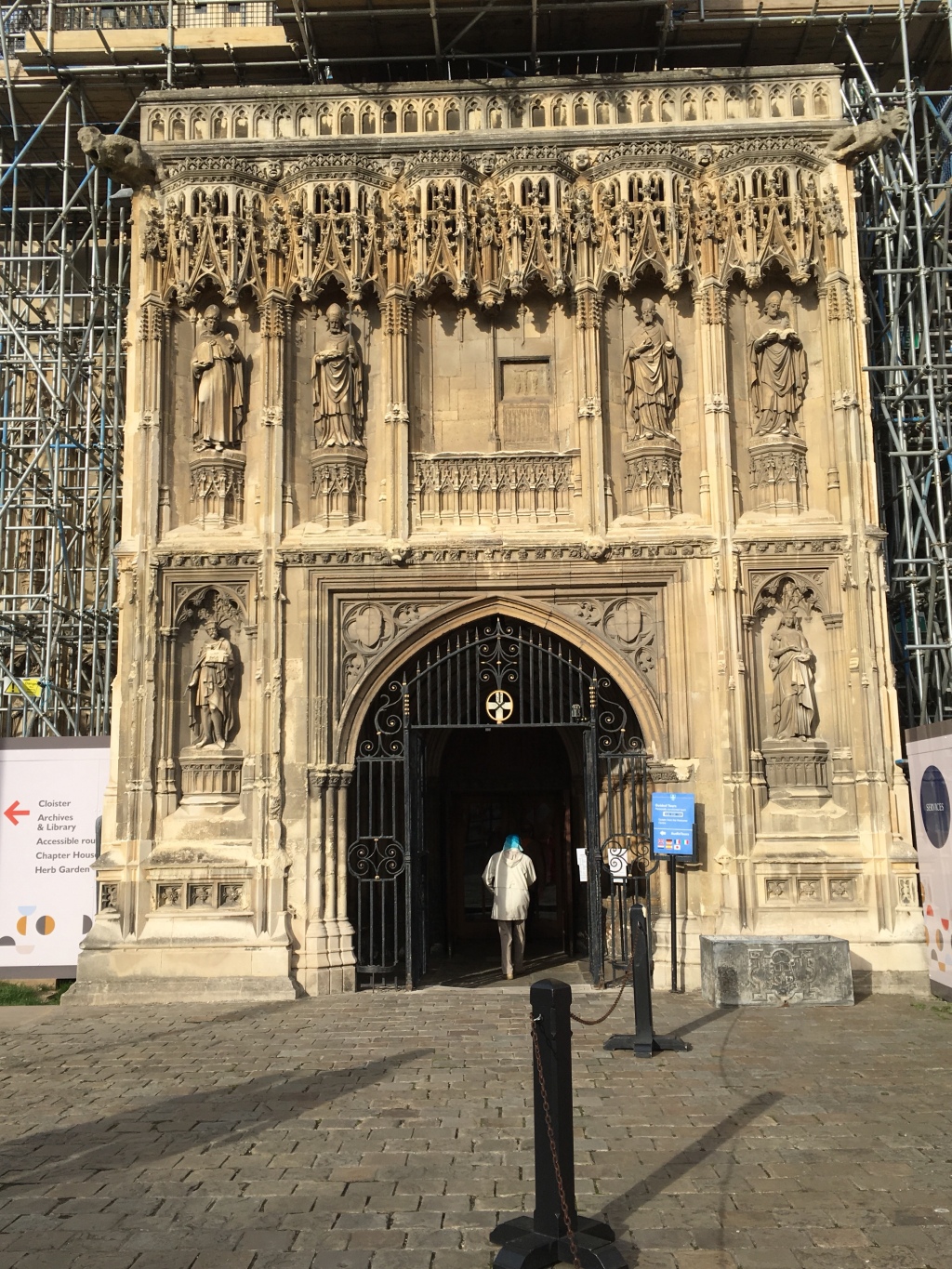 “Christ Gate,” the main gate to the Cathedral area. 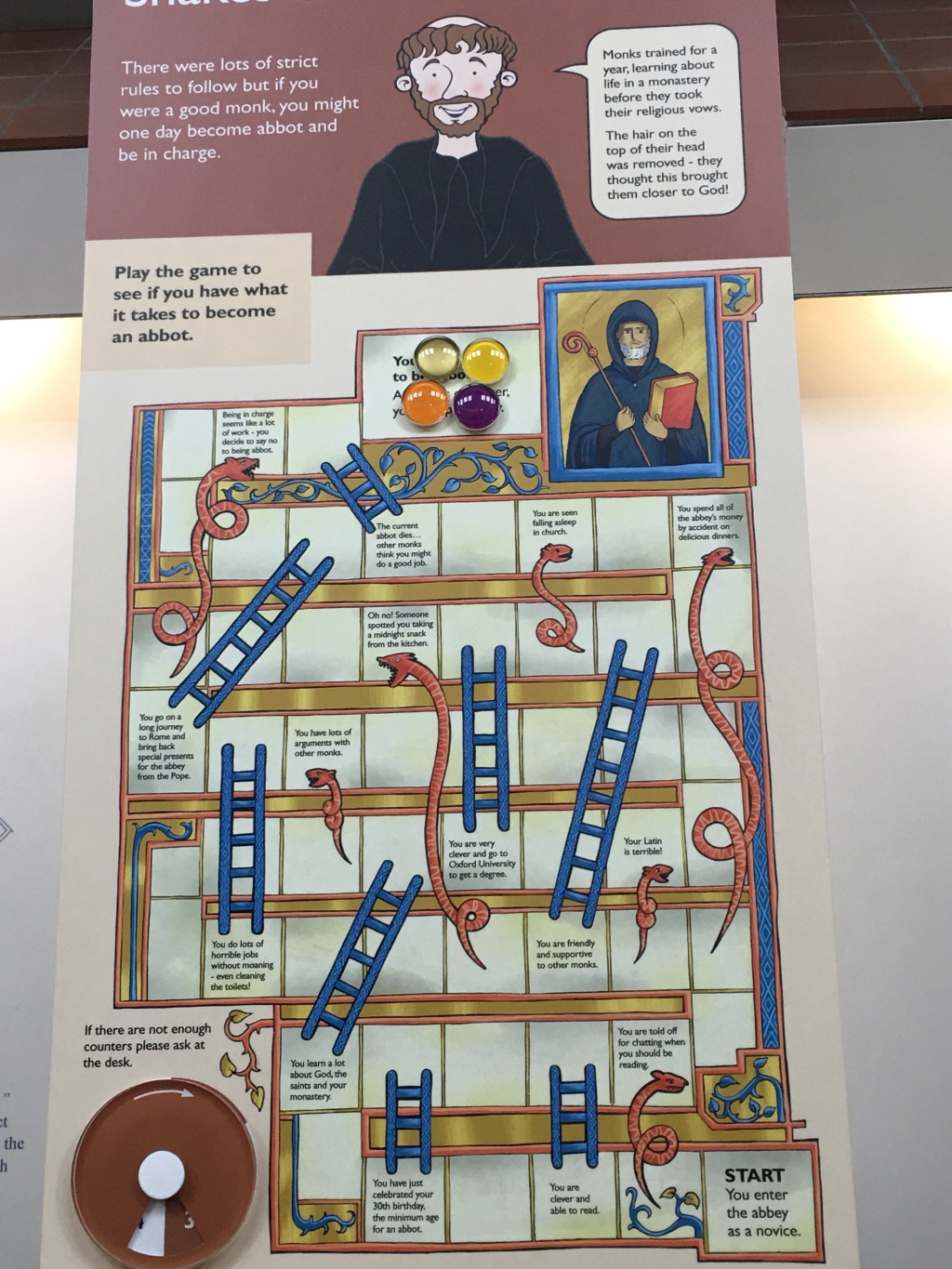 In St. Augustine’s Abbey display, there is a game of “Snakes and