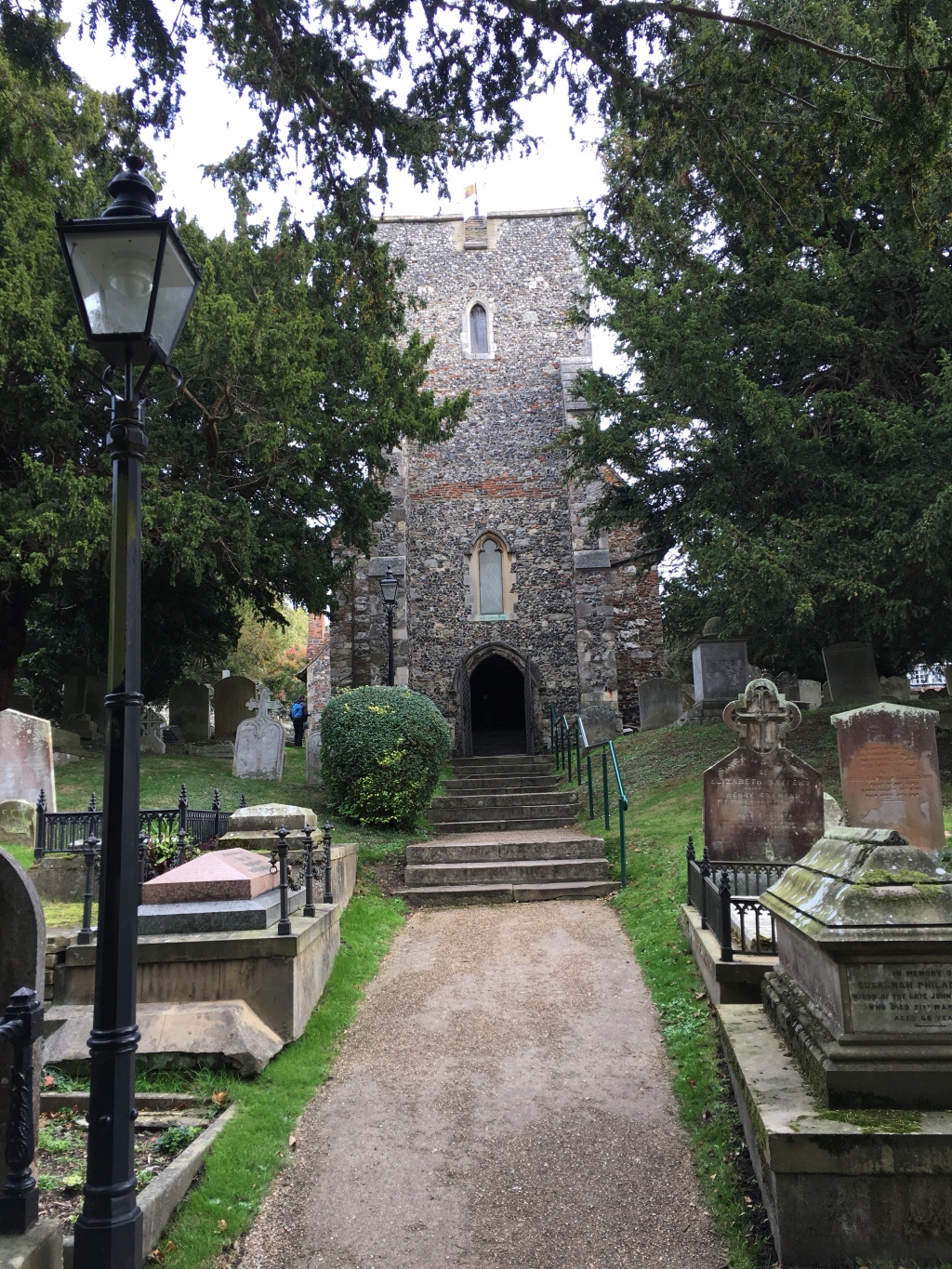 Midway during my two months of being “Grandma On Duty,” Olivia and I went to England to visit her mom. After Andrew arrived, we were all there in Bean, Kent, England, when Katie arrived, too!

Sarah and Katie were the main focus, but partway through our visit, I took the train from Bean to Canterbury, also in Kent. The Archbishop of Canterbury is the head of the Anglican or Episcopal Churches throughout the world. That the little village of Canterbury would become the center of the Church was really a fluke of history. It’s importance helped make it part of the Canterbury World Heritage site.

St. Martin’s in Canterbury is the oldest continuing parish in the English-speaking world, established in 580 A.D. The building is older, built by the Romans during the 4th century A.D. It was given to Queen Bertha by King Ethelbert of Kent. The 580 A.D. marriage arrangement allowed Bertha to continue to be a Christian and to bring her own priest with her. Queen Bertha named it in honor of St. Martin of Tours, who lived in the 4th century A.D.  Martin was a Roman soldier who later became the Bishop of Tours, France, the birthplace of Queen Bertha.

King Ethelbert converted to Christianity, and requested that Pope Gregory (the Great) send missionaries to Kent. Because of the Queen’s Christianity, her family’s Christianity, and the King’s conversion, the Pope sensed an excellent opportunity for Christianity in England. He sent Augustine and other monks to Canterbury, where they established a parish at St. Martin’s. Augustine became the first Archbishop of England, founded what is known as St. Augustine’s Abbey, and Canterbury Cathedral. It would be another thousand years before it became the Church of England under Henry VIII.

The original Roman building was tiny, and has been enlarged twice. The first addition was by St. Augustine and his monks, and is the largest part of the church. It also was the first Anglo-Saxon structure to use mortared brick and stone instead of wood. The second addition, the expanded entry, also stone, was later. It is an elegant church, and still very little, even with the additions.

St. Martin’s stands in testimony that faith helps many as we struggle to be better human beings. I was raised in the Episcopal Church (American,) however, I can hardly count myself among the earnestly faithful. I am jealous sometimes of those who have the faith, whether it is Episcopal, Catholic, Protestant, Jewish, Muslim, Buddhist, or any of the others. It must be nice to have some certainty about life, how to live it, the end of life, and the next life. I have explored different faiths in the past, and I continue to be interested in past and contemporary faiths, which is what leads me to visit these churches, synagogues, mosques, and other houses of the faithful.