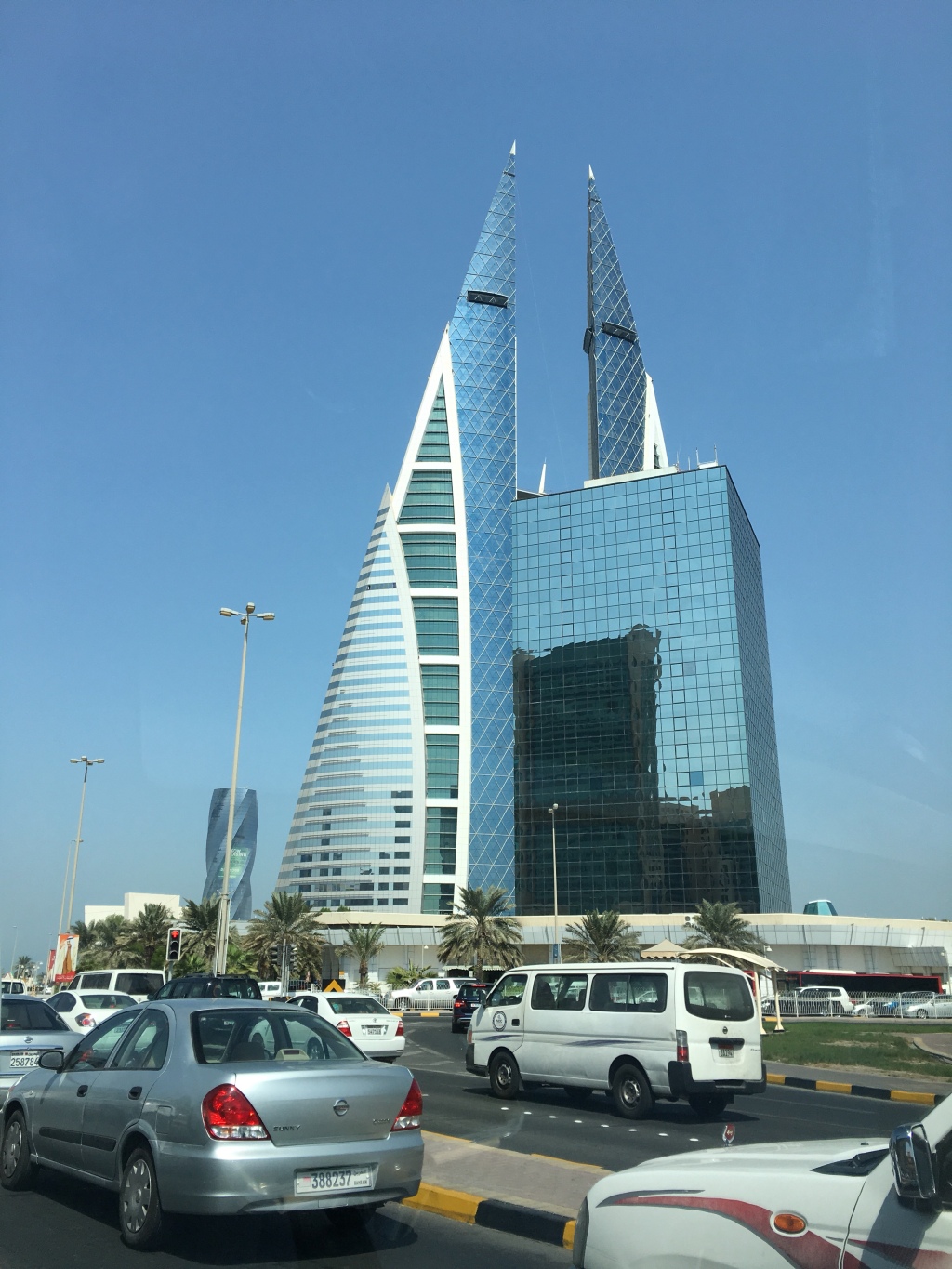 This spring, my daughter Sarah called. She and Andrew were going to have a new daughter in November. Sarah was going to have the baby in England, for a variety of reasons, and would I like to come to Bahrain to take care of Olivia (my granddaughter) during October and November? Otherwise, Olivia would miss two months of school. That’s how my “year of transition” became “nine months of transition.” And that’s how Bahrain became the launching point for this nomadic chapter of my life.

Bahrain is an island country in the Gulf of Arabia, attached to the Arabian Peninsula by a causeway to Saudi Arabia. The Kingdom of Bahrain is one of the newest democracies in the world. In 2002, after a referendum endorsing his National Action Charter, Shaikh Hamad bin Isa Al Khalifa pronounced Bahrain a constitutional monarchy and changed his status from Amir to King. All Bahraini citizens can vote, regardless of gender, for members of the Chamber of Deputies.

Bahrain is a desert country, and it was beastly hot when I arrived at the end of September. When I checked the Weather Channel in August, the then-current temperature was 104 degrees Fahrenheit, but “felt like” 130 degrees. When I arrived, it felt like 104 degrees, still hot. High humidity in the summer is the culprit, and air conditioning is universal and powerful.

Guidebooks will tell you that the best time to visit is from October through April or May, and they are right. I would even recommend November. Most days are mild and sunny, although it actually rained one day! Enough to want an umbrella!

Sarah and Andrew are currently a part of the ex-patriate population in Bahrain, “ex-patriate” being a person living in a country that is not their country of citizenship. It is a large group – about 600,000 according to a recent Bahraini newspaper article, and whatever percentage of them are readers of the Business Insider magazine, they recently voted Bahrain the No. 1 rank among ex-patriate locations. The “ex-pats” I have met are from the U.K., Australia, China, France, and Lebanon. We are the only Americans. Many of the domestic workers, taxi drivers, and maintenance workers seem to be from the Philippines, Bangladesh, Pakistan, Sudan, or Ethiopia. Most often, people in these jobs are individuals employed in Bahrain who are sending money home to their families.

Ex-pat families tend to choose schools conducted in their native language – English, French, and Hindi, are the schools I have seen. Olivia goes to a private English school in Bahrain, modeled on the British public school system. Olivia, five years old, is in Year One, and was assigned a “house,” even though it is not a boarding school. She wears her house shirt on specified days. Most days, she wears her school uniform, as do all students.

The school administration is distinctly British, but the students are from all over the world, including a significant number of Bahrainis. The school has special days that are devoted to the cultures represented by their students, demonstrating dress, language, and foods, as a way of promoting understanding. This includes a school-wide day showcasing their host country, the Kingdom of Bahrain and Arab culture.

Even so, there is not a lot of socializing between ex-pats and Bahrainis. Ex-pats bring a variety of cultures, but they have one thing in common – they do not share the deep roots of native Bahrainis, and so the ex-pats tend to coalesce into their own groups that change as people come and go. Parents of school-age children build their social network around their children, their classmates, and their classmates’ parents who are ex-pats. Those parents who work socialize with their co-workers who are also ex-pats. For those who desire a larger social circle, there are organizations whose task is to provide the opportunity to meet other ex-pats. Being an ex-pat is like being the new kid in town, but never becoming part of the town, and the empathy among ex-pats is strong.

My main task these past few weeks was taking care of Olivia, but in October, we traveled to England so Olivia could visit her Mom. I will take you there in our next column, followed by Oman, which is where I am right now.